As Turkey's military campaign in Kurdistan Region of Iraq has intensified in the last two weeks, an international peace delegation led by Progressive International visited the KRI to meet with officials of political parties.

Progressive International* released a statement of solidarity with the Kurdish struggle for freedom and peace as the Turkish military has intensified its attacks in Kurdistan Region of Iraq (KRI) and northern Syria.

“In the face of Turkey’s decades-long war on the Kurds and its recent intensification, the Progressive International stands in support of the Kurdish struggle for freedom and peace. That is why, at the invitation of the Kurdish groups, the Progressive International has dispatched a peace delegation to Hewlêr/Erbil to ring the alarm about Turkey’s all-out war against the Kurdish people and other faith and religious communities in the region – and NATO’s complicity in it.”

“Our commitment is spelled out in the Article XV of the Declaration of the Progressive International: lasting peace. ‘We work to dismantle the war machine, and replace it with a diplomacy of peoples based on cooperation and coexistence.’ Our delegation lands in Hewlêr (Erbil) to fulfill this mission.”

Pointing out that Turkish president Recep Tayyip Erdoğan “hopes that a war against the Kurdish people can fuel nationalist sentiment that will keep his presidential prospects alive”, the group criticised Western states for their silence on Turkey’s policy of violence.

“It is NATO’s expansion that has given a green light to Erdoğan’s new offensive. With Sweden and Finland submitting applications to the alliance, Turkey has called for the lifting of an arms embargo and the extradition of Kurds in exchange for NATO accession. Meanwhile, NATO members in Europe and North America have been almost completely silent about Erdoğan’s escalating violence.”

“In the face of Erdogan’s intensified war on the Kurdish people, I stand in solidarity with the Kurdish struggle for freedom and dignity.
It’s time to build a global peace movement to dismantle the war machine.”

The Official International Committee of the Democratic Socialists of America also shared a message of support:

“We join @ProgIntl in condemning Turkey’s aggression against the Kurdish people and other minority communities, and US & NATO’s support for this latest assault.”

An international peace delegation consisting of policy observers, NGO representatives, intellectuals and political figures, including Progressive International’s spokesperson Daniel Kopp, met with officials of political parties in the KRI on Monday and Tuesday. 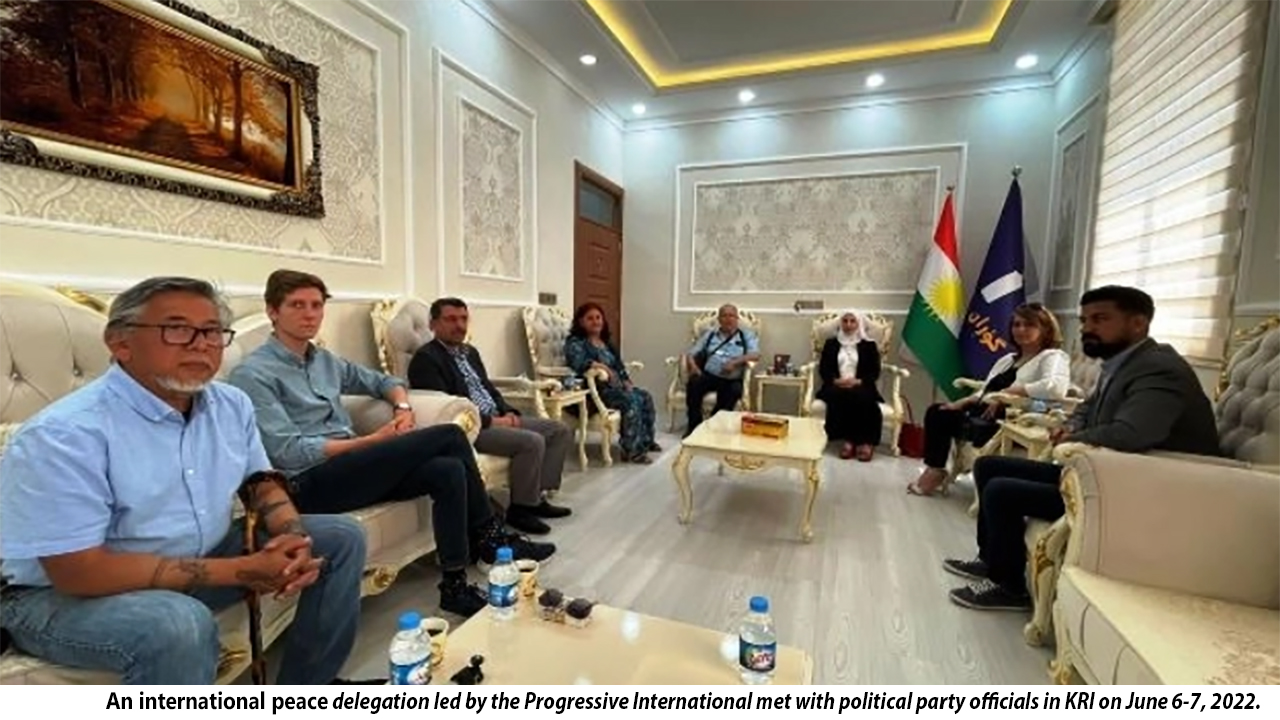 Dr. Salar Basir, a member of the delegation, told Roj News that while officials of the Goran Movement were clear about the need to take a determined stance against Turkey’s attacks, the officials of the Kurdistan Democratic Party (KDP) and the Patriotic Union of Kurdistan (PUK) were not.

Dr. Basir noted that the KDP officials held the Kurdistan Workers’ Party (PKK) responsible for Turkey’s attacks and said that there would be no Turkish attack if there were not a PKK presence in the region.

* The Progressive International is an international organisation uniting and mobilising left-wing activists and organisations, founded in 2018 by Bernie Sanders and Yanis Varoufakis. Their motto is ‘Internationalism or extinction’.