Flashback: 2022 for the Kurds – spotlight on North and East Syria

With a fresh attack being mooted at the close of 2022, NES is likely to remain the focus of Turkish aggression and political discourse going into the New Year, even as it faces major health, humanitarian and infrastructure challenges. Here’s what 2022 held:

Following our looks at domestic, regional and international issues surrounding the Kurds in 2022, our final flashback summarising the year’s events puts the spotlight on the Kurdish-led polity in North and East Syria, where the multiethnic Autonomous Administration has suffered repeated threatened and actual attacks by the Turkish Armed Forces.

With a fresh attack being mooted at the close of 2022, NES is likely to remain the focus of Turkish aggression and political discourse going into the New Year, even as it faces major health, humanitarian and infrastructure challenges. Here’s what 2022 held: 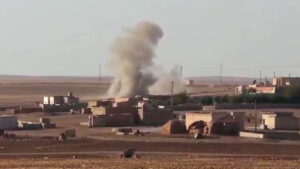 Turkey conducted over 80 air strikes against Kurdish-led North and East Syria throughout the year, according to data provided by the Rojava Information Centre, killing scores of civilians. November then saw a further wave of deadly airstrikes mobilising some 80 aircraft and killing at least 25 people, conducted in response to a bombing in Istanbul which Turkey used as the casus belli to seek the green-light for a fresh ground invasion of NES. (In reality, evidence is mounting to indicate the attacker has no links whatsoever to the Kurdish movement.)

According to the Syrian Democratic Forces, Turkey attacked North and East Syria 17,596 times throughout 2022. A total of 59 civilians, including 12 children and five women, lost their lives in these attacks; 263 civilians were injured. Notably, Turkey killed five teenage girls in one targeted airstrike against their education facility, in addition to multiple members of the all-female People’s Protection Units (YPJ) and other senior figures in the fight against ISIS. Civilian and political leaders were also assassinated, while prominent figures like a poet and an 80-year-old activist were also targeted in strikes. 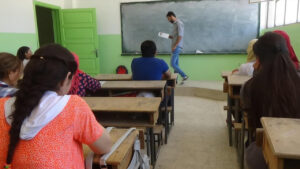 Schools, hospitals, water infrastructure, power stations and other key infrastructure were also targeted. An airstrike close to US forces working alongside the Kurdish-led Syrian Democratic Forces, prompting an angry response from the USA. 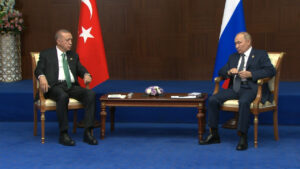 Turkey continued to aggressively seek the greenlight for a fresh ground invasion of the Kurdish-led autonomous regions united under the banner of the Autonomous Administration of North and East Syria (AANES), with these efforts coming to a peak in spring and again at the end of the year following the Taksim bombing.

The US and Russia have both publicly opposed Turkey’s attempts to seize more territory in the north of the country, but at the close of 2022 Turkey continues to threaten a military operation and to seek an accommodation with either power bloc to that end. This has also included publicly seeking reconciliation with Damascus, with Erdoğan speaking out to invite open meetings with Syrian President Bashar al-Assad. 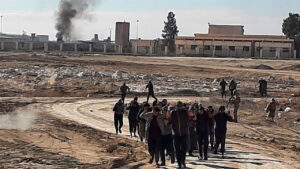 At the start of the year, ISIS members being held in the Ghweiran detention facility in Heseke, North and East Syria, staged a mass breakout resulting in thousands displaces and 4 civilians killed.

The start of the year brought a fresh, major crisis in the ongoing war against the ISIS terror group. ISIS members being held in the Ghweiran detention facility in Heseke, North and East Syria, staged a mass breakout, beginning with a couple car-bombing and an armed attack by scores of gunmen. 45,000 people were displaced, at least four civilians were killed including one decapitated by ISIS, at least 250 ISIS members lost their lives and over 1000 ISIS members were recaptured.

The region’s representatives alleged that the attack was partially staged via Turkish-occupied regions of NES, and warned that Turkey was actively seeking to destabilise the region by facilitating ISIS’ activities. 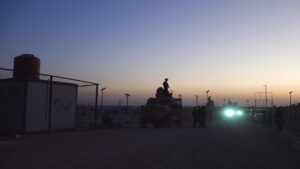 Turkey’s military operations twice forced the Kurdish-led Syrian Democratic Forces to bring a halt to their operations against ISIS, conducted in coordination with the US-Led International Coalition to Defeat ISIS. An airstrike near Hol Camp allowed some ISIS members to attempt escape.

Meanwhile, airstrikes carried out by the International Coalition to Defeat ISIS have continued to target top ISIS commanders being sheltered in regions of Turkish occupation in northern Syria, seized from the SDF in successive military operations in 2018 and 2019. The region’s military and political commanders continue to warn that a fresh Turkish invasion will spell disaster for the effort to secure an enduring defeat of ISIS. 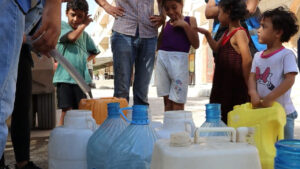 The Kurdish-led autonomous regions continued to face challenges throughout 2022, as Turkey continued to cut off the water supply from the Alouk water station and reduce the water flow into the crucial Euphrates river, contributing to a cholera outbreak with tens of thousands of cases throughout NES.

Elsewhere, the isolated Shehba region – populated by IDPs who fled the 2018 invasion of the Afrin region – and the Kurdish Sheikh Maqsoud district of Aleppo continued to suffer repeated embargos imposed by Syrian regime forces. The region is also suffering runaway inflation, in common with the rest of Syria, with the Syrian lira depreciating fourfold in value in a matter of weeks.