Flashback: 2022 for the Kurds – Regional repression with global consequences

In the second of our three flashback articles, we expand the focus from domestic issues in Turkey to take a look at how President Erdoğan’s anti-Kurdish politics have spilled over into neighbouring countries, along with the actions of states like Iran which have also marked 2022 with the aggressive repression of Kurdish protest and opposition to their governance.

In the second of our three flashback articles, we expand the focus from domestic issues in Turkey to take a look at how President Erdoğan’s anti-Kurdish politics have spilled over into neighbouring countries, along with the actions of states like Iran which have also marked 2022 with the aggressive repression of Kurdish protest and opposition to their governance.

Allegations of chemical weapons usage and waves of airstrikes have brought misery to Kurdish regions, while December of this year also saw a deadly armed attack against Kurds in the heart of Europe.

Kurds at heart of Iranian uprising 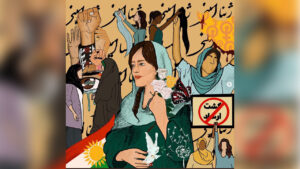 The Kurds this year once again made global headlines as a result of the uprisings in Iran following the death of Kurdish woman, Jina (Mahsa) Amini, at the hands of Iranian state security forces. The resulting protests, now in their fourth month, were led from the outset in Iranian-occupied Kurdistan (Rojhilat) by Iranian Kurds, and prominently feature the Kurdish slogan ‘Jin, Jiyan, Azadî’, or ‘Women, Life, Freedom’. At the time of writing, around 476 protesters have been killed, while around 100 are facing execution.

The ramifications of the uprising have not been limited to Iran. Turkey is planning to extradite Kurdish activists to Iran, where they may face the death penalty. Meanwhile, Iran launched cross-border attacks targeting Kurdish Iranian opposition groups based in northern Iraq, sparking suspicions of coordination with the Turkish authorities then bombing other Kurdish groups elsewhere in the region. 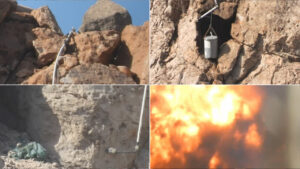 Allegations of Turkish chemical weapons usage in Iraqi Kurdistan have continued, with footage appearing to show multiple members of the Kurdistan Worker’s Party (PKK) suffering the after-effects of chemical gas. Images of gas canisters have also appeared online, amid calls for an international inquiry into the invasion, as the PKK allege thousands of usage of banned substances throughout 2022. However, Turkey has blocked all investigations into the issue. 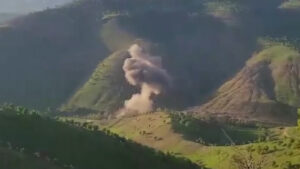 Turkey’s destructive invasions of Iraqi Kurdistan in pursuit of the PKK continued, seeing scores of Turkish bases established in the north of the country and the displacement of local civilians as Turkey launched a fresh operation in April 2022. Turkish forces deployed artillery, fighter jets and chemical weapons as part of what they dubbed operations ‘Claw Tiger’ and ‘Claw Lightning’, but have struggled to make significant territorial gains. The invasion was decried by Baghdad, as well as Kurdish representatives and international watchdogs, for destabilizing the region.

Turkey has also used airstrikes deep within federal Iraqi territory, penetrating as far as Mosul, some 175 miles from the Turkish border. Both sides in the conflict reported conflicting casualty figures, with the PKK’s armed wing claiming a Turkish retreat in December 2022. Turkish attacks repeatedly killed local civilians, including an airstrike in July which killed 9 people at a tourist resort in the region.

The Kurdistan Democratic Party (KDP), which dominates political life in Iraqi Kurdistan, was accused of aiding and abetting the invasion by providing logistical, intelligence and ground support to enable Turkey to support its scores of bases in the region. 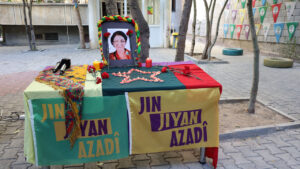 Nagihan Arkarsel, a prominent Kurdish feminist, was shot dead in the streets of Sulaymaniyah in Iraqi Kurdistan.

The Maxkhmour refugee camp in Iraq and the Yazidi homeland of Sinjar (Shengal), site of ISIS’ 2014 genocide against the embattled religious minority, both suffered repeated Turkish airstrikes throughout the year. Nagihan Arkarsel, a prominent Kurdish feminist, was also shot dead in the streets of Sulaymaniyah in Iraqi Kurdistan.

Turkey was able to use the conflict in Ukraine to its advantage, exercising its veto as the second-largest army in the NATO security alliance to block Finland and Sweden’s accession unless they accepted a string of concessions, including the extradition of Kurdish politicians and activists to face trial in Turkey; re-opened arms sales; and even the extradition of an Iranian Kurdish MP with no links to Turkey. 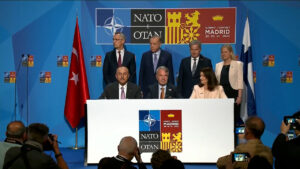 Turkey used its veto as the second-largest army in the NATO to block Finland and Sweden’s accession unless they accepted Turkey’s demands to extradite Kurdish politicians and activists, and re-open arms sales.

However, Turkey has also been called to task for harbouring Russian oligarchs and capital, and failing to align with the West by opposing the Russian invasion of Ukraine, for example by failing to comply with EU sanctions on Moscow. Elsewhere, Turkish expansionism and sabre-rattling in the Eastern Mediterranean has provoked repeated outcry by the Greek authorities. 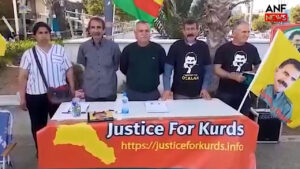 1003 international figures across 30 countries united to launch a campaign demanding that the Kurdistan Worker’s Party (PKK) be removed from terror lists, along with a signature campaign which garnered millions of responses.

Calls for the party’s automatic inclusion on international terror lists have reached the British Parliament and been debated by other national bodies, while 2022 also saw a hearing over the PKK’s status as a terror group in the European Court of Justice. The calls follow a landmark decision by the Belgian Court of Cassation finding the PKK could not be considered a terror organistion, but rather a legitimate participant in a civil conflict. 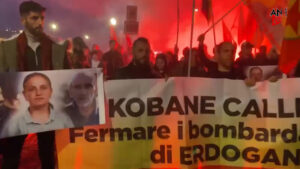 At the close of 2022, an armed attack took place against the Ahmet Kaya Kurdish Cultural Centre in Paris. Prominent female Kurdish figurehead Evin Goyi, exiled Kurdish musician Mir Perwer, and life-long Kurdish activist Abdurraman Kizil were shot dead by a French man in a racist attack which the French Kurdish community sees as proof they are not being protected by the French authorities.

The attack follows a 2013 killing of three female Kurdish activists in the same district, with local spokespeople alleging that though the Kurdish movement was able to defeat ISIS following their deadly attack on a concert and other locations in Paris in 2015, the French government continues to allow Turkey free rein to assault the Kurds and their political representatives.