Erdoğan’s train to autocracy: a commentary on varieties of democracy studies – 2

This commentary will only briefly discuss how the Report specifically defines liberal democracy: the Liberal Democracy Index (LDI) “combines the electoral ‘core’ institutions with the liberal aspects—executive constraint by the legislature and high courts, and rule of law and individual rights” (p. 13). It maintains that “this measure is among the most sophisticated measures that the Varieties of Democracy Study (V-Dem) offers” (p. 13), and is “one of its most nuanced products” (p. 14). “To be considered minimally democratic, i.e. an electoral democracy, a country has to meet sufficiently high levels of free and fair elections, as well as universal suffrage, freedom of expression and association. Hence, solely holding elections [as Turkey still does today], does not suffice for a country to be considered democratic” (p. 13). Thus, “countries in which liberal aspects (executive constraint by the legislature and high courts, rule of law and individual rights) are respected on top of the requirements of electoral democracy, are considered liberal democracies” (p, 13). Sadly, Turkey no longer qualifies by this eminent measure.

The report then categorizes four distinct regime types: Closed autocracies with no elections, electoral autocracies like Turkey without free and fair elections, electoral democracies that hold free and fair elections but still have severe shortcomings, and liberal democracies with appropriate checks and balances systems. Thus, despite its continuing veneer of democracy, Turkey now finds itself categorized as an “electoral autocracy” along with 59 other countries.

In the MENA (Middle East and North Africa) region, “Libya and Tunisia have advanced on the LDI compared to 2011” (p. 19). On the other hand, Turkey and Yemen represent “two autocratizers . . . in the region. In Turkey the process started in 2006 and is still developing for the worse” (p. 19). “Freedom of expression is the aspect of democracy undermined the most in autocratizing countries” (p. 20). In addition, notes the report, “authoritarian-minded leaders are especially prone to harassing and censoring the media” (p. 20). As already noted, “anti-pluralist parties are driving the autocratization in at least six of the top autocratizers—Brazil, Hungary, India, Poland, Serbia, and Turkey” (p. 23). The report goes on to state: “Anti-pluralist parties and their leaders lack commitment to the democratic process, disrespect fundamental minority rights, encourage demonization of political opponents, and accept political violence. These ruling parties tend to be nationalist-reactionary and have used government power to push forward autocratic agendas” (p. 23). Turkish President Erdoğan and his Justice and Development Party (AKP) could not be defined more precisely! 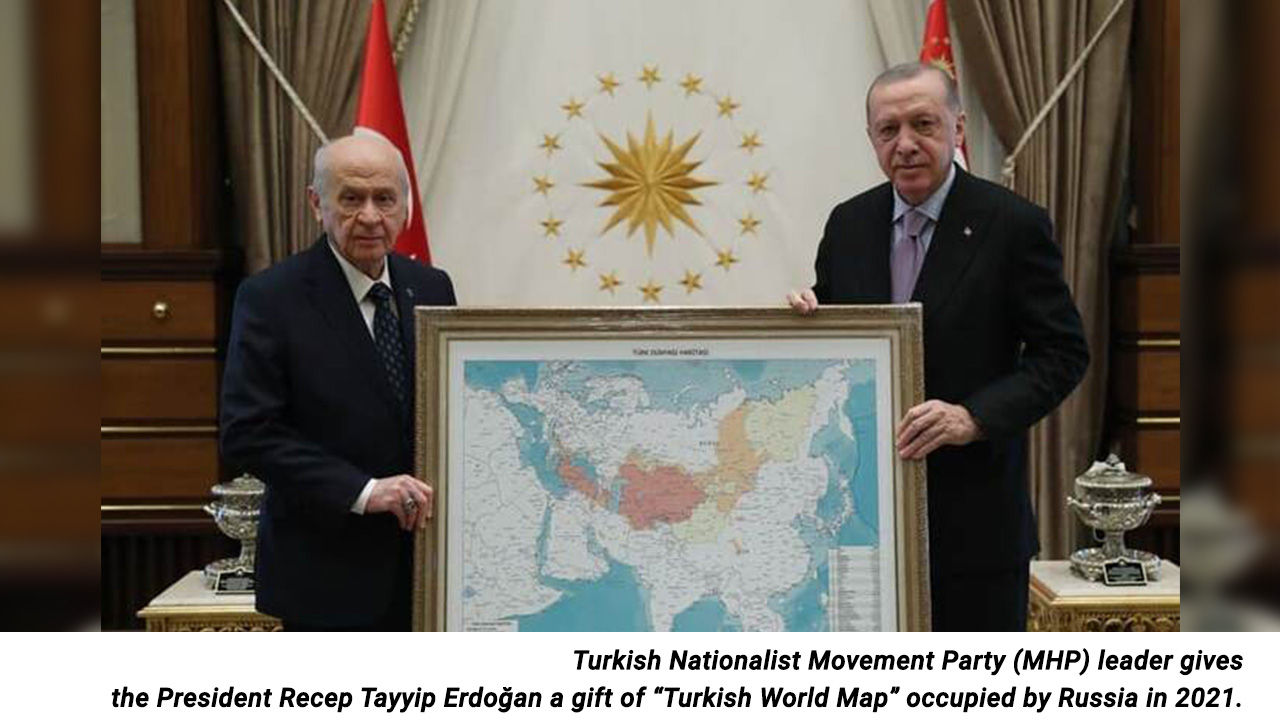 Polarization represents another major index detailed in the report. “Political polarization is a division of society into Us versus Them camps whose members hold negative views of and distrust the other group. When such camps align with mutually exclusive identities and interests, it undermines social cohesion and political stability. We speak of toxic polarization when levels of polarization are high and widely permeate and shape society” (p. 33).

Continuing, the report argues that “toxic polarization and autocratization tend to be mutually reinforcing. Extreme levels of polarization have detrimental effects on the democratic foundations of society. When polarization becomes toxic, different camps typically start questioning the moral legitimacy of other groups, viewing opposition as existential threats to a way of life or a nation” (p. 34). Turkey—along with Brazil, Hungary, Poland, and Serbia—are specifically listed here with the caveat that “when polarization develops to toxic levels, democracy is typically dismantled. . . . A rise in polarization is followed by a decrease on the LDI in all the top 5 autocratizing countries” (p. 33) just mentioned.

“Research demonstrates that citizens in highly polarized contexts are often willing to abandon democratic principles if it means that one’s own party is elected and that ‘the right’ decisions are made. Thus, toxic levels of polarization contribute to electoral victories of anti-pluralistic leaders and to empowering their agendas” (p. 34). Specifically reminding one of the Kurdish plight in Turkey, the report declares, “When anti-pluralist leaders assume office, their parties are likely to use rhetoric that is intended to insult, offend, or intimidate members of specific groups—usually minorities or political opponents. This increase in hate speech, in turn, can worsen toxic polarization and thereby create room for further autocratization” (pp. 33-34). The report also notes “toxic levels of political polarization developed in Turkey after President Recep Tayyip Erdoğan and the AKP came to power in 2002, arguably following the government’s will” (p. 34). Indeed, “it can be argued that toxic polarization functioned as a strategic tool to enable reforms and actions to break down democracy” (p. 34). 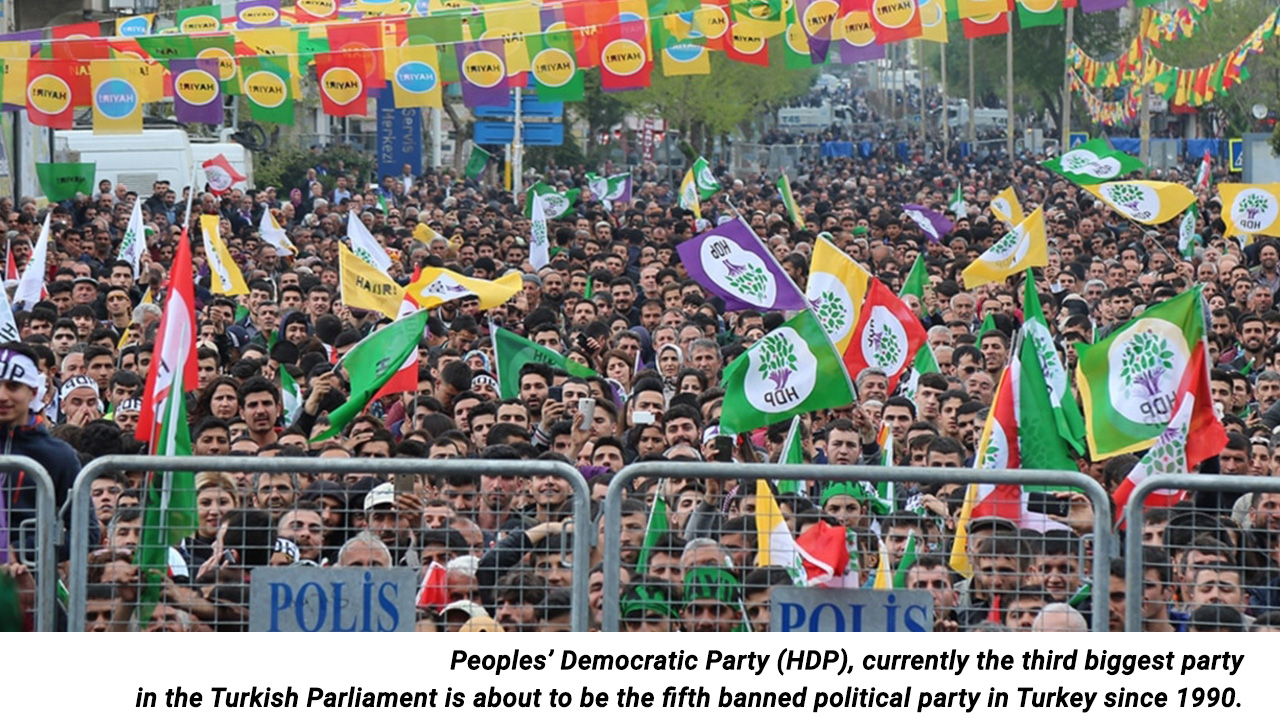 In closing, the report details several more indices of interest, all of which closely pertain to the Kurds. The Liberal Democracy Index (LDI)—already referred to above when its decline in Turkey during the past decade was noted – “captures both liberal and electoral aspects of democracy based on the 71 indicators included in the Liberal Component Index (LCI) and the Electoral Democracy Index (EDI). The EDI reflects a relatively ambitious idea of electoral democracy where a number of institutional features guarantee free and fair elections such as freedom of association and freedom of expression, among others. The LCI goes even further and captures the limits placed on governments in terms of two key aspects, the protection of individual liberties and the checks and balances between institutions” (p. 50). In addition, in a measurement particularly apropos to the Kurds, the LCI “embodies the importance of protecting individual and minority rights against both the tyranny of the state and the tyranny of the majority” (p. 52). Turkey ranks a lowly 152 and falling on the LCI index, and 131 and falling on the EDI index.

Continuing, the Egalitarian Component Index (ECI) “measures to what extent all social groups enjoy equal capabilities to participate in the political arena” (p. 53). Here Turkey does somewhat better, but still ranks a lowly 123 and falling. “The V-Dem Participatory Component Index (PCI) takes into account four important aspects of citizen participation both electoral and non-electoral: civil society organizations, mechanisms of direct democracy, and participation and representation through local and regional governments” (p. 54). On this measure Turkey ranks 131 and falling. Finally, The Deliberative Component Index (DCI) operationalizes that “there should also be respectable dialogue at all levels—from preference formation to final decision—among informed and competent participants who are open to persuasion” (p. 55). Here Turkey ranks a lowly 168 and falling.

Conclusions: The Varieties of Democracy (V-Dem) Report presents a sophisticated statistical, well-defined, multi-indexed series of rankings of the state of democracy in the world as of 2022. Unfortunately, the resulting report clearly illustrates “the world is facing a wave of autocratization. Powerful autocratic states, former democracies, and political movements within democracies increasingly present ideological challenges to the principles of democratic governance” (p. 40). Turkey sticks out as a poster-boy example of this negative phenomenon. Not only does it rank embarrassingly low on all indexes, but it also is flagged for continuing “falling” in all of them. Thus, “at this historical moment, the European Union has a unique position to take the lead, to gather its partners around the globe, and base on hard scientific evidence shape the future of democracy in the world” (p. 40).

Michael M. Gunter is a professor of political science at Tennessee Technological University[1] in Cookeville, Gunter has worked directly with top Kurdish and other Middle Eastern political leaders. He received the Kurdish Human Rights Watch’s “Service to the Kurds Award” in 1998.