Since September 16th, when Jina Amini died in prison in Iran, the media has intensely followed the ensuing protests. Watching as more than 300 protesters are announced dead from clashes with police, unknown thousands arrested and now two protesters given the death sentence and hanged, with more to surely follow. The brutality and negation of human rights is beyond question, so the question that has remained for all those watching this unfold is – What will be done? 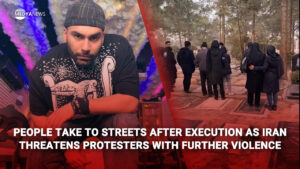 Mohsen Shekari was the first protester to be executed by the Iranian regime for his involvement in the protests following Jina Amini’s murder. He was hanged on December 8th.

Reactions from Iranian women, Kurdish and feminist groups were immediate and strong, their dedication to the memory of Amini and women’s rights unwavering. But the potential reactions of international powers, beyond a few words of sympathy here and there, was hard to predict.

This week has seen two steps taken to hold Iran accountable for what it did to Amini and what it continues to do to those who protest her murder. First, on December 12th, the Council of the European Union (EU) decided to enact new sanctions on Iran due to the human rights violations seen committed against protesters. Following this decision, 20 individuals and an entity will have their assests frozen, and an imposed travel ban to the EU.

Medya News previously reported on some individuals who have been sanctioned:

“The sanctions include the Islamic Republic of Iran Broadcasting (IRIB), which the EU describes as “a regime mouthpiece”, as well as the director, deputy director and some reporters of IRIB.
Also, Deputy Minister of Interior of Iran, the Commander-in-chief of the Iranian Army and some Islamic Revolutionary Guard Corps (IRGC) commanders from different regions.” EU High Representative for Foreign Affairs and Security Policy, Josep Borrel, was quoted as saying:

“We see it as unacceptable to use capital punishment as a tool to repress the protesters. In the new package of sanctions for human rights violations, we are targeting those who are responsible for the repression of protesters.”

Secondly, on December 14, the United Nations Economic and Social Council (ECOSOC) announced its new resolution to remove Iran from its Commission on the Status of Women (CSW). The CSW was established in 1946 and works to promote women’s rights and empowerment, and document the real situation of women around the world.

According to the United Nations (UN) website, this “development comes in the wake of the country’s brutal crackdown on protests calling for justice for Mahsa Amini, the 22-year-old woman who died in police custody in September.” 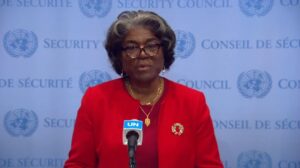 Linda Thomas-Greenfield, US Ambassador, referred to Iran’s membership of the UN Commission on the Status of Women (CSW) as an ‘ugly stain’ on the commission’s credibility.

The resolution was proposed by the United States and was well voted for by 29 of 54 voters in the commission. US Ambassador Linda Thomas-Greenfield referred to the CSW as the primary UN body for promoting women’s rights and stated that, “It cannot do its important work if it is being undermined from within… Iran’s membership at this moment is an ugly stain on the Commission’s credibility.” She continued to remember the travesties committed against Jina (Mahsa) Amini, claiming that Amini was ‘killed for the crime of being a woman,’ and praised the women, and all those involved in the Iranian protests for their courage and sacrifice.

Unsurprisingly, Iran’s Ambassador criticised and rejected the proposed removal of Iran, putting forth that the resolution was symbolic of the US’s hostility toward Iran, saying:

“It is not at all unexpected that the United States is taking such unlawful action against Iran, given its long-standing hostility towards the Iranian people, but if carried out, it would be exceedingly dangerous to the UN system integrity.”

These actions are not enough, violence against women and suppression against protesters in Iran have not ceased. But these steps which have been taken by the EU and UN speak to the immense dedication of the protesters, that they have nobly represented their cause and demanded the world recognize their situation. We must give credit where credit is due. Without the struggle and sacrifice of the men and women in Iran, we certainly would have seen no reaction against Iran’s abuses from a world which is too often blind to suffering.