On Wednesday December 7th, students from various Iranian universities composed and released a joint statement in solidarity with the on-going protests in Iran, which some people have been referring to as a ‘women’s revolution.’ 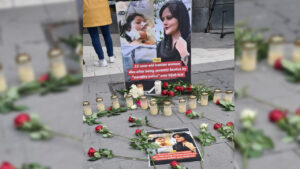 A shrine made for Jina (Mahsa) Amini, an Iranian Kurd who was murdered after being imprisoned for ‘improper’ wearing of a hijab. Since her death in September 2022, protests in Iran have been on-going.

This women’s revolution began on the 16th of September in 2022, sparked by the murder of Jina (Mahsa) Amini. Amini was arrested by the Iranian Morality police for supposedly violating the law by ‘improperly’ wearing her hijab. While in prison there was eye witness testimony and evidence that she had been severely beaten and mistreated. She died in custody in suspicious circumstances. This event was followed by many widespread protests across Iran and all the world.

These protests were met by repression, more police brutality, hundreds of deaths and a startling number of arrests.

The protesters, most of them women, who have been imprisoned have suffered dreadful conditions and mistreatment while in prison, as reported by human rights activist Atena Daemi.

The occasion of the aforementioned statement was to mark ‘Student’s Day.’ Student’s Day is held every year in Iran on December 7th, because it is the anniversary of the murder of three university students in Tehran in 1953. The three students were killed at the hands of Iranian police while protesting an official visit of Richard Nixon who was Vice President of the United States at the time.

This day is commemorated every year by student strikes and protests, and this year, protesting students connected their struggle and their day with Jina Amini and the women’s revolt in Iran. The joint statement was signed by 16 different universities and student organizations. According to Iranian political analyst Ali Afshari, the universities of Iran have now become a hub of protest and political action. He said:

“The driving force behind the protests is now universities, which are providing the fuel for the survival of the protest movement.” 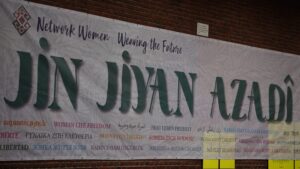 The phrase Jîn, Jîyan, Azadi (women, life, freedom) was used in the Student’s Day protests after being popularized by the Amini protests, but has in origin in the history of Kurdish struggle.

The joint statement begins by using the Kurdish slogan which has been popularized by the Iranian protests – Jin, Jiyan, Azadi which translates to Women, Life, Freedom.

“Our revolution, a revolution for women, life and freedom!

This year on December 7th, we are much closer to our goals than ever!

We students are not apart from the revolution for the right to a human, prosperous and happy life for all, for the unconditional freedom of expression, for the destruction of gender apartheid and for the complete elimination of discrimination and inequalities at all levels. From the very beginning until today, we have firmly stood with other revolutionaries of the country in full support of people’s great revolution against the Islamic Republic. The mutual support of the general public and students and their involvement in the creation and advancement of this revolution is a testimony to this.”

The statement continues to say that the very nature of student’s day, has now changed. That is now not only for students, but is connected and is a continuation for all liberation struggles, in particular the women’s protests begun by the murder of Amini.

“Unlike previous years, December 7th is not just a students day this year! Rather, in the continuation of our revolution, the three days leading to students’ day this year witnessed nationwide strikes and protests in the whole society. December 7th of this year for us is a day to demand justice for those who have lost their lives so far, to give practical and nationwide support to the strikes of the truck drivers and workers in main industrial centers and to extend the strikes and protests to all universities and schools. Schools whose students, like Nika and Sarina, were killed by the government of executioners and criminals, and universities whose students, like Aylars and Hamidrezas, were killed or are in prison in hundreds.”

Here, the statement mentions protesters who have been killed or imprisoned by Iranian authorities such as 16-year-old Nika Shahkarami, who went missing after being filmed burning her hijab, or Aylar Haghi, the 22-year-old woman who was directly shot by Iranian security forces.

The students involved in the statement have also included a call to action for all universities and all students across the country to join the struggle.

“We invite students from all over the country to join hands to organize daily and nationwide struggle against the child-killing, cruel and misogynist government of the Islamic Republic, which has nothing in common with our lives and aspirations. We also call the whole society, especially the workers, teachers, professors, medical staff, students, drivers, popular artists and merchants to join the nationwide strikes and protests and help to stop the government’s oppression machine.”

The statement concludes with a clear call for revolution:

“We are at a point in history where if we want our society to be a bit better than the day before, we have only one solution and that is “revolution”.

We need this nationwide unity in order to be triumphant in our revolution for “women, life and freedom”!

No to forced headscarf, no to oppression! Yes to freedom and equality!”

The full statement can be read here.