Calling for a Women’s Revolution in the 21st century

The Kurdish women’s freedom struggle is nothing if not ambitious. Under the name Network Women Weaving the Future, it organised a conference of nearly 800 women from around the world calling for the establishment of Women’s World Democratic Confederalism, basically an extension of the Rojava revolution around the world.

The conference took place in Berlin in the first weekend of November. Food was provided for free and those who could not afford accommodation were put up with Kurdish families, a heart-warming Kurdish tradition and a practice not seen in the British women’s movement since the early days of Women’s Liberation in the 70s and 80s. 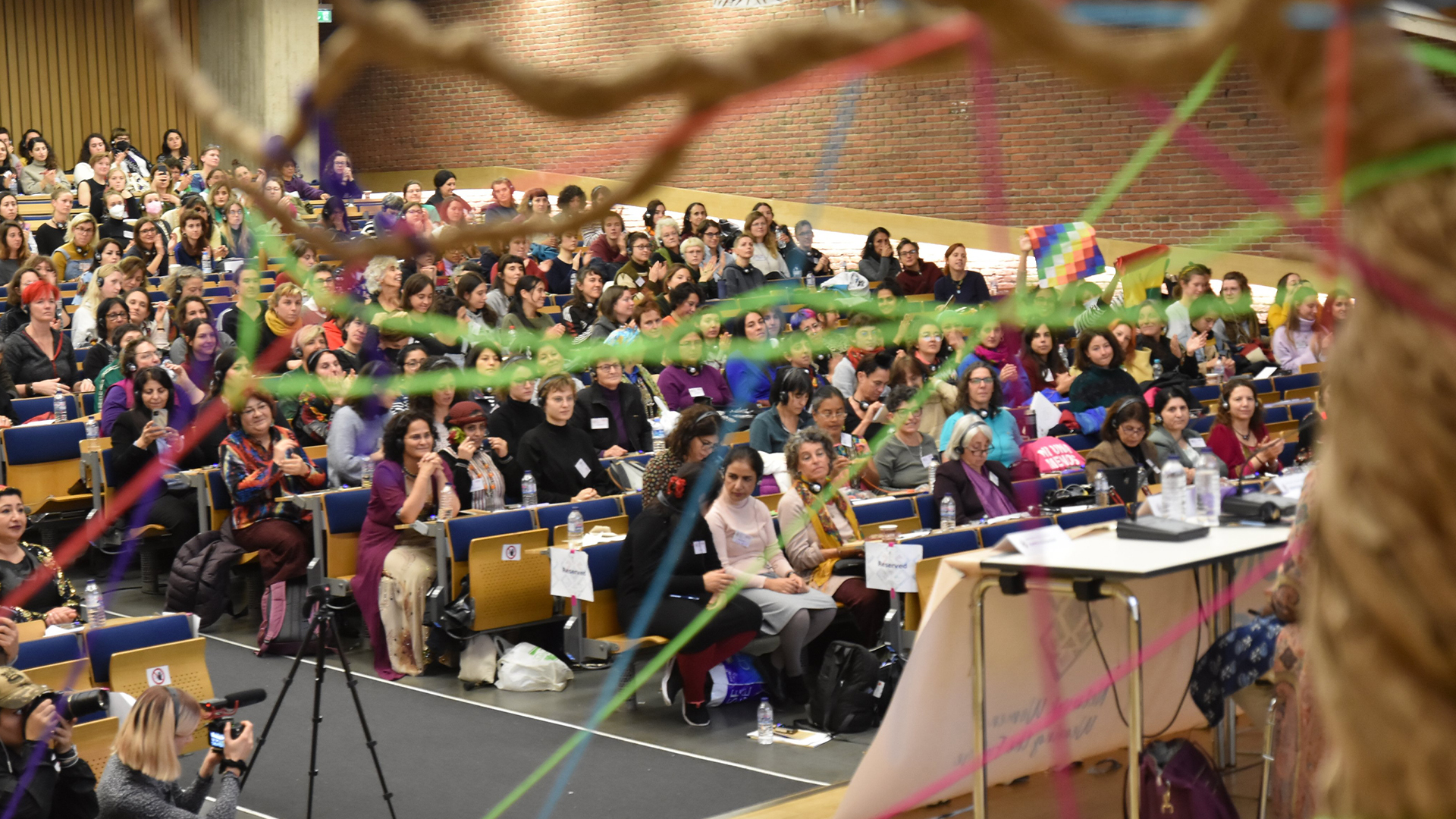 This tree with its colorful threads interwoven into its branches stands for the connectedness of women’s struggles in all different parts of the world.

The conference began with a symbolic ceremony which celebrated the interconnectedness of the struggles and resistance of the women of the world. Five of the speakers who were attending – from India, Guatemala, Australia, Syria and Yemen – stood on the stage and handed out skeins of red and green wool to the audience which made their intertwined way around the hall before being returned to the stage and tied to a sculpted tree of life. Kurdish women have a unique capacity for art and analysis, for dance and discussion, for revelry and revolution, for sacrifice and self-development. It speaks to the artist and activist in me.

Speaker after speaker paid tribute to the Kurdish women who have laid down their lives for the revolution, with the most recent loss of Nagihan Akarsel being uppermost in people’s minds. The hall resounded with cries of ‘Jin, Jiyan, Azadi’, a Kurdish women’s slogan that has acquired universal name recognition as a result of the protests in Iran. Reflecting its international composition, the hall also erupted with, ‘Ni una mujer menos, ni una muerte más.’ (Not one woman less, not one more death).

Breaking with the trend in most conferences which offer extensive choice to participants in the number of parallel discussions, dare I say it in deference to neoliberal influences, Kurdish conferences are based around consecutive single mammoth meetings, between 2 and a half to 3 hours long, attended by all. One session was devoted to breakout workshops in which women with particular expertise and interest took part and came up with practical recommendations on how to take the work forward. A series of parallel workshops drilled down into subjects such as resisting forced migration, women’s liberation, health, economy, ecology, education, building an antifascist front and defending language and culture.

The conference was well-designed, taking us on an intellectual journey from an analysis of the current state of patriarchy and capitalism, to an examination of the forces that fragment women’s unity, the importance of understanding the situation accurately through the production of our own knowledge and theoretical base in order to build towards a life of freedom, ending in the grand finale in which Kurdish women presented their proposal for turning the 21st century into an era of women’s revolution.

The first session, World War III and Smashing the Armor of Immunity of the State and the Dominant-Male, moderated by Meghan Bodette, Director of Research, Kurdish Peace Institute, focussed on an analysis of the patriarchal assault on women in the age of war, occupations, ecological crises and pandemics. Nilüfer Koç, member of the Kurdish National Congress, Mariam Rawi, representative of RAWA (Revolutionary Association of the Women of Afghanistan), Lolita Chavez of Feministas Abya Yala, Guatemala, Ariel Salleh, sociologist and eco-feminist from Australia, Genevieve Vaughan, peace activist, feminist and philanthropist and Kavita Krishnan, member of the All India Progressive Women’s Association addressed questions of state violence, ecocide and women’s invisible labour. 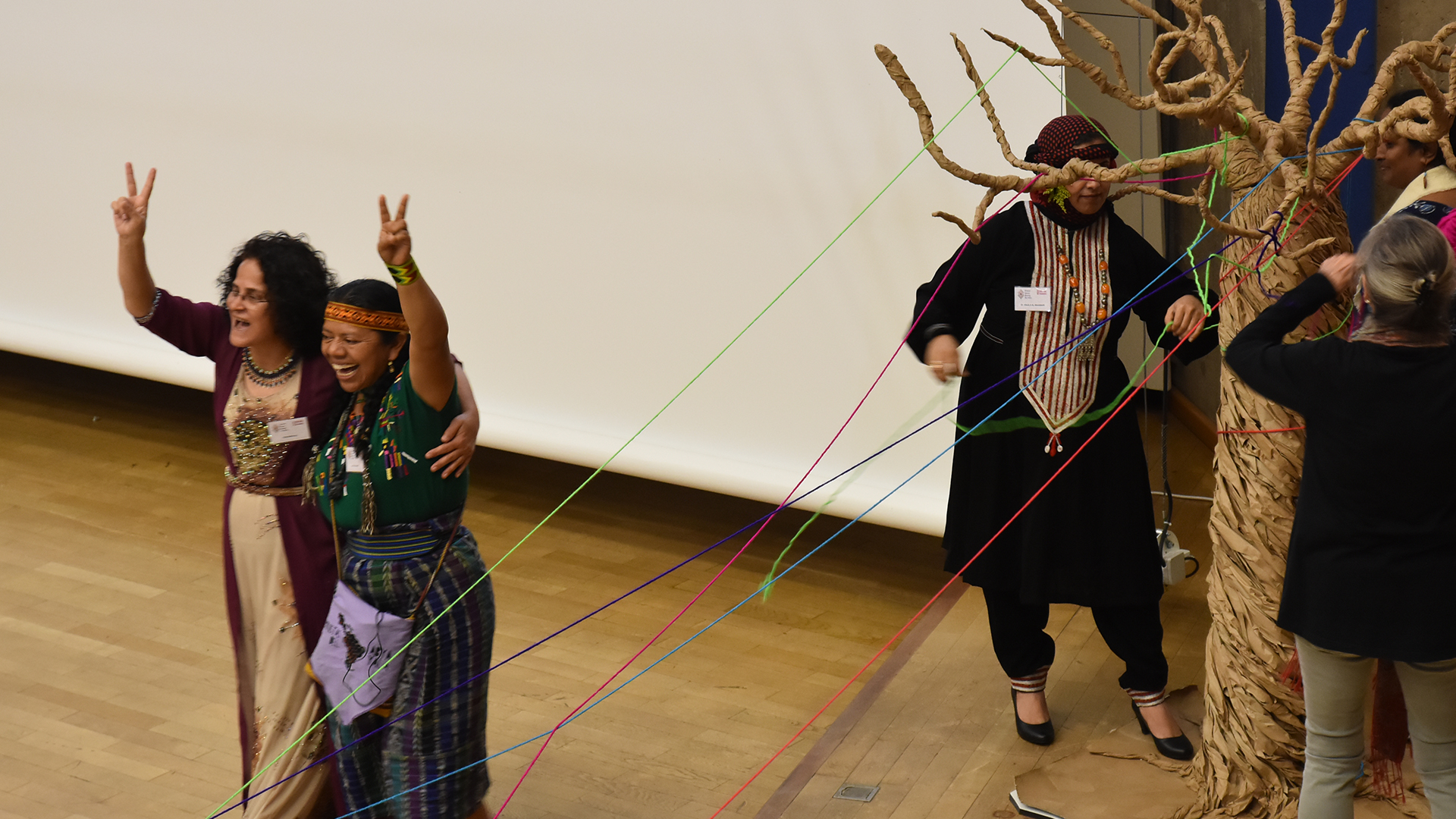 The title of the session that I moderated was Becoming: The desired life will come not through miracles but through revolution. It was devoted to an analysis of the ideological underpinnings of change. How do we understand our struggle and what are we up against? In my own writings on Rojava, I have been interested in understanding the role of ideology as a mobilising force for social change. How do we move the people from the balcony to the barricades? And when they are on the barricades, what is the life they dream of? Whilst the material conditions for revolution have to be ripe, society – both the people and the leaders – has to be ideologically ready to shape the future in a particular direction.

The immersive nature of Kurdish political organising, which Dilar Dirik alerted me to, the fact that the ‘heval’, the friends went from door to door, sat talking late into the night about the Kurdish history of oppression, the patriarchal mindset and what a life of freedom would look like, was all about preparation, about revolutionary hope that the time will come when all of this can be put into practice. And that is exactly what happened in Rojava. A women’s revolution which has inspired the world.

Shadia Abdulmunim, political secretary of the Communist Party of Germany and feminist activist and Dilar Dirik, Kurdish activist, political sociologist and writer tackled the thorny issue of fragmentation faced by Sudanese women and Kurdish women in the diaspora respectively. Dr Anjila al-Maamari, from the Centre for Strategic Studies to Support Women and Children from Yemen, and Marta Dillon, writer and lesbian feminist activist from Argentina, described the women’s movements in their local contexts. Elif Kaya of the Jineoloji Centre and Jules Falquet, feminist activist and academic from France talked about the importance for women to be involved in the production of feminist knowledge of our histories.

The next session, ‘Our Vision: Building Free Life’ looked at questions like how to live, what to do, where to start, how to free men from the grip of patriarchy with the help of Deniz Abukan from the Free Women’s Movement (TJA), North Kurdistan/Turkey and how to organise autonomously with Jade Daniels from USA who led the hall in a rousing chant of ‘It is our duty to fight for our freedom/It is our duty to win/We must love and support one another/We have nothing to lose but our chains’, and Asya Abdullah, co-president of Rojava, who talked about the ultimate example of women’s autonomous organisation – Rojava. Heza Şengal, Yazidi activist, appeared in a pre-recorded video to tell us about the importance of self-defence to Yazidi women and Vilma Rocio Amendra Quiguanás, from the indigenous Nasa people of Colombia, tackled the same subject in relation to her people.

The final session, Finding our Way, was moderated by Havin Guneser from the International Initiative Freedom for Ocalan, arguing the need for a supranational women’s organisation and outlining the proposal for Women’s World Democratic Confederalism, not a vision of uniformity but a network of ‘multiple, flexible but organised partnerships’ of women adapting the model to their own local contexts. Havin was joined by Haskar Kirmizigul of the Kurdish Women’s Movement, Montes Jovita Mataro of the International Alliance of Women, Philippines, Boushra Ali from Democratic Women’s Coalition, MENA region, Irem Gelkus from the Women’s Alliance, Turkey, a representative of Struggle Together, Germany and Nizol Lonko Juana Calfunao from the Indigenous Mapuche people of Chile.

As with all conferences, especially post-pandemic, the buzz of meeting people in the flesh is an indispensable part of the pleasure. The long lunch hours and some missed sessions provided opportunities to catch up with old acquaintances and strike new connections with women from across the world.

Marta Dillon, who spoke in my session, referenced the first feminist strike in October 2016 in Argentina in which hundreds of thousands of women took part. Perhaps the women attending the conference could take this back to their local contexts and organise a worldwide women’s strike to signify a rupture with the past and open the door to Women’s World Democratic Confederalism.