More than 20,000 people from different European countries took part in this year’s Kurdish Culture Festival at Megaland Leisure Park in Landgraaf, the Netherlands, on 17 September 2022.

As in previous years, this year’s international Kurdish Culture Festival brought together the Kurdish diaspora living in various European countries. Many of them are labour migrants, but many have also come to Europe because of the political situation in their countries of origin – Turkey, Syria, Iraq and Iran.

In mixed weather – fortunately there was only a brief, albeit heavy, rain shower – around 20,000 people gathered at the Megaland leisure park in Landgraaf in the Netherlands, which is quite close to the German border, for this festival, which took place for the 30th year. 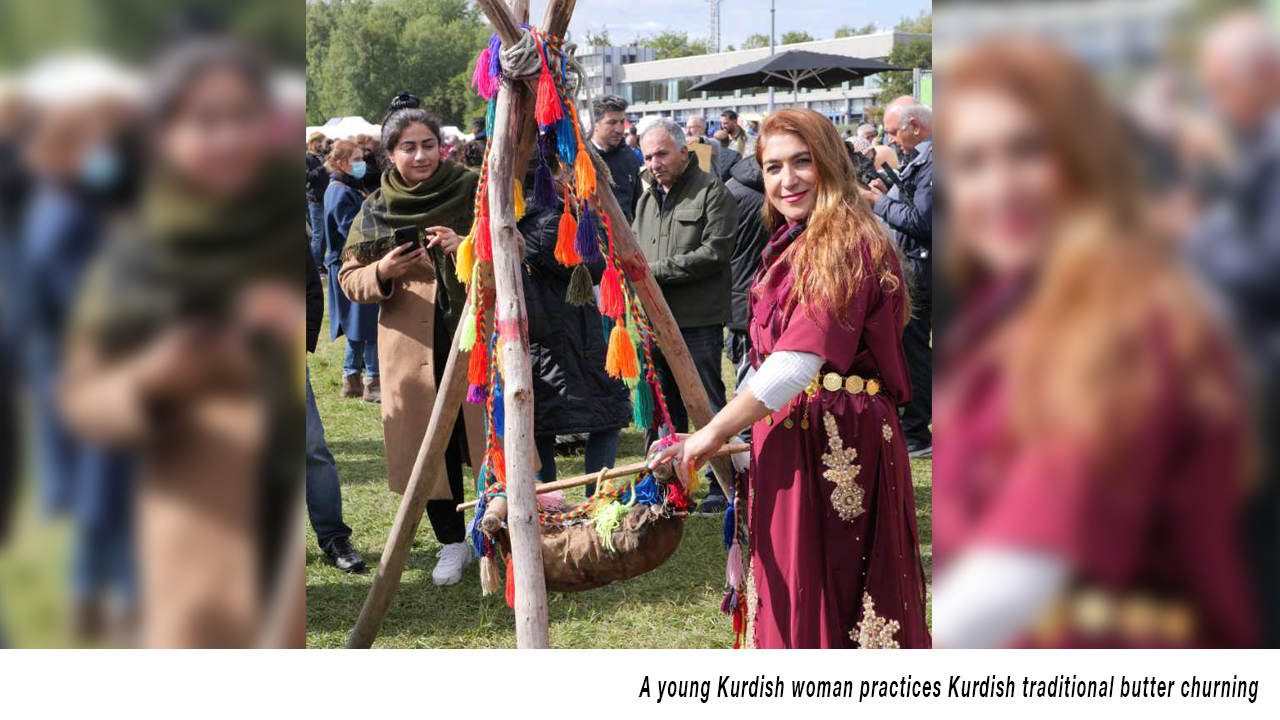 Typical for the cultural festival are food stalls with Kurdish dishes, book stalls and stalls offering jewellery and traditional clothing. This selection is complemented by a small exhibition with reproduced miniatures of cultural monuments from Mesopotamia and a tent showing the traditional way of life of female and male Kurds and their traditional costumes. A stand giving an insight into Yazidi culture was also present.

The centre of attention, however, is a large stage. On and in front of the stage there are traditional music and dance groups. The musicians are usually professionals. The dance groups come from the various communities where mainly young people learn Kurdish dances and enjoy and practice the musical culture from their parents’ countries of origin.

However, the cultural festival also sees itself as a political event. Kurds are still denied political rights in their countries of origin. In Rojava, i.e. in northern Syria, and in northern Iraq, they have been able to establish their own administrative structures under the umbrella of the respective states. Especially in Rojava, since the defeat of the Islamic State, it has been possible to establish a democratic administration that is not only multi-ethnic, but in which equal rights for women also play a central role. While Rojava has succeeded in laying the foundations for a new form of society, Kurds and Kurdish women are under severe political pressure, especially in Iran and Turkey. Political persecution and arbitrary imprisonment are the order of the day. And the Turkish military repeatedly attacks Kurdish settlement areas in Rojava and northern Iraq with air power, drones and artillery. Civilians are regularly killed by these attacks. 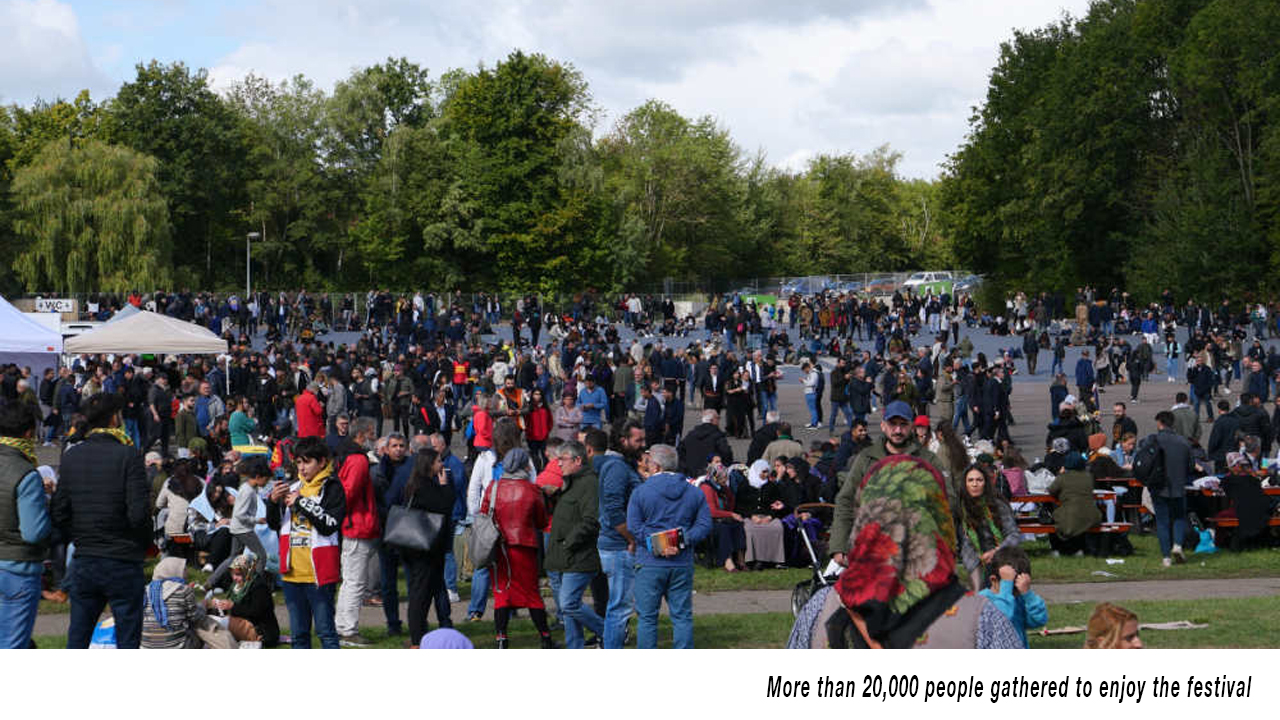 Last but not least, the Turkish government has been holding the Kurdish leader Abdullah Öcalan in isolation on the prison island of İmralı in the Sea of Marmara for 23 years. Both Öcalan and the political situation in the countries of origin of the Kurds will be remembered at this festival. The central political demands are, on the one hand, the release of Abdullah Öcalan and, on the other hand, the recognition of the Kurdish identity and the granting of political autonomy within the framework of a confederal state order that also benefits other ethnic and religious groups.

The festival was also attended by several dozen guests from politics, academia and civil society. These are guests who have long been closely associated with the Kurds and support them in their struggle for political recognition and autonomy. On behalf of all the guests, the chairwoman of the EU Turkey Civic Commission (EUTCC), Kariane Westrheim, who came from Norway, spoke a welcoming speech in which she recalled the inhumane prison conditions of Abdullah Öcalan, which violate international law, and once again underlined the core political demands of the Kurds:

“The long-lasting silence from İmralı is the result of Öcalan being gagged since no one, neither family nor lawyers have heard from him or been allowed to visit him for 17 months. Öcalan’s case is fair and legitimate, yet the treatment of this prominent Kurdish leader is inhuman and cruel, it is incomprehensible that the European Committee for the Prevention of Torture (CPT) and the European Council (CoE) let this pass without a trace of protest. 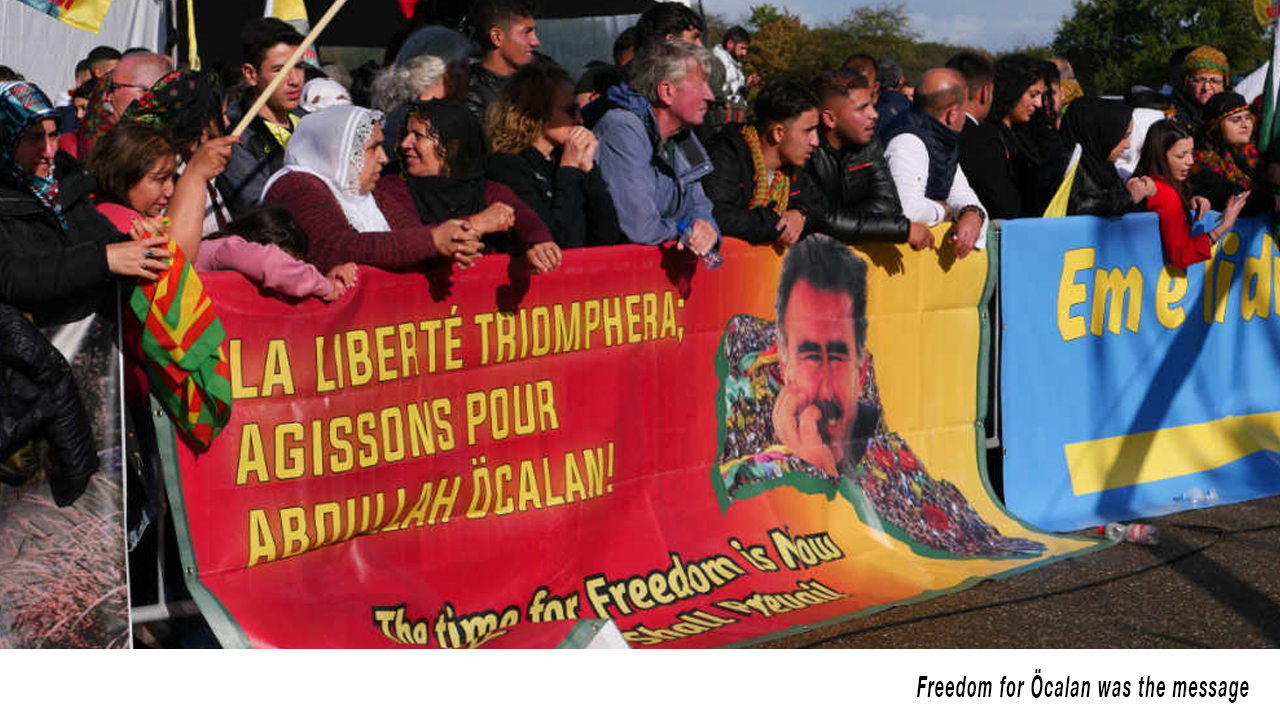 We, as your friends call on the Council of Europe urging them at least to hold Turkey accountable for repeated violations of human rights. We also call on the US, the EU and NATO to stop the undeserved military and political support for Erdoğan and rather open their eyes to the democratic potential of the Kurds, their representatives, and organisations.”

The festival is organised by the Kurdish National Congress (KNK), based in Brussels. For many years, Kurds met for this festival in Germany, usually in one of the larger cities in the state of North Rhine-Westphalia. For a few years now, however, the festival has been held in the Netherlands. The reason for this is political. The Federal Republic of Germany has seen itself as a close ally of the Turkish government for many decades. The Turkish government classifies the Kurdish organisations in Europe as terrorist organisations close to the PKK. In order not to strain good relations with the Turkish government, the German authorities have repeatedly sabotaged the organisation of the festival. Therefore, the festival was relocated to the Netherlands, where it was held for the fourth time.

Despite the relocation, the German authorities continue to try to sabotage the festival as much as they can. The buses in which Kurds had made their way from Germany to Landgraaf in the Netherlands were stopped by German officials at the German-Dutch border. Among the passengers were some people from German refugee camps. They were not allowed to leave and were ordered back to their camps by the German officials. Especially for the people from the refugee camps, the participation would have been a good change from their usually very dull and boring life in a German refugee camp.

Jürgen Klute became a member of the European Parliament (DIE LINKE/The Left) and spokesman for the Kurdish Friendship Group in the EP from 2009 to 2014. Since December 2016, he has been editing the Europa.blog.