A statement by a district mayor representing the CHP in a recent Council of Europe meeting has been heavily criticised by HDP officials as an attempt to legitimise the administration's policy of replacing Kurdish mayors with state-appointed trustees.

Recently, in a joint declaration by six opposition parties, including the CHP, it was stated that the policy of replacing elected officials with appointed ones would see a definitive end under their administration. 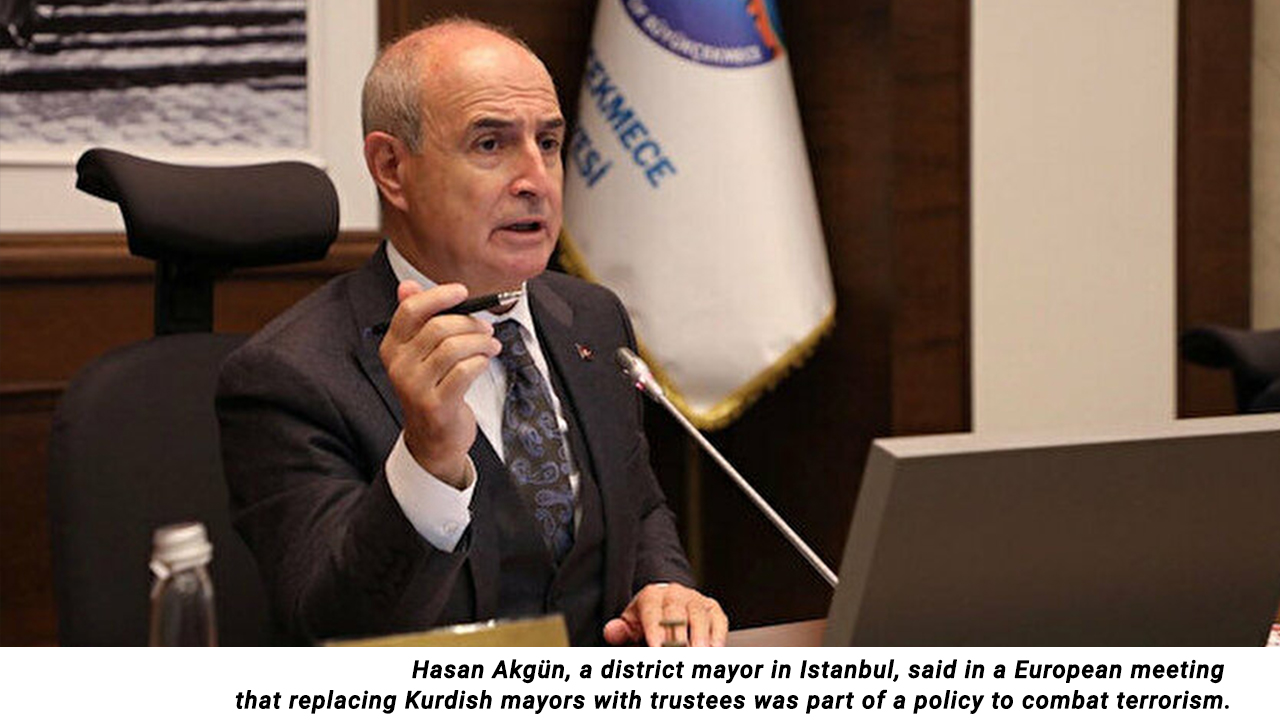 However, in March, the mayor of an İstanbul district representing the CHP in a meeting of the Council of Europe’s Congress of Local and Regional Authorities said that the replacements had to do with terrorism cases.

Hasan Akgün said that as long as terror activities continue in the East, the government’s discharges and replacements on constitutional grounds are likely to continue.

Currently, elected mayors in 48 municipalities (metropolitan areas, cities and districts) out of the 65 where HDP had won the local elections in 2019 have been replaced by state-appointed trustees. Seventy-two mayors were detained, and 39 were arrested; 20 were women. While most of them have been released, six mayors are still under arrest, and although most of the mayors were acquitted of their indictments, they were not reinstated into office.

The mayors of the metropolitan areas of Diyarbakır (Amed), Van (Wan) and Mardin (Mêrdin), with a population in the millions, are among the discharged Kurdish mayors.

Yunus Parim, one of the vice-chairs of HDP on local governments, said that CHP was supposed to clarify if Akgün’s statement reflected his personal opinion or was a reflection of a crack in the CHP regarding the issue.

Parim also noted that defending the Turkish administration’s policy of appointing trustees would also imply complicity in the cases of corruption under these trustees. He said:

“For instance, there’s an ongoing criminal investigation about Mustafa Yaman, who’d been appointed twice as trustee in Mardin. Those who support the policy of trustees end up supporting their corruption.”

Parim emphasised that silence on the part of the CHP over Akgün’s remarks would lead to those remarks being perceived as the party’s official stance.

“When you say such things, you legitimise the appointment of trustees without any legal grounds (…) The appointments were legitimised in the context of combatting ‘terror’. Why doesn’t Hasan Akgün, instead, mention that mayors who were later acquitted of charges have not been reinstated? There are discharged mayors who were not even indicted. Why doesn’t Akgün bring forth these cases?”

“The Republican People’s Party can neither become a party of democratic politics nor a party of the people if it keeps pursuing this path. These remarks once again demonstrate that it is still a representative of the archaic ideology of the Republic.”