The 42nd General Assembly of the European Congress of Local and Regional Authorities was held. The HDP mayor of Silopi, Adalet Fidan spoke to delegates of her own experience and that of her party – and her speech was greeted with a round of applause.

One of the roles of the Council of Europe’s Congress of Local and Regional Authorities is to monitor the democratic practices of local government in member states. On Wednesday, it was Turkey’s turn to have its monitoring report examined and the proposed recommendations voted on. Central to the debate was the Turkish government’s dismissal of elected mayors from the Peoples’ Democratic Party (HDP), using an “overly broad interpretation” of what constitutes terrorism, and the subsequent appointment of trustees to replace these elected representatives. Despite the best efforts of the many Turkish delegates who spoke in defence of their government’s actions and who denounced the HDP as terrorists, the assembled delegates from other European countries were clear that they would not have the wool pulled in front of their eyes.

The monitoring report is the result of visits to Turkey by rapporteurs appointed by the Congress, who spoke to people from both government and opposition. It is careful to record different views and not to act as a court, which would be beyond its remit. (Though it does include the diplomatic sentence, “If one combines all these events, facts and situations, one could easily conclude that the government might be pursuing an agenda of systematically acting against the HDP local elected representatives, using the mechanisms available in Turkish legislation, that is, by having recourse to abusive prosecutions.”) Like every official European document since the EU put the PKK on their terrorism list, the report doesn’t question that PKK members are terrorists and that Turkey has a terrorism problem, but it makes clear that people are being accused of terrorism with no valid reason. The attempt by delegates from Turkey’s ruling Justice and Development Party (AKP) to make an amendment that removed this vital criticism were heavily defeated, and the report and recommendations were accepted by the Congress with way over the required 2/3 majority.

The recommendations call for Turkey to modify their definition of terrorism; to stop suspending mayors without court decisions and to suspend them only ‘with the greatest possible caution’ and respecting the presumption of innocence; to allow the council to appoint an interim mayor from among their members in case of a suspension; to ensure candidates who win elections are allowed to carry out their mandate; and to make other changes to reduce central government control over local authorities. The resolution also calls for regular updates from the rapporteurs.

We heard several AKP speakers; and the delegate from Turkey’s Nationalist Movement Party – the far-right party allied to the AKP government – exemplified the hard-line government position that sees the HDP as an extension of the PKK. In denouncing the PKK, and so also the HDP, he managed to link the PKK to both Russia, and to US and European “imperialists”.

More shocking, however, was the speech from Hasan Akgun, a mayor from the People’s Republican Party (CHP). Despite his party’s championing of “democracy”, and despite the opposition alliance memorandum statement that elected politicians should not be replaced by trustees, Akgun gave clear support to the use of “terrorist” charges to remove the HDP mayors, noting that as long as there were “terrorists” active in the east, the mayors’ suspension and removal would continue. This is clear and depressing evidence that Kemal Kiliçdaroğlu does not carry all his party with him when he speaks of reconciliation and of solving the Kurdish question. The other CHP delegate who spoke only addressed other issues.

Apart from the predictable exception in Turkey’s close ally, Azerbaijan, speakers from other countries – from the Netherlands, France, and the UK – all expressed strong criticism of Turkey’s position. The Dutch youth delegate gave a clarion call against the abuse of “terrorist” claims to quash free speech, and John Peter, of the UK Labour Party, observed that in labelling all political opponents as terrorists, Turkey is adopting the “language of Putin”.

The HDP mayor of Silopi, Adalet Fidan, was able to speak to delegates of her own experience and that of her party – and her speech was greeted with a round of applause. She is one of only six HDP mayors of the 67 elected three years ago who is still in her post, and she credits this to the protection provided by her membership of the Council of Europe Congress. Even so, she was unable to attend the previous Congress meeting in person as the Turkish government withheld her passport (the Council of Europe complained about this), and she has a case against her because she took part in a press statement about the murder of female student, Pinar Gültekin.  Others are detained for such inoffensive actions as taking part in events for International Women’s Day. Removal of HDP mayors and councils has left 4 million voters effectively disenfranchised. Fidan noted that in the case of a genuine crime having been committee a mayor could be suspended while this was investigated, but that their replacement should be elected. 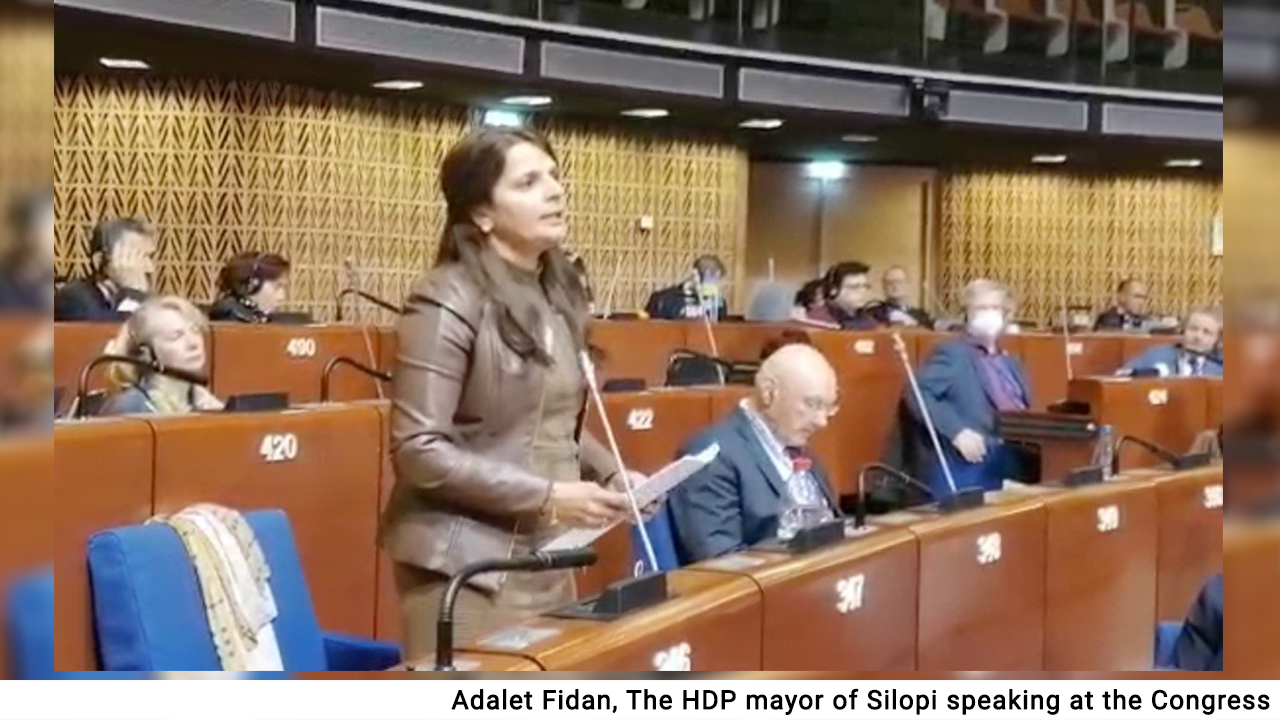 Along with the HDP’s permanent representative in Strasbourg, Fayik Yagizay, Fidan also held meetings with delegations from other countries and with members of the monitoring committee in order to provide them with more information than was possible in her speech in the debate.

She was able to explain that six elected HDP mayors whose election was dismissed on the grounds that they were not eligible, had all had their candidacy previously approved; and she told how the non-recognition of the mayors’ election wins allowed their posts to be given to the candidate with the next highest number of votes – who in each case was from the AKP. She described how calls for removal of other mayors started the day after they took up their posts; and how, when a mayor is replaced by a trustee, the elected council is also dismissed, leaving the trustee without any checks or balances. And she gave other examples of the absurd charges concocted against the mayors: accusations for attending the party function announcing their candidature, and, in one case, because the woman standing behind her when she gave a speech wore a scarf in Kurdish colours.

The trustees replace local civil servants with government supporters. When Fidan was elected she removed people installed by the trustee who had been in control before the election, and reinstalled the original sacked municipal employees. As a result, the people she had removed came to her office with guns to threaten her. When she asked for official protection, she was, instead, accused of carrying out unlawful dismissals. Everywhere she goes she is followed by police, but as an act of intimidation and harassment, not for her security.

The HDP acknowledges that Turkey’s role as a strategic member of NATO makes other countries reluctant to upset the Turkish government, but they also point out that Turkey values its membership of the Council of Europe, which marks its position in the continent.

Criticism by the Council Congress matters – but sanctions for failure to make the stipulated reforms in line with the Congress principles of human rights, democracy, and the rule of law would be much more effective.