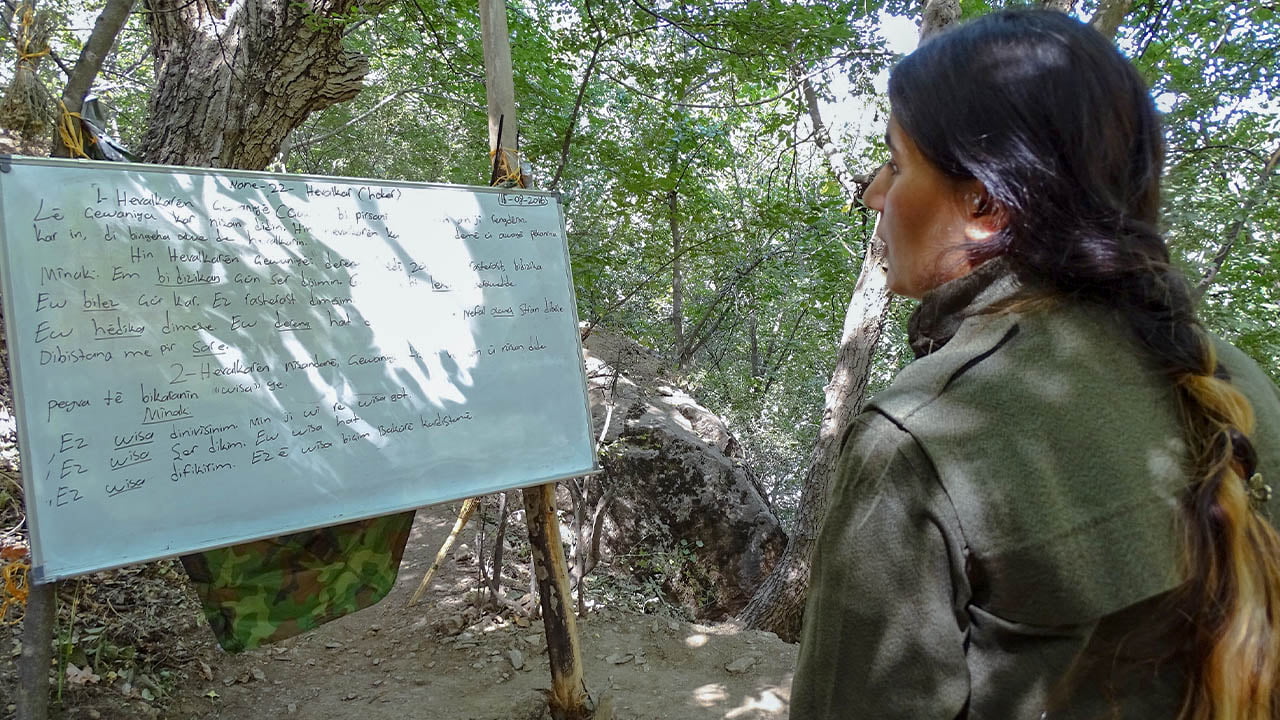 What I remember most vividly about the young German woman I met in a PKK-camp in the Qandil mountains where we both spent the summer of 2016, was her intelligence. She identified herself as an anarchist and struggled with her dedication to the cause of real self-determination for the people. She had gotten to know the Kurdish movement in Germany and came to the mountains to deepen her knowledge about the movement’s ideology of democratic confederalism. What would she do with that knowledge afterwards? She couldn’t make up her mind. Return to Germany because she felt a responsibility towards her home country? Or stay in the mountains and contribute to building a just society there?

After that summer, where we learned Kurdish (she better than I), I travelled to another PKK camp whilst she started the ‘şervanên nû’ training (in English, ‘new fighters’ training). That’s a training course where new PKK recruits learn the first basics about weapons, get fit during an intensive physical programme and receive their first education in PKK-ideology. After that, she wanted to go to an academy in the mountains to read and discuss the ideology some more. For those of us who don’t know: The PKK has several academies where fighters and outsiders can attend courses to get an education in democratic confederalism, Kurdish history, women’s history, and other subjects.

This is not a side of the PKK that many people outside Kurdistan are aware of. Yet, it is, in fact, the most important aspect of the PKK. During my year with the Kurdish armed movement (about which I wrote a book that will be published in English later this year), I have talked to countless fighters who all told me that weapons are a necessity in the Middle-East, but that ‘that’ is not what the fight is about. On the contrary, the fight is about building an alternative society, based on radical equality between women and men and between the ethnicities and religions of the region, combined with respect for the environment.

The Turkish state is using this lack of knowledge about the PKK’s ideology to trick foreign governments into believing that the Antifa-movement in Europe and the US is connected to the Kurdish armed movement and that this, consequently, means that Antifa will start an armed struggle in western countries. But this is exactly the opposite of what the reality is.

In the Kurdish movement, education is not centered around violence, but around building an alternative to the violent state. That state, the conviction is, can only be brought to its knees through investing in a viable alternative. A society where the monopoly on power is not in the state’s hands to protect the interests of the capitalist elites, but in the people’s hands to defend themselves – in the Middle-East, for example, against ISIS or other jihadists groups, and against the violence of states like Turkey.

This is the knowledge that European and American leftists – part of them active in the Antifa movement, like the young German woman I met, and like the Portugese woman I met in another camp – take back home. And this is what I understood their personal struggle to be. They came to the mountains to get an ideological education, but where would they be able to work with their strenghtened knowledge?

The Portugese woman, for example, didn’t consider European soil to be fertile enough yet to build a new society upon because Europeans, in general, were – in her eyes – oblivious to the destructiveness of capitalism. Returning to Europe would, therefore, mean an endless investment in organizing people and educating them before she’d see anything come to fruition. Alternatively, staying inside the Kurdish movement would mean being with like-minded people all the time and witnessing promising results immediately.

The more ideological education you get inside the PKK, the further you drift away from violence and the more you become aware that its ideology spans all aspects of life and society and that investing in those aspects in a way that fits your background and personality is the biggest challenge and the biggest achievement possible. It is that total dedication to non-violent work that contributes to the strength of the fighters when a war needs to be fought – for example, against ISIS – that has impressed me most during my time with the PKK.

From what I’ve heard (but I’m not sure), the German woman from the language camp stayed in the mountains and pledged her eternal loyalty to the movement (she became ‘cadre’, so to speak) and the Portugese woman returned home. These are the people that Erdoğan is warning western countries about. And indeed, states and especially authoritarian leaders should be afraid of them. But not because American and European citizens return from Kurdistan as violent radicals, but as educated ones.