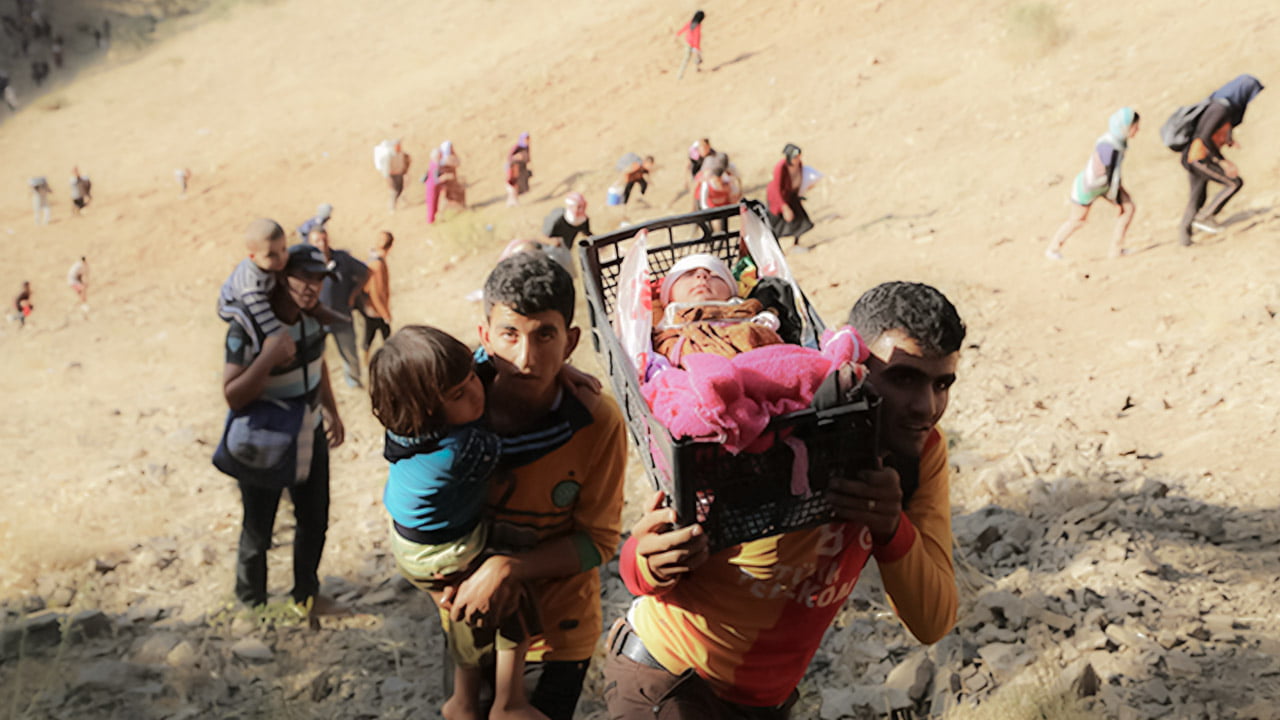 Located within the borders of Southern Kurdistan, in the south of Duhok and where Yazidis (also often referred to as Êzidîs) live, Sinjar is a district of the city of Mosul. This place is the gateway to both Rojava (Til-Koçer) and Duhok-Zaxo.

On 3rd August 2014, ISIS attacked Sinjar and the Yazidi people who lived here. When the Islamic State of Iraq and Syria (ISIS, or IS – the Islamic State, as its representatives have called it since 2014) reached the city centre, the peshmerga forces, who were expected to protect this region, withdrew and left the area vulnerable to attack. ISIS massacred Yazidis in this region which remained occupied for more than a year.

ISIS killed thousands of Yazidis, and took thousands of women and children as prisoners. Some of the prisoners were sold by ISIS members in various Arab countries in slave markets. Some were killed and some were raped. 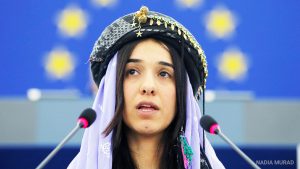 Some managed to escape through to Syria, some went into the Iraqi Kurdistan Region, and some fled to Turkey. Many Yazidis found themselves in camps established by the municipalities, as some were also located in camps created by the Disaster and Emergency Management Presidency (AFAD) which came to Turkey.

For Yazidis, these ISIS massacres were not the first massacres they have experienced. Yazidis have described what they have lived through in Sinjar as a continuation of the previous massacres and call it the “73rd Decree”.

For Yazidis, the word “decree” refers to massacre. In 21st century terminology, this means genocide. There is a long history of massacres of Yazidis in the Middle East.

A History of Massacres

The first reported massacre was an extermination operation that started in 906 with the murder of a thousand Yazidi families by the Governor of Mosul Hamadani.

Yazidis, mostly living in Sinjar, within the borders of Iraq, have experienced 73 massacres so far. The fact that they did not accept the religion of Islam made the Yazidis a target of massacre and repeated attacks.

According to Arjin Dilek Öncel’s report, in the past, hundreds of thousands of Yazidi people were massacred by the Arab tribes and the local Kurdish rulers cooperating with the Ottoman army. Continuous massacres took place in regions such as Turabdin, Dersim, Garzan, Diyarbakır, Cizre, Telafer, Zap, especially Sinjar, where the Yazidis live. Many leaders of the Yazidis were executed. Women and children were taken and sold. Some of the Yazidis were forcibly converted. Those opposing such oppression were either murdered or forced to emigrate each time. The immigrants mostly settled in the Caucasus and Armenia. 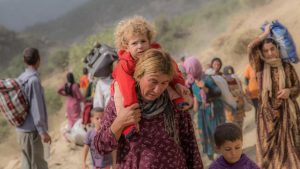 Lalish, located in Şexan, the north of Iraq, was constantly attacked and as a result of these attacks, holy places and tombs were also destroyed. In addition to plunder in the Yazidi district in Lalish, priceless historical and religious items were plundered from other regions and taken to Mosul.

Islamic madrasahs were opened in the holy Lalish region, the worship of Yazidi and the word Yazidi were banned.

The massacres of Yazidis did not end with the First World War. The Ottoman army, Arab Bedouin tribes and Muslim Kurdish tribes routed this region. During the Republican period in Anatolia, Turkish soldiers, who raided Kiwexe village of Mardin city in 1940, trapped 29 Yazidi in a cave and burned them alive. This village was once again raided by soldiers three times. On each occasion, many Yazidis were killed.

Yazidis, most of whom live in the Şexan and Sinjar region in Iraqi Kurdistan and in Armenia, Georgia, Syria and Turkey, have experienced massacres. Before the ISIS directed massacres, the Yazidis once again faced a massacre in Tilezer with Siba Şex Xidir in Sinjar in August 2007. According to official figures, nearly 500 Yazidis were killed there.

ISIS made a name for itself with the massacres they have committed in Iraq and Syria. They occupied more than 100,000 square kilometers in Syria and Iraq in late 2014 and early 2015, when the organisation was at its peak, and ruled a population of about 8 million in these regions.

The Occupation of Mosul and its repercussions

The occupation of the city of Mosul led to the massacres that were to take place in Sinjar.

Mosul, where no resistance was experienced, was occupied by ISIS. The ammunition left while the Iraqi army fled, further strengthened ISIS. Having captured Mosul in June 2014, ISIS turned to Sinjar, which was located to the west of Mosul, where the Yazidis lived under the protection of the Kurdistan Regional Government.

ISIS began the massacres by attacking villages all over Sinjar. When they attacked Sinjar with great force, on 2nd August 2014, the KDP (Democratic Party of Kurdistan) peshmerga were the first to leave. Their departure determined the fate of the remaining Yazidis.

Sinjar and its liberation

According to the Yazidi Rescue Office :
• 6,417 Yazidis were kidnapped by ISIS on Aug 2014
• 3,451 Yazidis have been rescued or escaped
• 2,966 Yazidis remained in captivity or their whereabouts remain unknown
• 2,745 children were left as orphans
• 80 mass graves have so far been found

Women were sold in slave markets. The fate of 3,000 women and children is still unknown. The Yazidis experienced the worst horrors in the villages and in the Sinjar mountains. 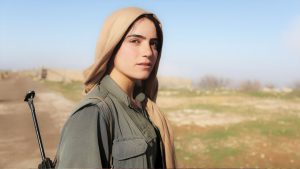 Yazidis organized the Sinjar Defence Units (YBŞ) against the massacres in 2014. Thousands of Yazidis were transferred to the cities of Northern Syria thanks to the corridor opened up with the help of People’s Defense Unit (YPG) forces from Northern Syria. Some Yazidis were forced to migrate to Batman, Mardin, Diyarbakır and Şırnak.

The operation started after the occupation ended on 13th November 2015. Kurdish forces, including Yazidis, liberated Sinjar. Since the massacre, 8,000 families have returned to the region protected by the Sinjar Defense Units.

Genocides are the ‘rings of a chain’ 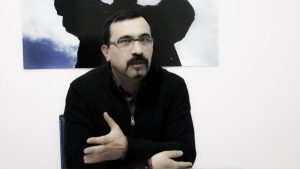 According to Namık Kemal Dinç, who has written a book on the Yazidi genocide, the specifics of the Sinjar massacres have not been fully recorded as the information we have still insufficiently is able to fully record the vast scope and dimensions of the massacres throughout the region.

Dinç argues that we need to recognise a connection and continuity between the massacres that have taken place. Yazidis were subjected to genocide alongside the Armenians and targeted ‘Others’: “In today’s conjuncture, where the Middle East is smashed, many unorganized, weak social groups faced genocide. Yazidis, Kakais and some other groups are the leading ones.

“Unfortunately, this has been the same in history. For example, it has been historic as with the 1915 Armenian genocide. It is true that the Armenians are the social group that suffered the greatest damage from this genocide, but 1915 is also a Yazidi genocide”.

His conclusion is that “a homogenization policy based on religion-based Islamization in Anatolia and Mesopotamia has continued until the present with many massacres, pogroms and genocidal practices since the last quarter of the 19th century.

“In this sense, the genocide committed by ISIS in 2014 with the genocide in 1915 should be seen as the rings of a chain”. According to Demirel, the Yazidis themselves see the 73rd decree as an attack that caused greater destruction than past edicts.