Issuing a press statement regarding the bombing of the Kurdish village of Galala by a Turkish drone, Defend Kurdistan Initiative members condemned the silence of the Kurdistan Regional Government (KRG) in the face of this most recent attack which took place just half an hour before the delegation for peace left the village of Kuna Masi.

“These genocidal acts from Turkey are continuing right now, using military technology from Europe, whilst the government from Kurdistan remains silent,” read the statement of the Defend Kurdistan Initiative.

The Initiative called on people everywhere to condemn the Turkish military attacks, to stop their governments selling weapons to Turkey. In its appeal to the Kurds, it urged: “Join together against the invaders. Do not fight amongst yourselves. Right now, Turkey is doing everything to rebuild the Ottoman empire, so making divisions between Kurdish groups is exactly what they want. We are here, standing with you, and we are calling on the rest of the world to do the same.” 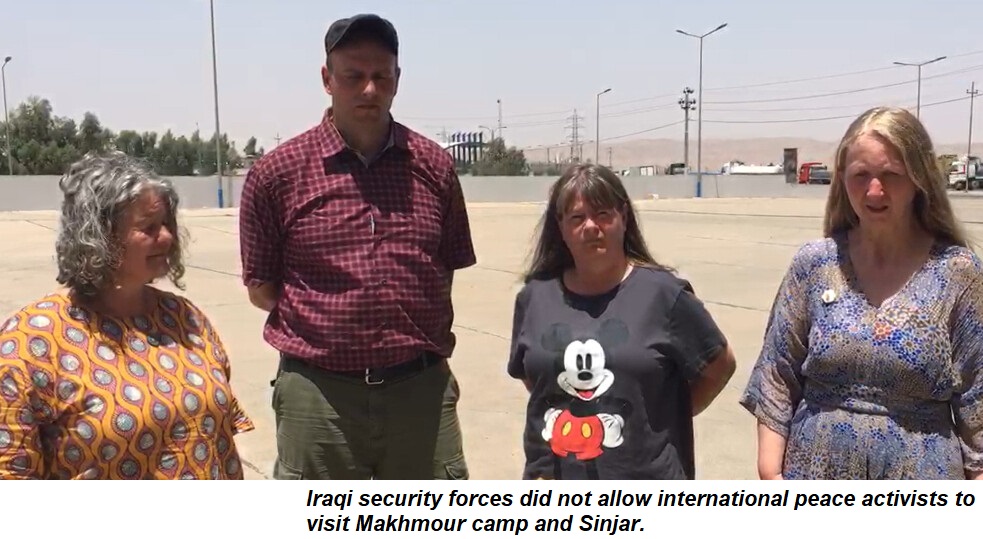 International peace supporters were also prevented from visiting Makhmour Camp and Sinjar, according to ANF.

Two peace delegations formed by the activists of the Defend Kurdistan Initiative who have been visiting Iraqi Kurdistan for a week wanted, on Sunday, to make a visit to Makhmour (Mêxmûr) Camp and Sinjar. However, Iraqi security forces in Kirkuk stopped the delegation on its way to Makhmour and did not allow it to travel to the camp. The other delegation that had intended to travel to Sinjar was also not allowed to visit the Yazidi town by the Iraqi security forces.