The conditions in Yüksekova district, six years after ‘self-governance’ was declared

‘Self-governance’ was declared by the Democratic Society Council in the Yüksekova district of Hakkari (Colemerg) in Turkey on 13 March 2015. Jin News has assessed what happened after this declaration was made and ‘clashes’ ensued. What is the current situation in Yüksekova (Gever) district?

During the ‘self-government/self-governance’ resistance that lasted for 79 days in Yüksekova, Kurdish people experienced the most violent forms of war. They started right after the declaration of ‘self-governance’. Contributors to the press release issuing the declaration were detained on the allegation that they were “trying to break the constitutional order” of the state.

Sexist writings on the walls

The clashes between YPS (Civil Protection Units) and state armed forces continued for days whilst hundreds of houses were demolished in Yüksekova, and thousands of citizens had to leave their lands.

People who did not leave tried to protect themselves on their own. Thousands of civilians stayed in their homes under the threat of death. Turkish soldiers and ‘special forces’ daubed sexist phrases on the walls of the empty houses which created public outrage. 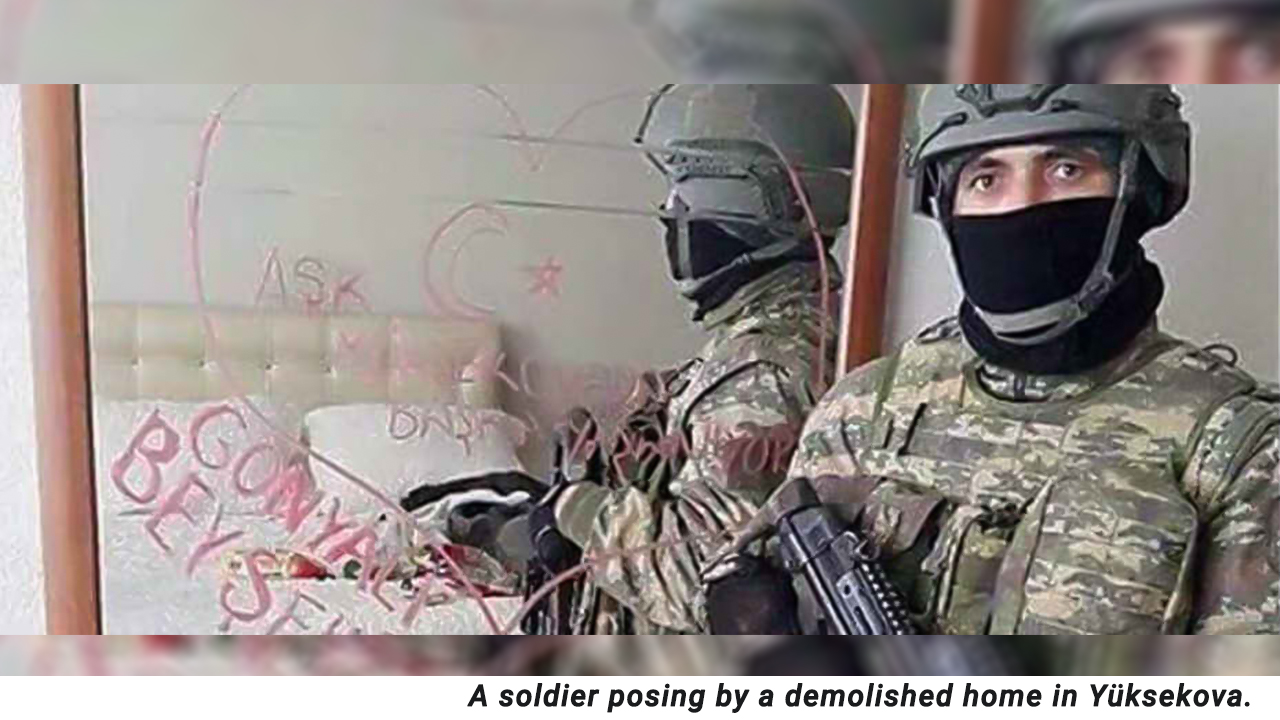 According to a Chamber of Civil Engineers report, 3,637 houses were made uninhabitable and 35% of the population was left homeless after the ‘clashes’. The operation launched by Turkey’s armed forces continued for 30 days.

The Human Rights Association (IHD) and the Human Rights Foundation of Turkey (TIHV) went to the region after the operations. Their report revealed that even after the ‘operations’ by the state were ‘officially’ declared to have ended, state forces burned down empty houses in the neighbourhoods of Güngör and Cumhuriyet.

More than 90 people, many of them YPS ‘resisters’, lost their lives and the bodies of many of them remain ‘missing’. Their families are still searching for their bodies. Some of them were found at a cemetery of the ‘unknown’.

People who had to leave the district because of the ‘clashes’ began slowly returning after the bans ended. They wanted to set up tents to live in – in front of their burned houses – but were faced with a “tent building ban” by the governor. Once more, they were forced to leave the sites around their residences and the area.

Despite these official restrictions and threats, thousands of people who did not want to leave their homes have started to rebuild their neighbourhoods by staying in tents without electricity and water. Solidarity calls were made and more than 100 houses were collectively rebuilt-in Güngör and Cumhuriyet neighbourhoods

Meanwhile, the state has tried to benefit from the demolitions and turned Yuksekova into an income generating area. The state-run Housing Development Administration (TOKI) began its work. Six years have passed and the houses built by TOKI have been ‘given’ by a lottery to the families whose houses were destroyed. Moreover, they have demanded money for these ‘TOKI houses’ from the very people whose houses were burnt down.