Testimonies of Kurds killed in Konya: ‘We believe that they attacked us because we are Kurds’

The testimonies of the recently killed members of a Kurdish family in Konya that were presented to a prosecutor on 28 May, after they were first attacked, were revealed. They clearly stated to the prosecutor that they were attacked because they were Kurds.

Mehmet Altun, the hitman, is still on the run four days after the racist massacre.

Although there is an attempt to portray the murder of the Dedeoğulları family as a “disagreement” by the Turkish authorities, who strictly reject all discussion even about the slightest possibilty of any racist motives in the killings, the Dedeoğulları family had been harrassed and bullied for years in Konya, where they moved from Kars (Qers), due to the fact that they were Kurdish. The family members also stated such concerns in their testimonies, MA reported. 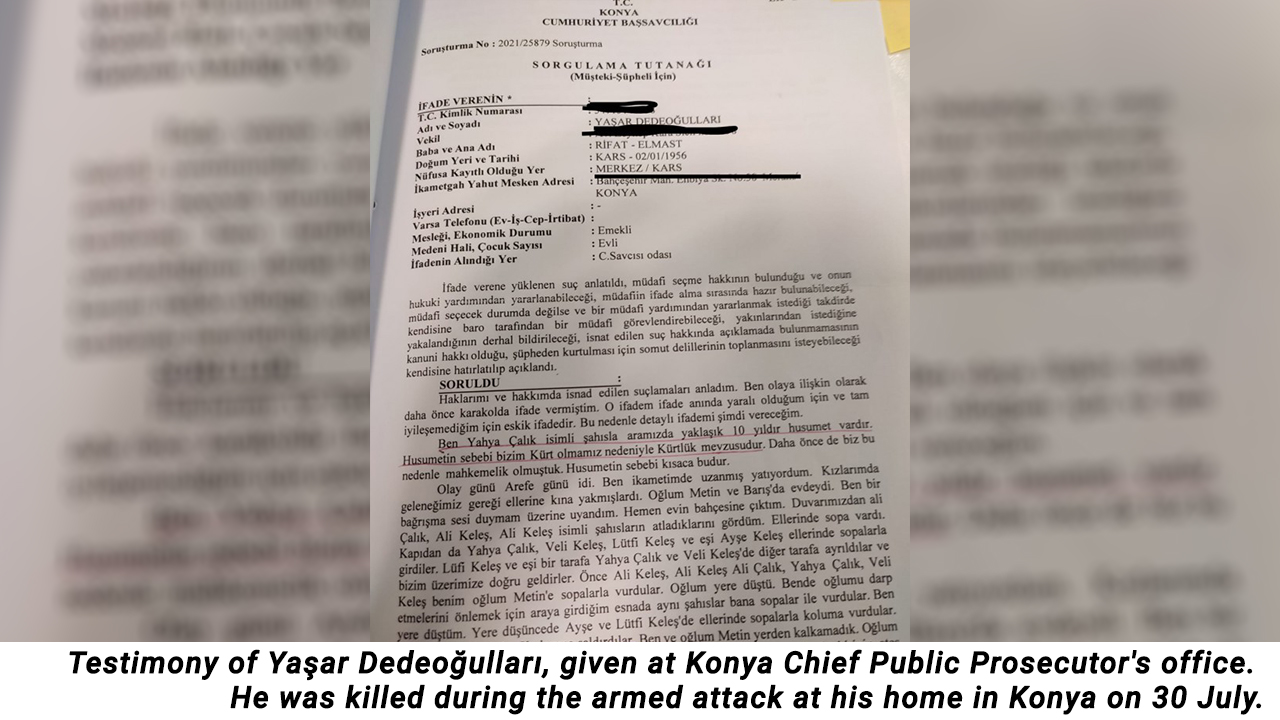 This was not the first time the family had been attacked. The same family was attacked by racist neighbours on 12 May as well. After that attack, the family had applied to the police and Turkish authorities and filed a complaint against the attackers, demanding protection.

Members of the family, who were killed on 30 July, had previously shared their concerns on 28 May that they had been attacked because they were ‘Kurdish’, in their testimonies that they presented before the Chief Public Prosecutor of Konya.

The testimony of Yaşar Dedeoğulları, given on 28 May at Konya Chief Public Prosecutor’s office, proves that the family had clearly stated to Turkish judicial authorities that they had been attacked on racist grounds, but the authorities did not act on it. 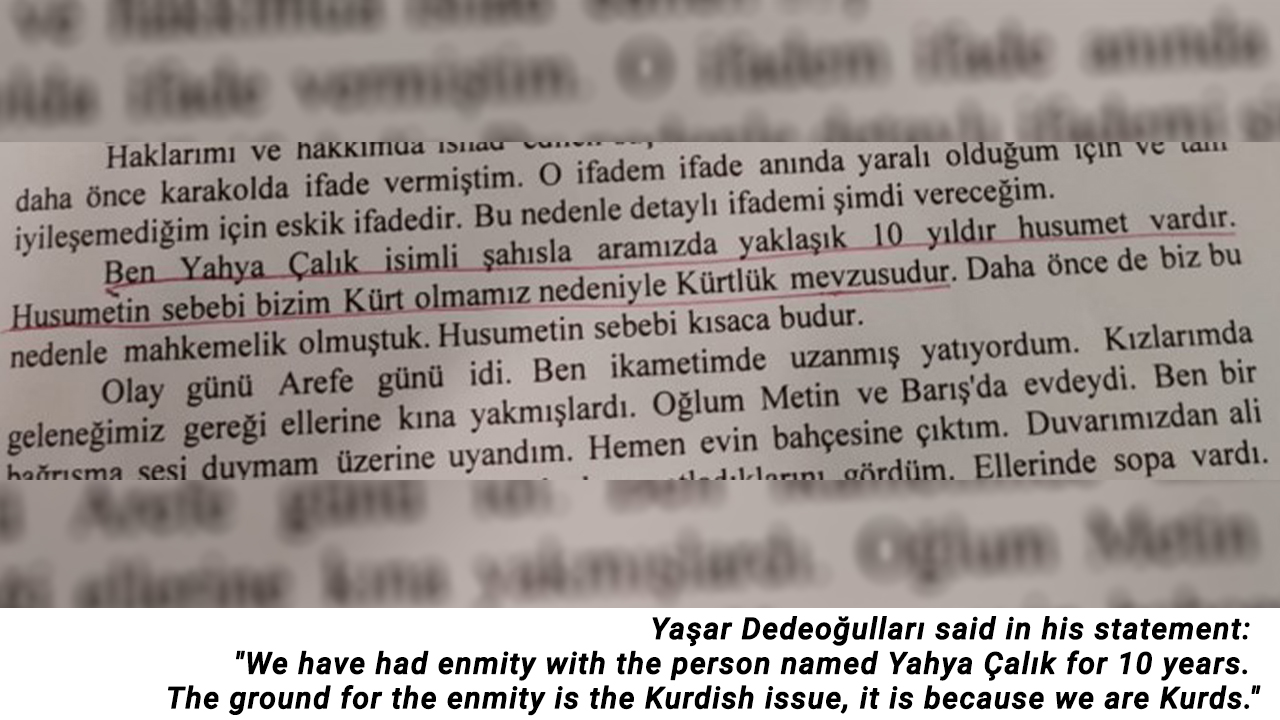 Yaşar Dedeoğulları said in his statement: “We have had enmity with the person named Yahya Çalık for 10 years. The ground for the enmity is the Kurdish issue, it is because we are Kurds. We were engaged in lawsuits over the same issue before. This is the nature of our enmity.” 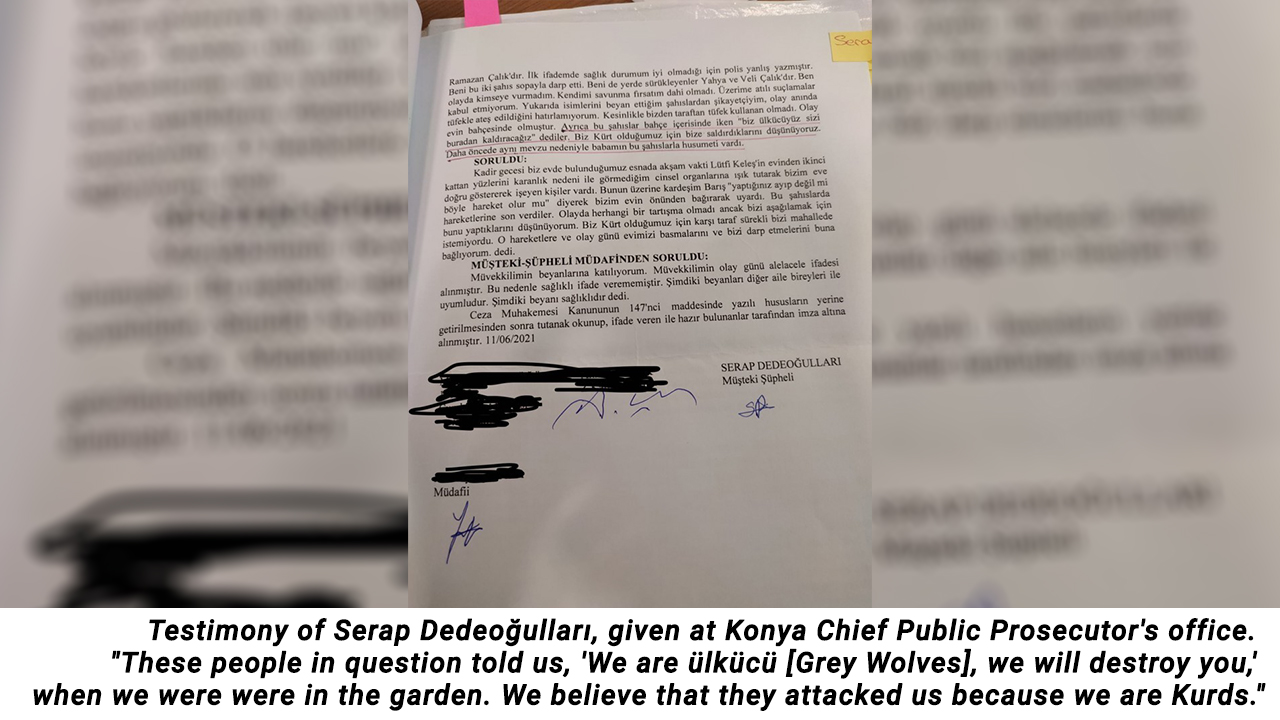 The testimony of Serap Dedeoğulları, given at Konya Chief Public Prosecutor’s office, also included the following statements: “These people in question told us, ‘We are ülkücü [Grey Wolves], we will destroy you,’ when we were were in the garden. We believe that they attacked us because we are Kurds.”

Serap Dedeoğlulları also stated: “Since we are Kurds, the other party did not want us in the neighbourhood. I link their harrasment and their raid in our home with this.”