Ali Çiçek lost his life after a death fast in 1982 in Diyarbakır (Amed) prison. 39 years after his death, his sister Ayşe Çiçek thinks the regime in Turkey is “much worse” than the 12 September coup d’etat regime in an interview with Mesopotamia Agency.

The hunger strike launched by political prisoners in Turkey to protest against the isolation of Kurdistan Workers’ Party (PKK) leader Abdullah Öcalan and the violations taking place in prisons is on its 133rd day.

The hunger strike began on 27 November 2020, but this is not the first hunger strike launched by political prisoners of the Kurdish freedom struggle.

The very first hunger strike ever launched in the history of Kurdish freedom struggle in Turkey was launched by Kurdish political prisoners in 1981, just one year after the 12 September 1980 military coup in Turkey.

Importantly, this hunger strike was launched in Diyarbakır prison, also known as the ‘Amed dungeon’ for its notorious practices of torture and barbarity.

The death fast action has been recorded as one of the most significant resistances against the inhumane practices in Diyarbakır Prison which were then orchestrated by Esat Oktay Yıldıran, a Turkish military sergeant infamous for his role in the torture of the day.

A leading cadre of the PKK: Ali Çiçek the “Red Star”

Ali Çiçek lost his life on the 65th day of his death fast action.

Born in 1961 in a village in Turkey’s southeastern province of Urfa (Riha), Ali Çiçek met with the ideas of the Kurdish freedom struggle when he was 16 and joined the PKK.

Ali Çiçek was caught in Urfa conducting political organisational work for the movement, but then he was released and continued his political activism.

The second time Çiçek was caught changed his life forever, because he was send behind the walls of Diyarbakır Prison, which was known for the barbaric systematic torture practices especially conducted on the inmates of the PKK by military officers “specially chosen” for this “duty”.

Ali Çiçek has been a symbol of resistance, especially for Kurdish youth, with his resistance against all the beastly practices of torture he endured.

He has been called as “Red Star” ever since for his unyielding resistance in Diyarbakır Prison. “I had waited for three days in Diyarbakır Prison to be able to visit my brother. I raised him, I was like a second mother to him. That is why I was so deeply concerned about him. There was a grim cruelty in prisons. Inmates in Diyarbakır Prison used to be tortured every single day.” These are the words of Ayşe Çiçek, the sister of Ali Çiçek.

Ayşe Çiçek is a living witness of the cruelty in prisons after the 12 September 1980 coup in Turkey.

During her prison visits, she saw in person, how her brother Ali Çiçek was carrying the marks of torture.

“He used to look terrible. He was barely standing on his feet. It was obvious that he had been tortured. Of course I would not ask this to him, because they did not let us talk much,” Ayşe Çiçek said.

She also remembers that “there were always the noise of barking dogs” in Diyarbakır Prison, “there was a constant noise that you could barely understand what anyone was saying.” 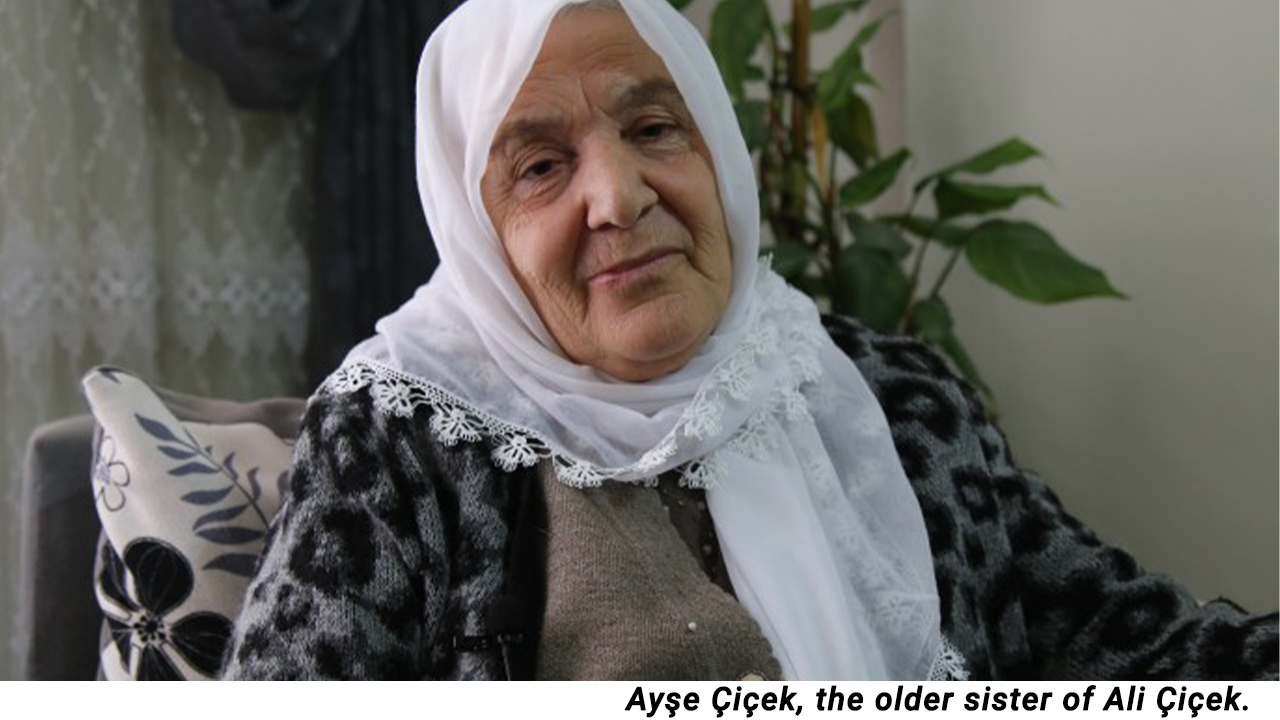 ‘We learned his death fast after he died’

“We only learnt that he was on a death fast three days after he lost his life. My mother went to prison to see him on his death fast period -as we learned afterwards- but the guards never let her see my brother,” Ayşe Çiçek said.

Burying a brother more than one time…

After Ali Çiçek lost his life on the 65th day of death fast, Ayşe Çiçek and her family was torn apart.

“God, let no one suffer such pain. I was working in a cotton field when I heard that my brother had died, I ran for 5-6 kms non-stop to our home, which was surrounded by soldiers,” she said and continued, “We went to Dyiarbakır to take his body, but on the way the soldiers tried to stop us many times. We finally brought his body to Osmaniye (a city in southern Turkey close to Adana), because the racists did not allow us bury Ali in Urfa.”

The Çiçek family tried for years to be able to bury his body in their hometown of Urfa.

“After a long time, we were able to bury Ali here -in Urfa, but then, they kept breaking his gravestone. The attacks never stopped, so we had to transfer him to another graveyard in Diyarbakır.”

Ali Çiçek was finally buried in the Yeniköy Cemetery in Diyarbakır, but burying her brother under the ground more than once had opened deep scars in the soul of his sister Ayşe.

“I had gone mad. I was like crazy. I was not able to sleep without pills. I did not know where I was and where I should go. I will never ever forget my brother as long as I keep breathing.”

‘We are passing by days similar to 12 September’

Having survived from all that suffering of the 12 September 1980 coup, Ayçe Çiçek compared contemporary Turkey with the Turkey of those times of the coup. “We are passing by days similar to 12 September. Actually, this period in some ways is worse than the days of 12 September. The rulers are much worse than Kenan Evren, they put people behind bars simply because of their opinions,” she said.

Since she knows what it means to lose someone you love in a hunger strike, Ayşe Çiçek called on the people to act for the ongoing hunger strikes in Turkey’s prisons now: