Scream a new world into being

Dilar Dirik’s eagerly anticipated book, The Kurdish Women’s Movement: History, Theory, Practice, published recently by Pluto, ends with this rallying cry from the Zapatista women to ‘scream a new world into being’. For anyone new to the Movement, this is a pretty comprehensive account focussing on three of the four countries across which the Kurdish population was divided by the colonial era Sykes-Picot line drawn through Western Asia (Middle-East) in 1916 – Turkey, Syria and Iraq.

Dirik, a leading Kurdish activist and intellectual based in the West, acknowledges that Iran, the fourth country, didn’t get much of a look-in partly because she was unable to visit and partly because the Kurdish freedom movement began organising late in Rojhelat, as this part of Kurdistan is known. Similarly, the gap in my own knowledge of this area also remains gaping. 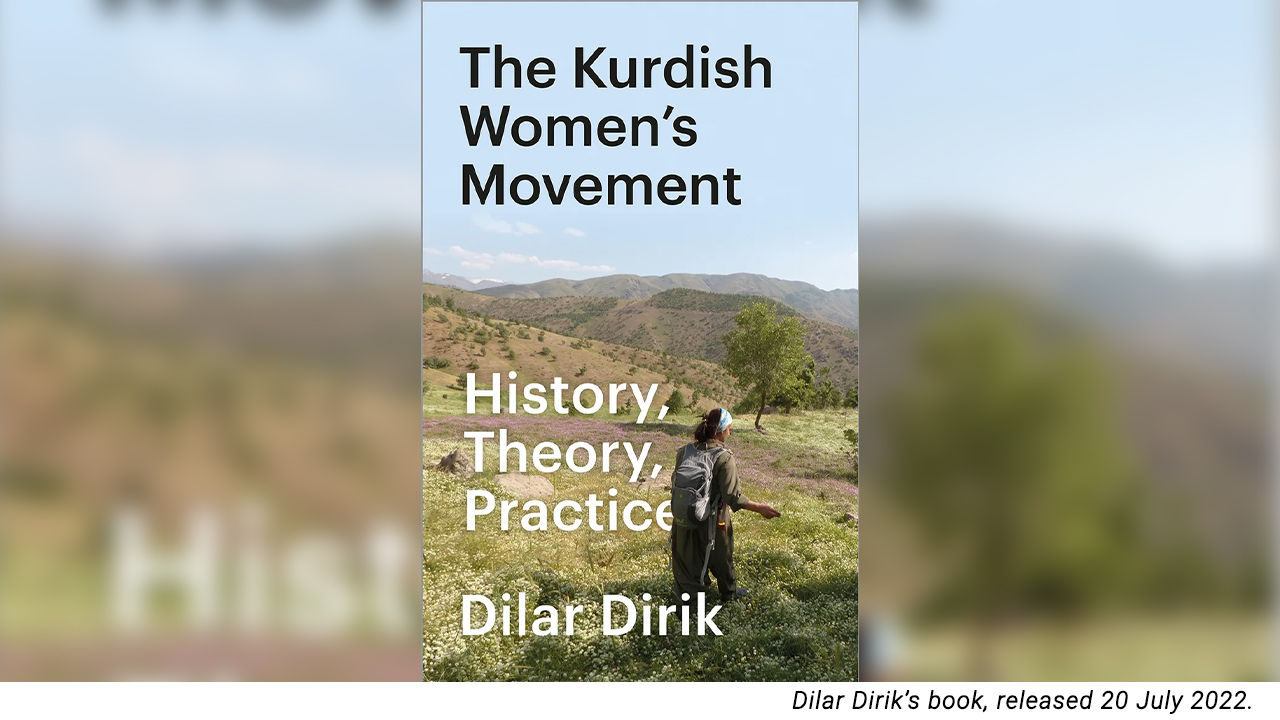 Her account is driven by a passionate rebuttal of the tropes that have developed around Kurdish women by a Western media keen to draw the revolutionary sting out of the movement. It aims to tell a ‘radical women’s history from below’ in the voices of the activists and to enthuse feminists everywhere to develop a ‘World Democratic Women’s Confederalism’, a world system for and by women, to end patriarchy and statist power. It appears to be Dirik’s firm belief that women’s global common struggle is the ultimate act of solidarity with the Rojava women’s revolution, an oft repeated plea by women in Rojava, which I visited in 2016, and asked what we, in Britain, could do to provide solidarity.

This is, of course, easier said than done, a fact that emerges implicitly from Dirik’s own account of attempts to build democratic confederalism in Bakur (South-East Turkey). They have been systematically crushed by Erdoğan’s brutal dictatorship, despite the strength of the Movement there which generates wave after wave of courageous activists to replace those imprisoned on trumped up charges.

Dirik’s analysis is infused with revolutionary hope. The reader is not allowed to sink into despair and, of course, the facts on the ground vindicate her approach – we have the world’s first women’s revolution taking place in the middle of a war in Rojava, North Eastern Syria. Dirik shows us how we got here with both painstaking detail and a grand sweep which takes in 40 years of women’s activism.

So much of the Kurdish women’s struggle is littered with the bodies of women tortured and killed, starting with the resistance spearheaded by Sakine Cansiz, co-founder with Abdullah Öcalan of the PKK (Kurdistan Worker’s Party). In the early 1980s against the notoriously brutal regime of Diyarbakır prison, she spat in the face of the torturer-in-chief during one of his torture sessions. Under her leadership, the women did not betray the identities of fellow militants that the Turkish state was seeking. This resistance is credited with being the pivotal moment when the PKK rose from ‘being one small revolutionary group among many to a popular movement’ and the first autonomous organisation of women in the PKK resisting specifically as women against the Turkish state.

Dirik brings the women that she interviewed to life before us with well-chosen detail such as the ‘warm eyes in her round, rosy face were framed by glasses’, made all the more poignant when we are told that she has since been killed. Many of the women she met have died but sadness is transmuted into hope when the narrative goes on to outline how her life and work are memorialised and how it inspires new generations of women. Both the immense sacrifice and the achievements are always kept in the frame. 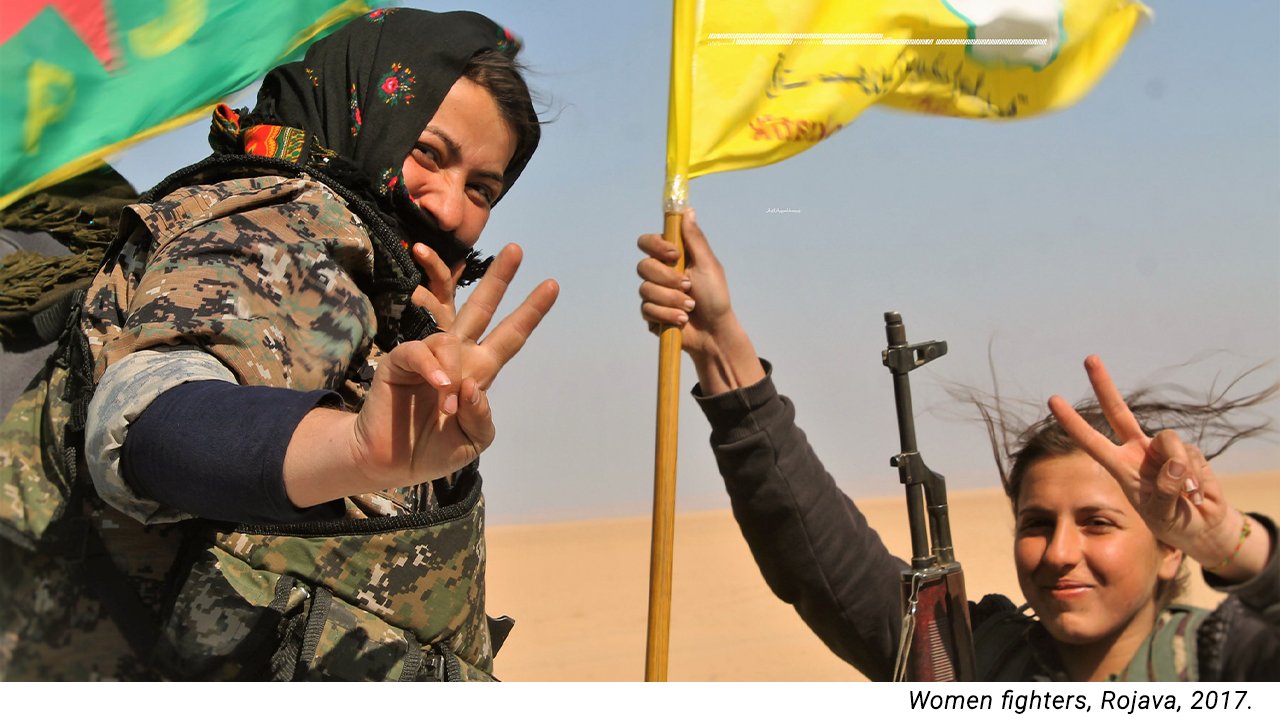 This framing is part of Dirik’s attempt to use the book as a mobilising tool. She points out the other reasons why the political ideas underpinning the Kurdish women’s movement should appeal at this particular time: its emphasis on ecological sustainability when the world is devastated by climate change; its ideological antipathy to borders at a time when borders are increasingly ineffective under pressure from forced migration; its anti-patriarchal stance when there is a global feminist awareness and action against feminicide; its anti-statist stance when nation-states are revealing their true colours as sites of division and destruction.

There is a softness and humanity which separates it from traditional left movements – an unabashed paean to revolutionary love, care and ethics as guiding principles for a new life and society. The insistence on both individual and collective transformation for a successful revolution is also unique.

There are some notable absences in this book too. On controversial issues, Dirik is careful not to state her own opinion. Commenting on Öcalan’s apparent renouncement of his entire belief system while on trial and facing the death sentence, she says only this: ‘Many framed Öcalan’s political defence in court as a sign of surrender, even betrayal of the Kurdish cause.’ Similarly, there are references to violence within the PKK in the 80s and 90s, but it’s skimmed over without any real sense of what Öcalan said or did about it.

She references the discomfort felt by non-Kurdish sympathisers to the cult of ‘Apo’, a reference to Öcalan, the father. ‘Most people are perplexed whenever Kurdish women point to an “unelected” man from a feudal-conservative region like Riha as their leader in their construction of an anti-patriarchal, radical democratic life.’ She seems to justify it by sidestepping into a discussion of what he means to the Kurdish people.

Much is made of the tradition of criticism and self-criticism within this political tradition. Time is set aside in all sorts of collective activities for this to take place, in order to refine and progress the movement. Dirik says this takes place behind the scenes, away from the gaze of men, so that women don’t feel inhibited. For feminists, like myself, active in a very different political context, and witness to the way in which our movements are torn apart by differences of opinion, it would have been hugely beneficial to be given concrete examples of the ideological divisions within the Kurdish women’s movement and how these are resolved. For example, Dirik tells us about the class contradictions between the women who join the Movement, incorporating the university-educated, urban woman and the more tradition-bound rural women. She tells us tantalisingly that it led to ‘formative social conflict in the ranks’ but we get no further detail.

I would have liked to have seen more of a discussion of the relationship between Rojava (AANES) and Assad. Why is Assad standing back and allowing his arch-enemy, Erdoğan, to breach Syria’s territorial integrity? While Dirik talks about the importance of handing back control of the economy to women through the building of co-operatives, I would have liked a better understanding of the economics that sustain the revolution – all of the factors that will determine Rojava’s future. Has Erdoğan’s position been weakened by the deteriorating economic situation in Turkey? Could he be toppled as a result? And what would that mean for the Kurdish women’s movement?

These absences say as much about me, the reader, as they do about the writer. No writer can fulfil all her readers’ expectations. As an insider’s account, I believe, the first of its kind in English, it is an intimate and authentic insight into one of the most important political movements of our time.