Turkey was the first country to ratify the Council of Europe Convention on preventing and combating violence against women and domestic violence (popularly referred to as the ‘Istanbul Convention’). It aims to prevent violence, provide victim protection and to end the impunity of perpetrators

The Justice and Development Party (AKP) was the government in power when it ratified the Istanbul Convention. On the day it was passed in the Turkish parliament, Nurettin Canikli, speaking on behalf of the AKP said: “This convention belongs to us, all the deputies here … It is a very important moment in history”.

Nine years later, the AKP government is rethinking its position. Ultra-conservative attacks that have been made by religious groups and media outlets against the Convention. Women’s safety is coming under increasing threat these days. Several pro-government columnists from outlets like Yeni Akit and Yeni Şafak have criticised the Convention, claiming it represents a big threat to family dynamics and the country.

But the Istanbul Convention is considered to be the first legally binding set of guidelines for countries to prevent violence against women. 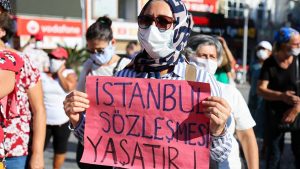 Turkey signed it and one year later adopted Law 6284 (Law to Protect Family and Prevent Violence against Women) in 2012. Despite this law being one of the most powerful tools that protects women against violence in Turkey, like the Istanbul Convention itself, there are various problems with regard to its implementation.

“Instead of working on how to implement it in a better way, the government is considering withdrawing it. We will not let it happen!”, chant women activists in Turkey, protesting the government’s stance in the streets.

The majority of the people are against the withdrawal

However, only 17% of respondents said the government should withdraw from the Istanbul Convention, according to a survey by MetroPoll research.

The Istanbul Convention and Law 6284 have been under attack from ultra conservative groups since the beginning, who argue that it tears families apart, victimizes men and opens the way for the legalization of homosexuality in society. In response to the demands from these conservative groups, President Erdoğan has said: “We are reconsidering the convention and working on it”.

Domestic violence is a huge problem in Turkey. According to the “We Will Stop Femicide Platform” report, 474 women were killed in 2019 alone.

Almost every day, the women’s movement and feminists organize social media campaigns in defence of the Istanbul Convention and demand that the state implements Law 6284. Street protests continue, despite the Covid-19 pandemic, with women wearing face masks and keeping social distance for protection.

International solidarity initiatives have supported women in Turkey protesting against these attacks against the İstanbul Convention. Celebrities including Nicole Kidman, Christina Aguilera and Eva Green have shared their pictures on social media, showing their support for the Turkish women’s campaign about the Istanbul Convention. Polish women have protested in Warsaw and have called for a global action plan against attacks on women’s rights. Poland has also announced it is planning to withdraw from the convention. Poland’s announcement about the withdrawal has faced great opposition from the European Council.

“Questioning this major treaty, or slowing down its ratification, is a worrying alert and a serious setback for women’s rights”.

Moreover, people against the convention claim that women misuse the convention and the Law 6284 to threaten their husbands. Families and children are suffering from it and homosexuals gain legality from it. However, women activists argue that `leaving the convention will give courage to potential killers`.

The Istanbul Convention started a big debate in the country and has even divided the Justice and Development Party (AKP). KADEM, an important NGO (where one of the founders is President Erdoğan’s daughter, Sümeyye Erdoğan), declared that they are against its withdrawal. Some ministers from AKP have taken a similar position including the Minister of Family and Social Policy, Fatma Betül Sayan.

Although some ministers have declared their support for the withdrawal, Turkey Thought Platform, an ultra conservative lobby group that was once pro-withdrawal, has instead withdrawn from the debate altogether.

“We, as a platform, withdraw from this debate and we will not be a part of this debate anymore. We are tired, and it is not possible for any parts of the debate to work together anymore”.

AKP’s meeting regarding the convention has been postponed as well. Consequently, the future of this convention still remains unclear in the country.