Frustrated that the UK government does "Turkey’s dirty work here in UK, charging Kurds under our Terror Act," Margaret Owen challenged the Attorney General to arrest her by sending him a photo of herself with members of the YPG and YPJ.

UK barrister and prominent human rights campaigner Margaret Owen OBE tweeted on Wednesday over her frustration at the manner in which the UK government continues to “do Turkey’s dirty work here in UK” in a number of ethically objectionable ways.

Margaret Owen OBE is the Director of Widows for Peace through Democracy and is also a Patron of Peace in Kurdistan, a UK barrister and an international women’s human rights activist who has visited Rojava and spoken out about the UK government’s unethical ‘relationship’ with Turkey in relation to its arms trade, criminalisation of the Kurdistan Workers’ Party (PKK) and Kurds in the UK and its disregard for human rights violations undertaken by the Turkish government and armed forces in Turkey, Iraqi Kurdistan and Syria as well as elsewhere.

She tweeted: “I’ve just sent this, my favour[ite] pic” – namely one in which she is seen with YPG [People’s Protection Units] and YPJ [Women’s Protection Units] members in Rojava – “to my attorney general. I should be arrested. We do Turkey’s dirty work here in UK, charging Kurds under our Terror Act, refusing to delist the PKK [the Kurdistan Workers’ Party]” and “selling terrorist Erdogan arms.”

Medya News approached Margaret Owen regarding the tweet. “The reason why I sent that tweet in the middle of the night is that it suddenly gets me. They are harassing Kurds here or anybody who supports them. That’s why I again sent that picture of me which I’d sent to previous attorney generals,” she said.

“This government does Turkey’s ‘dirty work’ here so,” via this protest action now, “why aren’t they arresting me? I’m out there supporting those who they call ‘terrorists.’ What also triggered this is the fact that a few days ago when Priti ‘Horrible’ Patel was in Washington, she stated she was putting Hamas on the list without a proper debate about, obviously, Israel. (…) Yet they have kept the PKK on the list and then we have the wonderful example of the Court of Cassation in Belgium that has delisted the PKK. That’s what made me react.”

She also noted that a Conservative member of the House of Lords recently asked parliamentary questions over related concerns, including the alleged and reported use by Turkey of chemical weapons in Iraqi Kurdistan. And what was the response from the relevant UK government ministers?: “The answers we get back are just unbelievable. I mean, crazy. The answers are absolutely pathetic. They absolutely don’t answer the question. Why do we ask the questions at all if all we receive are derisory responses?” she asked.

In an earlier podcast interview with Medya News, Owen had detailed her frustrations regarding the UK government’s stances towards Turkey: “We have, since 2005, an international arms treaty in which over 153 UN members agreed that they would not sell arms to regimes that violated human rights.” Turkey is clearly violating human rights in an extreme fashion, she had noted, and yet the UK government continues to promote an arms trade with it and extend extensive diplomatic support to it. 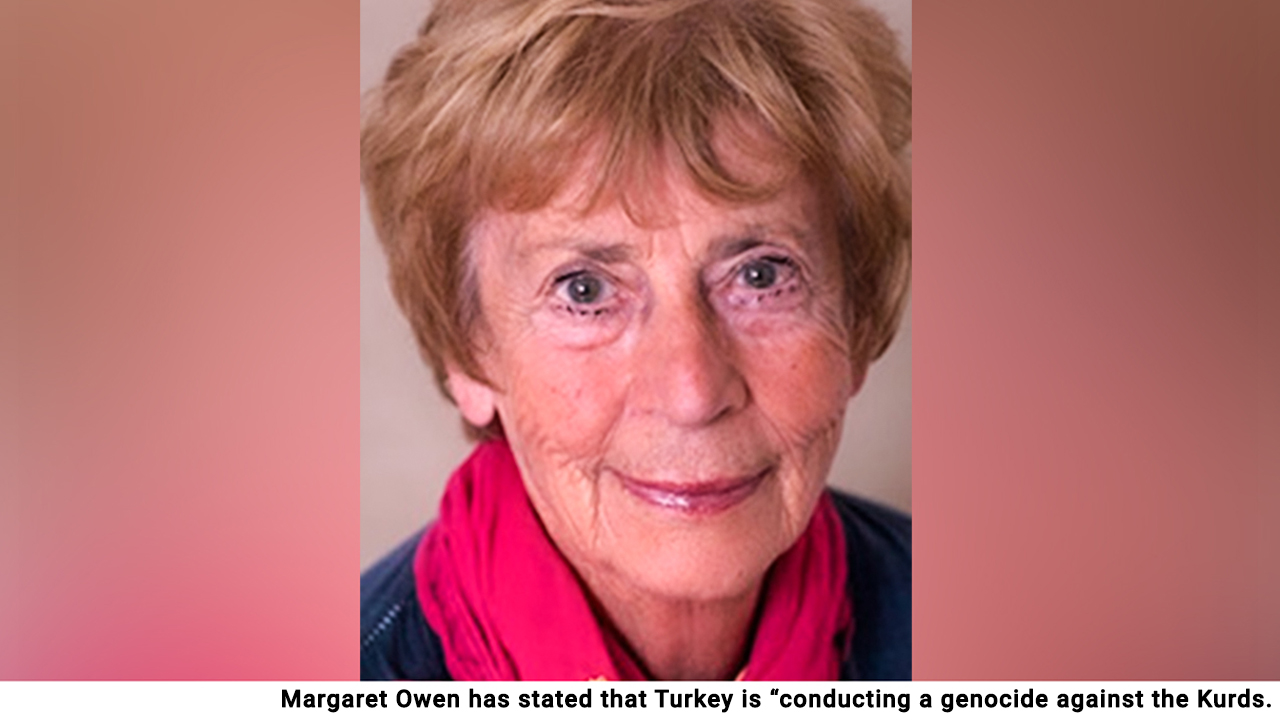 Turkey is “conducting a genocide against the Kurds,” she added, “and when it entered Syria, supported by NATO, that is questionable as Turkey was not being attacked by Syria. It went in rhetorically to fight ISIS. But, in fact, it went in to attack the Kurds. And there is much evidence of how it was actually supporting jihadist militias including ISIS.”

And recently, Owen highlighted, we have heard through multiple reports “that Turkey, not only in Syria but in northern Iraq, is using chemical weapons, and is attacking Sinjar, the homeland of the Yazidis. (…) It is attacking schools and hospitals, the Maxmur refugee camp, home to 12,000 Kurdish refugees.”

And yet, despite this, she noted that Turkey remains “one of the UK’s greatest allies. Extraordinary, with all the evidence of what Turkey has been doing both in southeast Turkey/northern Kurdistan, in Southern [Iraqi] Kurdistan (…) and in Syria, in violation of international law. Turkey is not even on the list of ‘countries of concern’ that the Foreign Office keeps. As for the arms trade, ever since Brexit, this government is keen to go anywhere to find countries that we can sign trade deals with and sell arms to.”

She added: “When I think about what Turkey is doing in Syria, it is attacking Rojava, that is the Autonomous Administration of North and East Syria (AANES), which is home to the most miraculous, unique, extraordinary women’s liberation movement – the Kurdish women’s liberation movement which is a model for, I think, every country in the world, including our country, because it puts women’s empowerment and gender equality absolutely central.”

Yet, strengthened and empowered by its arms trade with countries like the US and UK, and the silence of the ‘international community’ – inclusive of the UK government – regarding Turkey’s extensive human rights violations, war crimes and crimes against humanity, Owen noted that Rojava, the centre of this “most miraculous, unique, extraordinary women’s liberation movement, is exactly where Turkey is attacking and the UK government is silent.

“It is unbelievable that we should be supporting” a government “which is so overtly misogynist, which is cracking down in Turkey on women’s NGOs, which is imprisoning women lawyers, women journalists, women’s rights organisations and we are silent even when it is going into northern Iraq.”

It is “extraordinary that we continue to support a country like Turkey which is conducting such massive war crimes and crimes against humanity on such a massive scale not just in Turkey but in Syria and in Cyprus and in northern Iraq, also in Libya.” Such support was being extended, she cautioned, at a time when those being targeted by the repressive Turkish state should be supported.

“You know, in this country, we also persecute and harass Kurdish activists here. And people who have gone to Syria to fight, to support the People’s Protection Units (YPG) and the Women’s Protection Units (YPJ). When they come back, they are also prosecuted, charged with supporting ‘terrorist organisations.'”

“Our silence is shameful, we should be leading the world in stopping all arms manufacture and arms trade to countries like this.”

Referring to Turkey’s President Erdoğan as “a war criminal, who should be prosecuted at the International Criminal Court (ICC) for crimes against humanity,” Owen highlighted her concerns: “It was the YPG and the YPJ – those defence forces of the Kurds – that were the only local troops on the ground fighting ISIS [at a key time]. We allowed Turkey to come in to take Idlib, to take Afrin. (…) They were using ethnic cleansing, they were supporting ISIS: thousands of Kurds had to flee, flee Afrin that was Kurdish, and many of them are now internally displaced persons (IDPs) or in refugee camps. (…) And we are silent.

For Margaret Owen: “In Turkey, there are so many women now in prison, women who were MPs, women who were co-chairs, mayors, lawyers, journalists. (…) And when women are in prison, (…) they can be tortured in all sorts of other ways, (…) and these are things that are going on in Turkey’s prisons all the time. (…) And we’re going to see many more deaths [in prison], of men as well. Women on hunger strike seem to be even more vulnerable than men. (…) So it is extraordinary that we continue to support Turkey.

“We have to keep speaking up. Our silence over these arms sales makes us, the UK government, complicit in war crimes and crimes against humanity, so it’s important that we keep up the struggle and we keep up speaking and asking our government to change its policy.”