This March, a team of dedicated volunteers was getting ready to launch the 11th London Kurdish Film Festival, scheduled for the following month. Venues had been booked and hotel accommodation arranged, when, as with every other gathering and performance, lockdown brought all plans to an abrupt stop.

No-one should dismiss the horror of this pandemic, but we can still welcome those new opportunities that it has brought or highlighted – including the flowering of international connections and cultural links over the internet.

From 15 – 24 August, people across the world will now be able to share in a rescheduled and reprogrammed London Kurdish Film Festival. The organisers have secured sponsorship, and all viewings will be freely available on Youtube. They will premier at the scheduled time, but continue to be available for another couple of days to suite different diaries and time zones.

As the co-ordinator, Avesta Kadir, explained to KBS Kurdish radio, feature films require complicated licenses and are not easy to put on line, so they have made the decision to show only short films; but this has given them the opportunity to showcase new and young film-makers.

The fifty films chosen include documentaries, fiction and animation, and have been divided into themes by subject. The festival programme includes Q and A’s, master classes, and panel discussions. Film festivals also award prizes, and this one is no exception.

This online presence will prove a further milestone for a festival that began as a local event for the London Kurdish community back in 2001, and now claims to be ‘the biggest film festival of its kind, bringing together films from four parts of Kurdistan and the rest of the world to audiences in London’.

One of the purposes of the first festival was to reclaim films by Kurdish directors that, rather than being seen as Kurdish, were categorised by the nation-state in which they were made. Many of the films that are shown are overtly political, but all cultural expression has political significance for a people whose culture is habitually denied. The festival website explains that the Kurds: “like all oppressed nations, transformed cinema into a tool for emancipation and self-expression”. 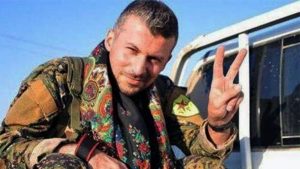 In a poignant reminder of the political significance of the festival, this year’s programme includes a documentary about Mehmet Aksoy, who was on the festival management committee and was killed while filming in Raqqa.

The full programme and links to the films can be found on the festival website.