LGBT Boğaziçi students share their messages: United we will win

The protests against the trustee rector imposed on Boğaziçi University by President Recep Tayyip Erdoğan continue since 1 January. Medya News talked to LGBTI Boğaziçi students who have been at the forefront of the university student’s resistance.

According to a statement made by Deputy Minister of Interior İsmail Çataklı on February 4, 2021, 528 people who took part in protests supporting the Boğaziçi students were detained in 38 provinces of Turkey.

Two of these people have been imprisoned and 498 people were released, 108 of them are under judicial control. While 28 cases were continuing in Istanbul, Deputy Minister of Interior İsmail Çataklı said that among 45 people who were detained 22 of them have connections with ‘terrorist’ organisations.

The Boğaziçi University lesbian, gay, bisexual, trans, and intersex (BÜLGBTI +) community announced on February 18, 2021, that 9 people have been arrested and 25 people are under house arrest. 3 people were forcibly abducted by the police on February 18, 2021, in Ankara, were tortured and later dumped on an empty field. Their ‘crime’ was joining the protests. Today, Boğaziçi University and Hisarüstü Neighbourhood are still under a heavy police blockade that has continued for 45 days.

Presidency’s Director of Communications Fahrettin Altun shared on social media that Boğaziçi University lesbian, gay, bisexual, trans, and intersex (BÜLGBTI +) Studies Club was shut down. According to the decision signed by Boğaziçi University Rector Melih Bulu, the application of Boğaziçi University lesbian, gay, bisexual, trans and intersex (LGBTI +) Studies Club for an official club status has been denied. The reason for this was an exhibition, which was not organised by the club itself and included works that challenged Sunni Islam’s hegemony and homophobia such as a picture of Mecca’s Kaaba that included an LGBT flag and picture of the Kurdish female cultural mythological character, Shahmaran.

In response to the homophobic hate speech against lesbians, gays, bisexuals, transgender and intersex people (LGBTI +), and against the closure of the Boğaziçi LGBTI + Studies Club and police violence, a petition was organised and has been handed in. The #beraberiz (we are together ) petition started on the 7th of February and 328 non-governmental organisations signed the petition in a week. The signatories and the full text of the statement can be seen here.

“We want both the police who attack the students and the state appointed trustee rector Melih Bulu to immediately leave our school. I am ashamed of being in the same place with those people who just do whatever the government says. We knew that the student clubs were going to shut down because people like Melih Bulu are afraid of organised youth and they are afraid of us, the LGBTI+people. We will continue to resist as we did in the past,” said Umut, a Boğaziçi University student and a LGBTI+activist. 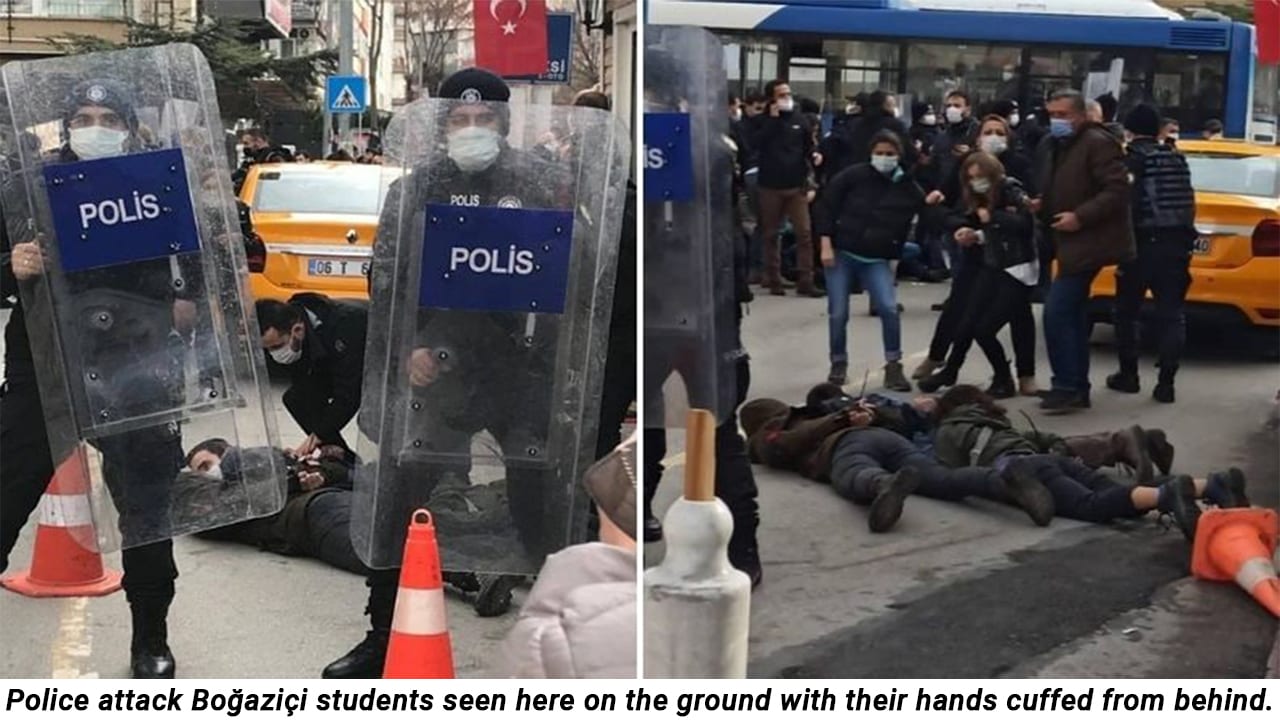 Another student Helin agrees with him.“They are afraid of us today like they were afraid of us in the past. We want the right to study in our universities that we won. We women are always against oppression and violation of rights,” she said.

The resistance of the Boğaziçi students is not only limited to the university campus according to her.

“Not only at Bogazici University, but we will also continue to resist everywhere in Turkey and Kurdistan. The Justice and Development Party (AKP) in Turkey have attacked the beautiful people of this country, they only care about the capital and their people, we can see that as socialist women, and we have been fighting against it for years. ”

Another Boğaziçi University student Mehmet Emin said that the appointment of Melih Bulu as their rector was not a surprise for them and that they had been expecting a rector to be appointed.

“This should not be thought of any differently from the AKP state appointed trustees that were forcibly imposed upon the HDP municipalities,” said Mehmet.

“We should remember that these trustees were first appointed to the cities of Kurdistan. If we protested then, maybe things would have been different today. The government does not want any opposition. These protests are held by queer people, women, the opposition groups, if we end our struggle now the whole country will be governed by these state appointed trustees. We also demand that our detained friends be immediately released.”

LGBTI+ student and activist Baran said that LGBTI + students are one of the most organised groups in Boğaziçi university and said that the LGBTI + Club was closed because the AKP recognised and was threatened by the high level of organisation within the LGBTI+ students society.

“We, as LGBTİ+ students, respect the right to live and protect ourselves. If we defended our rights in Kurdistan, if we were able to stop the human rights violations in Kurdistan, today we would not be fighting with the ones in power. There are now trustees everywhere, in cities and universities. This is not fair or just. We do not accept this and we will continue to resist. Do not leave us alone, we will win if we stand together. We only know that united we will win!”