The content of letters that were written and signed by the Turkish prisoners who were killed during Turkey’s military operation in the Gare region of Iraqi Kurdistan – addressed to Turkey’s President, Parliamentary Speaker and the Chair of the Republican People’s Party (CHP) in September 2019 – were published by Fırat News Agency (ANF).

The Turkish state launched a cross border military operation into Iraqi Kurdistan that was called ‘Operation Claw Eagle 2’ on 10 February in Gare Mountains. The operation continued for three days. During the Gare operation, thirteen Turkish soldiers, police officers and Turkish National Intelligence Agency (MIT) officers, who were being held as prisoners in a People’s Defence Forces’ (HPG) camp, were killed. The HPG and Tiurkish state versions of who was responsible for the killings markedly differ from each other.

Prisoners demand in their letter: ‘What about us?’

”Is it because the people here are not popular in the media or come from very rich families that we are not given the necessary attention and we are not protected? We cannot even imagine that Turkish soldiers and police officers have not been protected by the Turkish authorities for more than four years”, the letter stated.

The letter continued: ”For instance, whether or not even Turkish citizens can be rescued by the authorities, similar to people in the Mosul Consulate under the occupation of the terrorist organization ISIS in 2014 and captured by terrorists in Nigeria, FETO members in Gabon, the Ukrainian soldiers arrested by Russia, the release of the Crimean Tatars. As a result of dialogue and initiatives for captives, we see calls for the release of the Japanese journalist in the hands of Al Qaeda. However, we for years have been wondering when time will come for us to hope”.

Further contents of the letter were published. The prisoners wrote: ”Over the years, nobody could, and still cannot, guarantee our safety and health. How they get even our corpses from here when even we do not have protection? If the Presidency and the Turkish Grand National Assembly will not ensure our freedom, who is there to protect us? We have been separated from our families for more than four years. In that situation, what should we do? Who can we appeal to?’ 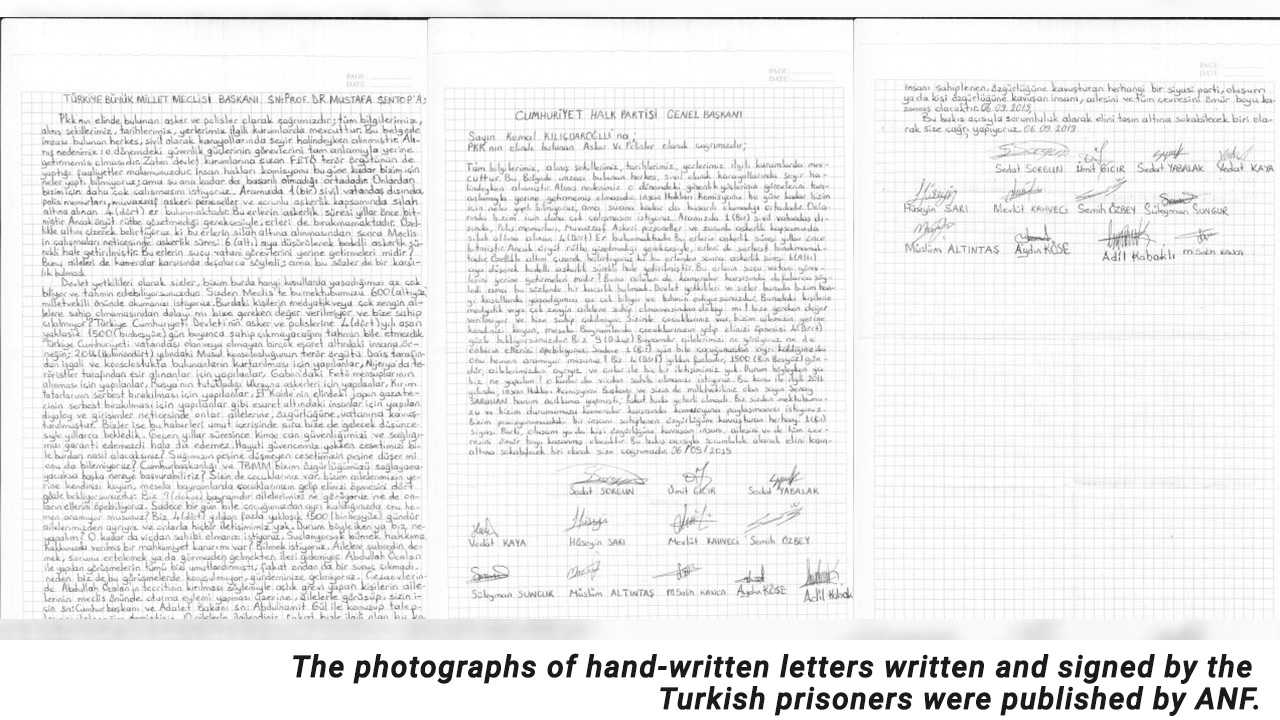 ”We have a right to know if we have been accused: Is there a conviction against us? We want to know. Calling families to be patient means delaying the problem or ignoring it. Dialogue with Abdullah Öcalan gave us hope, but there was no result from that either. Why do you not mention the outcome of these meetings? After that, the families went on hunger strike and there were sit-in protests in front of the Parliament requesting the breaking of the prison isolation of Abdullah Öcalan. The President and Minister of Justice said that we would talk to Abdulhamit Gül and convey your demands. Any political party, formation or person that rescues us in this regard will win the support of his family and relatives. With this point, we call on you to take on responsibility”.

The prisoners also wrote a letter to CHP Chair Kemal Kılıçdaroğlu on the same date. It states: ”In 2016, Ms. Şenal Sarıhan, the President of the Human Rights Commission and your deputy, made a statement on this issue, but that was not enough. We ask you to share our letter and express or situation with the public. It is our call to you to take on responsibility”.

Sedat Sorgun, one of the prisoners, addressed President Erdogan in his letter: “Dear President, God’s mercy and blessing you and our country. Four years have passed, but nobody has not come for us … Leaders of the organization tell us: ‘We can only let you go if the authorities ask for you … but nobody will protect you if we let you go now: the state will kill you’, they say. When Hakan Atilla, Deputy Director of Halk Bank, returned to the country, you said: ‘Hakan Atilla is our son, we will protect him. What about us? We are here, too”’.

The prisoners also wrote letters to their families

The prisoners also wrote letters to their families. In these letters, the prisoners generally detailed their situations, longings, expectations and disappointments. For example, in the letter of Muhammet Salih Kanca, he states: “The media does not bring the issue to the agenda in any way. There may be many reasons for this … But it creates hope for everyone here if state officials make a statement about our situation. We are hiding here like it’s a sin: this is one of the burdens on us”.