‘Just the tip of the iceberg’: Zack Kopplin on revealing the Barzanis’ secret properties in the US

A young American investigative journalist, whose work is dedicated towards exposing corrupt politicians, has just revealed the astronomic wealth of Iraqi Kurdistan’s ruling Barzani family in the US that adds up to the “largest real estate purchases” in Beverly Hills history.

Iraqi Kurdistan may sound too far from glitzy Miami beaches to you, but Zack Kopplin has recently showed that it is not when it comes to the Barzanis, who have been ruling this semi-autonomous Kurdish region in northern Iraq that has been shaken for weeks with massive protests by students who the Barzani government has refused to pay monthly stipend allowance payments to.

Student protests are the latest and most visible signs of discontent, but they are not the only phenomenon that shows that there are serious underlying systemic issues and concerns in Iraqi Kurdistan, and Zack Kopplin’s 7 December article, ‘Cowboy Drugstore’ has opened a new window into the roots of the social and economic crisis in the Barzani-ruled lands of the Kurds, thousands of whom had been left with no choice but to seek refugee in Europe, having become unable to afford the high living costs of water, oil, electricity and all basic services with the very little money they had left at hand. 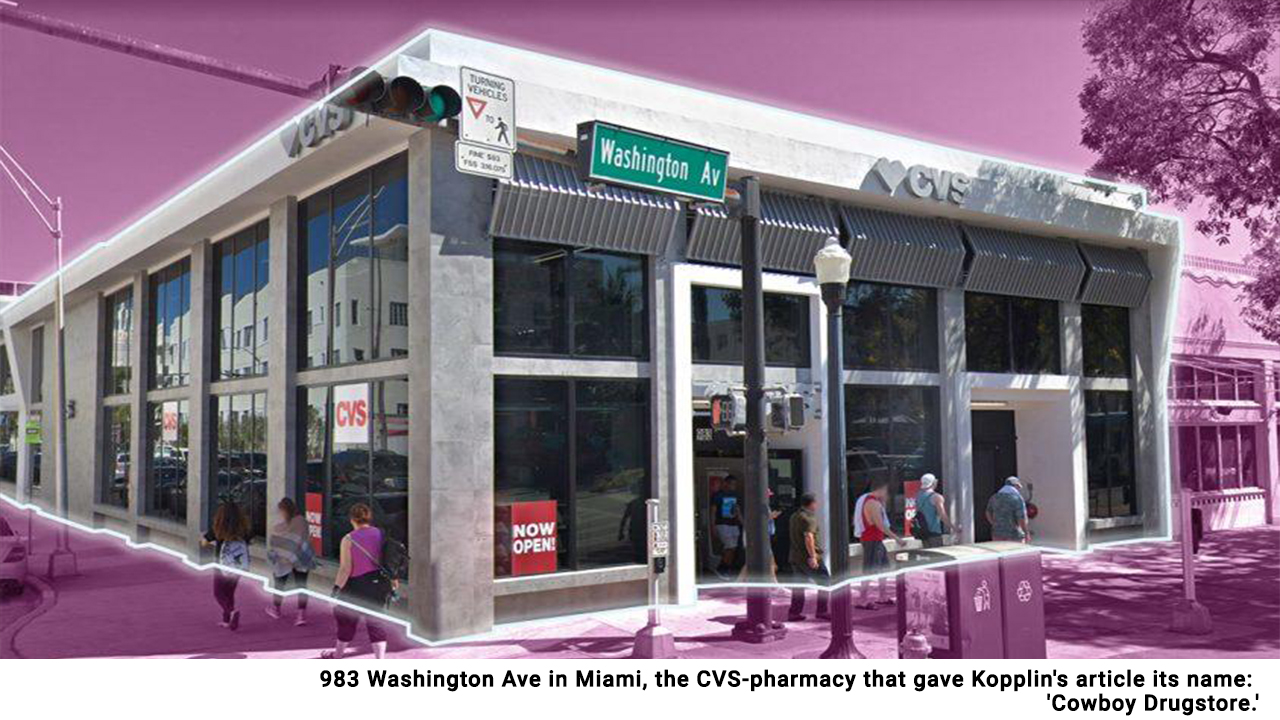 Whilst people of Iraqi Kurdistan strive to survive in poverty, Kopplin has caught the Barzani family hiding money in America “four times” with their four secret properties, which also includes mansions in California and Virginia, the total value of which is $75 million. “These investments likely represent only a small fraction of the family’s secret wealth in the United States,” Kopplin wrote.

In this exclusive interview with Zack Kopplin, the young investigative journalist spoke to Medya News on his years-long investigation to reveal the secret properties of the Barzanis in the US and his wider perspectives on the corruption of the Barzanis, sharing his estimates on the possible total value of all properties he believes that the family owns in the US, not to mention their wealth in Dubai.

Kopplin never minded 9-hour difference between us and agreed to share his views just when he was about to take his dog outside for a walk that he named after one of the ‘La Casa De Papel’ characters, a TV-series Kopplin unsurprisingly likes a lot!

‘How much money have they hidden?’ 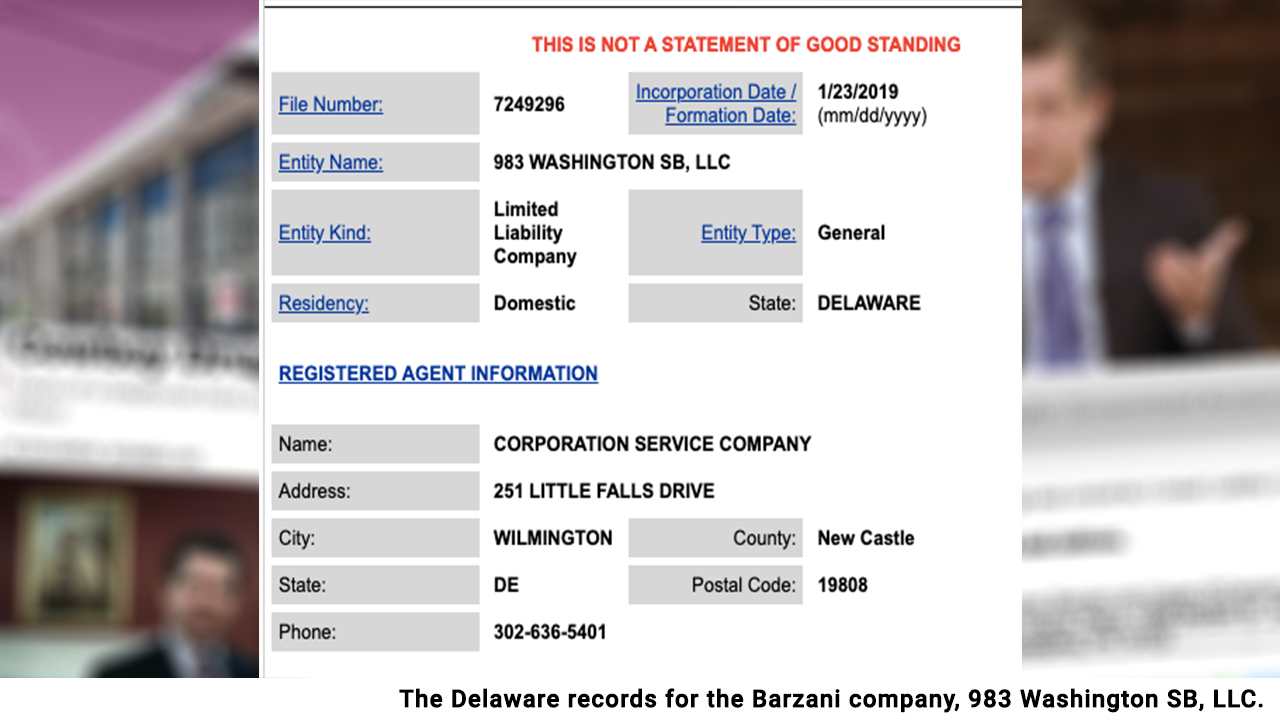 Kopplin has been working on ‘Cowboy Drugstore’ for about the last six months as part of his ongoing investigations on corruption in Iraq for almost four years. He first found deals between American military companies and Iraq’s former Prime Minister Nouri al-Maliki’s companies that led him to deals of “very high prices” between American military contractors and the Barzanis (More on this can be read in this link).

After he came up with the name of the Barzanis on secret oil deals in Iraq, he later on “bumped into” a document on a tool he used that had Masrour Barzani’s name on a company. He then figured out that this was linked to an American pharmacy in Miami, right by the beach; a valuable property of about $18.3 million.

“We know about four different properties, we know about two mansions in Beverly Hills, California, we know about a mansion in Virginia, and now we know about the CVS in Miami. And those are the four we discovered. But there has to be a tonne more,” Kopplin told Medya News.

He says that he was able to spot a mistake on papers by the lawyers who were dealing with covering-up Barzani properties. “It is unimaginable that lawyers mess up on every single property they own,” he notes.

Estimate of Barzanis’ wealth: ‘As much as 50 billion dollars’

We asked the same question back to Kopplin, since he mentions that he was onto other properties that he suspects that the Barzanis own, but since the lawyers did not mess up with those papers, he was unable to find a crack in the related documents to lead him to the Barzanis.

“This family has estimates, put in the math, tens of billions of dollars. I’ve heard as much as 50 billion that the family controls, maybe more, maybe a little bit less,” he says.

“Either way, you are talking an insane amount of money. And a lot of money comes from government deals, so that comes from extorting private companies which also hurts the people.” 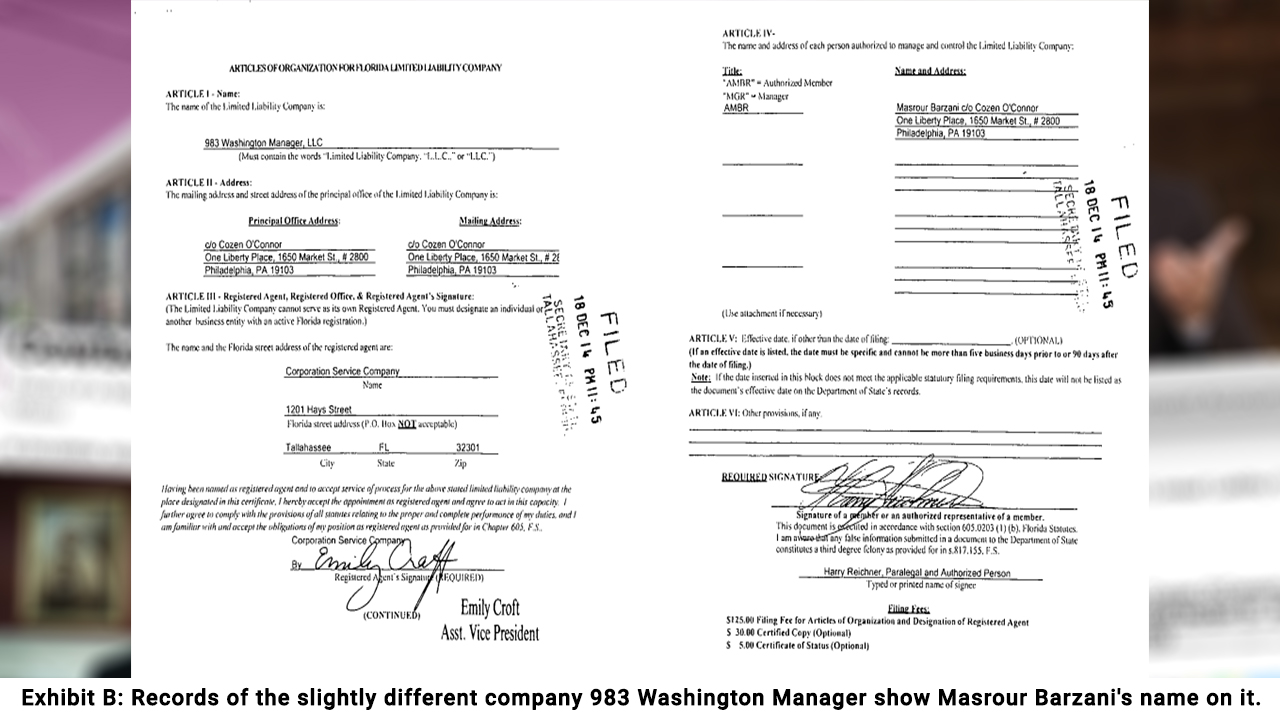 “You are telling me the government does not have that money, but this one individual family has it.”

Kopplin is aware of the historical roots of the Barzani family, as they were much respected names in their history, who were deeply respected by the Kurds and Middle Eastern people in general.

“The Barzani family did not start 150 years ago with billions of dollars: that money came when they were in power. So, where do they get it from? Presumably, they got it from the government, and that money could be used to pay people’s salaries, but it has not been done.”

‘I have heard privately that the PM might deny this, but…’

We asked Kopplin if he was contacted by the Barzani family or anyone from the Kurdistan Regional Government (KRG), following his report that fell like a bombshell.

The family has not reached out to him as yet, as he himself wanted to reach them whilst he was writing his report to give them a chance to comment, but the opportunity was left unanswered.

“But I have heard privately that the Prime Minister might deny this. What’s beautiful about this is that you don’t need to trust me. Anyone can go online and look up the documents themselves. So, in my eyes, it’s very hard for them to deny it,” he says, as he actually put the steps on how to reach these US government documents on his Twitter account. 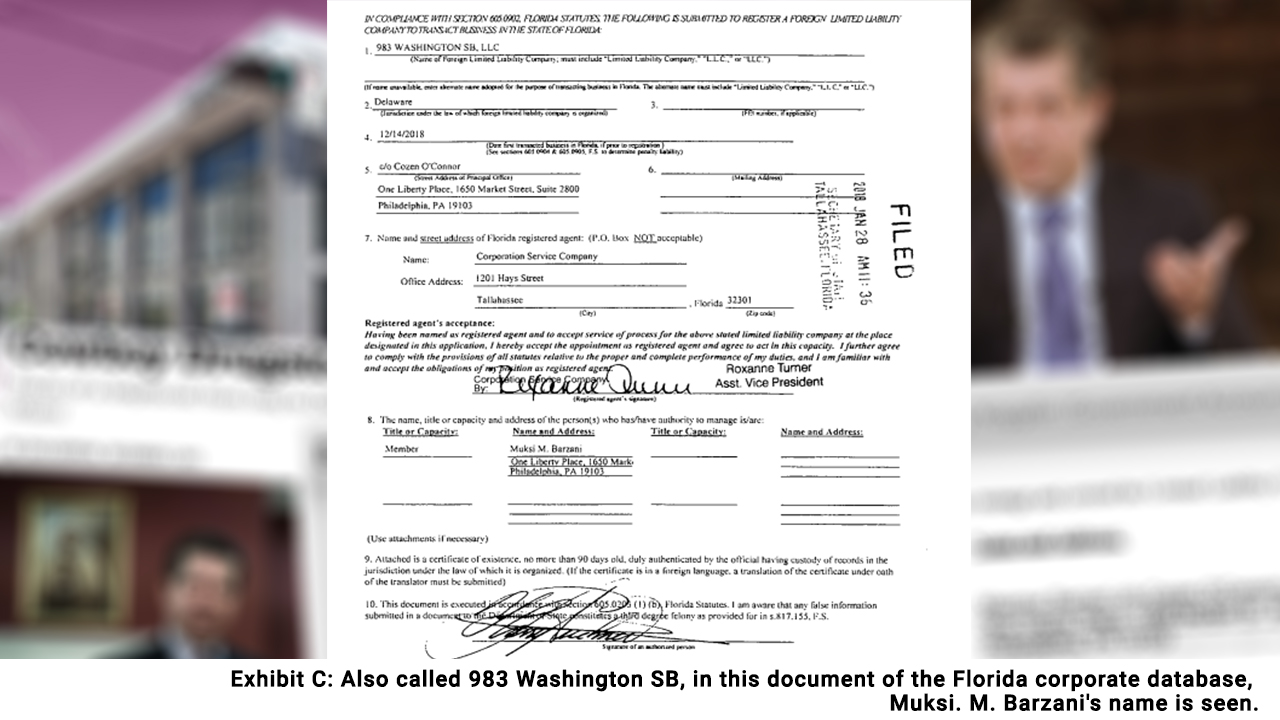 ‘Wanna-be-dictators’ stealing money from their people

Kopplin, in his article, also made some quite political remarks, describing the Barzani rule as a “dictatorship” – that turned his report into something much more than just a leak or exposé document, into what could also be called a political critique of the regime in Iraqi Kurdistan.

“I tend not to be a big fan of dictators or wanna-be-dictators, especially who are stealing money from their people and hiding it. I think it’s important for that to be made public,” he says.

“I would class them as a wanna-be-dictatorship, they are not quite there. But it’s very hard if you are a local journalist to criticise them, to write a story like I did, if you are based in Iraqi Kurdistan.”

“I talked about the Kurdish student,” he notes down one particular name he knows, referring to Zardasht Osman, “who basically made a joke article making fun of Barzani nepotism and was tortured and killed. I think there are currently Kurdish journalists who are in jail for writing about Barzani corruption.” 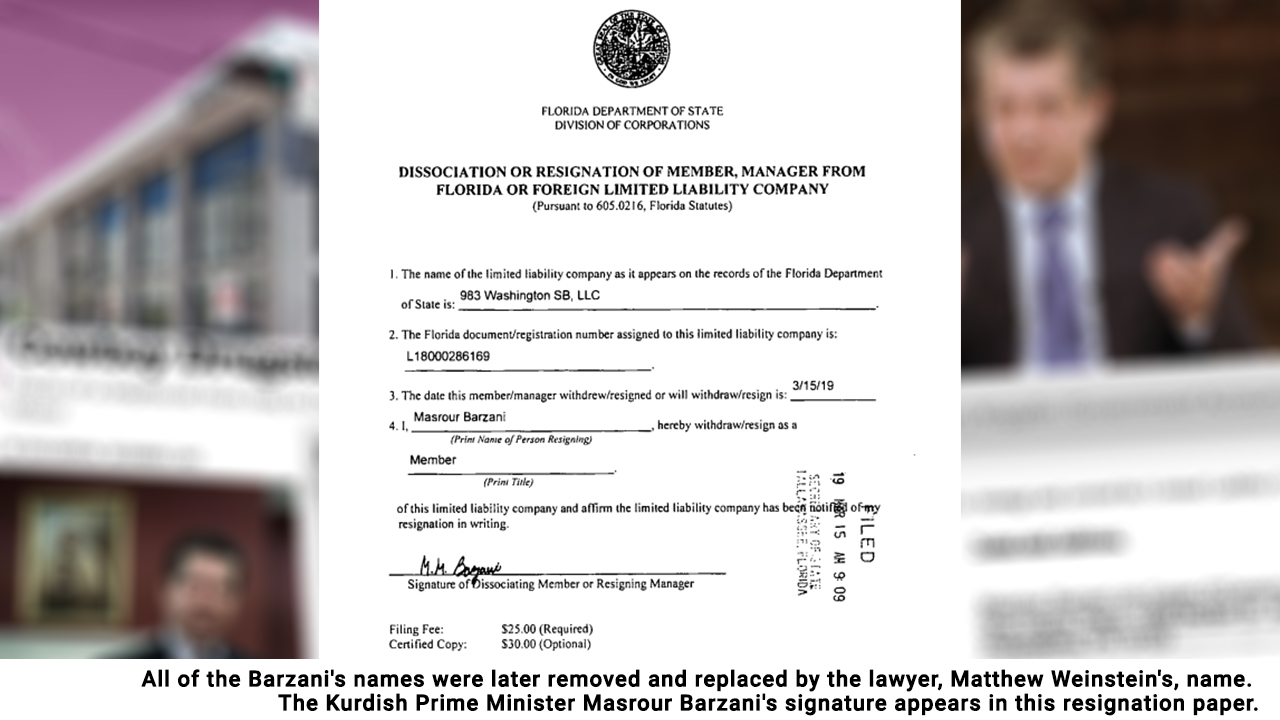 Kopplin also follows the ongoing student protests in Iraqi Kurdistan and he believes the reaction of the KRG is a sign of their “lack of democracy.”

“Whenever there are protests, they are cracked down upon. Ultimately, there is no real ability for people to remove them from power: they have been in power for 30 years. It’s not a pure democracy anymore.”

“The estates, properties, villas, wealth, companies, and bank accounts of the rulers of South Kurdistan [Iraqi Kurdistan] and their families are more than ten times those owned by the whole population of South Kurdistan. Therefore, they become role models of commitment to private property and enrichment, rather than of loyalty to the country.”

These are the words of prominent journalist Ferda Çetin, who authored his latest article just a week ago before the Barzanis’ secret astronomic wealth in the US was revealed by Kopplin.

A coincidence? No. The struggling Kurds, critics of corrupt government and democratic circles not only in Turkey, but also around the world and in the US, have already been speculating about the unearned wealth of the Barzani family that has signed enormous trade deals with the US and Turkey. Prime Minister Masrour Barzani has himself described Iraqi Kurdistan as the “trade gateway of Turkey to Iraq.” According to diplomatic cables published by Wikileaks, not only have US State Department officials conceded internally that corruption in Erbil (Hewlêr) “centres more on the Barzani clan,” but also a US diplomat wrote in a 2006 cable – which WikiLeaks later published – that the core of the corruption of “the godfathers” of Kurdistan Regional Government (KRG) “lies within those who control the security forces. They keep the game running because controlling the guns means they can enforce their illegal contracts.”

The US military and “the wealth from dirty contracts have allowed the Barzani family to cement their control of Iraqi Kurdistan and quash dissent,” Kopplin wrote in a previous article on the story of Iraqi politics and Pentagon oil contracts.

Added on top of all these previous controversies revolving around the Barzanis, Kopplin’s article that was published in the American Prospect has marked the first time ever that documentation relating to the Barzanis’ secret wealth on American soil has been published.

Kopplin believes what he has revealed is “just the tip of the iceberg”. Then, only one question remains: what more does the Barzani family own in the unseen part of the iceberg?