Journalist Ako Mejid reports from the Belarus-Poland border that around 2500 refugees are struggling to survive without food, water and shelter in an area with temperatures below zero during the night as gunshots are also heard in the forests where Belarus police are reportedly shooting at the people.

Thousands of refugees, mostly Kurds from Iraqi Kurdistan, are waging a struggle to survive in the freezing forests of Belarus near the Polish border, and among them there are hundreds of children, elderly and sick, reports Kurdish journalist Ako Mejid.

The refugees however report that they have left their homes in Iraqi Kurdistan due to political and economical reasons; namely because of the absence of basic rights and a democratic government, because of unemployment and sharp rises in the prices of essential goods like water, electricity, gasoline, bread. They’ve left because they lost their hope in the political sytem, in change through elections.

Many have reportedly said that despite their present hardships they do not want to return to Iraqi Kurdistan. 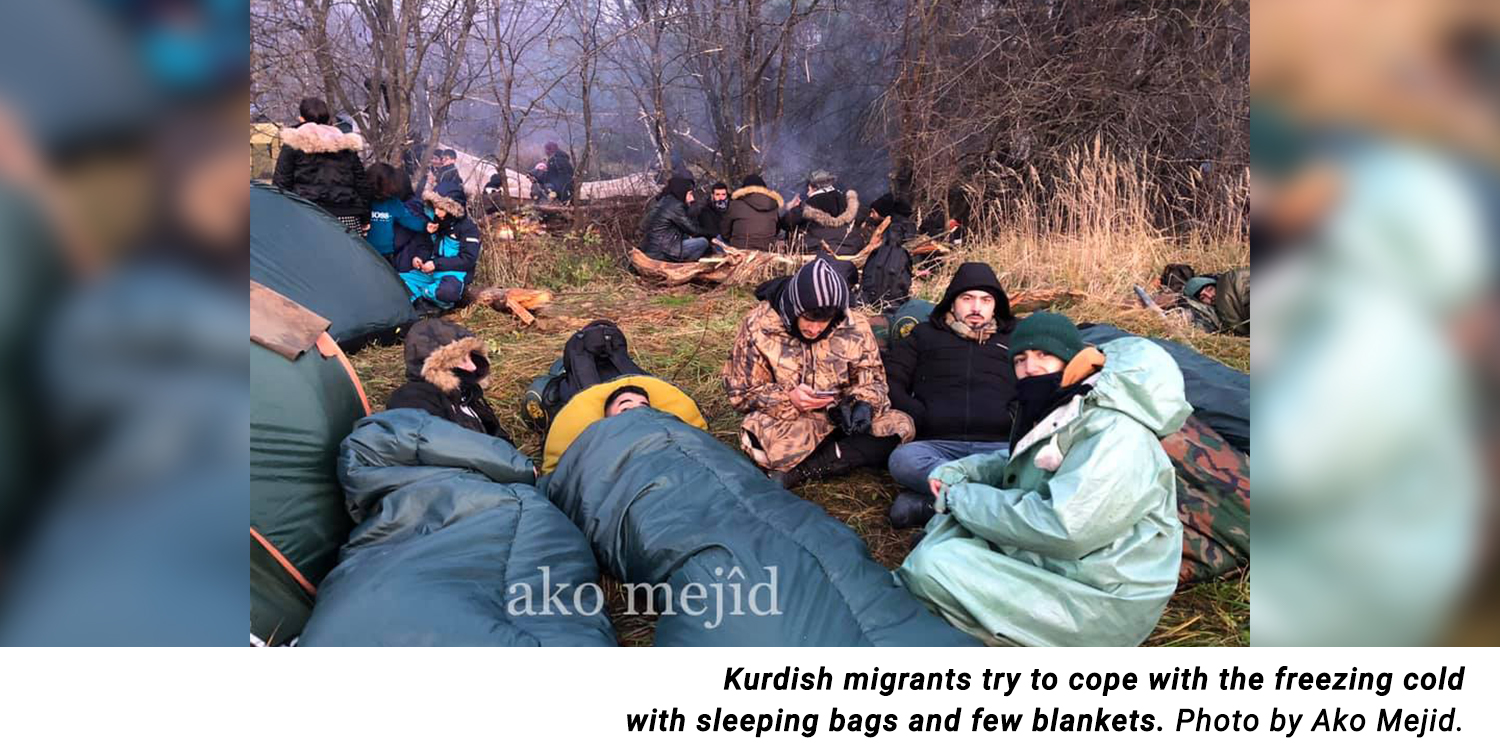 While the refugees have been waiting for days with hardly any food or water, volunteers of non-governmental organisations who aim to provide basic humanitarian help are being prevented from entering the ‘restricted’ zone on the border where the refugees are stuck in limbo.

Refugees had entered Poland from Belarus on Saturday night and were sent back to the military zone in Belarus during the late hours.

Three Kurdish refugees, one of them identified as Geylan Dilêr İsmil, a young Kurd from Sulaymaniyah, Iraqi Kurdistan, died of starvation and the cold as they tried to cross the border, Roj News reported. 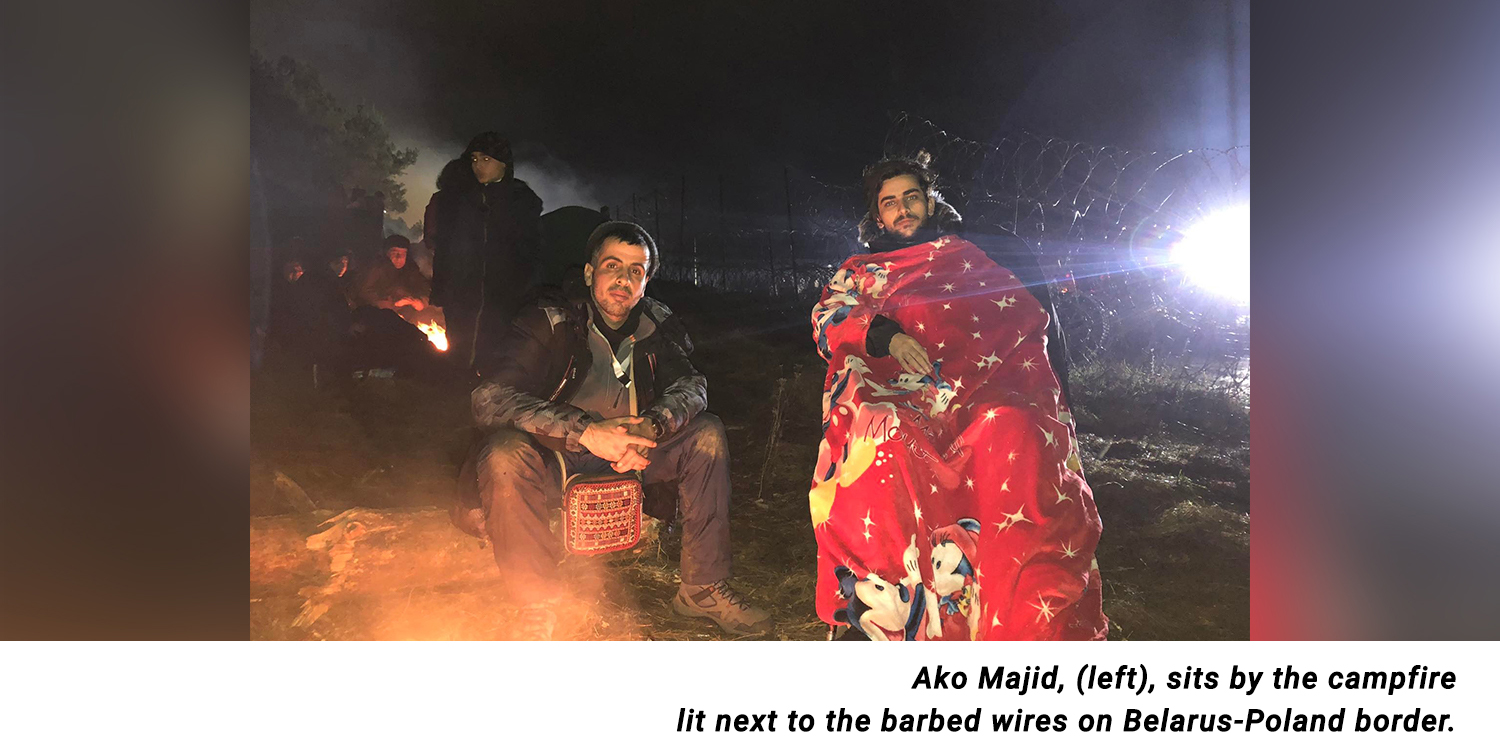 Ako Mejid, who has been following the development of the humanitarian crisis on the border for days now, answered questions from Medya News and provided information regarding the ongoing situation. While Mejid also posted photos on his Facebook page, he made an emergency call for humanitarian aid, especially for food and milk for the babies and children,

Can you please summarise the situation in the Belarus forests now? How many migrants are there? What is the approach of the Belarus and Polish police?

The Belarus police keep their presence right behind the refugees who are waiting on the border with Poland. They say there are 300 refugees, but that’s not true. I believe there are approximately 2,500 and they are now heading from Belarus to Poland. Mostly the refugees had before travelled via Minsk but were not allowed to leave. That is why many had decided to travel via Grodno and then to Poland. The Polish police have not yet physically attacked the refugees but they have used tear gas. 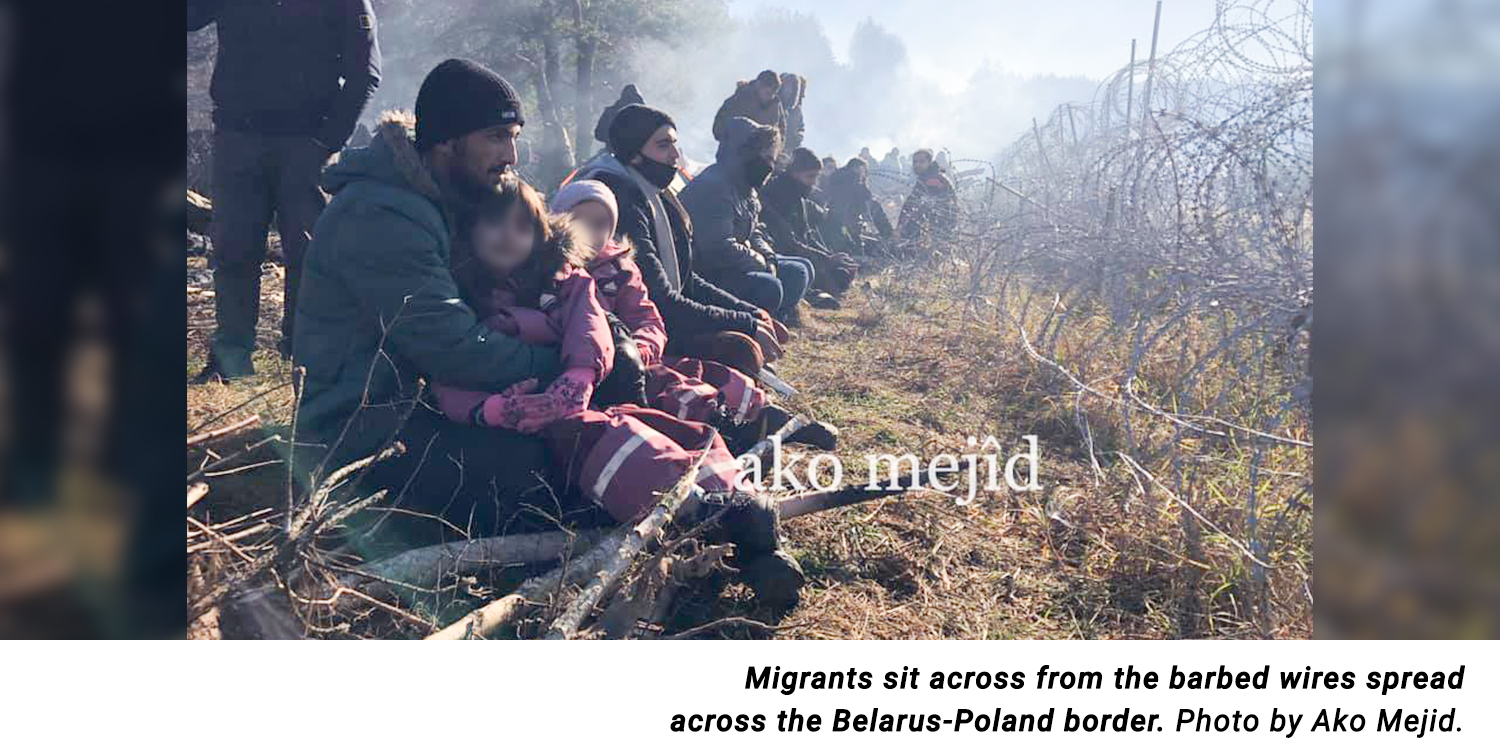 Among the refugees, there are many families. There are around 200-250 children. The situation here is really, really bad. The babies need milk supply and the people need food.

Yesterday night, it was incredibly cold. The tents were all soaking and freezing wet.

People are literally struggling to survive under such dire circumstances. As I talk now, the sounds of Polish police helicopters flying above us are heard. Since the Polish police patrol along the border, nobody is able to take a single step forward to Poland. 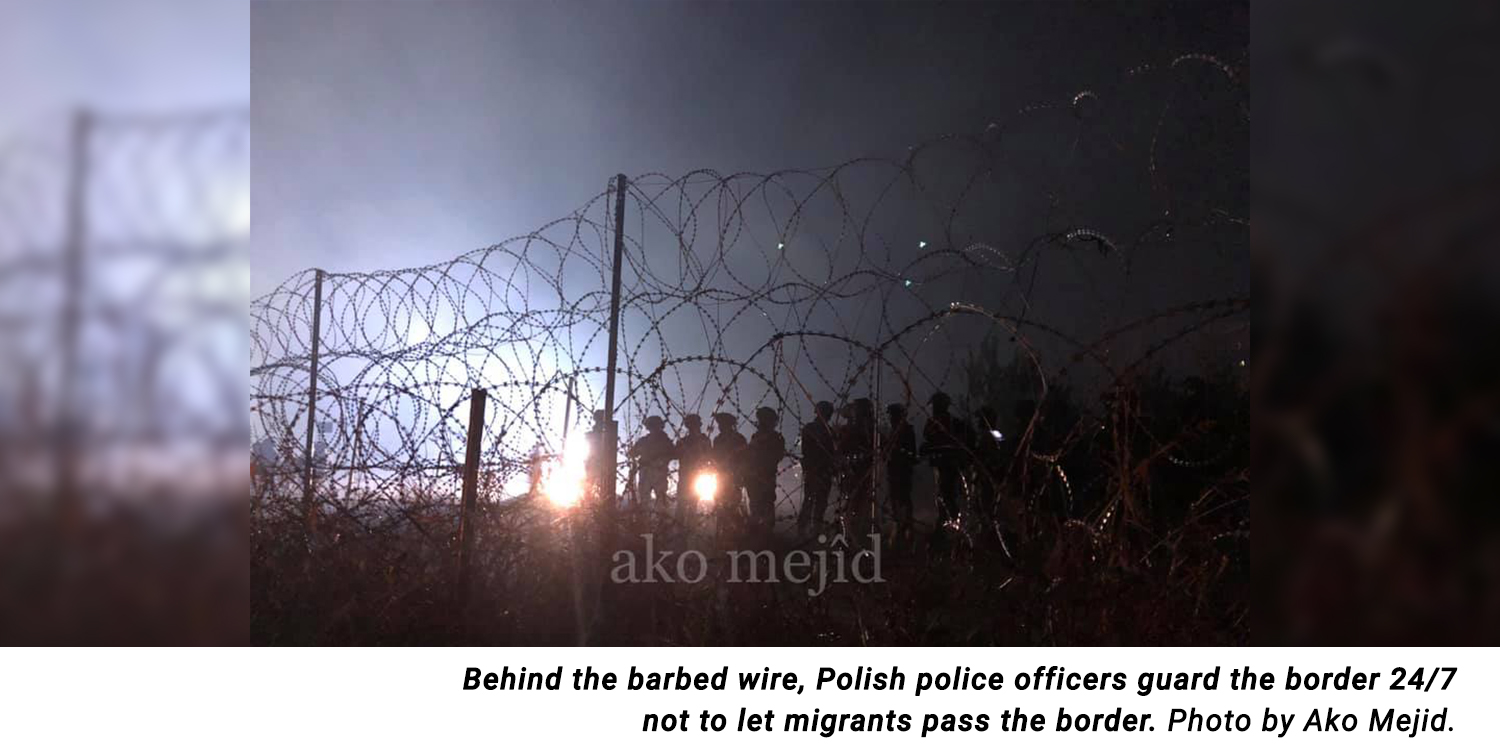 What is the source of the Kurdish migrant wave? Why do so many Kurdish people try to cross Europe so hard that they even risk death?

Most of the people here have fled Iraqi Kurdistan because they say they feel hopeless and blame the system the government has that has been created there.

The essential reason people tell me they are migrating from Iraqi Kurdistan is the lack of human rights, freedom and democracy, and the high rates of unemployment. There are also people, who cannot access urgent medical treatment they need in South Kurdistan, and so want to go to Europe for treatment.

This migration is the result of an anger against both of the political parties that have been in power for years. Amongst the reasons why people are migrating is lack of faith in democracy as seen in the recent elections in Iraq and South Kurdistan. Most people boycotted the elections en masse and did not even vote. This was a product of their hopeless and distrust in the government.

Since people have lost their hope for any meaningful change in South Kurdistan they have taken to the roads to Europe. People are reacting to the Bashur (South) government’s policy of increasing the prices of petrol, gas, diesel, bread, water and electricity. As prices increase, unemployment rises and salaries are not paid. One of the major reasons of the migration is widespread unemployment. Most of the youth study in a college, but after they graduate they cannot find a job, that’s why they want to travel to Europe. 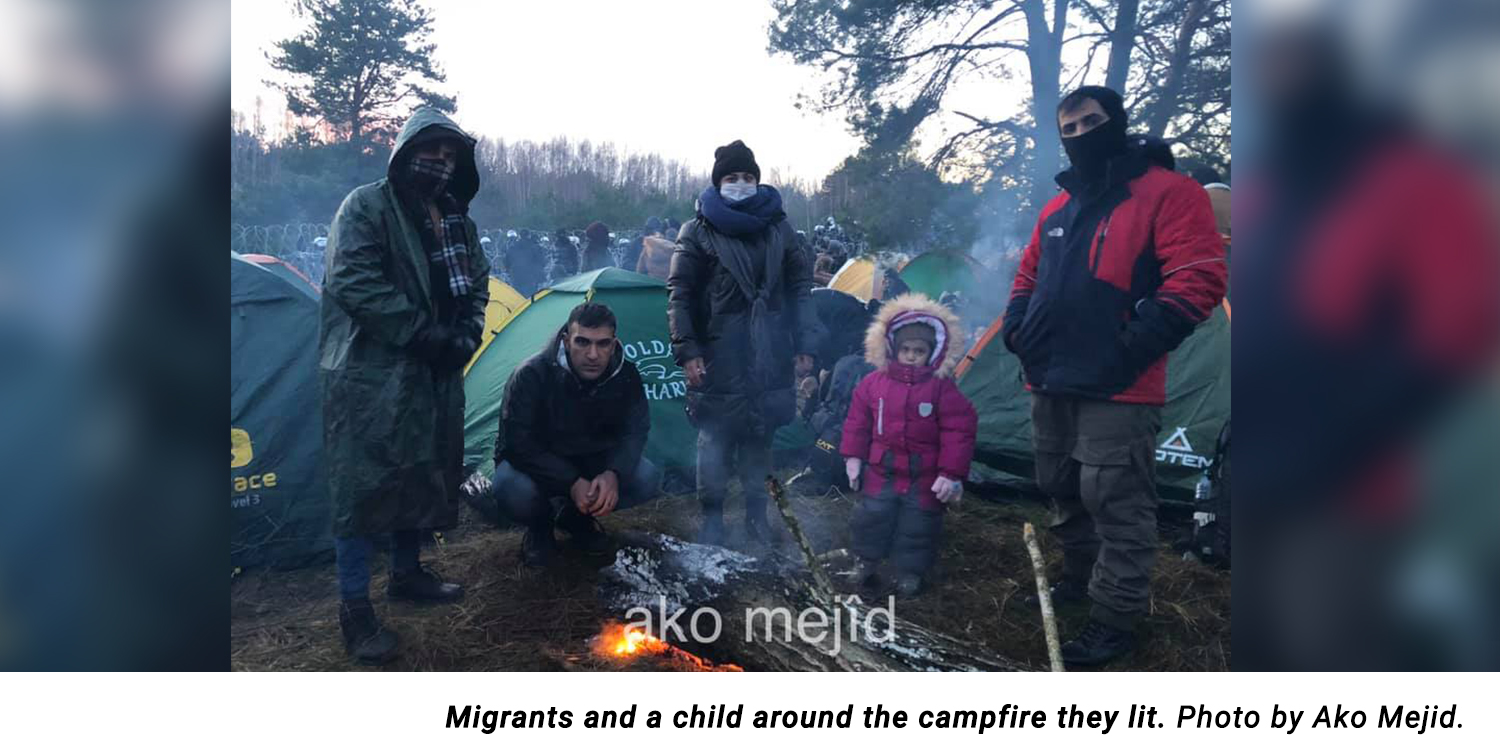 Have there been any refugees wounded trying to cross the border or by attacks from the police? 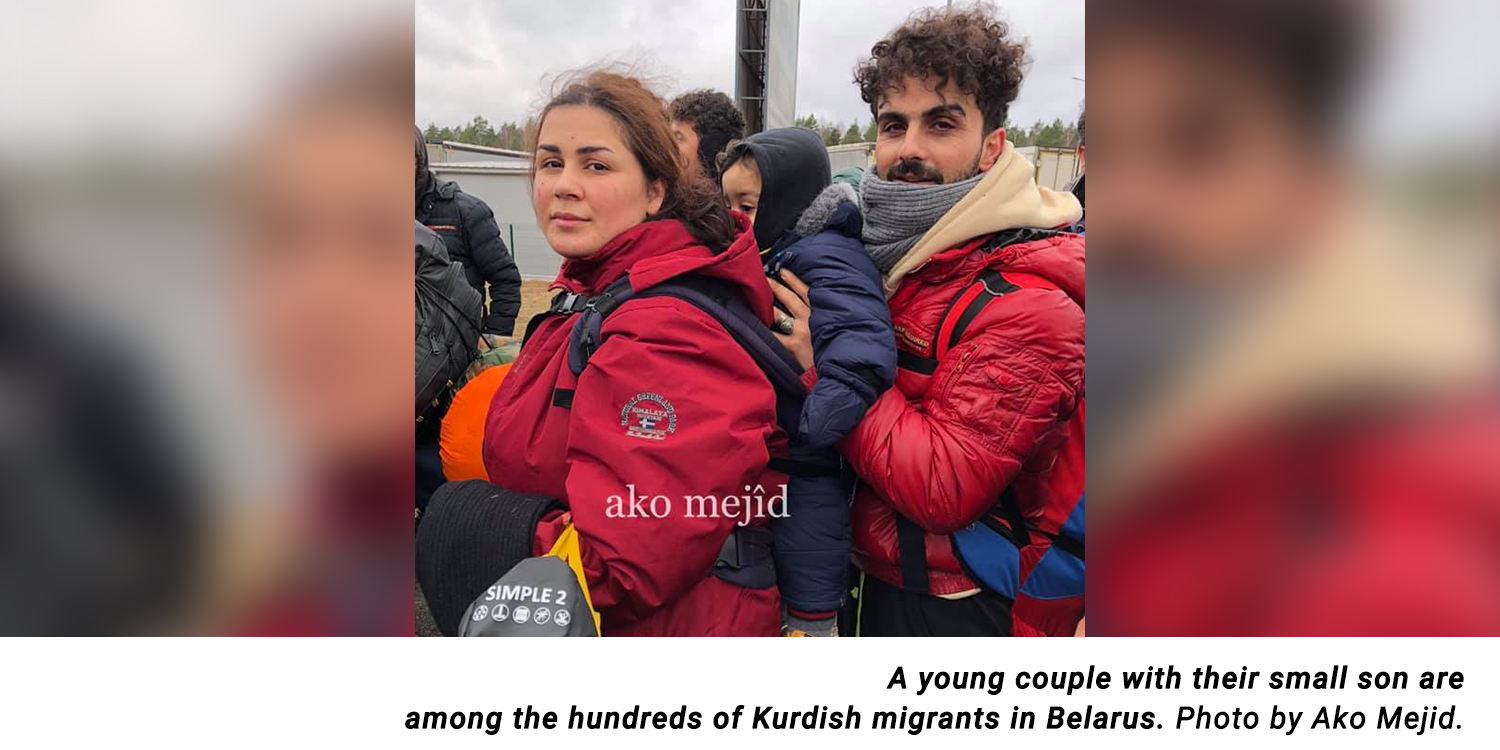 Are the refugees dispersed around the forest, are these thousands of people able to move along together or are there some who have been separated from the main group?

Some of the 2,500 refugees have disappeared. We cannot get news from those who recently left Minsk. We do not know where they are. Belarus police have taken them somewhere else. The whereabouts of around 200 and 400 people remains unknown.
Sometimes we hear gunshots in the forests of Belarus. The Belarus police open fire on the refugees.

What do you think will happen next? Do the refugees think of going back if they are not able to pass the border in the upcoming days?