Is ‘Brussels on the verge of suspending Turkey’s membership negotiations to join the EU?’

This vote arose as a consequence of concerns over extreme human rights violations taking place in Turkey. In the vote which took place, 49 MEP’s voted in favour of the resolution, four against, with 14 abstentions. This vote prompted the New European to report that “Brussels is on the verge of suspending Turkey’s membership negotiations to join the EU over human rights violations. MEP’s on the Foreign Affairs Committee voted overwhelmingly in favour of allowing the European parliament to vote on a formal suspension next month. If passed, this would be the first major shift in EU-Turkish relations since negotiations began in 2005”.

Reuters reports that “EU officials and diplomats now say that Turkey no longer meets the democratic criteria to be considered a candidate, let alone a full member, for the EU. In the Foreign Affairs Committee report, EU lawmakers said the formal suspension of EU membership talks should take place, followed by a review, in order to consider other ways to maintain close ties with Turkey”.

The Foreign Affairs Committee’s report will now go, Reuters confirmed, “to the full plenary next month and, if accepted, becomes the parliament’s official position”. 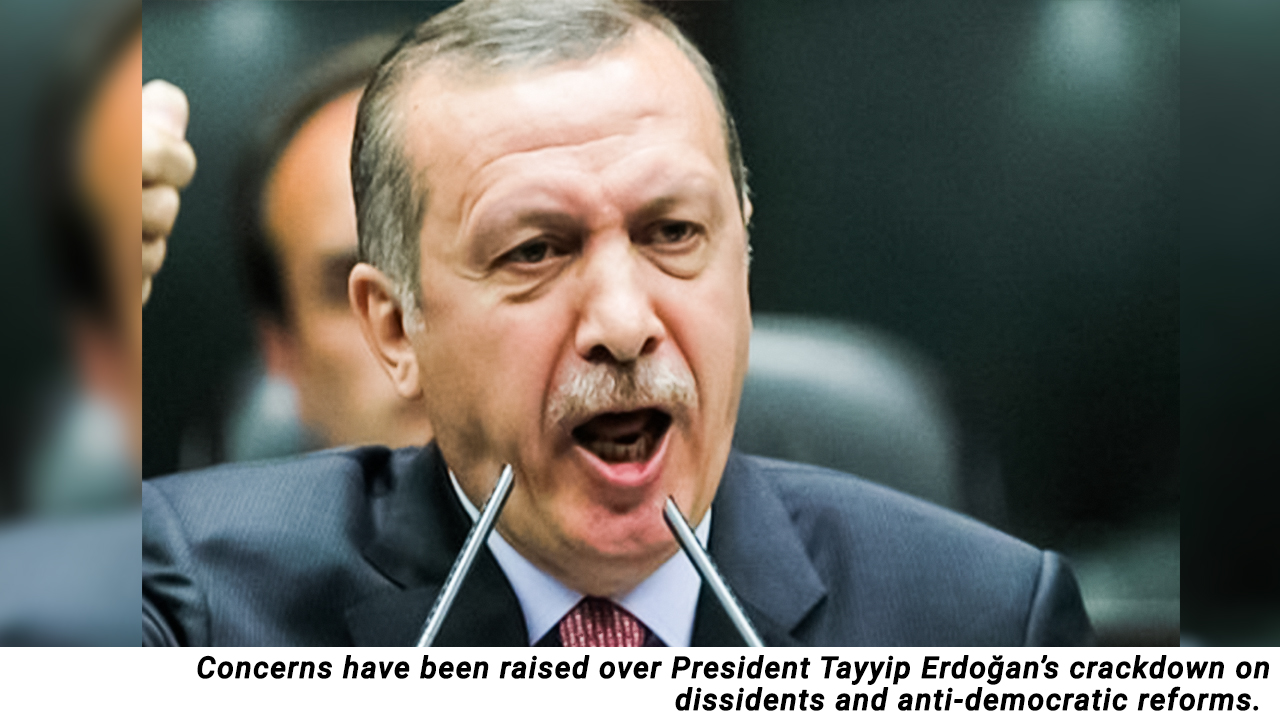 Nacho Sanchez, a centre-left Spanish EU lawmaker who reportedly led the Foreign Affairs Committee parliamentary discussions, has stated that: “This report is probably the toughest ever in its criticism towards the situation in Turkey. It reflects all that has unfortunately happened in the country in the last two years, in particular in the fields of human rights and rule of law”.

The New European added: “EU governments say President Tayyip Erdoğan’s crackdown on dissidents and anti-democratic reforms have taken the country on a path away from the bloc. Turkey’s exploration for oil in contested waters in the eastern Mediterranean has also angered EU leaders. Erdoğan, whose government has launched a diplomatic charm offensive this year to improve ties, has said he will walk away from EU membership talks if there is no progress.

“Last month, MEP’s signed a letter to EU foreign policy chief Josep Borrell calling for ‘tougher sanctions on Turkey’ over human rights violations. It came as EU leaders agreed to suspend the threat of sanctions against the country after a diplomatic drive by Ankara”.

Concerns raised over Turkey’s withdrawal from the Istanbul Convention

The Foreign Affairs Committee’s concerns would also have been heightened as a result of President Erdoğan’s recent decision to withdraw the country from the Istanbul Convention. As the Council of Europe has clarified, its Convention on preventing and combating violence against women and domestic violence “is based on the understanding that violence against women is a form of gender-based violence that is committed against women because they are women.

“It is the obligation of the state to address it fully in all its forms and to take measures to prevent violence against women, protect its victims and prosecute the perpetrators. Failure to do so would make it the responsibility of the state. The convention leaves no doubt: there can be no real equality between women and men if women experience gender-based violence on a large-scale and state agencies and institutions turn a blind eye”. There have been statewide protests in Turkey condemning the Turkish president’s decision.

Concerns raised over the targeting of the HDP

Concerns would also have been raised over Turkey’s state prosecutors’ legal proceedings to close down the pro-Kurdish Peoples’ Democratic Party (HDP), the second-largest opposition grouping in the country’s parliament. The Foreign Affairs Committee would have made its decision and drafted its report with the full knowledge of the ‘Kobani Case’ trial which began this week of 108 HDP politicians, including the jailed former co-chairs Figen Yüksekdağ and Selahattin Demirtaş, who have controversially been accused of all the deaths that occurred during the 6-8 October 2014 Kobani protests in Turkey.

“We’re many following closely from the EP the Kobani trial starting today against 108 individuals, including leading members of HDP (the Peoples’ Democratic Party) & ex co-leaders Selahattin Demirtaş and Figen Yüksekdağ. Criminalising legitimate, democratic opposition is not the way. #SolidarityWithHDP”, Nacho Sánchez Amor, the European Parliament’s Standing Rapporteur for Turkey, had commented on Twitter this week on the opening day of the trial.

Amor is a member of the Group of the Progressive Alliance of Socialists and Democrats (S&D) in the EP. The S&D Group in the European Parliament previously condemned, on 25 September 2020, the crackdown on the HDP, following the initial news concerning the ‘Kobani investigation’, when Ankara prosecutors had decided to detain 82 people in seven provinces under an investigation into the protests of 2014, known as ‘the 6-7 October events’ in Turkey.

“I express my deep concern about this new crackdown campaign against HDP members on alleged involvement in events dating back to 2014″, Amor had stated with regard to the Kobani indictment. He added: “This is simply projecting the de-facto state of emergency towards the past, to a period even previous to the failed coup attempt.

“Turkish authorities seem determined to establish some kind of overall retroactive state of emergency in order to further suppress opposition and any critical voices. Former HDP co-chair Selahattin Demirtaş is also accused of similar involvement in these events and six years later, he is still in prison – against the ruling of the European Court of Human Rights – and even still waiting for an indictment!”

Amor had concluded by stating that: “Detainees include current Mayor of Kars, Ayhan Bilgen, one the very few remaining HDP mayors who hadn’t yet been removed from office by the central government. If he was to be replaced by a trustee, it would be the umpteenth attack against the democratic will of the people, as expressed in the last local elections”.

Socialist MEP Costas Mavrides, interviewed in Parliament Magazine, also stated bluntly why there are concerns that need to be addressed by the EP: “We choose not to be silent against the crimes committed by Erdoğan. We must not follow the failed appeasement policy of the late 1930’s towards Nazi Germany, which humanity paid with such a heavy cost”.