An update by the Christian Peacemakers Teams on the civilian impact of Turkey's military incursions into Iraqi Kurdistan indicates that there are reports suggesting that Turkey used chemical weapons in an attack on farmland which left a family of three wounded.

On 1 October the Christian Peacemaker Teams (CPT) published an update on the impacts of Turkey’s military operation ‘Claw-Lightning’ in Iraqi Kurdistan, with a significant note referring to reports suggesting that chemical weapons or white phosphorus were used by Turkey in an attack targeting farmland on 4 September.

In the recent update, three civilians are reported to have been killed during Turkish attacks in August.

On 13 August 2021, Ibrahem Hassan Mohamad (51) was shot and killed by Turkish military forces while watering his fields in Dishishe village, Kani Masi. The villagers had been forcibly displaced by the Turkish military earlier this year. Ibrahem and 12 other civilians had come back briefly to water their fields. 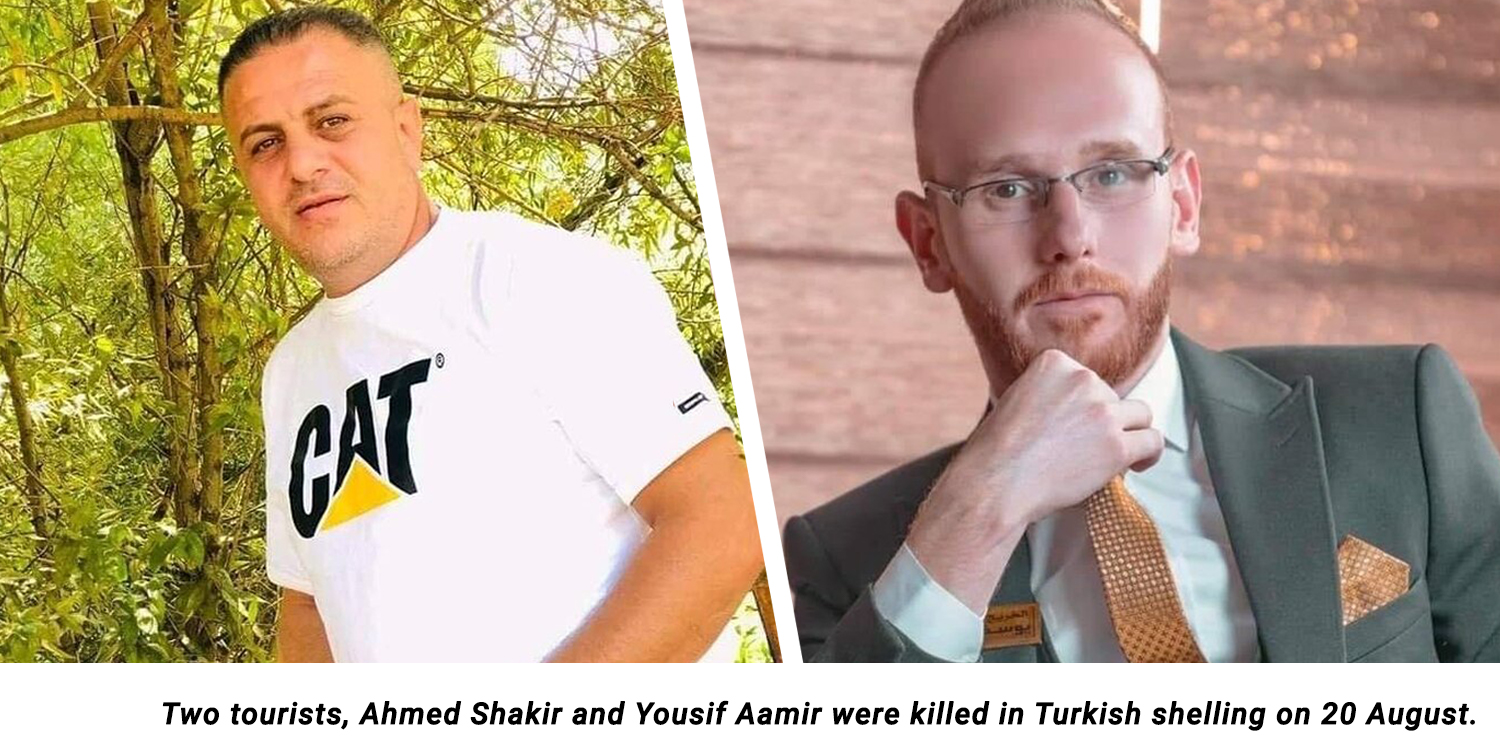 On 20 August 2021, Ahmed Shakir (40) and Yousif Aamir (26), tourists from Mosul, were on a road in the Banke village resort in the Batifa sub-district of Zakho when Turkish military forces started shelling the road with artillery, killing them both.

Probable use of chemical weapons

At 6.30pm on 4 September 2021, Haji Abdullah Hiruri, his wife and their daughter, were farming their land when it was hit by Turkish artillery shelling. Reports suggest that chemical weapons or white phosphorus were used by Turkey in the attack. When the three of them regained consciousness they began vomiting and also found they had severe burns. They were discovered by neighbours and taken to Zakho hospital where they are under treatment.

Fires caused by the Turkish military

Turkish Armed Forces have caused fires which have burnt almost 5,500 acres (22,500 dunams) of farmland in villages in Kani Masi. These fires were started by the Turkish armed forces by bombardments, shooting and with the deliberate use of fire-starting tools.

Villagers reported that fires burning on CPT Iraqi Kurdistan’s visit to the area on 20 June 2021 were started both by bombardments and by Turkish soldiers entering the area at night and deliberately setting fire to areas of farmland.

On 27 July 2021 Turkish soldiers shot firearms directly at the village of Hirure from their new military base. As a result 165 acres (670 dunams) of farmland was burnt.

According to the Mayor of Kani Masi, as of July 28, the economic damage caused by the Turkish military attacks to the farming and pastoral communities of the Kani Masi sub-district has reached six billion Iraqi Dinars (approximately 3 million GBP or 3.5 million euros).

More than 1,500 civilians have fled their homes in the Avashin and Kani Masi regions as a result of the military operation Claw-Lighting.

Two churches have been closed, one in Miska, which was damaged in a bombardment and one in Chalke-Christiana.

One school, one hospital and several mosques have been closed.

Two projects providing essential water to villages in Kani Masi have been destroyed.

At the beginning of the operations a water project in Adne, which provides water to nine villages, was destroyed in a bombardment by Turkish armed forces.

On 17 August 2021, pipes providing water to Baziv village were destroyed in a bombardment when Turkish military forces bombed Hirure, Baziv and Kesta villages.

Karasu on Biden’s letter: US explicitly admits that ‘the Kurds were right’

Karasu on Biden’s letter: US explicitly admits that ‘the Kurds were right’