Iraqi Kurdistan: ‘Turkey has built nearby military bases armed with artillery that now threaten the lives of civilians,’ NGO says

Christian Peacemaker Teams (CPT) promote conflict resolution and represent an international violence-reduction and human rights organisation. They have been monitoring the civilian impact of Turkey’s recent military cross-border operation in Iraqi Kurdistan, dubbed ‘Operation Claw-Lightning.’ A CPT representative spoke to Zelal Fidan from Mesopotamia News Agency (MA) and described the nature of the Turkish incursions across the region over the past six years and the findings from their latest report.

The report by CPT, an international organisation that was founded in 1987 in Chicago and registered in the United States as a faith-based non-profit and in Iraqi Kurdistan as an international non-governmental organisation (NGO), indicates that “while Turkey claims to target the Kurdistan Workers’ Party (PKK) in Operation Claw-Lightning, the reality is that civilians living in the border regions are most critically impacted by Turkey’s bombings.”

“These bombardments have devastated the region where hundreds of families live. Thousands of dunams [where one dunam represents roughly 900 square metres] of land and approximately 1,300 beehives have been destroyed, all of which are crucial resources for families,” the report concludes.

“Turkey’s bombings not only threaten the livelihood of families, but also their lives. Four civilians have so far been injured by Turkey’s bombardments, and more than 1,500 civilians from 22 villages have evacuated their villages to escape Turkey’s assault,” it noted, whilst adding: “CPT fears that these families may never have the ability to return to their homes, as Turkey has built nearby military bases armed with artillery that now threaten the lives of civilians.”

Kamaran Osman from CPT’s Sulaymaniyah (Silêmanî) Office spoke to MA. He stated that Turkey’s president Recep Tayyip Erdoğan has now come to view Erbil (Hewler), the capital of the Kurdistan Region of Iraq, as Turkish territory, after six years of continuous warfare in the region that has resulted in at least 116 civilian deaths, the evacuation of 148 villages, the displacement of thousands. To add to this, 42 military bases have been constructed which deploy 80 armed and surveillance drones in the region.

Asked if the governing Kurdistan Democratic Party (KDP) provided aid for the displaced people and worked to facilitate their return to their villages, Kamaran Osman replied that it did not: “The KDP has very close relations with Turkey. Thet have an oil agreement spanning 50 years. When they’re asked why they do take any action, they say it falls under the responsibility of the Iraqi government to guard the country’s sovereignty, whereas it’s a collective responsibility shared by the Kurdistan Regional Government according to the constitution. 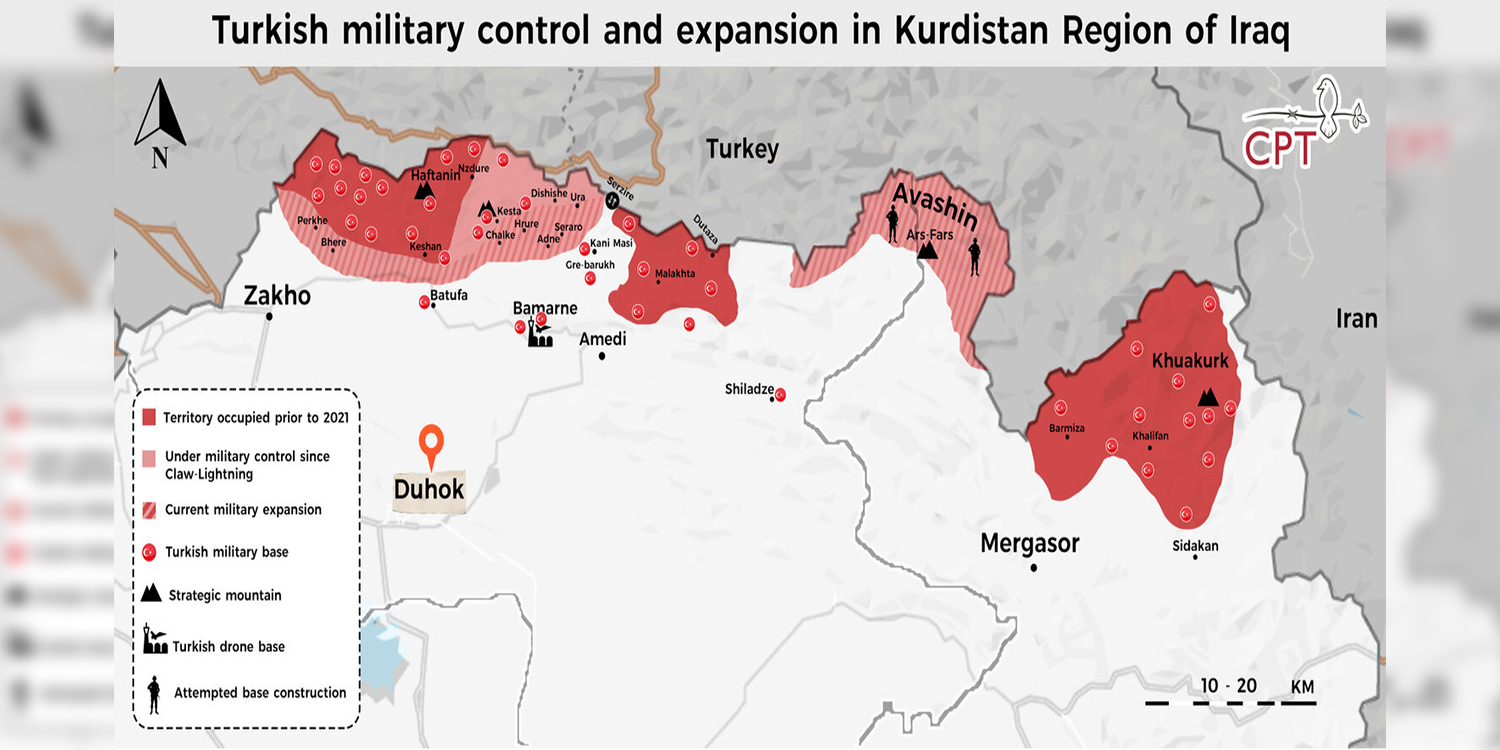 Asked about the area currently under the control of Turkish forces, Osman replied: “They’ve set up bases 35 km inside the border in the Sidekan district. It varies from one region to another. They’ve occupied an area of 15-20 kilometres in depth in the Haftanin region.

“They haven’t targeted the guerrillas of the PKK as they claimed. There are no PKK forces in that region. These are just the fields of the villagers. They’ve hit these fields. They hit a house. There was also a place of worship in the vicinity. It got hit too. The target of this war is clearly not only the PKK,” he concluded.

Asked what he thought was the true objective of Turkey’s bombing of that area, he replied: “Our observation on the field is that Turkey has been looking for an opportunity to invade Iraqi Kurdistan. Actually, you can see in the statements of the Turkish president Recep Tayyip Erdoğan that this objective is not being concealed. He sees Erbil as his own territory; a territory within the borders of Turkey.”