Hasankeyf submerged by a Turkish dam – Part 2: Bio-politics as an ‘ecological war tool’

Medya News continues with its series of interviews with people in Hasankeyf in the south-eastern province of Batman (Êlih) in Turkey. Hasankeyf, an ancient town, was engulfed in 2019 by the reservoir of a controversial hydroelectric dam project.

The filling of the reservoir of the dam not only caused 12,000 years of continuous human life in this ancient Mesopotamian town to be interrupted, but also deeply affected the biodiversity of the Tigris valley.

After the reservoir of the Ilısu Dam was filled, not only 85% of the historical artefacts and sites of Hasankeyf was destroyed, but “the ecosystem was terribly damaged. All the living creatures and the flora lost their habitats. The endemic species and many bird species vanished off the face of Hasankeyf. The level of moisture increased, had a negative impact on both the animals nested in Hasankeyf and the humans, especially the elderly. We cannot breathe healthily now”, said Rıdvan Ayhan, a devoted activist and the spokesperson of the Initiative to Keep Hasankeyf Alive, which was formed by locals and volunteers in 2006.

Looking down at the artificial lake from a vantage point at the top of a hill on the road to Hasankeyf, where the village ‘Shikefta’ (Şıkefta) – a residential area – vanished under water, Ayhan said: “In that place you see, under the water there, there were the caves and homes of the former residents. Due to the Ilısu Dam, the residents of these caves were displaced. They had their vineyards, orchards, gardens and animals, but they lost them all due to the Ilısu dam. No animal is able to live here now, because there is no pasture left to feed the animals. Therefore, all the villagers had to migrate”. 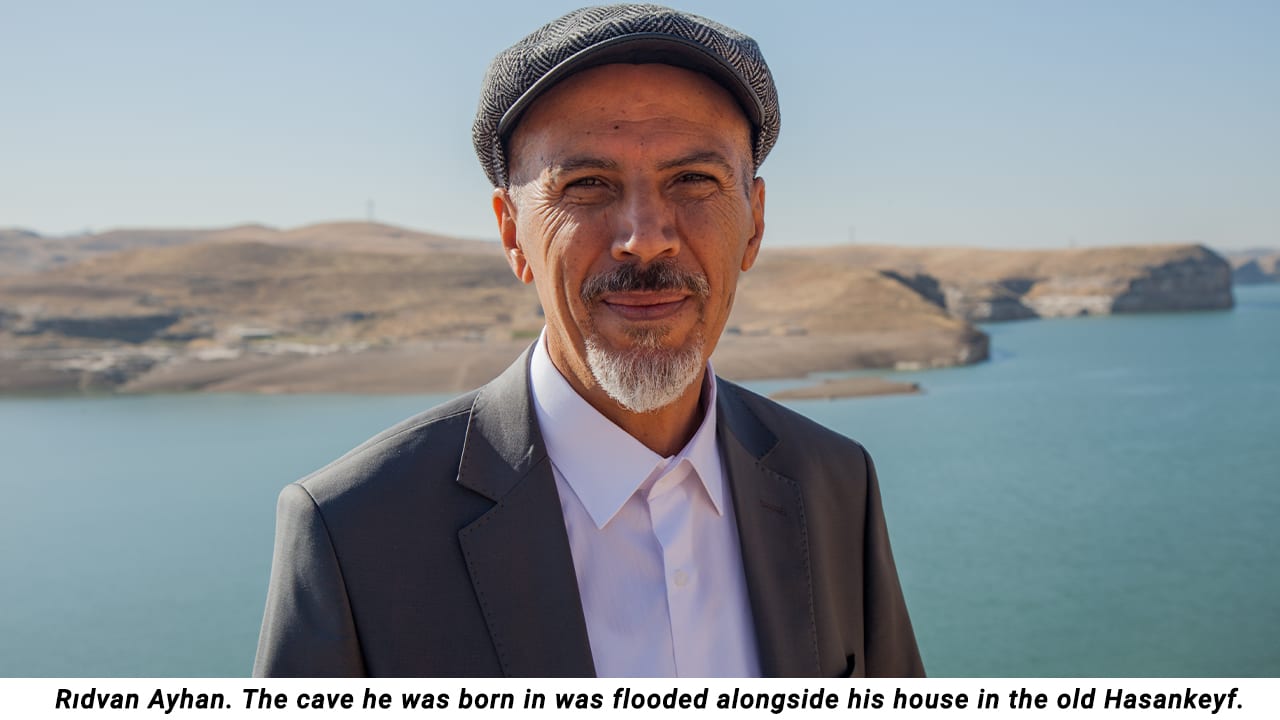 After years of struggle to protect Hasankeyf, Ayhan was sentenced to a prison term of over a year due to his struggle to halt the dam project. The cave he was born in was engulfed as well as his house in Hasankeyf. ‘What is next for Hasankeyf, is the struggle over?’, he was asked. His reply: “Never. The eco-system of Hasankeyf still needs protection and there is still a lot to do to save it. Our caves were our sweet homes and no apartment they build can be a home to me now. Our struggle shall and will continue until the reliction of the dam water is assured”.

As animals get sick, ‘we live in drought conditions, encircled by water’

“It was all green at the waterfront of old Hasankeyf. We had small lakes and trees and bushes: all of these were natural resources to feed our animals. Whilst there were around 100,000 hectares (247,105 acres) of green-fields in the old Hasankeyf, they say there are 500,000 hectares of green-fields now, but there are none. They have only planted 14,000 trees, but these trees can only grow in a few years”, said Eyüp Ağalday, a 27-year-old who is now the last goatherd living in Hasankeyf. 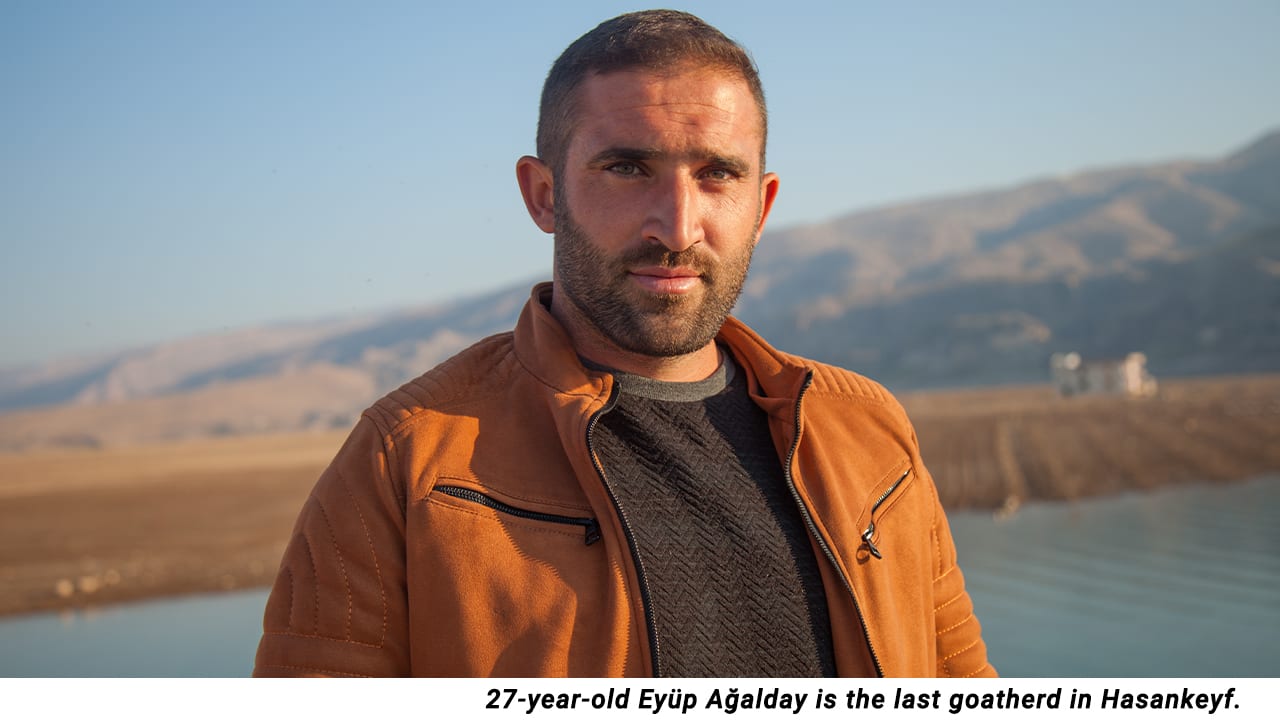 Ağalday has been actively supporting the cause to protect Hasankeyf for years as he has been the direct witness of the environmental impacts of the dam. “We live in drought conditions, encircled by water”, he said, whilst describing the harm to the aquatic ecosystem that has been caused by the high tides and low tides of the dam, which the fish as well as the herds of Hasankeyf’s shepherds have suffered from.

“As Hasankeyf began to become more flooded under the rising waters of the dam, especially after the summer of 2020, our animals began to get sick. The animals are afraid to drink the waters of the dam. Since the water has flooded areas, many marshes have been created. The cattle of our neighbours have got trapped in the marshes. It has been so hard to take them to safety sometimes. The water of the dam is everywhere, but we do not even have fish. Fish die due to the tidal flows of the dam’s waters. The water will rise up and then go down, there will be marshes and droughts. We may sell our animals, because our animals are really in such a poor condition now”.

Most of the cultivated areas, the wheat fields and the cornfields are engulfed, Ağalday observes. “The gardens and the trees dried up. They said they would turn the fields into wetlands, but when the fields came out to the surface after they were engulfed, they all turned into marshlands. Only a few families are left now, who still do farming like us”.

Özdemir refers to the data of a field study that was conducted by the researchers of Dicle University to highlight how the Ilısu dam causes ecological destruction in the region. “The Tigris valley has been home to 266 endemic species. 66 of those 266 endemic species were living in the areas directly facing the impacts of the Ilısu Dam. 311 square km of the habitat of all living creatures were submerged. The state disregarded such field studies, which many researchers and civil activists were involved in to protect the Tigris valley. There was no Environmental Impact Assessment (EIA) report when the Ilısu Dam project was first launched”, he said. 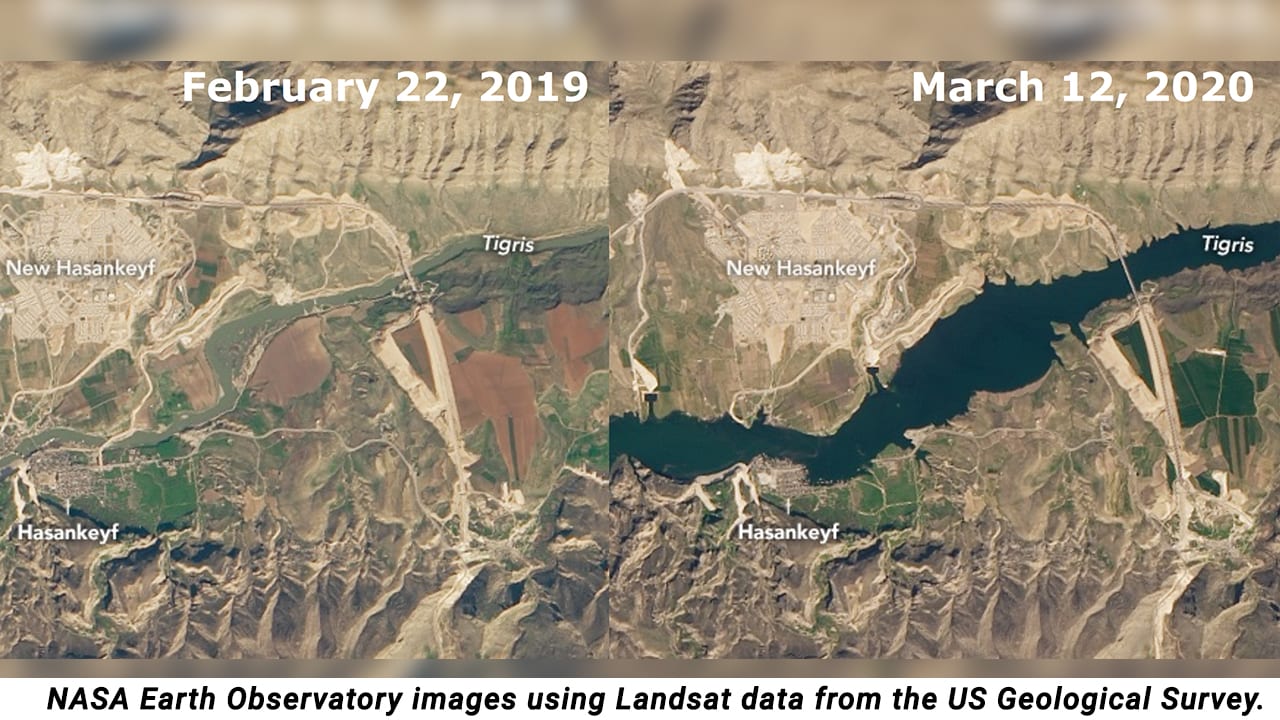 As an ecological activist in the the struggle to save the Tigris valley and Hasankeyf, he describes what he sees and experiences as a multi-layered struggle which is centred on an ecological struggle that has organised and enlarged itself into a collective struggle against the dam. “The ecology of the Tigris valley is not limited to the flora and fauna: all natural, biological, historical and cultural assets form the ecology of the valley. The state mobilises all bio-political power to interrupt all organic-natural-historical life in the region. Within this perspective, we have reasons to consider the Ilısu dam as an ‘ecological war tool’. Official documents of some state institutions address the Ilısu dam as a ‘security dam’. What we understand from their concept of ‘security’ is forcing the inhabitants of the villages to migrate, which had been burned down and depopulated during the 1990’s. Only this time, via ‘manufacturing consent’, a more refined and vague way to force people to leave is undertaken”.

Forced migration must be seen as part of the ecological question

Özdemir noted that the Ilısu dam engulfed not only Hasankeyf, but in total 199 rural settlements, all of which constitute an integral part of the ecology of the Tigris valley. “We should take into consideration the sociological and psychological connotations of the ecological destruction. Around 90 of these villages had faced forced displacement when they were burned down and evacuated in the 1990’s. The hope of return has been destroyed for thousands of people who had been displaced and forced to migrate to the cities. When we take the concept of ecology, we cannot disregard this phenomenon, because we consider the social dimension of the environmental destruction within a dialectic that relates to the ecological question”, he said. 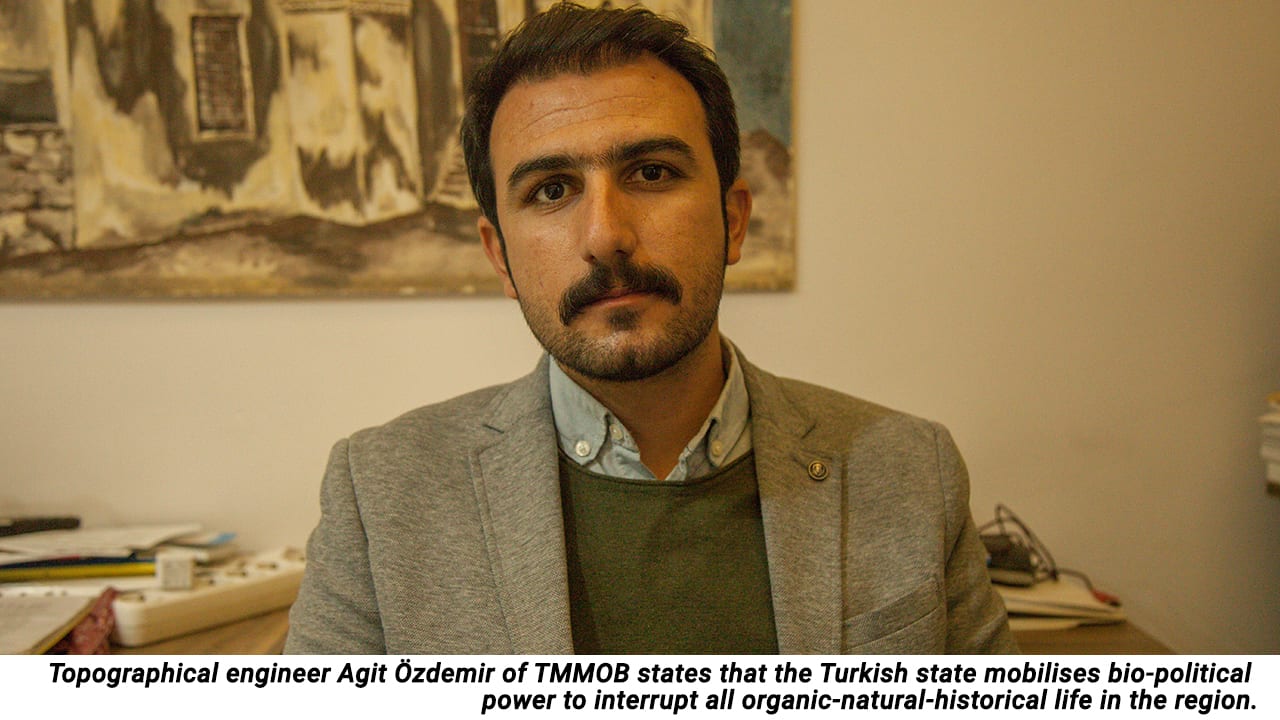 “After the activation of the Ilısu dam in July 2019, up to 100,000 people were forced to migrate, including around 3,000 nomadic families (known as “Koçers”, who are a special nomadic minority to be protected). They lost their natural living areas that are necessary to continue their subsistence economy – a unique economic model outside the system”, he noted. “They lived in a non-capitalist, non-industrial environment.
They terminated the organic life of these villagers who survived on agricultural production and lived in harmony with nature, planting their own vegetables in their own gardens and farms. These villagers were forced to migrate to the big cities to be the prospective cheap work force”.

The struggle in Hasankeyf should not be considered as a lost cause, according to TMMOB’s Özdemir. “The ecological activists in Kurdistan and around the world have gained an important experience in Hasankeyf. In Hasankeyf, what they actually wanted was to engulf the truth, to bury the truth underwater. So, our ecological struggle is a part of our quest for the truth, which will continue”, he said.