Freedom Ship: From Gramsci to Öcalan, socialism cannot be imprisoned!

On 8 November, a ship called the Freedom Ship sailed from Greece towards Italy in the waters of the Mediterranean. The passengers of the ship were activists from many countries and leading figures in their communities, striving to raise international solidarity with the Kurdish people. More than 40 people, from different backgrounds including journalists, academics, politicians, writers, artists, feminists, and peace advocates from Germany, France, Switzerland, Brazil, Spain, Sweden, Italy, Greece and the UK, presented a brilliant example of solidarity amidst the turbulence of the times we live in. On behalf of Abdullah Öcalan, the leader of the Kurdish people, and hundreds of thousands of political prisoners in Turkey, revolutionaries from all around the world gave voice to the demands of the Kurdish people to be able to live freely and to have a status officially recognised by the UN and other nations around the world. 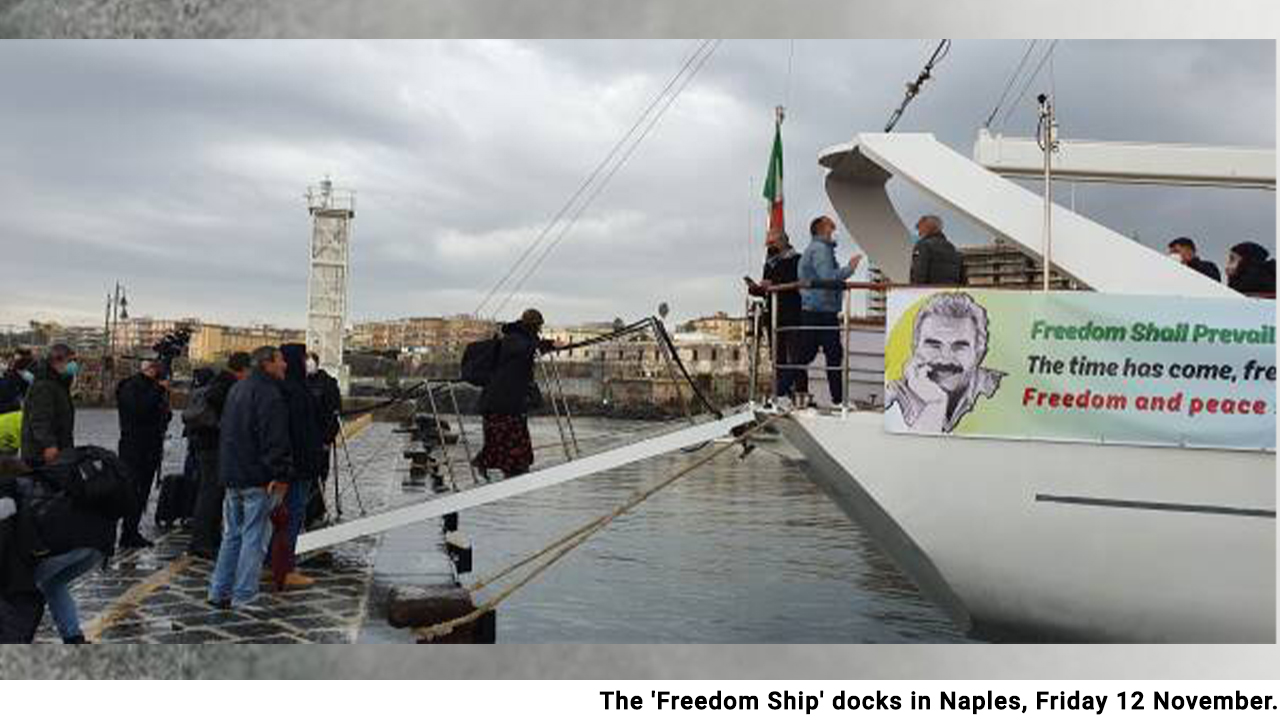 The date and the route of this emblematic cruise from Greece to Italy was not chosen arbitrarily. Greece was the first European country that Öcalan arrived in to seek political asylum in November 1998 after he was forced to leave Syria and Lebanon. Following rejection by Greece, Italy was the next European country Öcalan went to. He spent around two months going through the asylum application process in Italy, with a massive campaign organised in his support. This period marked the era of an astonishing international and diplomatic crisis between the EU and Turkey. Öcalan was eventually forced to leave Italy as a result of a catastrophic violation of human rights and international law. The period is still recalled by many Italian human rights defenders as a period of great shame in Italy’s history.

The whole world is aware of what happened next; Öcalan was captured by a process that was to all intents and purposes an international conspiracy conducted by a joint operation of the CIA, MOSSAD and MIT (Turkey’s National Intelligence Organisation), that resulted in Öcalan being taken as a political hostage to a prison on the island of İmralı in Turkey. Ever since, for almost 23 years, Öcalan has been imprisoned in conditions of severe isolation.

What makes the insufferable captivity and consequent resistance in a solitary confinement cell in an island prison so unique and important to us is not only Öcalan’s presentation of a surreal endurance to the worst conditions of imprisonment on Imralı, but also his thoughts, conveyed to us via a series of brilliant prison writings that he has authored in prison, reminiscent of the Italian Marxist Antonio Gramsci. He was able to send out his last pieces of writing from the prison through his case at the European Court of Human Rights (ECtHR) in 2010. 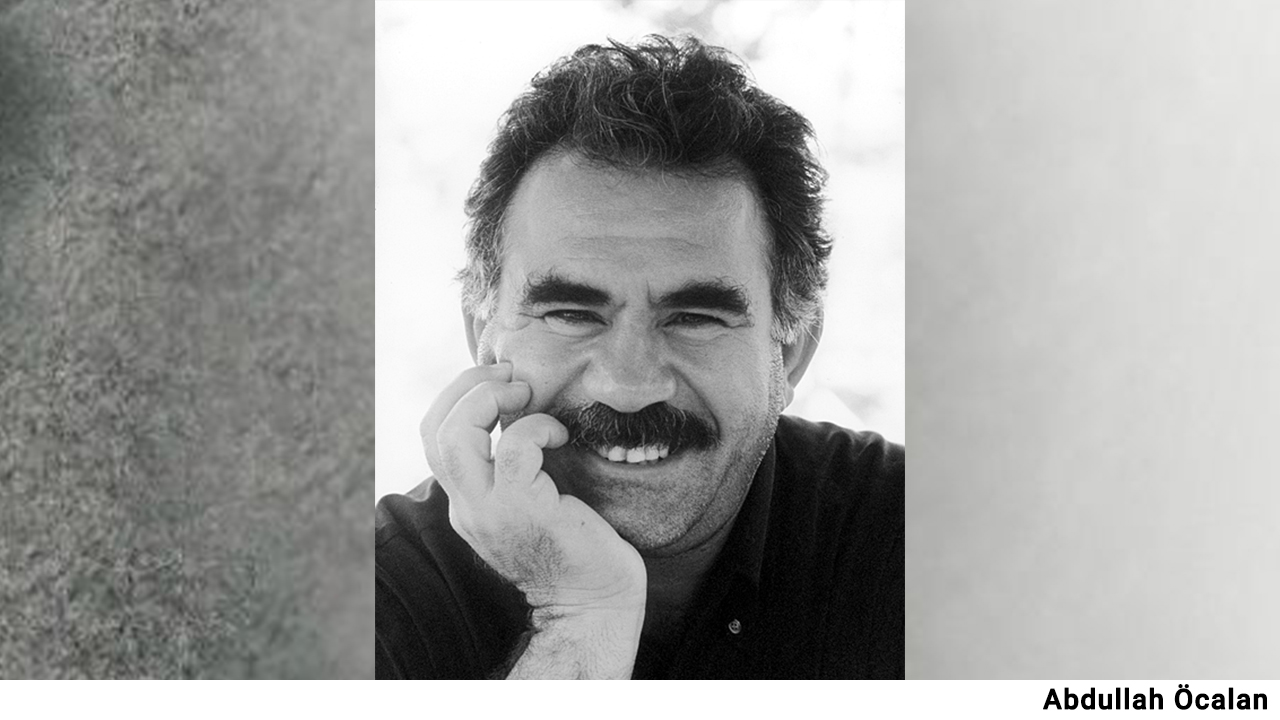 In this five-volume series of writings sent to the ECtHR, Öcalan, in exercising the right to defend himself, has also taken the opportunity to reach out to the peoples of the world through his defence texts. In these writings, he presents his world view and explains his suggested paradigm change. The entire corpus of his collected works already includes a great number of books he authored during the years he was leading the Kurdistan Workers’ Party, the PKK, from the 1970s until 1999, when he was imprisoned. Öcalan has not allowed prison conditions to destroy his political identity and his enthusiasm to continue with his intellectual output as a thinker. Thus, throughout his years in prison he has managed to author books suggesting a brand new paradigm that could be applied in the Middle East in particular, and around the world in general.

Öcalan analyses the principles of political and moral sociality dating back to the dawn of humanity as we know it. With his doctrine of a “Democratic, Ecological, Women-Libertarian, Communal Society” he presents an alternative system to the capitalist organisation of societies. Öcalan’s ontology and his avant-garde critique on positivism and on the linear progressive view of history resulted in building a new political and social theory powered by the perspectives of “democratic nation” and “confederalism”; a theory that offers a new form of society, where an ethical community life is possible; where people can live by basic principles of freedom and collectivism without sacrificing their particularities, their identities, their own being. 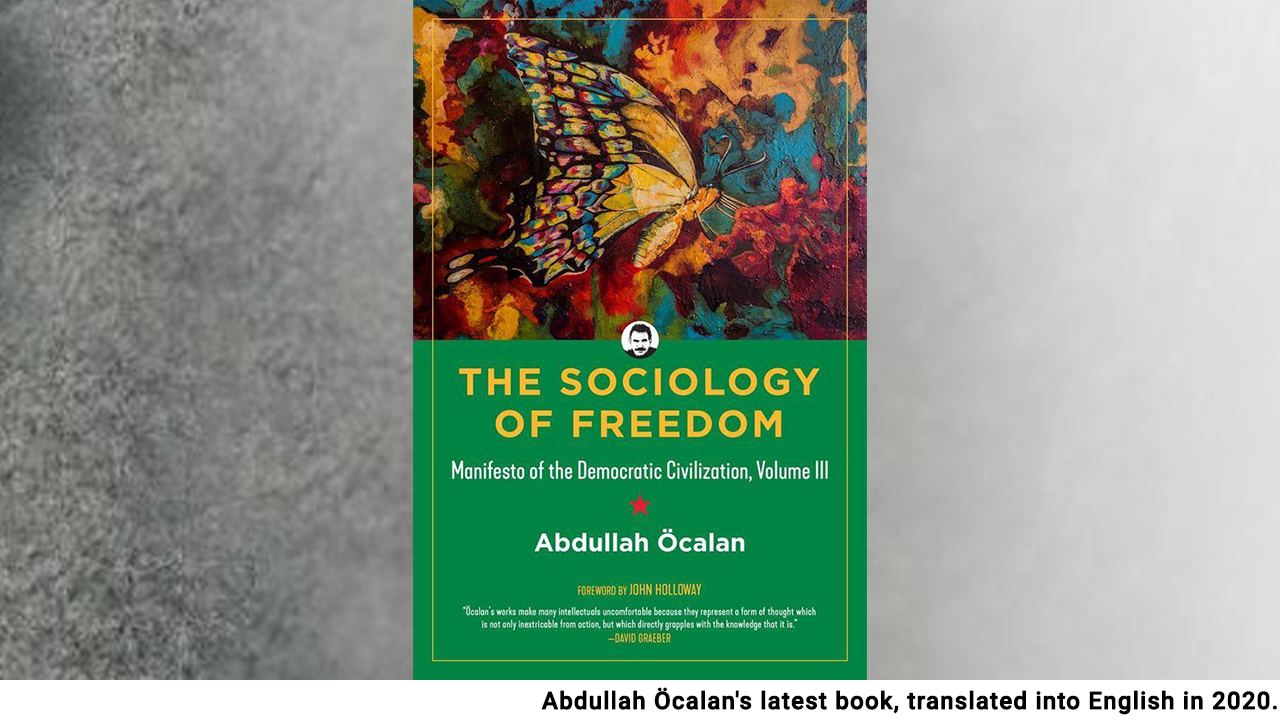 Furthermore, Öcalan makes a radical breakthrough in his handling of patriarchy and class, rejecting hierarchies based on power clusters. He shakes this paradigm, that has been encoded almost as a rule in the linear view of history and in religious eschatology, and that has always been preached by masters of socialist thought as a historico-social necessity. While the linear-progressive view of history suggested that forms of society had to evolve in a certain direction from primitive communal society, through the slave-feudal and capitalist stages to be finalised in the form of a socialist and later on a communist society, Öcalan shows that, on the contrary, capitalism infects us as a virus and a pathology, and need not be considered as a stage that humanity has to go through. Giving numerous examples from history, he shows that it is possible to mobilise efforts to build alternative communes and liberated zones via direct democracy based on communal assemblies. He also addresses women’s liberation and anti-gerontocracy as being inclusively authentic to human nature rather than being a fake instance of social engineering, an example of which was practised in the socialism of the Union of Soviet Socialist Republics, that he also criticises.

Going back to my main topic, I must note that Öcalan is held as “hostage” by the Turkish state and the decision-makers of the existing world. Although he is defined as a prisoner, sentenced to “aggravated life sentence”, his rights as a prisoner, such as communicating with the outside world and with other inmates, have always been violated.

Between 2013 and 2015, he was the leading actor of a process known as the “peace process”, which was, for the first time in Turkey’s history, a process full of promise in terms of democratisation in Turkey. This process for a peaceful resolution of the Kurdish question was terminated, despite all of Öcalan’s efforts, by the Erdoğan regime.

Living in absolute isolation since March 2015, Öcalan has been able to communicate with the outside world only a few times, and these thanks to massive resistance actions, hunger strikes and public campaigns in Turkey, Kurdistan and Europe. The peace process was terminated by Erdoğan’s authoritarian regime and its supporters. And since then, the Turkish state has been intent on taking revenge on Öcalan, by means of this incommunicado prison sentence, which violates all national and universal laws. 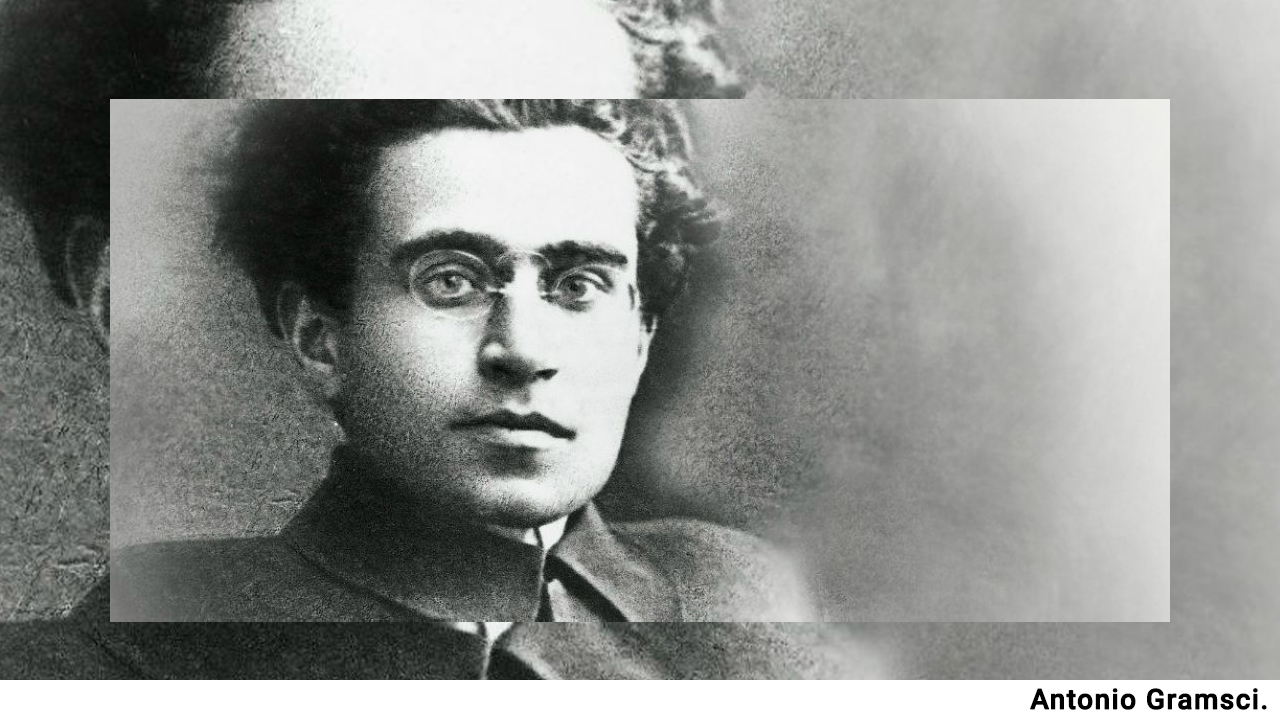 The Freedom Ship docked in Naples in Italy on Friday, coinciding with the celebration of the 50th year of the English translation of Marxist writer Antonio Gramsci’s famous ‘Prison Notebooks’. Gramsci’s “Prison Writings” deserves to be recalled and celebrated as it is a significant example with which to compare Öcalan’s work and his importance in the evaulation of socialist theory.

The life of the Marxist thinker Gramsci (1891-1937), also a founder and long-term leader of the Italian Communist Party, and his imprisonment by Mussolini as a result of a conspiracy similar to the one that led to Öcalan’s arrest, has many similarities with the story of the life of Öcalan. During his imprisonment, Gramsci too became one of the chief theoretical leaders of his era, although his intellectual and philosophical creativity was unfortunately only noticed by the world audience after the publication of an English translation of “Selections from the Prison Notebooks” in 1971, 34 years after he passed away. 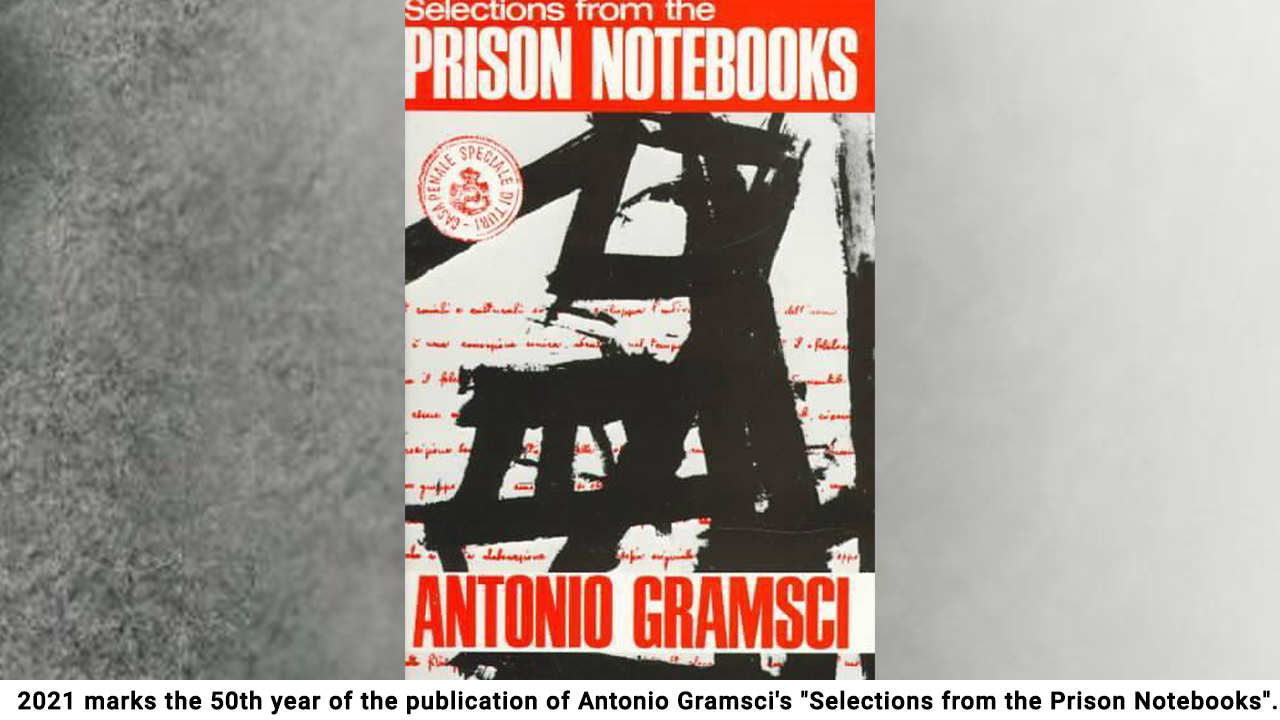 In order to foil the conspiracy, he concentrated his research on classical socialism’s view of class and power relations. With a sophisticated analysis of social power, Gramsci was able to introduce a new approach to address missing aspects of classical socialism.

With the new perspectives he offered in analysing hegemony, civil society, base and superstructure, and the function of intellectuals in society nad much more, Gramsci made highly influential theoretical contributions to Marxist literature, forming the foundations of Western Marxism.

The struggle for socialism continues with enthusiasm and resistance, from Antonio Gramsci, who introduced us to the philosophy of praxis and critical pedagogy, to Abdullah Öcalan, who has become a globalised figure following the realisation of his paradigm in Rojava (West Kurdistan) in northeast Syria, after the Arab Spring in 2011.

The ‘praxis’ in Kurdistan, namely the Rojava Revolution in Syria, which was born after a deadly battle against ISIS and a historical resistance against Turkish colonialism, has inspired social and political movements around the world. The guerrilla resistance in South Kurdistan (Iraqi Kurdistan) and in Iran is also the living example of praxis for the peoples of the world. In the meantime, the Peoples’ Democratic Party (HDP) led the “third way” in Turkey’s politics, and the grassroots opposition organised around the HDP continues to be another source of inspiration for socialist and democratic movements around the world.

The more the authoritarianism and fascism of Erdoğan regime increases, the louder the voices for Öcalan’s freedom will be raised. With the wisdom of the new paradigm spreading throughout the world, as new liberated zones like Rojava are established by the hands of the oppressed, it will become clearer and clearer to the peoples of the world that there is a way out of capitalism.