Key human rights organisations in Turkey are among the applicants asking the Committee of Ministers to monitor the decision of aggravated life imprisonment for Abdullah Öcalan and three other prisoners in Turkey.

Turkey’s Human Rights Association (IHD) and the Human Rights Foundation of Turkey (TIHV) – alongside the lawyers’ associations Lawyers for Freedom (OHD) and the Society and Legal Research Foundation (TOHAV) – have applied to the Committee of Ministers of the Council of Europe for a review of the “aggravated life imprisonment” sentence that the Kurdistan Workers’ Party (PKK) leader Abdullah Öcalan and three other political prisoners, Hayati Kaytan, Emin Gurban and Civan Boltan were given, MA reported.

Article 3, the prohibition on torture and inhuman treatment, along with Article 2, the right to life, is one of the most fundamental rights protected by the ECHR.

The NGOs have demanded that the Committee take up this issue as an item on their agenda to be discussed during their weekly and periodic meetings.

Medya News spoke to Mahmut Şakar, who has been a legal representative of Abdullah Öcalan for several years, to obtain further information regarding this application to the Committee of Ministers. 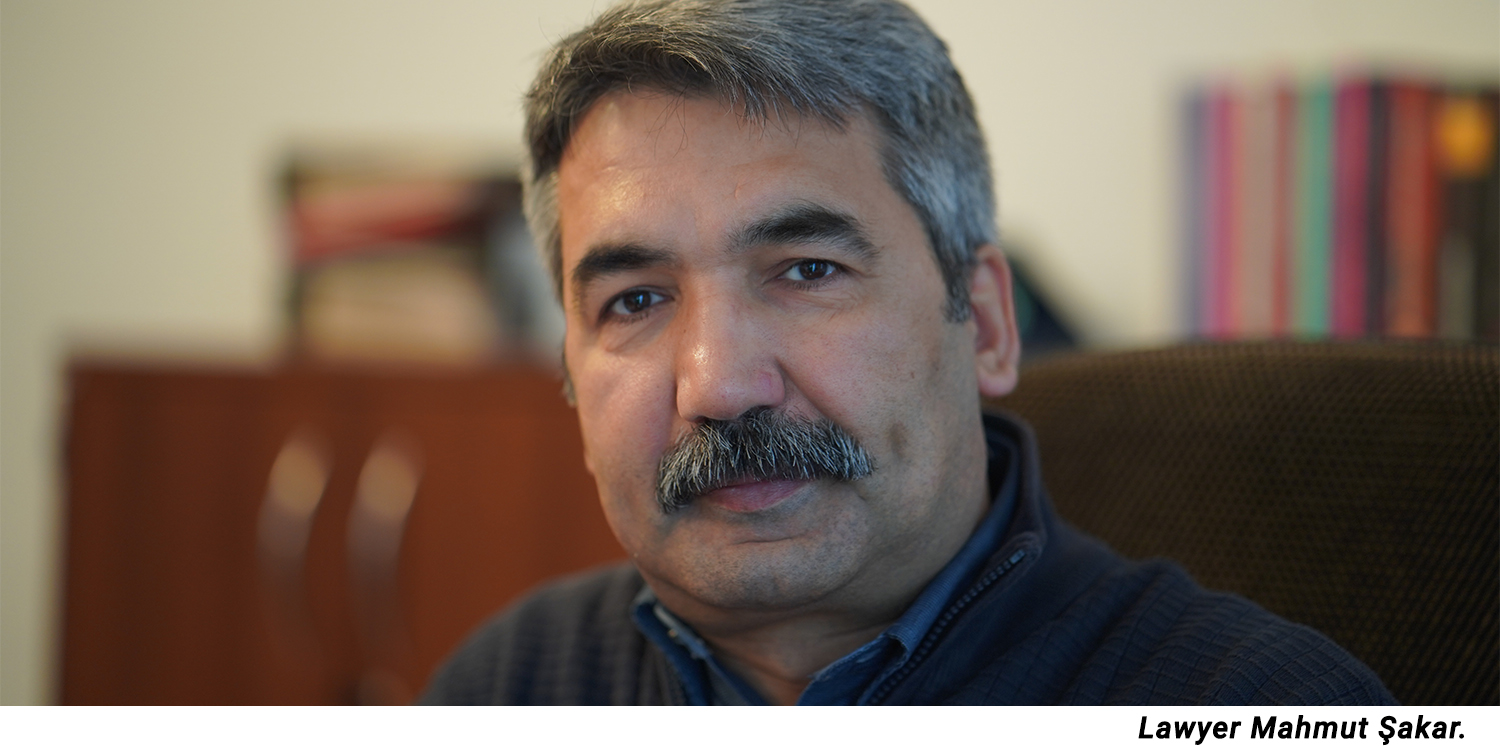 Şakar stated that the grounds of this application date back to the decision of the ECHR in a ruling on 18 March 2014.

“This file was prepared when four separate applications which had been made previously were combined in one. In that decision, the ECHR ruled that there was a violation of Article 3 of the Convention regarding the life imprisonment of Mr. Öcalan without any possibility of conditional release,” he said.

He stated that, again, in the same ECHR decision, there was a decision regarding the violation of the “ban on torture.”

“With regard to another application amid the four applications in this file, the ECHR ruled that Mr. Öcalan’s imprisonment until 17 November 2009 was a violation of Article 3 of the Convention that is related to the ban of torture.”

Şakar noted with concern that, despite the ruling on the four separate applications of Öcalan, Kaytan, Gurban and Boltan which were seen by the ECHR as a single case file, international bodies have failed to take active steps for years to monitor and review the aggravated life imprisonment sentence given to the four applicants.

“It is understood that the aggravated life imprisonment decisions for Öcalan, Kaytan, Gurban and Boltan that were given with no chance of conditional release have not been taken to the agenda of the Committee of Ministers. The legislative efforts for the aggravated life imprisonment sentences to be lifted have not been given a response by the government and the requests filed by various political parties are not taken into consideration,” the four NGOs stated.

The organisations also addressed the four principles of the ECHR relating to the reducibility of the sentence, legally and practically. They stated that these key principles which might have been legal grounds to review the sentence given to Öcalan and the three other prisoners do not have any correspondance in Turkish laws.

“Conditional release should be, as a rule, made possible in Turkish law for all prisoners, without distinction of any kind, in accordance with the principles stated in the decision of the ECHR,” the NGOs noted.

The four NGOs also demanded that the Committee reviews the aggravated life imprisonment sentences given to the PKK leader and the three other prisoners. They stated: “The right to hope obliges a mechanism to review the sentence.”

“Following the procedure followed in the Laszlo Magyar v. Hungary process, we demand that the Committee requests statistical information from the Turkish Government for the entire case group regarding the number of people sentenced to life sentences, the years in which these sentences were finalised and the duration during which the prisoners sentenced to aggravated life imprisonment have been serving in prison,” the NGOs said.

The Committee of Ministers was invited to take this application as an item in their agenda to be discussed in biliteral diplomatic talks. 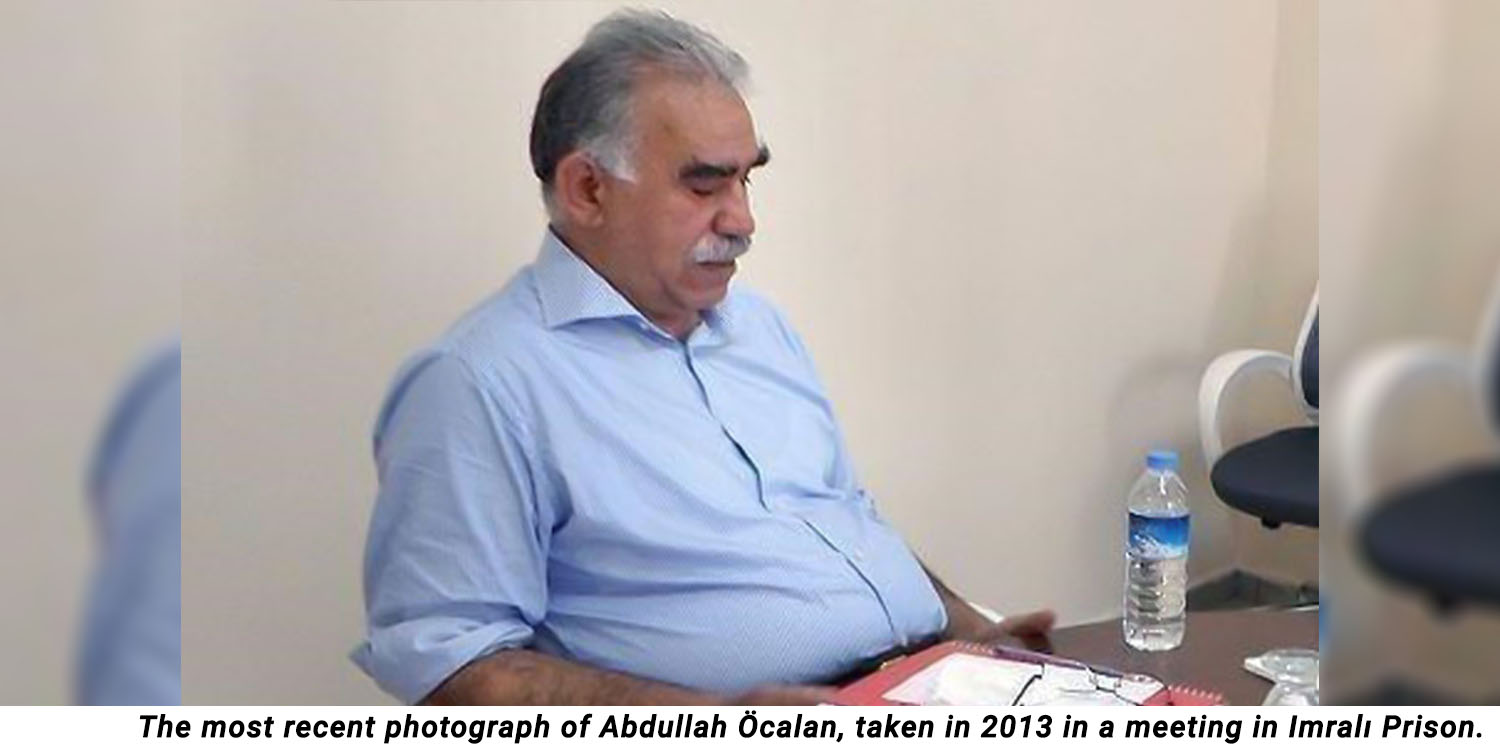 Öcalan was arrested by Turkish security forces in an aircraft in the international area of Nairobi airport. He was returned to Turkey from Kenya and taken into custody at İmralı Prison on 16 February 1999. The inmates at this prison had, meanwhile, been transferred to other prisons.

By a judgment of 29 June 1999, the Ankara National Security Court (MGK) sentenced Öcalan to death for being the founder and the leader of the PKK. The court did not accept that there were mitigating circumstances allowing the death penalty to be commuted to life imprisonment.

By Law no. 4771, published on 9 August 2002, the Turkish Grand National Assembly resolved to abolish the death penalty in peacetime. As a result of the amendments, a prisoner whose death sentence for an act of terrorism has been commuted to life imprisonment must spend the rest of his/her life in prison.

Following these developments, by a judgment on 3 October 2002, the Ankara National Security Court commuted Öcalan’s death sentence to life imprisonment.

Şakran noted that Öcalan still has ongoing cases which await final decisions by the ECHR. Before this decision, which was the second decision ever given for Abdullah Öcalan’s applications to the ECHR, Şakar stated that the ECHR ruled its final decision on 12 May 2005 regarding the the first-ever application of Abdullah Öcalan. “The Court’s Grand Chamber ruled that Mr. Öcalan had not received a fair trial, stating that Article 6 of the Convention was violated by Turkey.”

Even though such a decision of “violation of the right to a fair trial” was given by the ECHR, Abdullah Öcalan’s aggravated life imprisonment sentence was never reviewed by any national or international tribunal. 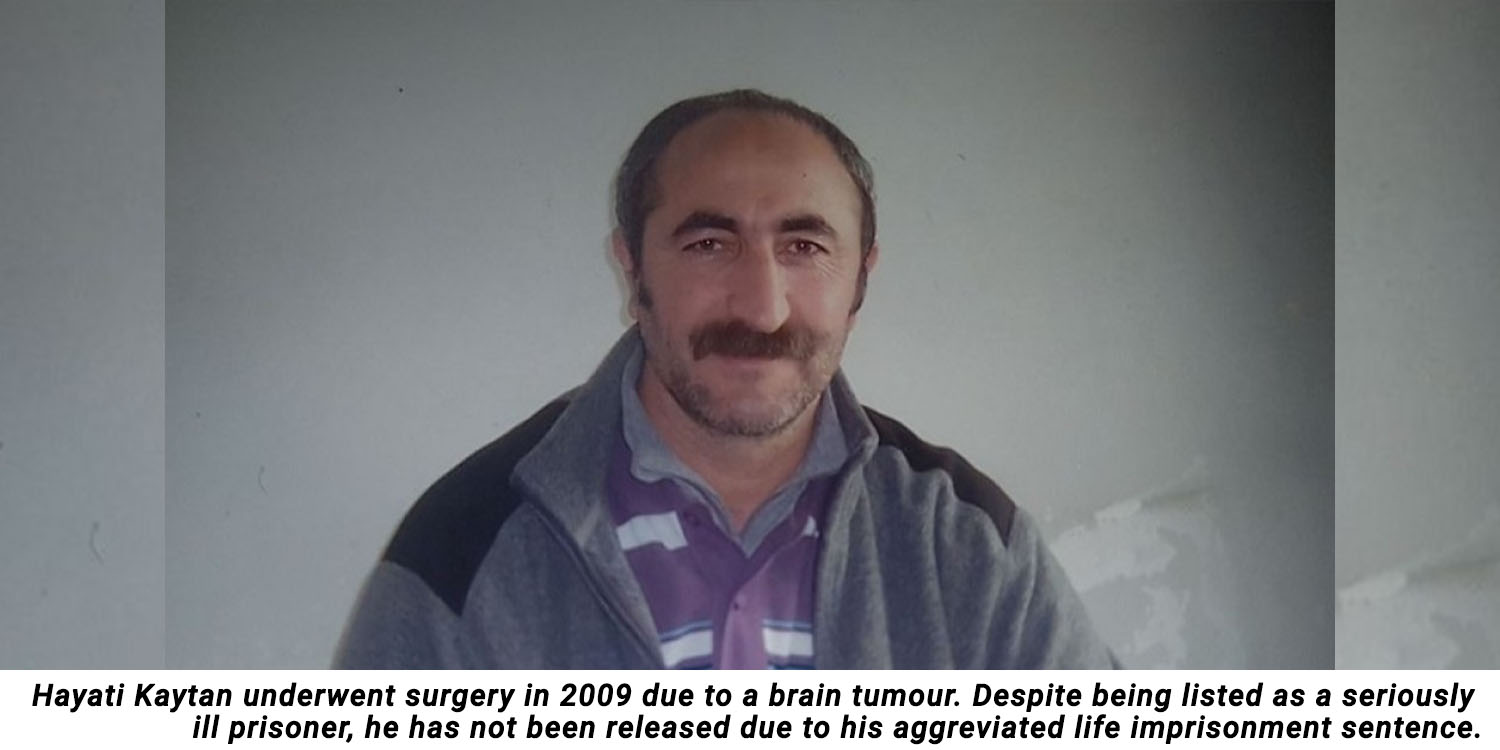 Kaytan has been serving a life sentence, following his conviction in 2005 for charges of ‘terrorism.’ Kaytan was arrested in Syria following his indictment for being a member of the PKK and handed over to the Turkish authorities in August 2003.

Kaytan was then interrogated by Turkish gendarmes and admitted to having been a member of the PKK, but later retracted his statements at trial, alleging that he had been put under psychological pressure during his interrogation.

Kaytan’s lawyers applied to the ECHR in 2015 for the absence of a review of the life sentence imposed on him, stating that this constitutes a breach of Article 3 of the ECHR.

Kaytan underwent surgery in 2009 due to a brain tumour. However, despite having been listed as a seriously ill prisoner, he has not been released due to his aggravated life imprisonment sentence. 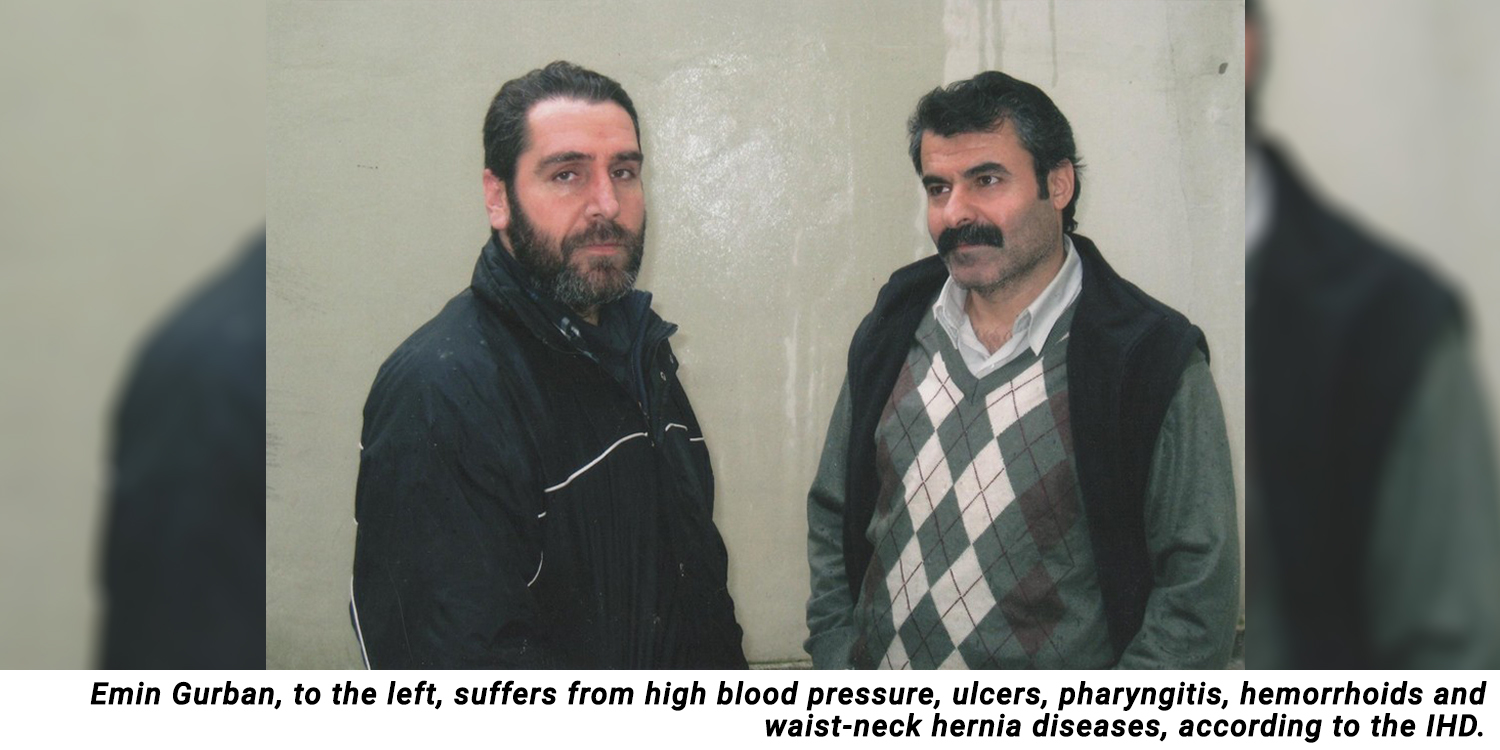 Gurban has been serving a sentence of life imprisonment in Turkey. Arrested and placed in pre-trial detention in October 1996, Gurban was charged with membership of an illegal organisation and taking part in two counts of murder for the organisation.

Gurban’s lawyers in 2003 applied to the ECHR with a complaint of his having no prospects of conditional release.

Gurban has been listed as an ill prisoner by Turkey’s Human Rights Assocation (IHD). He suffers from high blood pressure, ulcers, pharyngitis, hemorrhoids and waist-neck hernia diseases, according to the IHD. In addition, he has problems with walking due to severe pains in his knee. 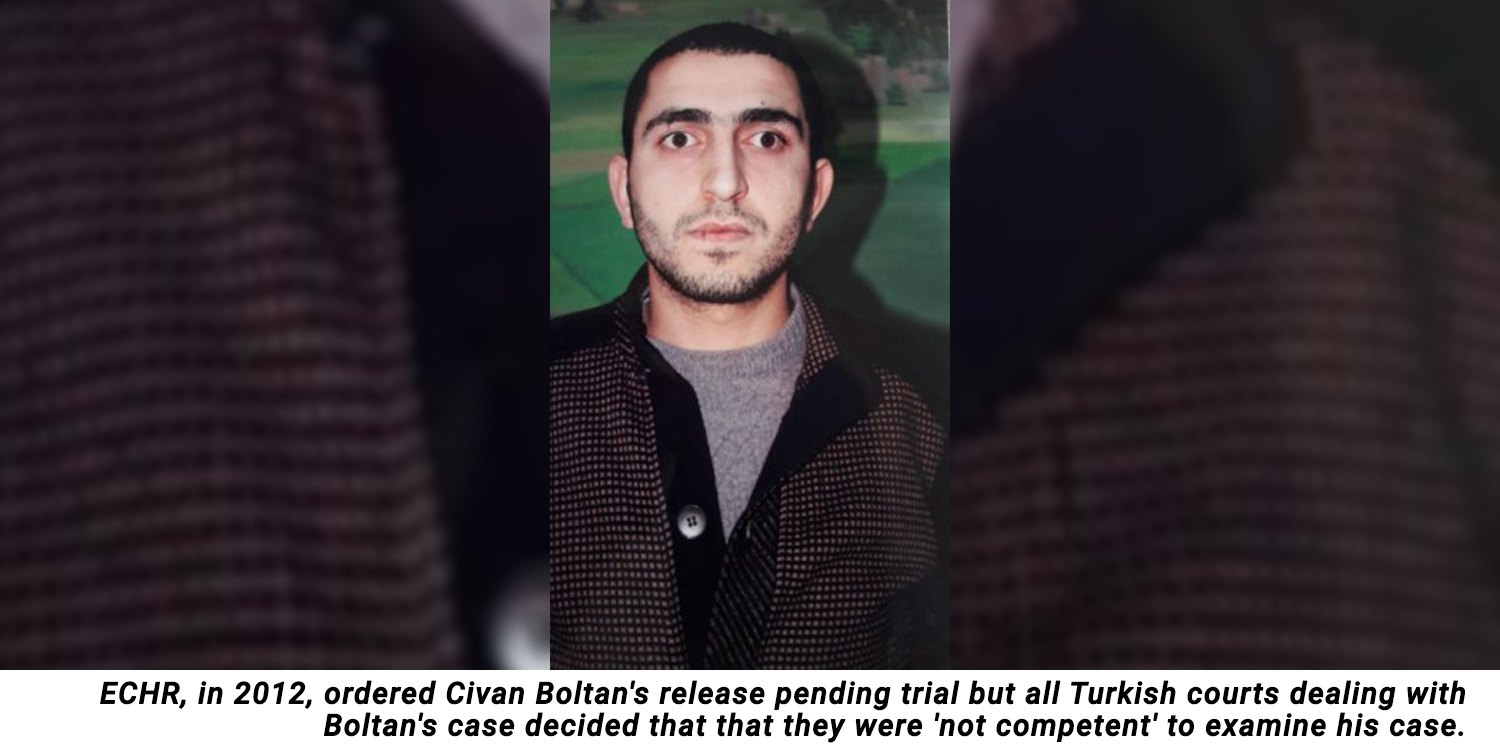 Boltan, the fourth prisoner the NGO’s have highlighted their concerns over, and whose circumstances they want raised to the agenda of the Council of Europe, was arrested on 20 October 2008. Boltan is the son of the Kurdish journalist Hakkı Boltan, who has also been arrested and imprisoned on several occasions.

Boltan was seriously injured in an armed clash with Turkish soldiers in Bingöl (Çewlik). He was thought to have been “dead” but it was later understood that he was alive in a hospital. He has lost his right arm and is blind in his left eye. Civan has been given a heavy life sentence and 78 years of imprisonment.

Boltan, who was a 17-year-old at the time of his arrest, also applied to the ECHR in 2012. The ECHR ordered Boltan’s release pending trial, having taken into account the nature of the offence, the state of the evidence and the total length of the applicant’s pre-trial detention.