Fire of Newroz set all across Turkey

Newroz fires were lit in 36 different urban centres across Turkey, as hundreds of thousands of people gathered to celebrate the coming of the New Year on the spring equinox, and to rally for freedom and democracy.

This year Newroz, the spring equinox, which marks both the coming of the New Year, and a day of uprising for freedom for the Kurdish people, are held with the motto ‘Dem dema serkeftine ye’ (‘Now is the time for victory’).

The celebrations are organised under the leadership of the Democratic Society Congress (DTK), the Peoples’ Democratic Party (HDP), the Free Women’s Movement (Tevgera Jinen Azad -TJA) and the Democratic Regions Party (DBP).

The fires have been lit for freedom and solidarity, and the celebrations have attracted hundreds of thousands of people, both in majority Kurdish provinces, and also in southern and western provinces with a substantial Kurdish population.

Tens of thousands of people gathered in Van (Wan) for the celebrations despite the cold weather and heavy snow. This year the city has seen one of its largest and most vibrant celebrations.

The celebrations started with a moment of silence in commemoration of the fallen fighters of freedom. The celebrations then continued with tens of thousands chanting in unison, “Biji Serok Apo” (Long live Apo), calling for the freedom of Abdullah Öcalan, the imprisoned leader of the Kurdistan Worker’s Party (PKK).

Peoples’ Democratic Party (HDP) branch co-chair Fikret Doğan made a speech, in which he said, ‘A heavy price has been paid to reach this day. You were the ones who paid that price. Thank you all.’

The celebrations continued with a live performance of Kurdish musician Aysel Düzdaş. 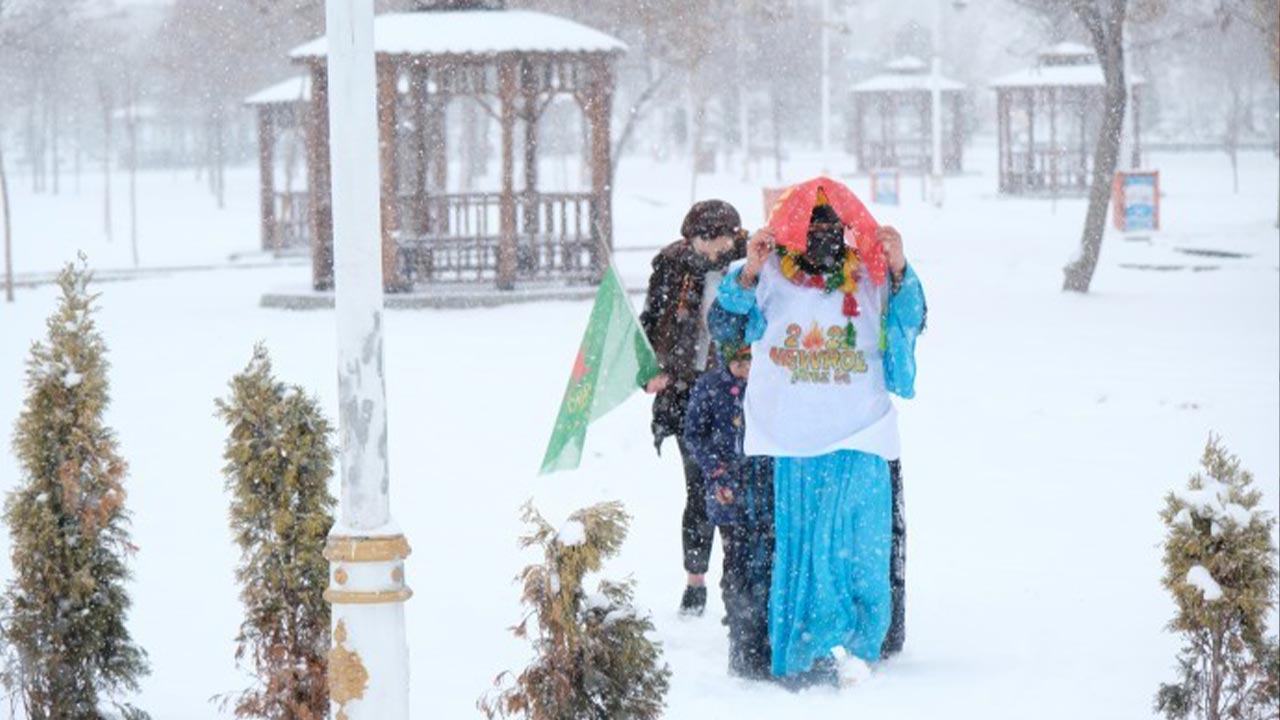 The Newroz celebrations in Urfa (Riha) began with people chanting slogans, women in their bright and colourful traditional dress. The crowd performed traditional dances around the great Newroz fire, and sang ‘Çerxa Şoreşe’ (‘Wheel of Revolution’).

HDP parliamentary co-chair Meral Danış Beştaş, HDP MP for Urfa Nusrettin Maçin and Kurdistan Communist Party General Secretary Sinan Çiftyürek were among those attending alongside representatives of trade unions and many other groups. 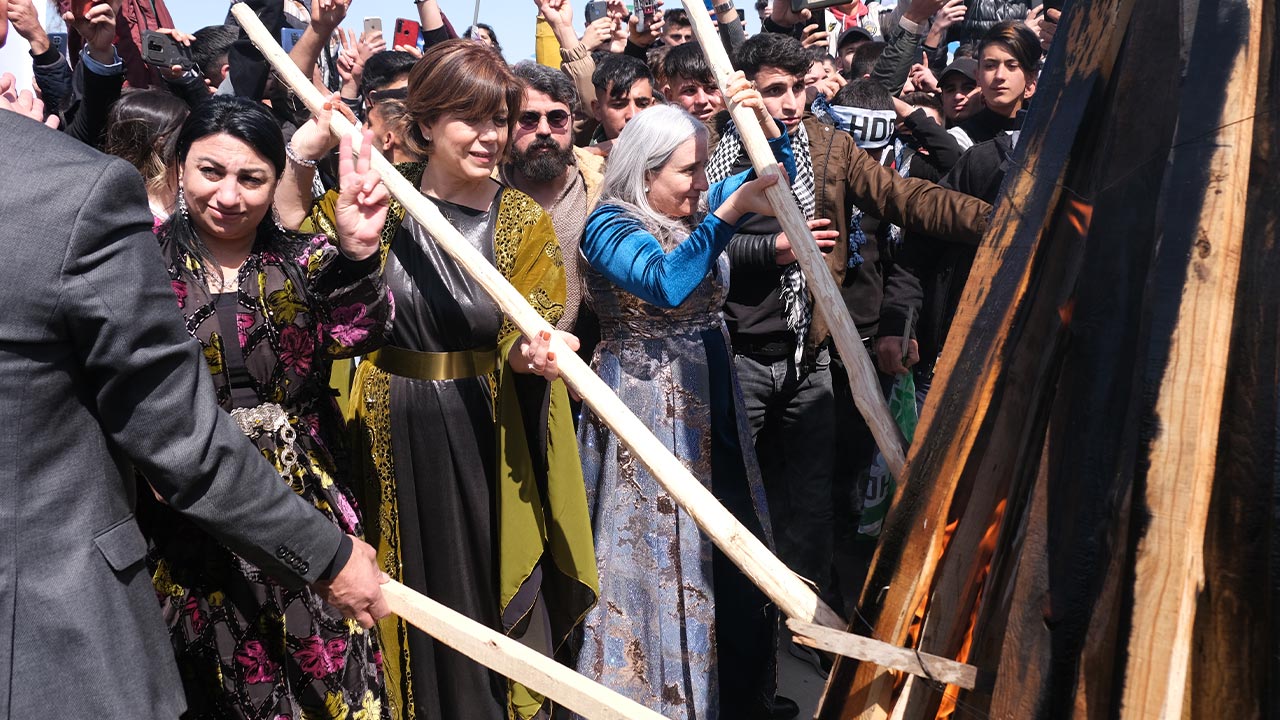 Thousands of people of all ages have flooded into the celebration field in Antep (Dîlok) carrying flags of the HDP in their colourful traditional dress. One banner in the field read: ‘The youth is everywhere with the spirit of ’68.’

The Kurdish musicians Mikail Arslan and Şerzat are expected to perform after the speeches. 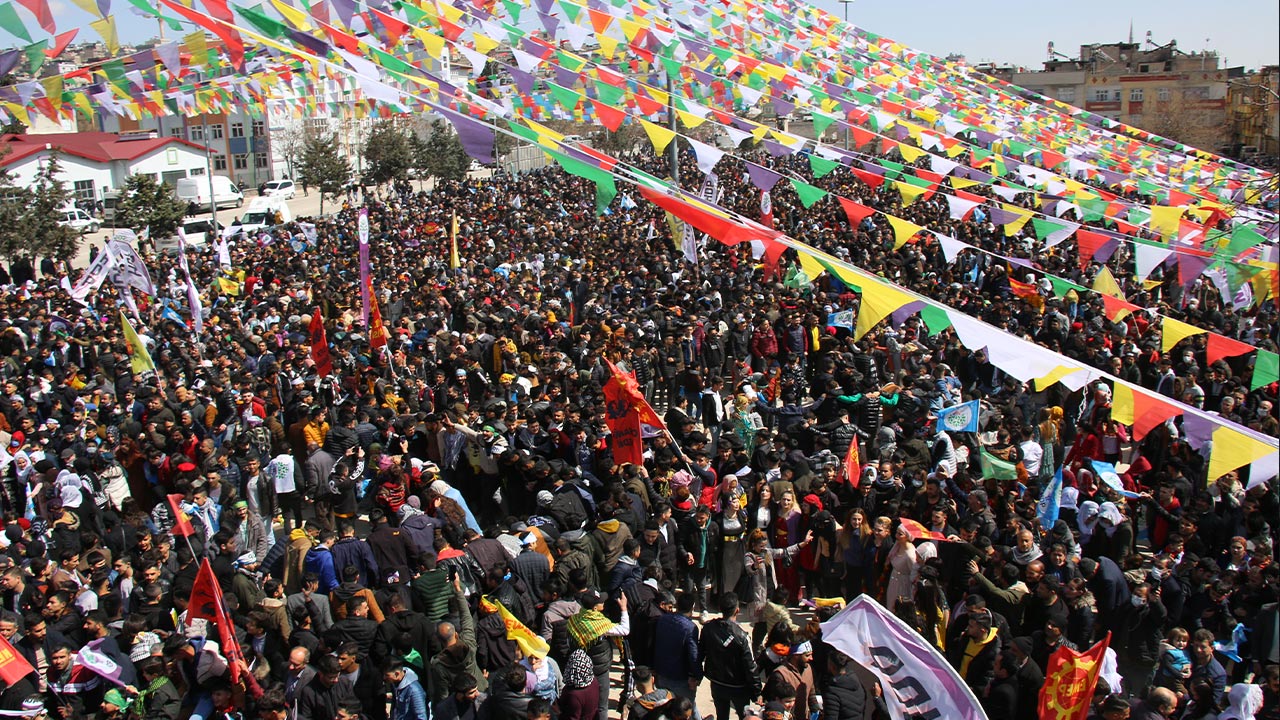 The Newroz celebrations in Batman (Êlih), for which the preparations started days ago, began as the people from the surrounding towns and villages gathered in the Pazaryeri district. The crowd was colourful as always, performing traditional dances to the traditional music.

People chanted ‘Biji serok Apo’ and ‘Be serok jiyan nabe’ (There’s no life without a leader’), calling for freedom for the PKK leader. 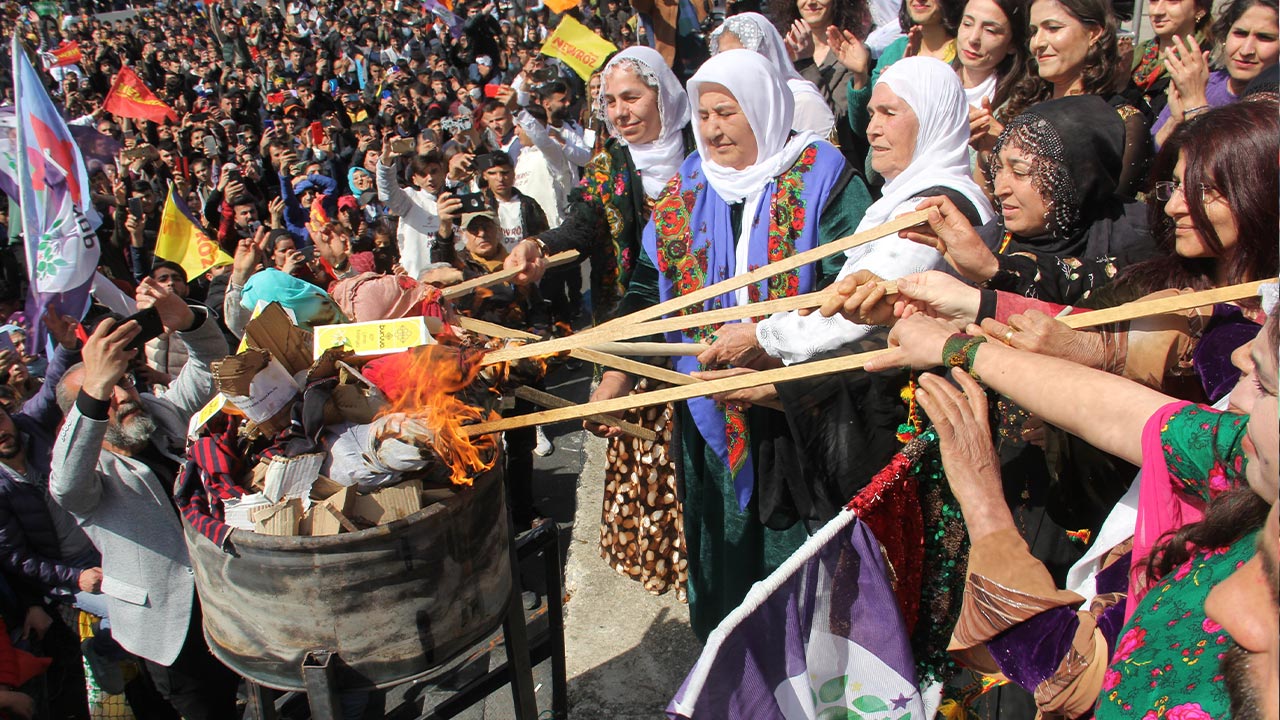 People of Adana gathered in the Mimar Sinan outdoor theatre to celebrate Newroz. The venue was decorated with banners that read ‘Biji tekoşina ciwanen şoreşger’ (Long live the struggle of the revolutionary youth’), ‘We will break the isolation and defeat fascism’, (addressing the severe isolation imposed on Abdullah Öcalan), ‘Newroz pîroz be’ and ‘’Kemal Kurkut lives forever’’.

The police tried to intervene to prevent some people in traditional dress from entering the venue, but this backfired as people reacted angrily to the intervention.