Emine Şenyaşar: I will unearth justice, even if they bury it underground

For seventeen days, Emine Şenyaşar has been calling for justice in Turkey’s southerastern province of Urfa (Riha) in relation to her murdered sons and husband. Having launched a vigil in front of the Urfa Courthouse, demanding a “fair trial” for the perpetrators who killed her loved ones, Emine Şenyaşar spoke to Jin News regarding her cry for justice.

Everyone – except those inside the Urfa Courthouse – has heard of Emine Senyasar, who has been trying for the past three years to make her voice heard for a trial of the perpetrators. She has, most recently, been sitting in front of that courthouse – known as the “address of justice” – for seventeen days, but the justice she has been seeking has still not been found in that courthouse, as a prosecutor in Urfa “banned” her democratic protest.

What is Emine Şenyaşar’s story?

Emine Şenyaşar is a Kurdish woman, who had to face many difficulties and various types of violence during her whole life. However, one day in particular turned into a massive tragedy for her whole family. On 14 June 2018, her husband Hacı Esvet Şenyaşar and two of their sons, Adil and Celal, were killed as a result of an armed attack by the bodyguards and relatives of the Justice and Development Party’s (AKP’s) Urfa deputy, İbrahim Halil Yıldız.

Celal was shot dead in the family’s shop after he told the AKP MP and his entourage to remove themselves from their shop. Celal had added that they would never vote for the AKP MP. During a confrontaion with one member of the AKP group, Mehmet Ali Yıldız was also shot and later died from his wounds.

Later that day, the AKP group stormed the hospital where Hacı Esvet Şenyaşar and Adil Şenyaşar were receiving treatment and brutally attacked and killed them. Fadıl Şenyaşar, another son of the Şenyaşar family, was detained by the police for the death Mehmet Ali Yıldız even before his medical treatment for injuries sustained in the attack had been completed. He has been in prison ever since.

Emine Şenyaşar and her son Ferit Şenyaşar have been holding a vigil outside the Urfa (Riha) courthouse for the past seventeen days. Emine Şenyaşar repeated her demand that the murderers of her family members must face justice. She has been also calling for the release of her son Fadıl Şenyaşar, who is under arrest facing a 150 year imprisonment term despite reportedly acting in self-defence. However, no one from the AKP MP’s group has been brought to justice for killings the Şenyaşar family’s members. 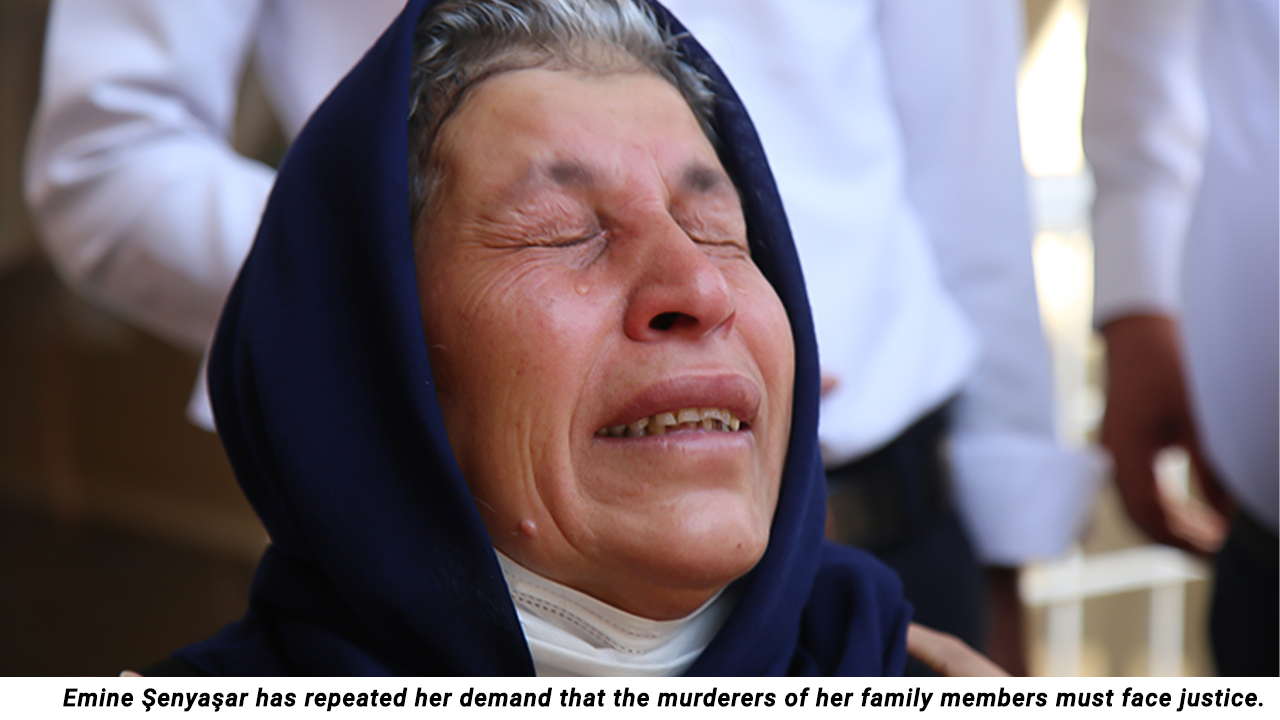 “We were a great family. In the evenings, I used to make tea for all of us: we used to all sit together drinking our tea”, she said, deeply missing those days and times they all spent together as a family. “Now, I have no-one left”, she said in grief: “My son, Celal’s home, was destroyed. My other son who was murdered was younger. He was going to get married. Fadıl had a three-month-old child. But they took my son away from me”.

She wishes those days returned, but it is not possible now. The only thing left for her is the intense feeling of injustice that her family has been through during the past three years. 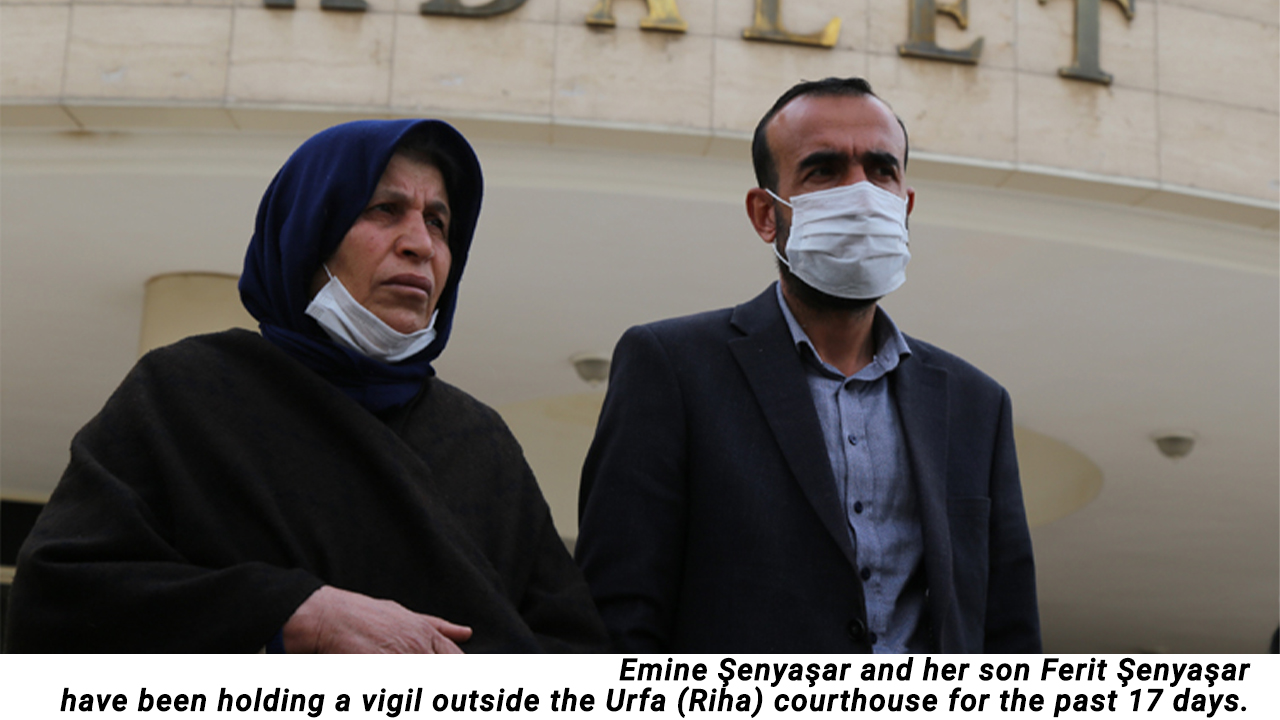 Emine Senyaşar was devastated psychologically after she buried her two sons and her husband at the same time that her other son had been sent to prison. But it was not just that: she became physically ill and has been suffering from heart disease ever since. “They murdered my husband and children. They put my son in prison. My soul, my body, my mind … I am never okay now. My eyes can’t see properly now. I also have a problem with my heart”, she said.

She went to hospital and has been taking prescribed medicines, but states: “None of this is of any help. I know that only ‘justice’ will be my medicine for both my body and soul”, she said.

She stated that she was heartbroken, but more than anything, angry since the perpetrators have not even been held responsible for these crimes. “I will continue to demand justice”, she said. “I will see justice happen, whatever it takes. I will unearth justice, even if they bury it underground”.

All the evidence was destroyed

When she learned that her children were attacked by the AKP Deputy’s relatives, she and her husband ran to the shop that the family owns. “They warned us on the way and said that they would kill us if we went there, but of course we went to see my children”, she said, adding: “When I arrived, I learned that both of my sons were injured. However, neighbours and the police did not allow me to enter the shop. I know both of my sons were just injured, but they murdered them in the hospital”.

Despite the murder in a crowded public space, everyone who witnessed the events remained silent about it. Reportedly, all the evidence was destroyed: even the walls of the hospital were painted in the middle of the night to remove all traces of the evidence.

Emine Şenyaşar remembers every detail: she remembers how they rushed into the hospital, how they were threatened, how her family was attacked the second time in the hospital: “I am the witness of these murders. I saw my son Adil lying on the ground. Blood was flowing from his body. There were a lot of people there, but no one took my children in their car and brought them to the hospital. Celal also said: ‘Don’t take us to the hospital, they will kill us there’. However, nobody listened to them”, she said.

“We went to the hospital as well. Just as we entered the gate of the hospital, they hit my husband in the head with a fire extinguisher. They killed both my sons and my husband right there, at the hospital. My children were injured, yes, but they could have survived if they could receive adequate medical help. Many doctors and nurses resigned after the incident. Although there were soldiers there, they didn’t do anything to protect my family”.