Chloé Troadec on reporting from Rojava: ‘So many war crimes, it is a duty to inform’

Chloé Troadec was amongst a group of volunteer journalists in Rojava who covered the military take-over of Serêkaniyê by Turkish forces in 2019. She describes how two Kurdish journalists she knew were killed in a Turkish strike on a civilian convoy on its way to rescue the injured from the city.

Chloé Troadec, a French volunteer at the Rojava Information Centre (RIC), spoke to Chris Den Hond, and described what she and other volunteers were faced with in North East Syria as the region was affected by successive military operations by Turkey which led to the take-over of areas.

Medya News shares the second part of the translation of the interview, originally published in French on 6 August by Roj Info. The translation has been edited by C. Baraldi.

Chloé Troadec is an international volunteer at the Rojava Information Centre, located in the Autonomous Administration of North and East Syria (AANES), in Rojava.* The centre produces information from the field, press releases and constantly updated files. Troadec explains what the duty to inform is, in this area where Turkish and Turkish-affiliated and sponsored militias have taken control. Many of the local journalists have paid for their commitment with their lives.

How did you report the Battle of Serêkaniyê?

One of my colleagues said it was the busiest moment of her life, after the United States announced its withdrawal. She continuously had two phones glued to her ears, 50 texts and requests for interviews, information flowing from the international press: “What does the Autonomous Administration say? What do the people say? Are they running away?”

Luckily, we were in Ain Issa and recorded the Syrian Democratic Council’s (SDC’s)statement which we released to the world. We had total exclusivity as the only media out there at the time. We immediately made preparations to cover the Turkish attack on Serêkaniyê. During this battle, we had two colleagues working under the bombs. They stayed there for the first three days, before being evacuated with all the other journalists by the Syrian Democratic Forces’ (SDF’s) military command.

“We are obviously frustrated with the way the international press works. During the attack on Gaza in 2009, I will always remember it, France 24 began its news broadcast with a 13-minute report on the snowfall in France. They obviously can’t cover Kurdish news every day, so we are still happy that the Rojava Information Centre can play its role and is regularly contacted by the international press.”

The SDF was no longer able to guarantee their safety. But it was also exploding in Qamishlo. I went to the place where a boy was killed and his sister lost a leg to a bomb on a street. When we went to Tal Tamr, on the front line, we started reporting on the wounded at the hospital. We were trying to produce information continuously. It was a hellish place.

At the Rojava Information Centre (RIC) office in Qamishlo, we kept relieving each other. We stayed up until 4 a.m. to respond, in particular, to the American press, due to the time difference. The others started the day at 4 a.m. We were on maximum alert, reachable 24 hours a day. (…)

Vedat Erdemci, a Kurdish journalist, was killed in Serêkaniyê. He was in the street, filming, on 13 October 2019 and died under the bombs. He was a good friend of mine and one of the nicest men I have ever met. Two other Kurdish journalists, Mohamed Hussein Resho and Saad Ahmed, also lost their lives. They worked for the Kurdish agency ANHA (Hawar News Agency) and Yazidi TV. They died in a Turkish bombardment of a civilian convoy, on its way to rescue the injured from Serêkaniyê. The Turkish forces and their mercenaries were also firing at ambulances. 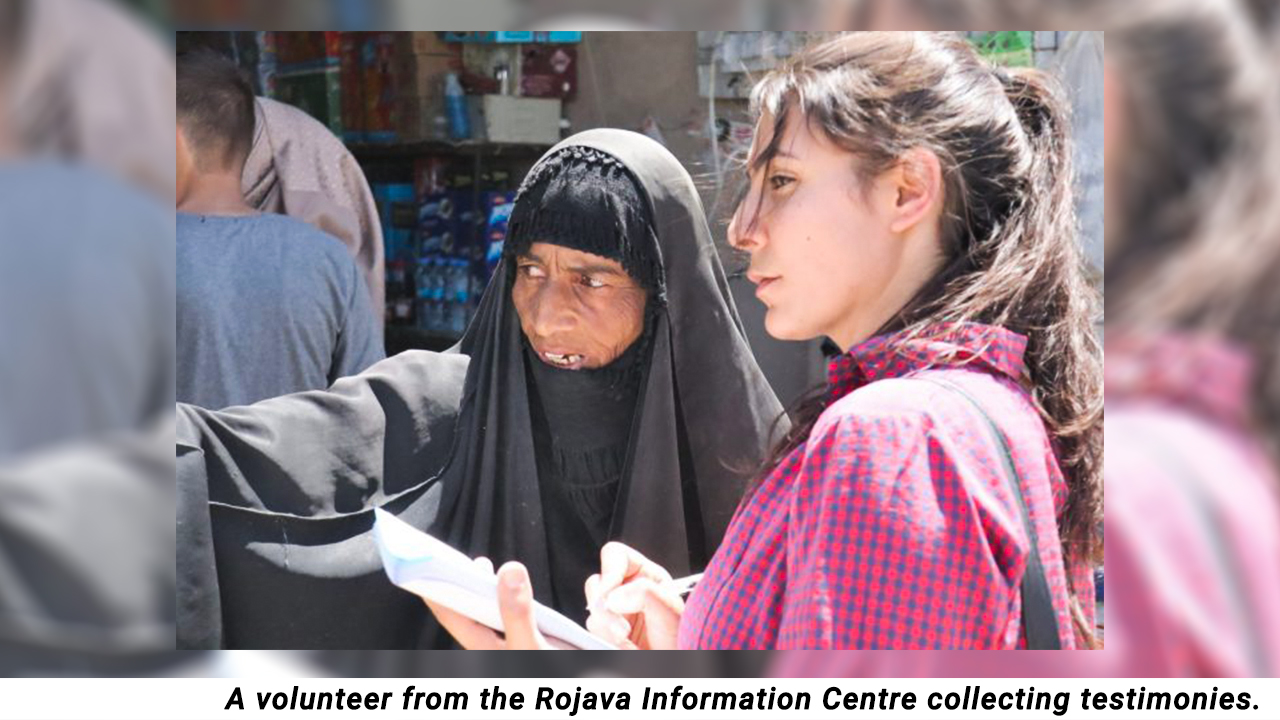 Are you generally satisfied with your work?

We are obviously frustrated with the way the international press works. During the attack on Gaza in 2009, I will always remember it, France 24 began its news broadcast with a 13-minute report on the snowfall in France. They obviously can’t cover Kurdish news every day, so we are still happy that the Rojava Information Centre can play its role and is regularly contacted by the international press. And the Centre is expanding. Our Arabic speaking colleagues have created an Arabic section of the RIC. This is particularly important, given that the solution to the Syrian crisis will originate from the Middle East.

One method that we often use are press releases: they are short and focused on current events. We just did one on the water crisis. We often hear that the ‘water war’ will rage everywhere in 2050. In Rojava, we are already living it. Currently, there are a million people without water in the Hasake region. (…) Our latest research dossier, ‘The State of the Occupation,’ focuses on the areas of the Autonomous Administration of North and East Syria (AANES) occupied by Turkey, as well as Afrin and the M4 highway line, the highway that runs along the Tal Abyad – Serekeniye area. There is also the Jarablous – Al Bab area, which is very difficult to get information from.

We report on crimes committed by Turkey in the occupied areas. And we have decided to make quarterly updates. They’re on arbitrary arrests, torture, theft, rape, assassinations in prison, the missing, the situation of kidnapped women raped, murdered by Turkish mercenaries in the occupied areas. These all show that this is a real colonization with ethnic cleansing carried out and absolute political and military control of the area by Turkey, coupled with the silencing of the Kurdish population. 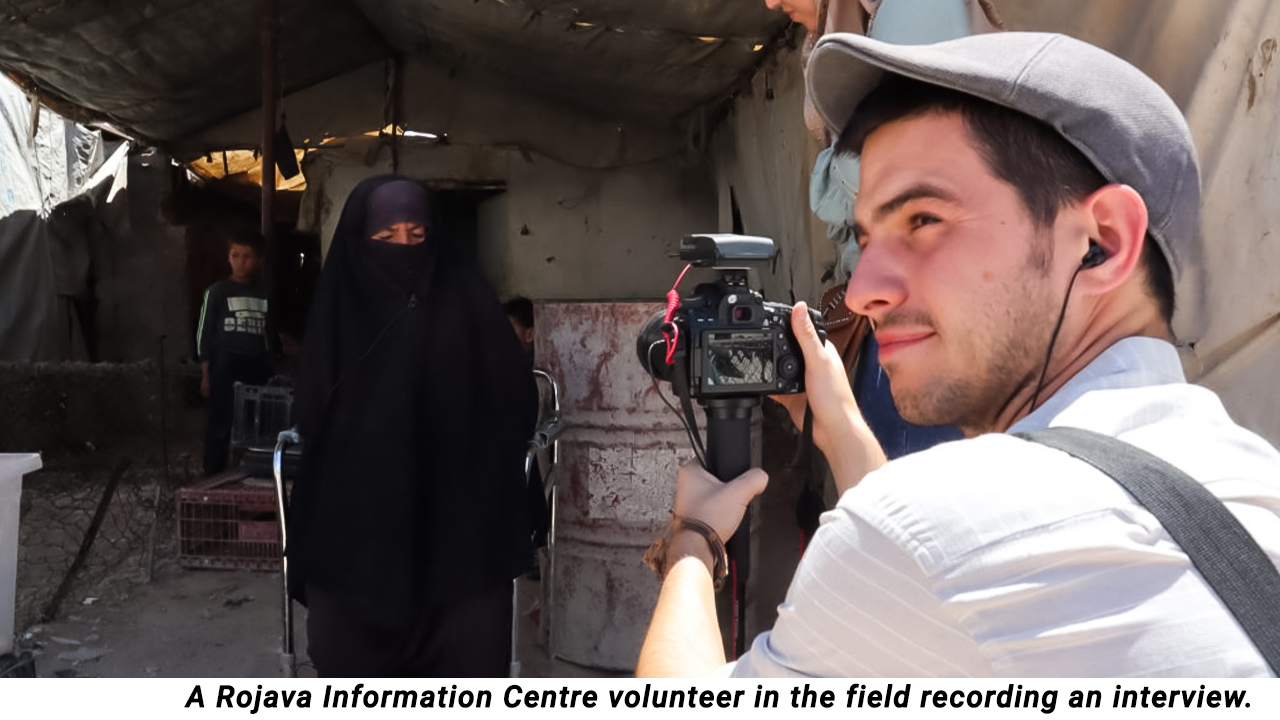 The few Kurds who have stayed say they live in constant fear. Getting information from inside Afrin is our main challenge. So we go to Aleppo or Tel Rifaat [Shehba], the areas nearby, and talk to the refugees who are in contact with their families who remained in Afrin. Some have been recently released after a year or more in prison, and share the horror of their experience. We do very few phone interviews with people in Afrin because they are afraid that their numbers could be identified if their phones are confiscated by pro-Turkish militias.

When you go to Tel Rifaat, you realize that everyone has been affected.: “In my village, they seized my house, my olive oil press machine,” one says, for instance. There are people who show us the photo of the man who occupied their house. The mercenaries affiliated with Turkey act with such impunity that they share the photos on their Facebook pages.

One of the dramatic moments we had was during the Turkish invasion of Serêkaniyê and Tal Abyad. Three health workers from Heyva-Sor (Kurdish Red Crescent) were murdered on 13 October 2019; two women and a man named Mohammed, all very young. Mohammed’s father was on the phone with his son during his last moments. He heard the mercenaries kill his son. He heard them saying, “Kneel down.” Then they shot him in the head. (…) Most of the time the mercenaries produce the visual materials themselves. They often have pictures or videos of the beheadings on their phones. So many war crimes. There are crimes everywhere, all the time. For us, this is endless work. But it is a duty to inform.

* Historically, Rojava means ‘Western Kurdistan’ or ‘Syrian Kurdistan,’ consisting of three cantons: Afrin, Kobane and Cizire (with Qamishlo). With the loss of Afrin and the take-over from ISIS of Raqqa and Deir ez-Zor, a territory now under the protection of the SDF, the region is no longer a predominantly “Kurdish” territory, but home to different peoples where the Autonomous Administration (AANES) tries to practice the principles of a system called “democratic confederalism.” It must also be noted that the YPG had actually, from the beginning, positioned itself politically against the foundation of a new nation-state and fought for a democratic political system where “living together” is promoted.

First part of the interview can be read via this link.