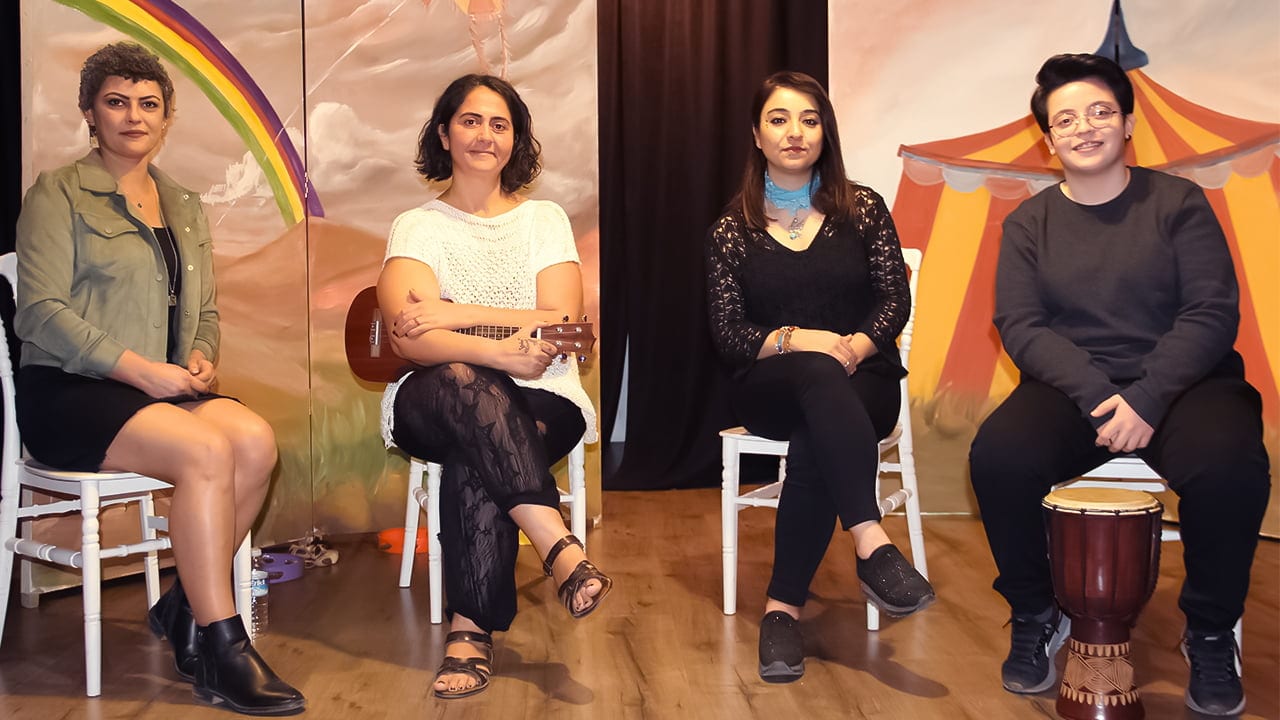 The name of the group, “Çar û Mar”, consists of the words “Tsar”, meaning ”four” in Kurdish, and “Mara”, meaning ”woman” in Arabic.

The group was interviewed by the Mesopotamia Agency (MA). One member of the group, the Arab artist Yeliz Güzel, said they started this project by producing works in the fields of poetry, music and stories. She said they continue their work as four women, with four languages ​​and stories. They initiated such a project to draw attention to the International Day of Struggle and Violence Against Women on 25 November. “We are women who have arrived at this point by fighting violence”, said Güzel. “We are women who are always trying to cope with psychological violence and visible or invisible violence in our lives”.

‘Our differences are our wealth’

Another member, Kurdish poet Jana Med İnanç, said that she learned her native language later. “Different languages ​​are wealth for us”, said İnanç. “Where we live, differences are used to marginalise people. For example, being a woman and using a different language are both used against us. We think the opposite. The other members are impressed when I sing or read poetry in Kurdish. Or we are also impressed when Turkish is read. We create an integrative union by using different languages. It is easier for each of us to express ourselves in our own language. We wanted to bring four languages ​​together and create something beautiful with the collaborative spirit of art”.

In order to bring emotion and spirit together, İnanç said, “We used the unifying power of art. Art is a beautiful expression to express yourself. We perform works in the Persian, Turkish, Kurdish and Arabic languages. In this way, we point out that our differences are our richness. We wanted to show that when oppression exists against language, women and art can come together and collapse the oppression”.

‘Each woman is a story’

Dilek İder, another member of the Çar û Mar group, underlined that they tried to live without discrimination based on language, religion, race. “Women are marginalised in this country. We chose to make our voices heard through art and to show the power of women. Song, poem and story are three different ways of narration. We chose to express ourselves in every possible way. Also, every woman is a story. Everybody tells their stories in their own way to express themselves”.

‘We are strong as women’

Melisa Tura, the youngest member of the group, is a university student. Illustrating how women are more vulnerable to marginalisation, Tura said, “Some women are marginalised because of their appearance. We’re trying to show that we can actually come together and break and achieve many things. We try to do this together with our art. There are different cultures where we live and it is up to us to unite them. As women, we are very strong”.

“The voices of women should be heard in this country”, Tura said, “We are in a period where violence against women is increasing. We want to show that we are here with our art and that we will always stand upright”.