“If you have a lot of properties, your lawyers will mess up somewhere,” says Zack Kopplin, whose report on the unrecorded wealth of the Iraqi Kurdistan's influential Barzani Family was published in December 2021, and whose recent report gives a much more comprehensive account of that hidden wealth.

The Barzani family, which has been ruling the Kurdistan Region in Iraq for decades, holds property worth hundreds of millions in Dubai, an investigation by US journalist Zack Kopplin has revealed.

The more than 300 properties in Dubai worth well over at least $100 million can be traced back to the uncle and wife of the Region’s President Nechirvan Barzani. While the family has accumulated wealth over the decades that they have been ruling the region, the struggle of the people living under their reign to make ends meet has become increasingly hard. The Barzanis haven’t denied Kopplin’s report. Contacted by Medya News, Kopplin said: “They have responded to these stories by attacking me personally. But it’s not about me, it’s about the evidence and they can’t deny the evidence.” 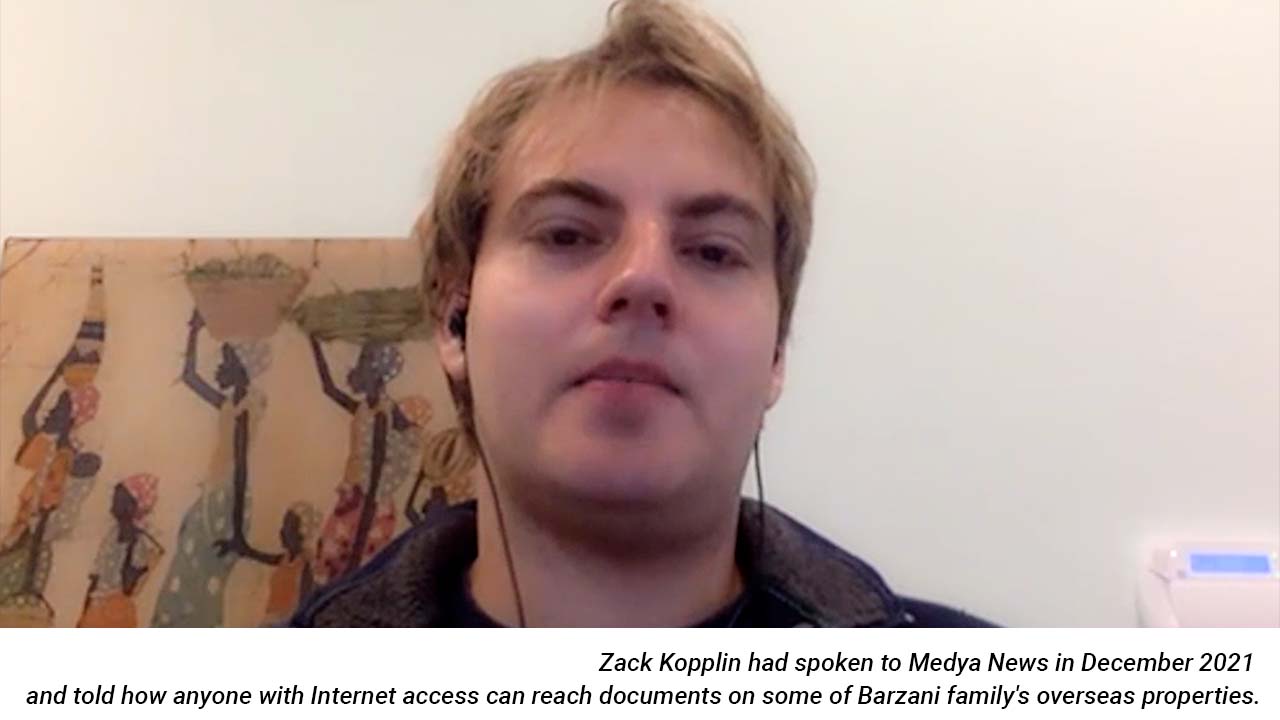 In December last year, Kopplin already revealed that Masrour Barzani, the Kurdistan Region’s Prime Minister and the cousin of the president, was using American corporate secrecy laws to hide property in Miami, US, worth $18.3 million.

Kopplin’s stories about the hidden wealth of the Barzani family are part of a bigger series about corruption in Iraq as a whole. They are all well sourced. Koppling stumbled upon the properties in Dubai when he was investigating the contact of a property owner in Virginia, US, who has a website that is so outdated and unprofessional that it may as well be part of the smoke screen that was set up to hide its clients affiliations. His stories provide links to the evidence and show documents, and Kopplin’s twitter thread provides even more details.

MN: In your article of December 2021, you said your findings were just the ‘tip of the iceberg’. Surely, this was confirmed now. Is it possible for you to make any guess about how huge this could be? And are you expecting more publications in the future about the Barzani clan?

Zack Kopplin, summing up the findings of his investigations so far said: I don’t have any personal estimate I can point to for the Barzani’s wealth, but obviously it is massive, probably 11 figures.

What we can do is trace what is confirmed:

Plus countless investment vehicles like Kar, Ster, that are pretty much open knowledge and confirmed by Wikileaks.

I don’t have anything specific planned about Barzani money as of now. This kind of work is fairly based on getting lucky and finding something and I’ve released pretty much everything I’ve discovered so far.

Your articles are the outcome of months of investigations, and of course, you only report on what you actually unveil. Was this relatively easy to find? The question behind this question is: are the Barzanis so bad at covering up their secret properties?

In terms of Barzani skill at hiding money, I’ve wondered the same thing myself. To take the Masrour Barzani Miami property, I think he found a fine lawyer, but the lawyer just screwed up. In my gut, that feels like a scale issue. If you have a lot of properties, your lawyers will mess up somewhere. The Nabila Barzani [Nabila is Nechirvan Barzani’s wife, MN] house on the other hand might be a different phenomenon. My guess, because it was acquired in 2006, that this was done before they were as savvy at hiding money.

Have you ever tried to link the money the Barzanis have stolen from the people while they were in power over the last many decades to the oil wells that are and have been under their control? This is difficult of course because the oil trade is even more obscure than the Barzanis’ overseas properties turn out to be, but still, we wonder if this is part of your investigation into corruption in Iraq and in the Kurdistan Region?

I’ve found investigating the oil deals to be incredibly difficult. The closest I’ve ever gotten to linking money from the source to the where it was spent was seeing Haval Dosky, a family employee used in both the scheme to cover up the California mansion and a scheme to overcharge the Pentagon for fuel at the Erbil airport. That side of the business isn’t documented publicly, or online, in any way that has been useful for me to track it.

We understand you are investigating Iraq and the Kurdistan Region, but the Barzanis have warm ties with the Erdoğan government in Turkey, and Erdoğan and his huge circle of moguls are intensely corrupt as well. Have you found any Barzani threads that lead to Turkey and that you are currently investigating?

I haven’t gotten too deep on the Turkey side, again the reason for that is opportunity. You need to get lucky and find some angle in on a corrupt property or have a source send you information. Plus, I just have far more familiarity with Iraq and Iraqi Kurdistan in general.

Have you been approached in any way by (people connected to) the Barzani family since your publication in December, or now? Any threats or warnings? We know there have been suggestions that you were having an affair with a Kurdish female activist, Shnyar Anwar, who was also the wife of a former Kurdish MP who was an outspoken critic of Iraqi Kurdistan’s ruling parties.

I have gotten some weird text messages but I wouldn’t call them threats. People, for example, sent me these bizarre pictures on my WhatsApp that they claimed were evidence of me having an affair. Except the pictures were pictures of some other random person who wasn’t me. (Also, I shouldn’t have to say this, but I’ve never met Shnyar Anwar in my life, she wasn’t a source for any of these articles and the allegations that are still being made today are really gross.)

Do you have hopes that your publications will actually change something and bring the fall of the Barzani clan closer? Or is your intention just to reveal the facts without any further goal? You can’t always influence the effect of journalistic work, after all. And you know media in the KRG: they just can’t report this, many Kurds don’t know English and won’t hear anything about this, so many people won’t know. Isn’t that frustrating?

For me, I see journalism as the best I can do in terms of making change, or at minimum a historical record. I’m obviously not a fan of corruption or corrupt people and I think no matter the actual impact, it deserves to be exposed.

You were writing about possible new legislation in the US against lawyers who help obscure properties like this. Do you think this could actually stop this kind of corruption? The Barzanis and others will just go elsewhere, right?

I think the true answer to global corruption is for there to be a lot of major leaks, like the Panama Papers. It needs to happen over and over and over again so the corrupt people learn that no matter where they hide money, it will come out.

I think the big thing that I always make the point is that I show all my evidence. With the Masrour Barzani story you can see his signature. You can see the names of Abbas Barzani and Nabila Barzani on the property records. I didn’t release the database of Dubai properties, but I published the text messages with Salar Hakim where he confirmed owning the Dubai properties (and the phone number I contacted him on came from that database). The Barzanis have responded to these stories by attacking me personally, but it’s not about me, it’s about the evidence and they can’t deny the evidence.