A Turkish soldier rapes a woman in Cyprus, then sent back to Turkey: ‘Soldiers here act like they own the state’

A Turkish specialist corporal posted to the northern part of the island of Cyprus sexually assaulted a young woman by breaking into her home. Rather than facing justice in Cyprus, he was immediately sent back home, to Turkey.

Musa Orhan, the former Turkish sergeant was not jailed despite being sentenced to 10 years of prison almost a year after he initially stood on trial without arrest following his one week detention in August 2020 for kidnapping and raping İpek Er for 20 days on. İpek Er later lost her life after shooting herself in an attempt to take her own life.

The whole trial process of Musa Orhan has provoked widespread public outrage as this has been perceived as yet another example of the Turkish courts’ official stamp of “impunity” for the perpetrators of violence against women, especially those who commit such crimes wearing a law enforcement uniform.

For the Turkish courts, the fact that the attack is carried out against a Kurdish citizen, and the perpetrator of the attack is a member of the state law enforcement agencies is a “contract of impunity”, Yeni Yaşam reported as all the soldiers, police officers or village guards who committed these crimes has not faced justice since the 1990s, despite substantial evidence held against them.

Yet another example of such an attack committed by a Turkish soldier has recently been reported in Cyprus, where Turkey still has 40,000 troops stationed in the northern part of the island despite opposition by Greece.

A Turkish soldier named V.A. serving in the ranks of the Turkish army as a “specialist Corporal” was made to return to Turkey after sexually abused a female student, according to Ayşemden Akın, a journalist in Cyprus working for the daily newspaper Bugün, who answered questions from Yeni Yaşam regarding the background of this attack in Cyprus and how it was covered up.

“The specialist corporal, named V.A. had already started to stalk M.K. during the day and how he stalked her was recorded by the close-circuit cameras. As M.K. arrived in her home, this man knocked her door, she opened it and he immediately attacked her, dragged her to the bathroom and sexually assaulted her. Since she screamed so hard, the neighbours came running. So he flees quickly from the apartment, that was also being recorded by the cameras,” Akın says. 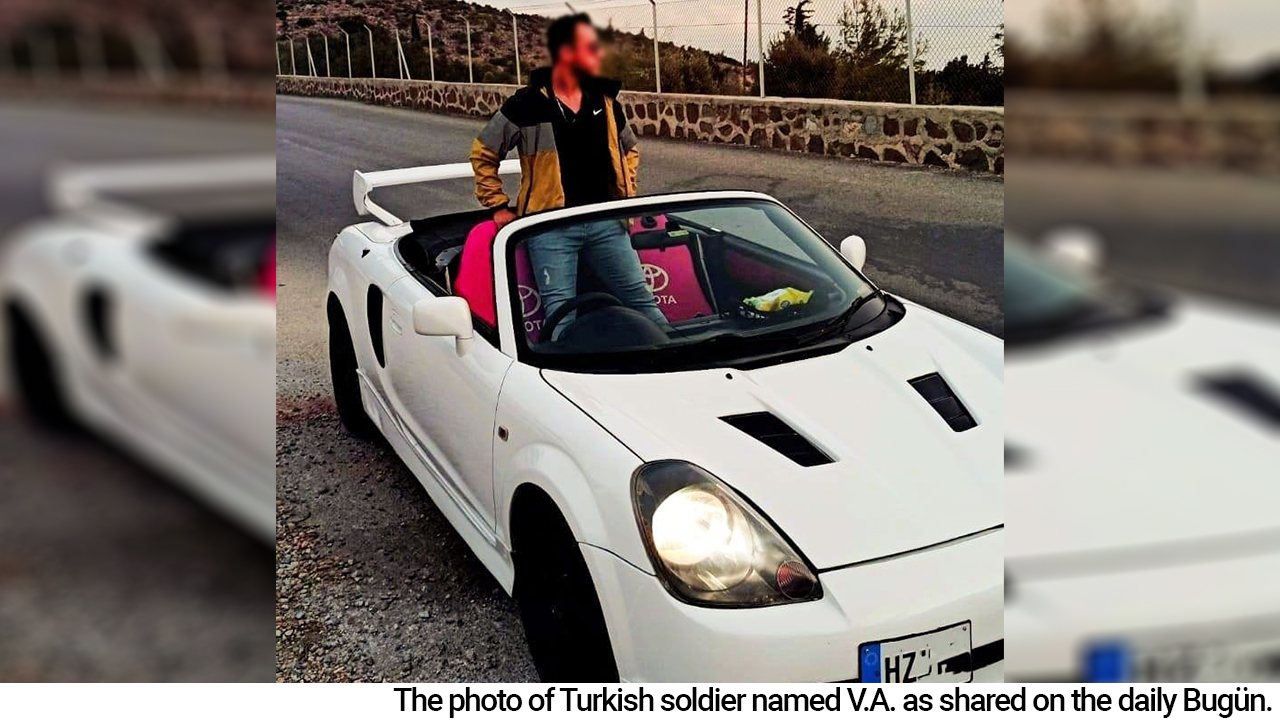 After the attack, M.K. applied to the police and then to the head of the military in Güzelyalı, Cyprus once she learned the perpetrator’s identity that was revealed by the CCTV recordings.

“The rest is on us,” the lieutenant told her.

“Since she didn’t understand what that meant, she asked the lieutenant, if the police would do something or any charges against him would be filed or not. But the military authorities there quickly interrogated the perpetrator themselves and sent him back to Turkey in the blink of an eye,” Akın says.

As M.K. did not let go of her case, she made further contact with the police and military, and finally learnt that the perpetrator was dismissed from his duties, deported from Cyprus and sent back to Turkey.

“They told her that he would face trial in Turkey, but until his trial ends, he would remain free. ‘And watch out, he can come back here as a civilian,’ they warned her,” Akın further explains this scandalous approach of the Turkish military authorities.

“This is both a threat and evidence that this person will not face justice.”

Akın has been following the case of M.K. closely, because there is still a risk that the perpetrator might come back to Cyprus to get back at M.K. and her life is in danger.

“We don’t know whether he rapes other women in Turkey as well, or if he comes back to Cyprus to attack or even kill M. We don’t know any of that and therefore we continue to report on that in our newspaper.” 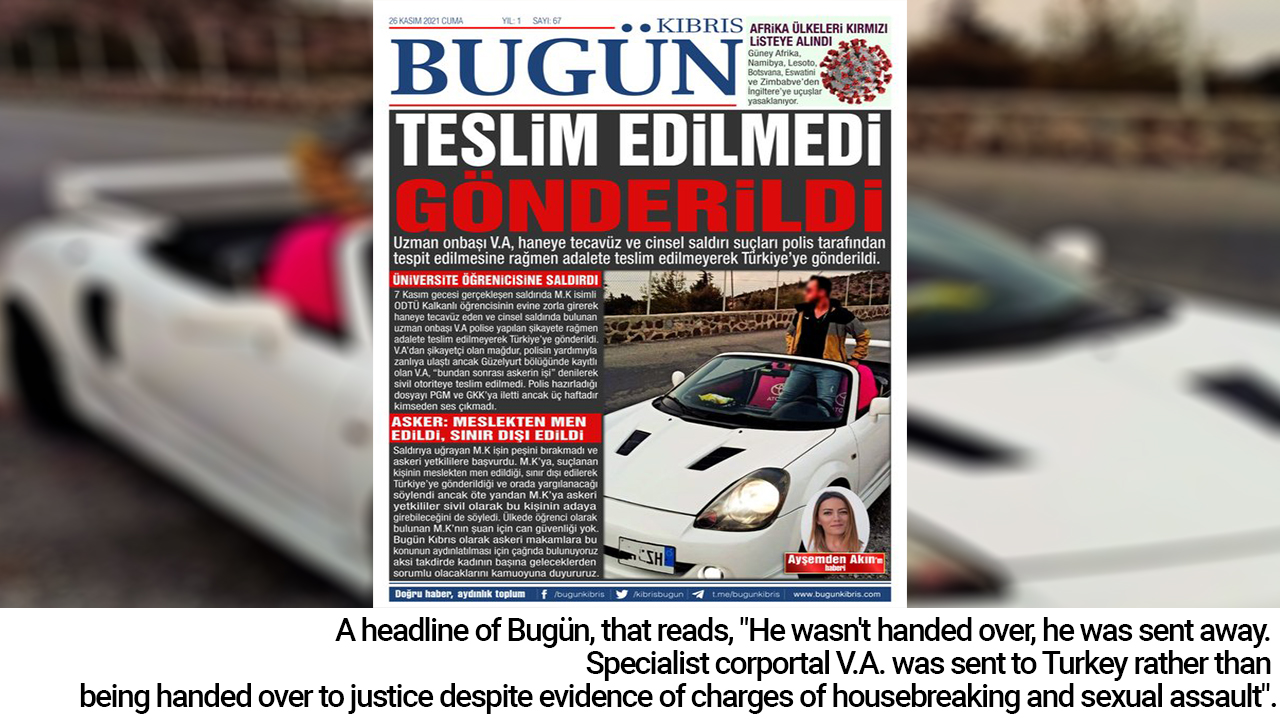 The police in northern Cyprus has no authority in relation to the Turkish soldiers, Akın shared more information regarding the presence of Turkish soldiers on the island.

“There are 40,000 soldiers here, almost one fifth of the whole population here. Normally soldiers are the clerks of the state, but soldiers here act like they own the state. They don’t let the female student claim her rights,” Akın says.

She says that such attacks have repeatedly occurred here since 1974, a year to remember when Turkey invaded Cyprus under the name bringing peace to Cyprus with an operation, dubbed “Operation Peace”, a very similar name for the name chosen for the operations in Afrin (Efrin), northeastern Syria.

“There are many women who suffered from similar, even worse attacks. We are talking about women visiting our island either as students or workers, so that the perpetrators choose among these women knowing that they have no one here,” Akın says.

“These specialist soldiers are all free after 5 pm, they all live in their own apartments, they walk around with alcohol bottles in their hands, drink and sit on the hood of their cars listening to high volumes of music, because they see themselves as the owners of this state.”

She gives a message of solidarity and appeal to the women as a conclusion.

“People think we live a good life here on this island famous for its tourism. But no, we are all suffering here. All our rights have been violated here, all our institutions have been taken away from our hands. We are all a hostage in the hands of Turkish state, for their foreign policies, for their own capital,” she concludes.

“The women’s struggle matters so much, even more so in such a hard period. Both women from Turkey and Cyprus should support M.K. in her struggle. I hope other women reach us and help us to make this voice heard more. Because if we can make people hear about this incident, they will need to do something, change something.”