YPG reveals that the place described in Turkish media propaganda as a 'mass grave' is actually a cemetery containing the graves of YPG and YPJ fighters as well as civilians, which was desecrated after Turkey's occupation of Afrin.

On 14 July Turkey’s Anadolu Agency presented news of the Avesta Cemetery, where the bodies of YPG and YPJ fighters and of civilians who lost their lives due to Turkey’s offensive were buried, as though it were a ‘mass grave’.

Anadolu Agency also claimed that the bodies in the cemetery belonged to people killed by the YPG and YPJ.

On Friday Nuri Mahmoud, spokesperson of the People’s Defence Units, issued a video statement on his official Twitter account regarding the issue.

“I explained the truth behind the allegations by Turkish MoD that a mass grave has been unearthed in Afrin. The international community must see the human rights violations and crimes against humanity [committed] by Turkey and armed groups it supports against the people of Afrin,” Mahmoud wrote sharing two videos.

“There is no truth to those reports and allegations and such methods are usually used by the Turkish regime and the armed groups it supports such as ISIS, al-Nusra, al-Qaida and Muslim Brotherhood,” he said.

He stated that Turkey is trying to ‘fabricate reports’ blaming the YPG for the crimes, which Turkey itself and mercenaries backed by Turkey have been long accused of by many international institutions.

Calling it a ‘despicable attempt’ to smear the democratic ambitions of the people of North East Syria, Mahmoud explained the story of the cemetery in question as follows: “People of Afrin built a cemetery next to the Avrin hospital in Afrin on the last days of war and buried bodies of 71 people, fighters and civillians, who had been killed due to the intense and indiscriminate Turkish bombardment targeting the city centre.”

“Those people were killed by Turkish Attacks in district of Mahmoudiya and next to the hospital.”

Mahmoud called on the international community to see “what is going on in Afrin under Turkish occupation and what Turkish president and the regime are doing to the people of Syria.” 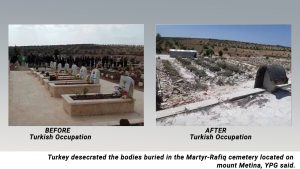 With a slide-show including footage depicting various cemeteries in Afrin before and after Turkey’s occupation, Mahmoud shared the information that after Turkey occupied Afrin, they desecrated the bodies buried in the Martyr-Rafiq cemetery located on mount Metina. 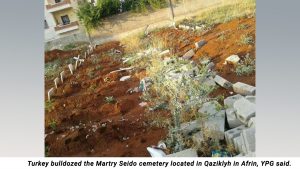 As an example of how Turkish army treated the dead bodies Turkey, Mahmoud said that Turkey had bulldozed some of the graveyards, and showed images of Martry Seido cemetery located in Qaziklyh in Afrin, where the gravestones looked broken and destroyed. 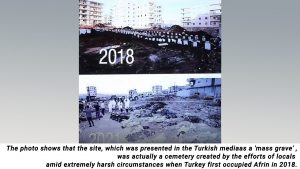 Mahmoud shared satellite images of Afrin, giving details on the location of the cemetery which had been presented as a mass grave, and he also showed footage from 2018 that had been taken in the same spot where the photos described as a mass grave were taken in 2021. 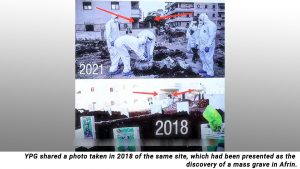 He also shared two images of the cemetery, in both of which the same building appears from different angles. In the photo taken in 2018, the gravestones appear with photos of the fighters on them, whilst the photo taken in the same spot by the Turkish media was presented as the discovery of a mass grave.