Hundreds of women in Sinjar solemnly marked the approaching anniversary of ISIS's genocidal crimes against Yazidis.

When the Islamic State of Iraq and Syria (ISIS) seized Sinjar in Iraqi Kurdistan on 3 August 2014, they executed men and boys, also forcing them into ISIS training camps. They kidnapped, tortured and sexually enslaved women and girls, some as young as nine.

Roughly 10,000 Yazidis were either killed or kidnapped during the assault, according to a 2019 London School of Economics Middle East Centre report.

The United States Holocaust Memorial Museum and the United Nations’ Independent International Commission of Inquiry on Syria released separate reports in 2015 and 2016 determining that ISIS was committing genocide, as well as crimes against humanity and war crimes, in its coordinated assault on the Yazidis of Sinjar.

Among the crimes ISIS has committed against the Yazidis, another unforgottable mistreatment was carved into the collective memory of the Yazidi women as they walked in shackles on Suka Kevin street.

As the anniversary of the genocidal assault approaches, hundreds of Yazidi women gathered for a protest march in Suka Kevin Street recalling those days, to express their sorrow and outrage. 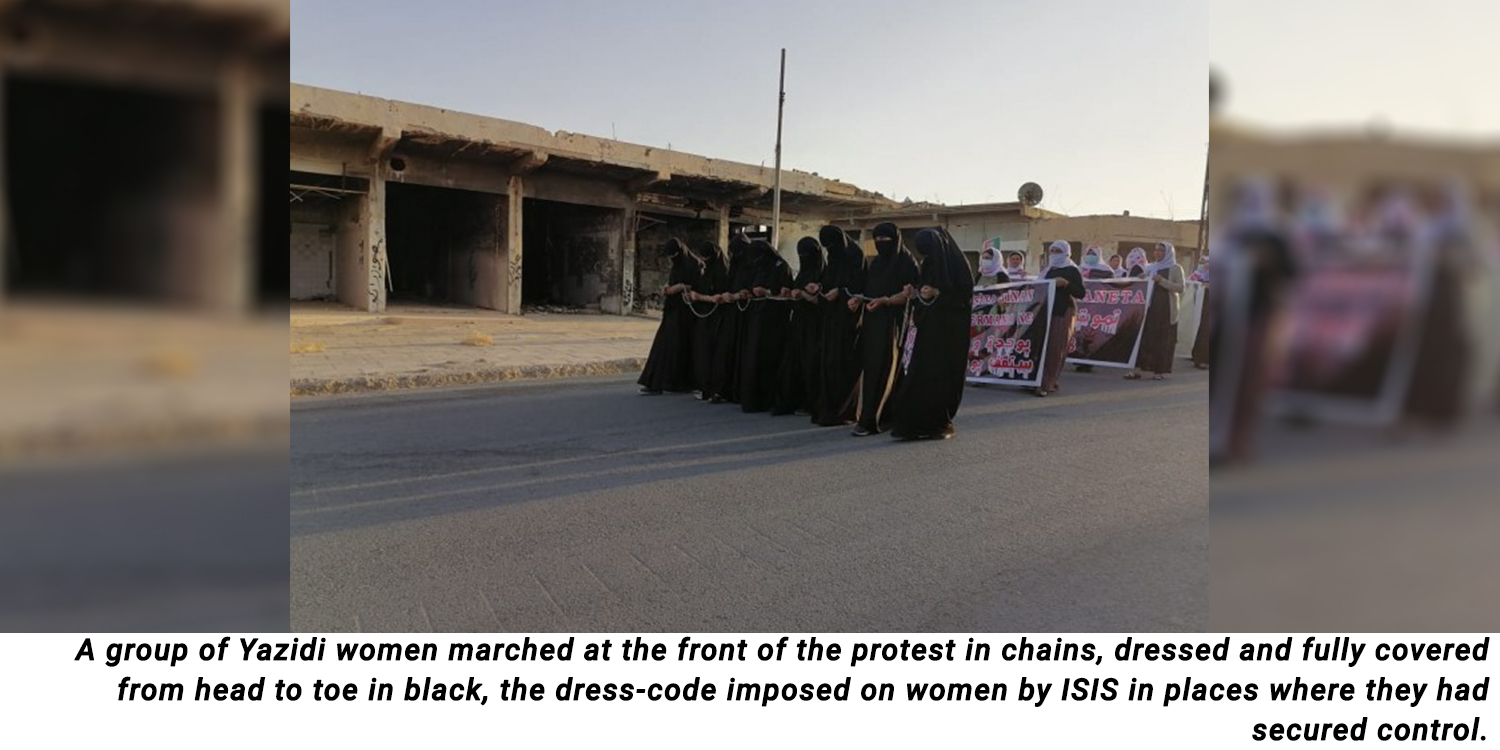 Women chanted the slogans “We want autonomy,” “Long live the Sinjar resistance” and “Women’s resistance and struggle will stop Farmans.” Yazidis call the massacres and genocides they have been subjected to ‘Farmans’ and the last ISIS massacre and genocide is considered to be the 74th Farman.

A group of women marched at the front of the protest in chains, dressed in black and fully veiled, the known dress-code that ISIS imposed on women in places where they had secured control.

“On 3 August 2014, thousands of Yazidi women were made to walk through the streets as slaves. We want to turn the ‘genocide march’ which started from this street to a ‘freedom march’ again, marching freely in this street,” said Hefime Sileman, who read out a press statement on behalf of the Free Yazidi Women’s Movement (TAJÊ).

Sileman appealed to the world: “Recognise the Yazidi genocide.”

“We have seen the sorrow of our children, our daughters, our husbands. In order not to re-experience such suffering, we want self-governance. We have formed our own asayish [security] to defend ourselves. We have formed our military organisation and we have organised ourselves as women,” she said.

An elderly Yazidi woman who spoke to Jinha during the march shared her criticisms of the Kurdistan Democratic Party (KDP). “When ISIS kidnapped our daughters, when ISIS sold our daughters as slaves in the markets, what did the KDP do?,” she asked.

The protest march ended in dramatic fashion when women removed their chains and set their black veils on fire after the press statement was read out.