Yannis Vasilis Yaylalı on the Gare operation: Evil beyond measure

Yannis Vasilis Yaylalı, a former Turkish army soldier who was held as a prisoner by the Kurdistan Workers’ Party (PKK) between 1994-1996 (for a period of more than two years), described the Turkish army’s operation that resulted in the deaths of thirteen prisoners held in Garê as “evil beyond measure”.

Thirteen Turkish soldiers, police officers and intelligence officers, who were prisoners of the PKK, were killed in the military campaign conducted by the Turkish army against the Garê region in the Kurdistan Region of the Republic of Iraq on 10 February.

Although Turkish state officials argued that the PKK had killed thirteen people, the PKK – the target of the military action – announced that the thirteen Turkish soldiers, police officers and intelligence officers who had been held for up to six years had lost their lives in the bombing by Turkish warplanes. Turkey’s public and opposition parties have been asking: “Why was a camp where soldiers were held as prisoners hit by the air strikes?” and “Why hasn’t the government taken any humanitarian initiative for six years and chosen to instead launch a military operation?”. Turkish State authorities have been uncomfortable with these questions and criticisms that have been raised by the opposition.

Yannis Vasilis Yaylalı, as a former PKK-prisoner himself, spoke to Medya News regarding the Gare operation in Iraqi Kurdistan and shared his views concerning the ‘mystery’ surrounding the nature of the killings of the thirteen prisoners of the PKK. “The Erdogan government is a war goverment. They launched an operation which ended unsuccessfully. They killed prisoner soldiers to cover up this defeat. This was an intended massacre”, he said, adding: “This operation has been evil beyond measure”.

‘PKK guerillas risked their own lives for me’

Yaylalı stated that the “PKK guerrillas valued the lives of prisoner soldiers more than their own lives. But the state committed a planned massacre”. Yaylalı had been captured by the PKK during a military operation in 1994 and he was released in 1996 as a result of a series of negotiations by the PKK. “The PKK captured me when I was injured. My first treatment was done. The PKK guerrillas read me the Geneva Prisoners of War Convention articles and told me that they would abide by this convention”. Recalling the operations that took place that day, Yaylalı said: “The soldiers, meanwhile, continued to attack the place where I was injured. To ensure my safety, the PKK guerrillas risked their own lives for me to get me out of there. More than their own, they valued my life”, he observed.

‘We couldn’t even see the Kurds as human beings’

“The Kurds and the PKK were the devil and the elements that should be destroyed”, Yaylalı believed when he was young, when he was a “Turkish nationalist”, he recalls. “We were brought up like this. The education system, the press and the state trained us this way. We had become the weapon of the system. We couldn’t even see the Kurds as human beings”, he said.

“When I was soldier, I used to join the raids on the Kurdish villages. We used to force the villagers to be village guards (‘korucu’). We used to torture those who refused to accept our impositions. We even burned down their stocks and all, but those villagers who we did everything against were still treating us like human beings. They shared the almonds and the honey with us”.

‘I know very well how the PKK protects the prisoner soldiers’

When Yaylalı was such a passionate Turkish nationalist to the point of hating Kurds, he was injured in a military operation, but his friends did not help him and left him there. “Where I was lying was a short distance from where the other soldiers could come and pick me up, but they left me there for dead”, he said. This was how he ended up as a prisoner of the PKK. He shared details of how he was treated by the PKK.

“The guerrilla were responsible for my initial treatment. I know very well how the PKK protects the prisoner soldiers”, he said, “I did not encounter a single insult or incident of mistreatment during the time I spent as a prisoner with the PKK. During our detention, the areas we were kept were often targeted by the Turkish soldiers. Our lives were saved by the guerrillas on many occasions”.

‘Questions began to emerge in my head about the taboos’

Yaylalı based his statements on his own experiences and witness accounts for over two years as a prisoner soldier in PKK camps, which he described as leading to “a great transformation” in his life. “Questions began to emerge in my head about the taboos such as the homeland, the nation, all those taboos we memorized. These were my first breaking points. Memorization is temporary. But the truth remains permanently. This is what I lived through”, he said.

Of course, Yaylalı’s 20-year-old taboos did not disappear suddenly. During his detention in PKK camps for nearly two and a half years, he had been discussing these issues with the guerrillas. “20-year-old memorization of lies does not disappear overnight. During my stay in PKK camps, I also talked and discussed these issues with the guerrillas, but what matters most is practice in life. Whilst the guerrillas repaired their old shoes and used the same old shoes all the time, they used to bring me new shoes”, he said.

“When there was no food, when they had not been eating themselves, they would be giving us food. This was the approach during my stay there. I watched the constructive relationship among them for over two years. All these practices started to break my taboos”.

Yaylalı refers to a specific name that he says he will never forget: Halil İbrahim Uysal, a film director who is known as Halil Dağ after he changed his surname. “You had to be a stone in order not to be affected by his energy”, said Yaylalı, explaining how he was impressed by Halil Dağ. “I stayed in the same area with him for a long time. I had the opportunity to chat with him a lot. He was living his dream in reality. He was very talented. Despite all the impossibilities, he was someone who never gave up. He was someone who pushed his limits to the end”.

‘I devote my remaining life to the struggle for peace’

Yaylalı has been describing himself as a peace advocate ever since he was released by the PKK as he states that when he witnessed the facts of the Kurdish struggle during the time he was held as a prisoner, he started to speak up about the war crimes he and his colleagues were involved in during his military service. He sees truth-telling as his conscientious duty.

For this reason, after he was released by the PKK, he was tried by Turkey’s State Security Court and was detained in a military prison for three and a half months. “It was my conscientious responsibility to tell the facts. I devote my remaining life to the struggle for peace in order to overcome the evil we have done”, he said.

Yaylalı later settled in Roboski village in Uludere district of Şırnak (Şirnex) in Turkey, where 34 people, most of them children, died as a result of the bombardment of warplanes belonging to the Turkish armed forces in 2011. He fought for peace and justice there for years. For this reason, there have been several lawsuits against him.

Yaylalı discovered another truth about who he actually was after he was held prisoner by the PKK. His family met with many institutions and individuals to reach him. Meanwhile, a commander in charge of the General Staff said to his father: “You are Greeks, we call you the Greeks of the PKK. If we say that loudly, you will be in a bad situation, so do not interfere with this issue”.

Yaylalı then began a quest to discover his own roots and identity. He examined the population records in his hometown Bafra. He learned that his grandfather was a Pontus Greek. This quest for his past also revealed that his ancestors were killed in the massacres against Pontus Greeks, and the rest of their relatives emigrated to Greece. Yaylalı was able to discover that his family was deported to the village of Lefkoyia in the Greek area of Drama.

Yaylalı travelled to Greece where he conducted research in that village as well. He then proved his kinship with those living in the village through DNA tests. Following this discovery of his roots, he changed his old name İbrahim to Yannis Vasilis. 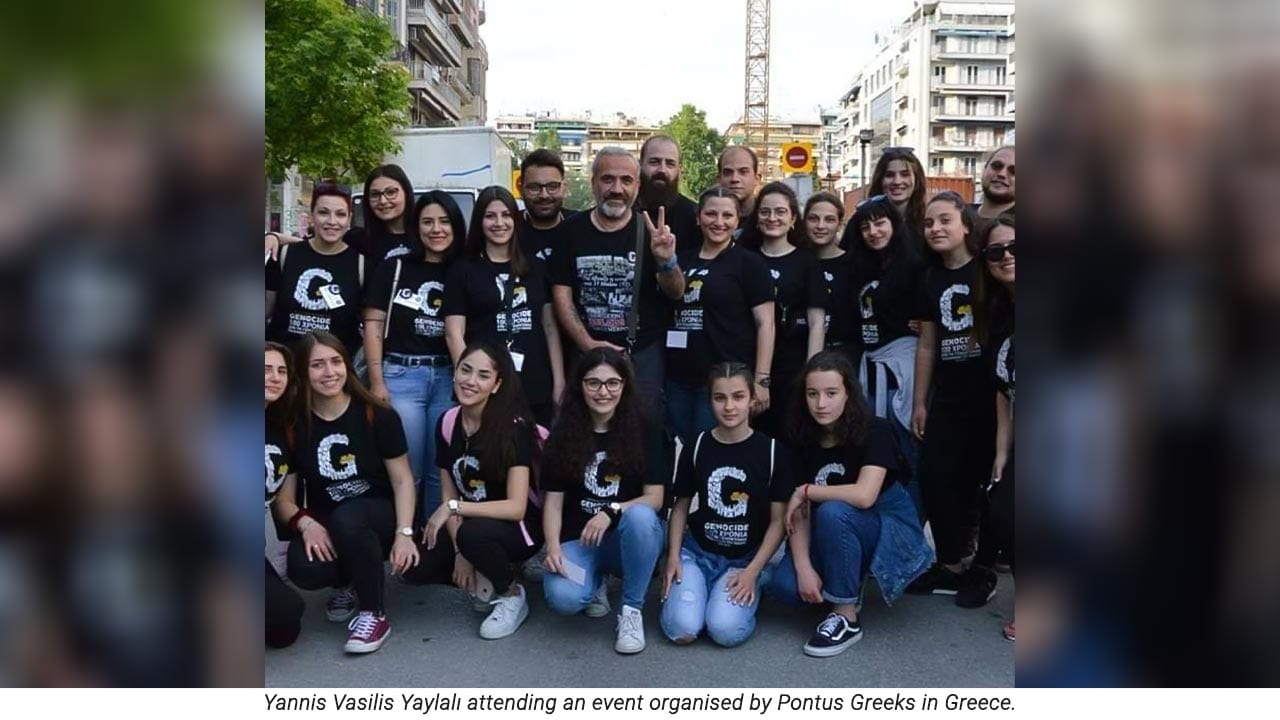 Yaylalı left Turkey in 2019 and went to Greece to evade the prison sentences and lawsuits against him. He is currently a political refugee in Greece. He is not only a refugee, he feels, as he has discovered his Greek identity and now feels at home. “I only feel that I am a refugee during the procedures in the asylum service. Apart from that, I am here with my Pontic Greek relatives. They make me feel at home: they don’t leave me alone”, he said.

‘We must wage a strong struggle for justice’

Yaylali states that between 1990 and 2021, 335 people imprisoned by the PKK have been released through the interventions of human rights organisations and politicians. “During six years, the Turkish government did not pay attention to the appeals of the families of these thirteen people who had been captured, or to the appeals of human rights organisations and politicians. The government went on to execute these prisoners, kill them, despite these appeals”, he said, regarding Turkey’s operation on Mount Garê.