Why I am forever indebted to my Kurdish journalist colleagues

Almost two dozen Kurdish journalists are in detention, their files have a ‘secret’ stamp marked on it, they are not informed about the charges against them and have not been taken to the prosecutor to have their statements taken. As rights violations are piling up again, I can’t help but think of the previous time, eleven years ago, that many journalists were simultaneously jailed. Everything I have learned about journalism in that decade, I owe to my Kurdish colleagues.

Eleven years ago, I lived in Üsküdar, Istanbul, but often travelled to the Kurdish provinces. In late 2011, I attended a funeral of a guerrilla fighter in Diyarbakır. It was the first time I attended a gathering like that. The police were at the corner of the street, demanding banners to be taken down and slogans were being silenced, and even though people complied, still the police started firing teargas. I had just gotten into a conversation with a colleague from Özgür Gündem and together we were trying to find a balance between reporting and escaping the teargas.

The next day, we met for coffee, as I was building a network in the city. He kept anxiously looking over his shoulder and was speaking very softly, making sure nobody could overhear us. He was obviously feeling unsafe.

Late December, back in Istanbul, the news broke that many people, among whom many journalists, had been detained in several cities, also in Diyarbakır. I tried to get in touch with the Özgür Gündem journalist, but to no avail. Within days, I saw his name on the list of those in detention, later formally arrested. It would be years before he was out again. 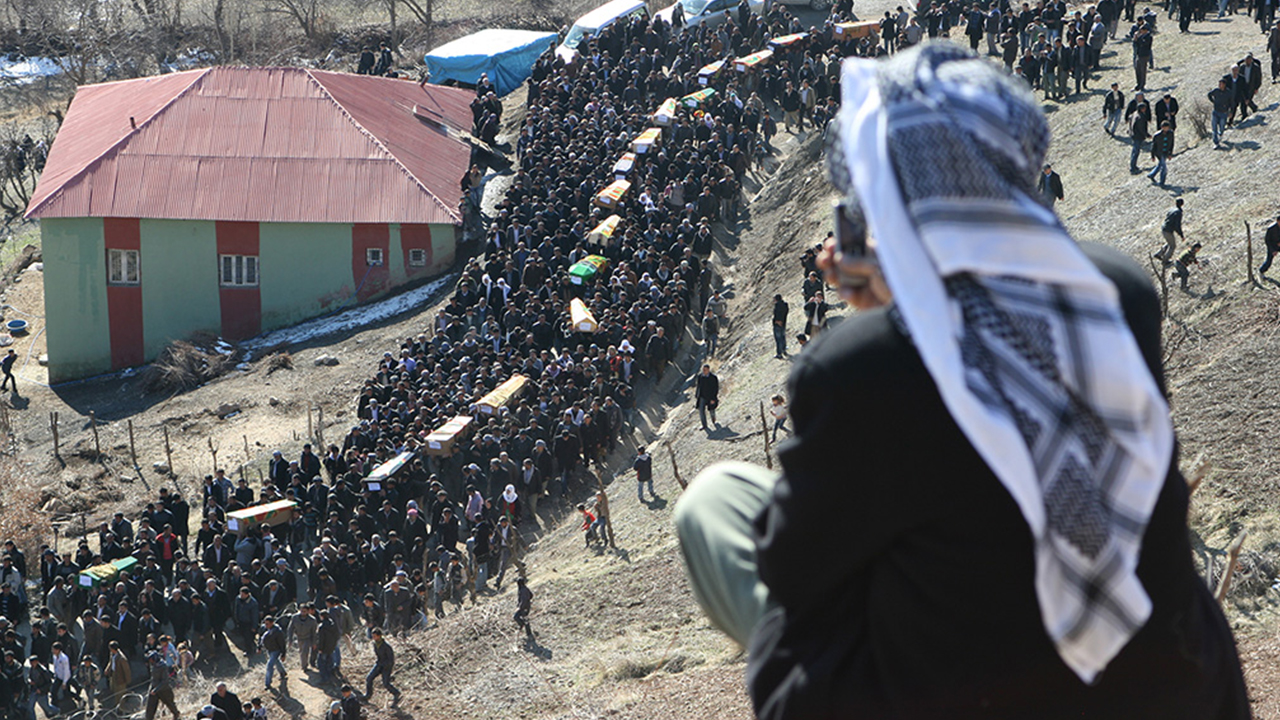 It was the beginning of the so-called KCK press-trials against many journalists, of whom I think 34 were jailed, accused of all kinds of crimes related to terrorism. Even though I was outraged about the unjust prosecutions, I felt uncomfortable too. Uncomfortable about what their kind of journalism said about the journalism I myself was engaged in, to be precise.

Late December, the Roboskî massacre had happened and I had started to investigate it, learning a lot about the Kurdish issue and about the Turkish state. I started to look through a different lens, not only at the massacre, but at the whole of Turkey, especially after I had moved to Diyarbakır in 2012. Some Turkish journalist friends of mine didn’t like it very much. One of them told me that I had to be careful not to become too ‘pro-Kurdish’. His warning kept echoing in my head. If I indeed became too ‘pro-Kurdish’ (did I?), how could I remain a journalist? I had to be objective, right? I didn’t know how to solve this equation.

Rather soon, luckily (because it literally kept me awake at night), I knew I wasn’t becoming less of a journalist at all. I applied journalistic methods, not activist ones. I held pen and paper, not a banner or a megaphone. I was speaking as a journalist in radio shows, not as a campaigner on a stage. I was trying to figure out truths via journalistic methods with an open mind, and I would write down whatever the truth was that I found – what could be more journalistic than that?

Later, this position deepened. I became more aware of how important power was to the equation I was trying to solve. The fact that the Kurds didn’t have any institutional power in Turkey at all, had repercussions for their journalism: their lens was not just defined by them being Kurdish, but also by them not belonging to a dominant group in society. In this position, Kurds had always been forced to adapt to the dominant group, to assimilate even. The result is that Kurds know the state very well, and know power dynamics very well, of course educated by the resistance movement that had emerged since the late 1970s.

And isn’t journalism’s most important task not to hold power to account? Weren’t the Kurds power to account-holders par excellence exactly because they were not in a position of power? And what did this tell me about the journalism of people who had a different position, namely as part of the dominant group in society? Many (not all!) Turkish journalists considered their Kurdish colleagues to be ‘too activist’ and ‘not objective’, while they themselves were part of the power structure at play in Turkey but on the dominant side of the spectrum. The Kurds had access to the people who suffered from the state’s suppression and literally and figuratively spoke their language, while mainstream Turkish journalists had access to power and and gained prestige with that.

Which position is better for journalism? Which kind of journalism should be the default? It had become a rhetorical question in my mind. I felt liberated.

And my journalism changed. Every society has dominant groups and marginalised groups, and if you want to find out the truth as a journalist – and you do, or you’re not a journalist – it helps tremendously to look at the society you cover through the lens of the most marginalised. Also in my own country, the Netherlands, where around a decade ago anti-racism activism had flared up again. As a white woman I have no personal experience with racism (including islamophobia), but the Kurds taught me that looking through the lens of people in the Netherlands who do have that experience, who are marginalised, helps me understand the Netherlands better. It gives me a crystal clear view about the Netherlands, actually.

The insecurity about my position as a journalist that emerged at the time the KCK press trials started, has vanished. Learning from my Kurdish colleagues and from their contribution to the struggle for justice and equality, has made me a better, sharper journalist than I ever could have been without them. And now, yet another few dozen of those journalists par excellence are jailed.

It’s a shame, and my solidarity is as heartfelt and profound as my gratitude.