US lawmakers highlighted in their letter that Turkey may soon purchase 40 new Lockheed Martin F-16 fighter jets and 80 F-16 modernisation kits from the United States government.

Following Turkish President Recep Tayyip Erdoğan’s September announcement that Turkey will purchase an additional tranche of Russian S-400 missile defence systems, Malliotakis and her colleagues stated, that the government cannot afford to compromise US national security “by sending U.S.-manufactured aircraft to a treaty ally which continues to behave like an adversary.”

“As long as President Erdoğan advances his expansionist project in the Eastern Mediterranean, Turkey will continue to threaten our national security and the security of our closest allies in the region—Greece, Israel and Cyprus. We urge you to act in our national interest and for the sake of stability in the Eastern Mediterranean by refusing to reinforce Turkey’s ageing arsenal of fighter jets,” the lawmakers wrote. 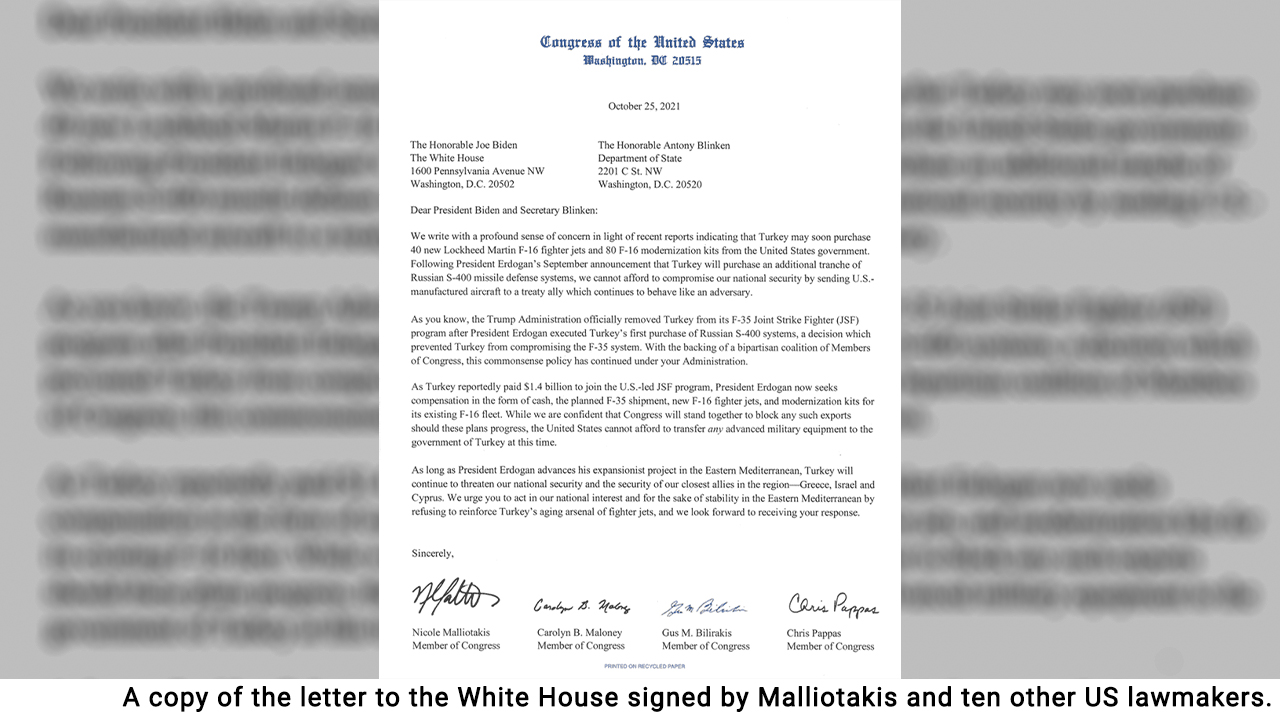 “Today I led my colleagues in urging POTUS [President of the US] to refuse Turkey’s request to purchase 40 new F-16 fighter jets & 80 modernisation kits from the U.S govt. POTUS must act in our national interest for the sake of stability in the Eastern Mediterranean & our allies in the region.”

Turkey made a request to the U.S. to buy 40 Lockheed Martin-made F-16 fighter jets and nearly 80 modernisation kits for its existing warplanes, according to sources who talked to Reuters.

Speaking on 17 October regarding the report on Turkey’s request, Erdoğan said that US had proposed the sale of F-16 fighter jets to Turkey in return for its investment in the F-35 programme, from which Ankara was removed in 2019 after purchasing S-400 missile defence systems from Russia.

“There is the payment of $1.4 billion we have made for the F-35s and the U.S. had such a proposal in return for these payments. And regarding this, we said let’s take whatever steps are needed to be taken to meet the defence needs of our country,” he said.

Turkey’s move to purchase Russian S-400 missile systems in 2017 intensified tension between Ankara and Washington and resulted in the removal of Turkey from the F-35 fighter jet programme in response.

Turkey’s decision to buy Russian S-400 missiles, Francesco Siccardi wrote in September, “was made in the context of a strategic realignment between Turkey and Russia that has helped both countries pursue their respective objectives in Syria: the survival of Syrian leader Bashar al-Assad’s regime for Moscow and the weakening of the Syrian Kurds for Ankara.”

The crisis in US-Turkey relations is therefore evaluated as strongly related to the Syrian crisis.

With a renewed rapprochement between Ankara and Moscow in 2016, ties between two countries entered a new period in which particularly the issue of Syria topped the agenda.

Regional problems, such as “the Kurdish question, Iraq’s fragile statehood, Iran’s growing role in the Middle East and its nuclear program, the Israel-Palestine conflict, and energy reserves in the Eastern Mediterranean basin have all become factors in the multidimensional relationship between Ankara and Moscow,” Middle East Institute’s Kerim Has observed.

The Syrian crisis has been the glue in Turkish-Russian relations in recent years, according to Galip Dalay, a scholar specialising on Turkish politics and the Middle Eastern affairs.

Turkey has launched four military operations in Syria between 2016 to the present day, strongly opposing the presence of the People’s Defence Units (YPG) in northeastern Syria.

Whilst Turkey designates the YPG, who fought against DAESH/ISIS and the Syrian Kurdish opposition Democratic Union Party (PYD), which also leads the Autonomous Administration of North and East Syria (AANES), as terrorist organisations, the US has viewed the YPG as a key ally in the battle against DAESH and openly collaborated with the YPG as the most effective force on the ground in combating DAESH.

The US also sees the PYD as a committed partner in the fight against DAESH in Syria.

In September, US officials told a delegation of the AANES that the US presence in North East Syria will continue to further support the AANES.

In addition to this principal issues, which has come between Ankara and Washington, a potential disagreement between the two countries seems to also resurface with a US appeals court ruling that Turkish state-owned Halkbank can be prosecuted over accusations it helped Iran evade American sanctions.

Halkbank has been charged in a six-count indictment with fraud, money laundering, and sanctions busting offences related to its participation in a multibillion-dollar scheme to evade U.S. sanctions on Iran.