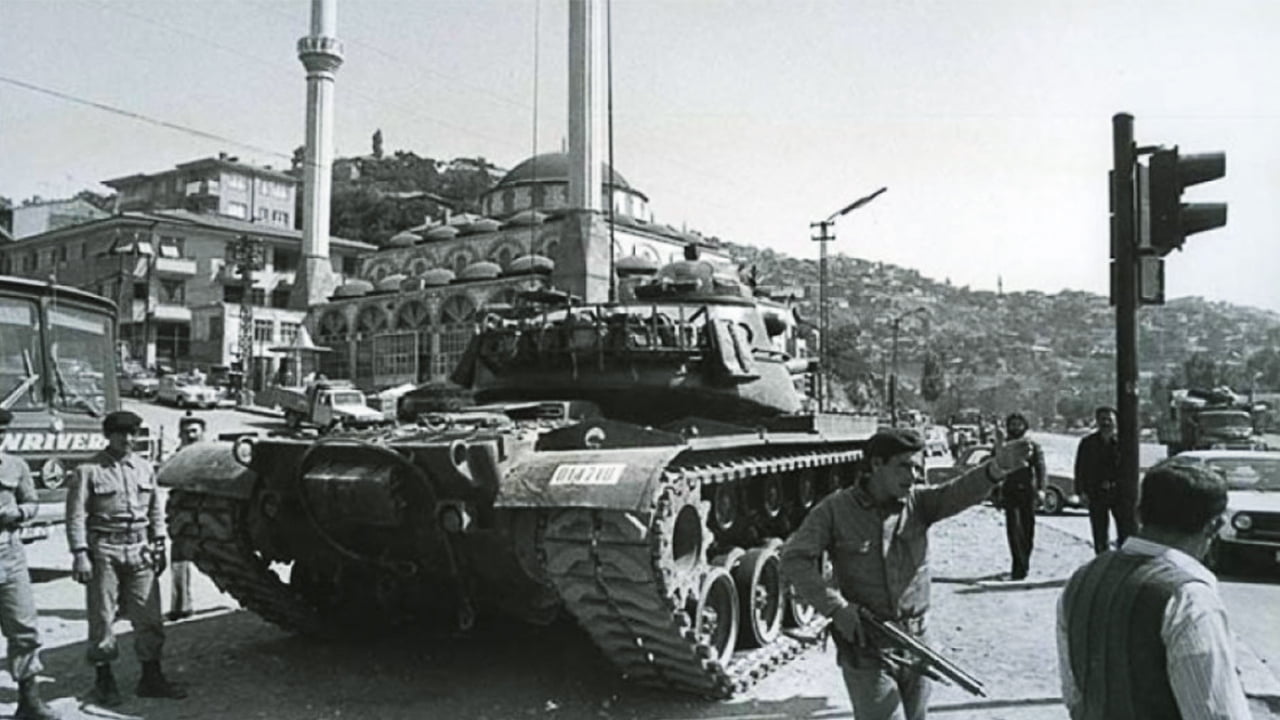 Official statistics state that in the aftermath of the coup, 650,000 people were jailed, 1,683,000 people were blacklisted, 299 people died in prison, and 171 people lost their lives from torture. Political parties and newspapers were shut down. The Kurdish language was banned entirely.

This period of repression is not well known outside of Turkey and Kurdistan. But it likely could not have unfolded as it did had the Turkish military not had the support of the United States, during an era when any and all atrocities could be justified in the name of Cold War geopolitics.

The military leaders who overthrew a civilian government with promises to restore “order” and bring an end to left-wing political activity had been armed, trained, and funded by the US for three decades. American officials still support the same nationalist and militarist tendencies in Turkey today.

After World War II, the United States approached Turkey as a potential key ally in its global effort to “contain” both Soviet military influence and the spread of communist movements. Turkey’s location, bordering the Mediterranean Sea on one side and the Soviet Union on the other, made it strategically valuable. Keeping the country in the hands of a reliably pro-American government became a primary US goal – regardless of the cost to democracy and human rights in the country.

In 1947, US President Harry Truman requested hundreds of millions of dollars in aid for Greece and Turkey, citing the need to protect the two countries from “attempted subjugation by armed minorities or by outside pressures.” He also proposed that American military and civilian personnel go to both countries to help support their governments.

Congress quickly complied. From 1950 to 1983, the United States spent $119,937,000 on military education for 20,413 members of Turkey’s armed forces and sold $1,196,065 worth of weapons to the country. Turkey became a NATO member in 1952, bringing it under a “collective defense” agreement that offered guaranteed international support against any military threat.

The United States imposed an arms embargo on Turkey in response to the 1974 invasion and occupation of Cyprus. This, however, was removed in full by early 1980, when the US and Turkey signed a Defense and Economic Cooperation Agreement (DECA) to renew full military ties.

Like all US Cold War security assistance, none of these programmes came with human rights conditions. Rather, they sent a message that any rights violations committed in the name of repressing dissidents, socialists, and other potential “armed minorities” or “outside pressures” were acceptable.

It was, thus, unsurprising when American leaders praised the coup and its leaders – despite the sweeping abuses perpetrated against Kurds, political opposition, and all other perceived opponents of the state.

When he left office in January 1981, President Jimmy Carter sent an approving letter to Kenan Evren, the Turkish general who led the coup and subsequently ruled Turkey as a military dictator.

“I take particular satisfaction from the knowledge that sustained efforts in Ankara and Washington have put the Turkish-American relationship back on a solid foundation. The most tangible proof is the conclusion last March of the Defense and Economic Cooperation Agreement”, Carter wrote.

“You will have my continued support … as you continue your important work in leading Turkey back to democratic government”.

In a 1982 General Accounting Office report, the Reagan administration appealed to Congress for greater security assistance for Turkey, claiming that DECA commitments had not gone far enough and that the Turkish military needed even more funding in order to meet its NATO responsibilities.

“Turkey will require substantial economic and military assistance for at least several more years. The questions are how much, on what terms, and who will provide the assistance. Turkey is a NATO problem, but unless the allies are willing to increase their contributions, the United States may have to increase its security assistance programme if Turkey is considered vital to US interests”, the report concluded.

In 1988, when welcoming Evren to the White House, President Ronald Reagan said that: “Americans have admired the way that Turkey pulled itself back to democracy when challenged by the violent forces of terrorism and anarchy a decade ago. We are well aware of your own distinguished role, Mr President, in maintaining Turkey’s devotion to the ideals of Ataturk”.

Reagan had opened his speech by approvingly quoting a far-right slogan that political prisoners were often forced to repeat as they were tortured: “The founder of the Turkish Republic, Mustafa Kemal Ataturk, once said, ‘Happy is he who can call himself a Turk’.’ Well, I can say that I understand that sentiment”.

US policymakers continued to defend the coup and its perpetrators long after most political figures in Turkey stopped doing so. Ambassador James Jeffrey, who is currently the most senior US diplomat working on issues related to North and East Syria, was publicly supportive of the crackdown as recently as 2016.

He compared it favourably to the coup attempt against Erdogan that took place that year, stating that “What took place in Turkey [in 2016] was close to a tragedy, a civil war. We should all be glad that it did not succeed. It was very different from the coup I experienced in 1980. The coups we witnessed were planned with care and in line with the chain of command and were realised with the aim of returning to democracy at one point”.

In 2013, Jeffrey wrote an essay arguing that “the Turkish coup of 1980 demonstrates that army intervention can restore democracy” and that the military takeover “stands out as perhaps the most successful of the region’s many military interventions over the past two generations”.

While some measures to restrict arms sales have been taken in recent years – including a ban on the transfer of F-35 fighter jets – the United States also continues to provide almost unquestioned support for the Turkish military. From 2010 to 2020, the US provided Turkey with $92,494,507 in various forms of security assistance.

Just as the atrocities committed by the coup government were framed as a restoration of order and democracy by Carter and Reagan at the time, American policymakers today downplay Turkish aggression in Kurdish regions of Iraq and Syria as actions taken within Turkey’s “legitimate security interests”.

President Donald Trump stated recently that “nobody was killed” in the October 2019 invasion of Sere Kaniye and Tel Abyad, despite repeated reports of brutal war crimes. The US State Department, when asked about airstrikes in the Kurdistan Region of Iraq that had targeted civilians, stated only that “the United States calls on Turkey and Iraq, including the KRG, to work together to defeat the PKK”. A potential American condemnation of the execution of Hevrin Khalaf, the co-chair of the Future Syria Party, was blocked before it could be published.

As long as the most nationalist, militarist, and autocratic elements of the Turkish state can depend on near-unconditional international support, it is unlikely that they will change their behaviour. For the past 40 years, the US has provided them with resources, diplomatic cover, and international impunity, allowing war and autocracy to flourish unchecked.

Today, more Americans should be aware of both the tragedies that took place as a result of the coup and the consequences of Erdoğan’s aggression today – and ask themselves if they believe this long legacy of repression should be enabled in their names and with their resources.