In the early hours of Sunday, 20 November, Turkey began intensive cross-border operations into North East Syria (NES). The Turkish Ministry of National Defense has claimed that Turkey is operating within their rights of ‘self defence’ according to Article 51 of the United Nations (UN) Charter. Turkey invokes their right of self defence following the attack which occurred in Istanbul on 13 November and killed six people. The Turkish state has held the Kurdistan Workers’ Party (PKK) responsible, as well as pro-Kurdish groups on its’ Syrian border who they believe to be affiliated with the PKK, such as the Democratic Union Party (PYD), People’s Defence Units (YPG) and the Autonomous Administration of North and East Syria (AANES).

Despite these accusations, all these groups have denied any responsibility for the attack and have explicitly condemned the killing of civilians. Instead of engaging in dialogue or furthering the investigation into who conducted the attack in Istanbul, Turkey has begun repeated air-strikes on NES, targeting civilians and humanitarian infrastructure such as schools, power stations, oil fields and medical clinics.

So far, the AANES has already reported 26 confirmed causalities including 14 civilians who lost their lives. This number is likely to only grow as the Turkish attacks continue without cease.

The targeting of schools, hospitals, civilian falls directly under the United Nations’ (UN) definition of a war crime.

How can Turkey feel justified to invoke the UN charter when its actions could not be more clearly in violation of the humanitarian law and international conventions laid out by the UN?

We have heard statements from officials from America, Germany, Russia and the president of the European Parliament (EP), Roberta Metsola, condemning the Turkish air raids.

Metsola said during a speech on 22 November:

“Turkish airstrikes we are seeing in northern Syria and Iraq after the bomb attack in Istanbul are claiming more lives and causing more bloodshed… Call on the Turkish authorities to exercise restraint and respect international law and standards.”

The US Department of State said in their statement on 21 November:

“We urge de-escalation in Syria to protect civilian life and support the common goal of defeating ISIS. We continue to oppose any uncoordinated military action in Iraq that violates Iraq’s sovereignty.” 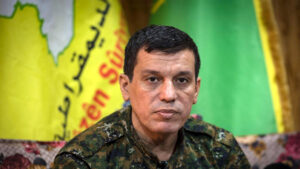 America’s concern that Turkey’s attacks will destabilise the region and delay the US’ and AANES’ shared goal of removing the threat of ISIS is a valid one. On the evening of Wednesday 23 November, Syrian Democratic Forces (SDF) commander Mazloum Abdi reported that Turkey’s airstrikes had targeted ‘Al-Hawl Camp’ which houses approximately 53,000 ISIS-affiliates. As a result of the airstrikes, an unknown number of prisoners were able to escape from the camp. SDF spokesperson Ferhad Shami also reported on the situation, saying six people, half of them women, were arrested by internal security forces (Asayish) after escaping. It is unclear if others are still at large.

This is by no means the first time Turkey’s aggression towards NES has directly resulted in destabilizing the region and particularly the fight against ISIS. On 10 October 2019, the second day of Operation Peace Spring, Turkey shelled near Navkur prison in the northern Syrian city of Qamishlo (Qamishli) close to the Turkish border. In the chaos of the shelling, five ISIS fighters were allowed to escape from the prison.

This is the reality of the situation, if the international community only opposes Turkish attacks on NES with ‘official statements’ and condolences and refuses to take further concrete steps to ensure that the violence ceases, we will not see the end of civilian causalities and the fight against ISIS will become increasingly weakened. We need more than words from politicians, we also need practical aid. Turkey is attacking hospitals, schools and power plants that the civilian population rely on to survive.

Turkey’s operation destroys vital infrastructure and damages the already fragile security of the region. In such a situation it is impossible to maintain or improve stability, stability which is necessary to prevent another rise of ISIS. It is essential not only for North East Syria but the whole world that this region is allowed to pick up the pieces, take care of its civilians and their safety.