In the 'Gezi Case', a Turkish court sentenced human rights defender Osman Kavala to aggravated life imprisonment for 'attempting to overthrow the government', and seven other defendants to 18 years in prison.

Turkish judges announced the verdict in the ‘Gezi Case’ on Monday, sentencing one of the accused to aggravated life imprisonment and seven others to 18 years in prison over charges of attempting and aiding to overthrow the elected government.

Osman Kavala, a businessperson and a human rights activist who has been imprisoned since October 2017 and denied release despite a decision by the European Court of Human Rights (ECHR), was sentenced to aggravated life imprisonment over the charge of attempting to overthrow (Turkish Criminal Law 312).

Mücella Yapıcı, Çiğdem Mater, Hakan Altınay, Mine Özerden, Can Atalay, Tayfun Kahraman, Yiğit Ali Ekmekçi were each sentenced to 18 years in prison for aiding in the overthrow of the government.

The judges also issued an order for the immediate arrest of the accused who were not yet in custody.

While the decision was taken with a majority vote of two against one, the opposing judge Kürşad Bektaş said that the only evidence in the case were some voice recordings and that these had been recorded illegally.

The court’s decision was met with boos and slogans from the audience in the court room. The people chanted, ‘Everywhere is Taksim, everywhere there is resistance.’

In a previous court session of the trial in February, Nacho Sánchez Amor, member of the European Parliament (EP) and the EP’s Standing Rapporteur on Turkey, had described the trial as a ‘mockery’ and called upon the Turkish judiciary to respect the rulings of the ECHR. 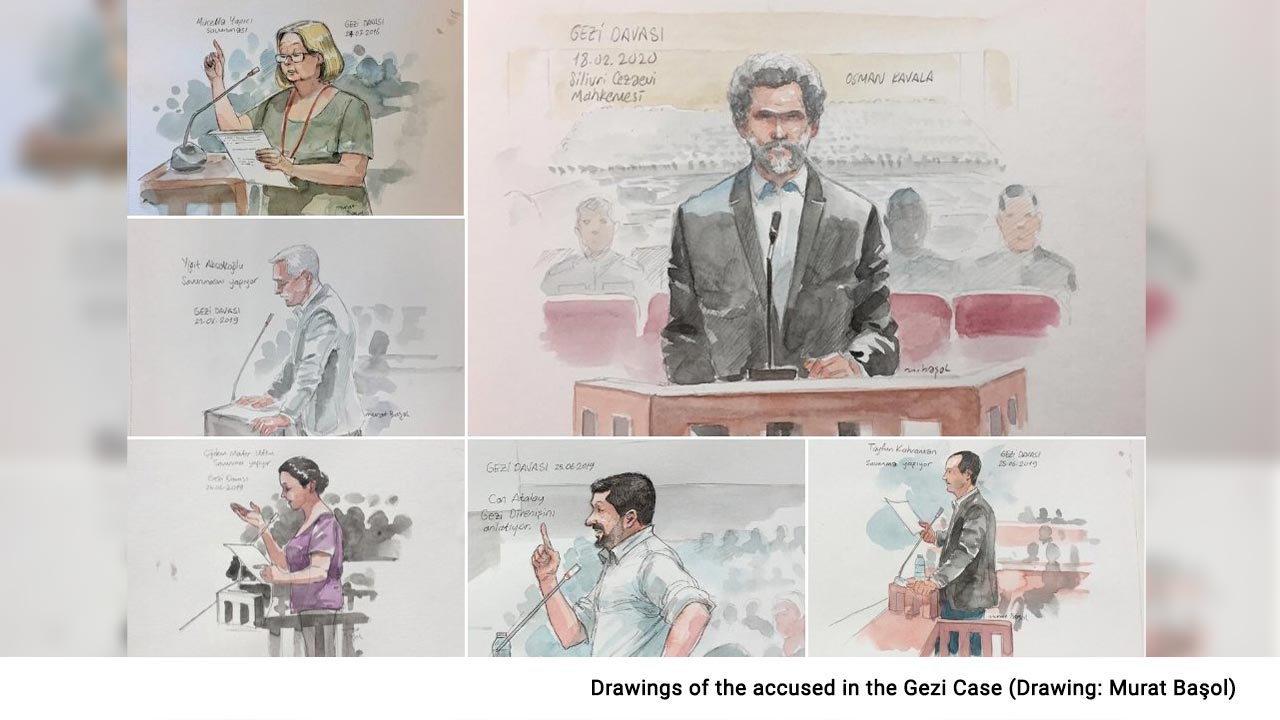 The trial is actually the third one in a series of trials since 2014, and the third attempt to punish some of the alleged leading figures in the historical Gezi protests that occurred between 28 May and the end of August in 2013.

The first trial in the Case started in March 2014 and resulted in the acquittal of the accused in February 2015. A second trial followed in 2019 which resulted with acquittals for a second time in February 2020 due to ‘lack of solid evidence.’

The Gezi protests of 2013 attracted millions of people after a small group of environmental activists who tried to prevent the cutting down of trees in the Gezi Park near Istanbul’s Taksim Square were subjected to brutal police violence.

While at least 3.5 million people of various political affiliations actively participated in the protests, 11 protestors were killed and over 8,100 injured due to police violence.