A recently published report documents systematic attacks by state forces on the graves of Kurdish fighters, and on entire cemeteries, particularly in the period between 2015-2020.

The report, published by MOJUST and the Turkey-based Association of Lawyers for Freedom (ÖHD), provides an account of acts of destruction by Turkish authorities against Kurdish cemeteries, graves and gravestones in Turkey between 2015 and the end of 2020.

Nejbir’s report also presents a political context to these acts of destruction, discussing ‘Turkey’s Kurdish suppression policy’ from 1923 to 2002, and then from 2002 to the present under the  Erdoğan regime.

2015-2020 is the five year period following the point when the ‘pseudo peace project’, as Nejbir calls it, was terminated.

The peace process in question took place when Turkish President Erdoğan’s Justice and Development Party (AKP) ‘used the Kurdish issue as a political tool to gain sizeable and credible support from the European Union in order to demolish the Kemalist state monopoly and to establish its own civil tyranny,’ the report remarks.

The report also demonstrates how the pro-Kurdish Peoples’ Democracy Party (HDP), has persistently tried to hold the executive accountable in the Turkish parliament for the attacks on the cemeteries and graves, referring to the 23 motions submitted by HDP MPs between 2 May 2019 and 17 June 2020 with regard to the matter, noting that the lack of any oral and written reply to these motions confirms that these crimes have been ‘systematized and institutionalized by the State’. 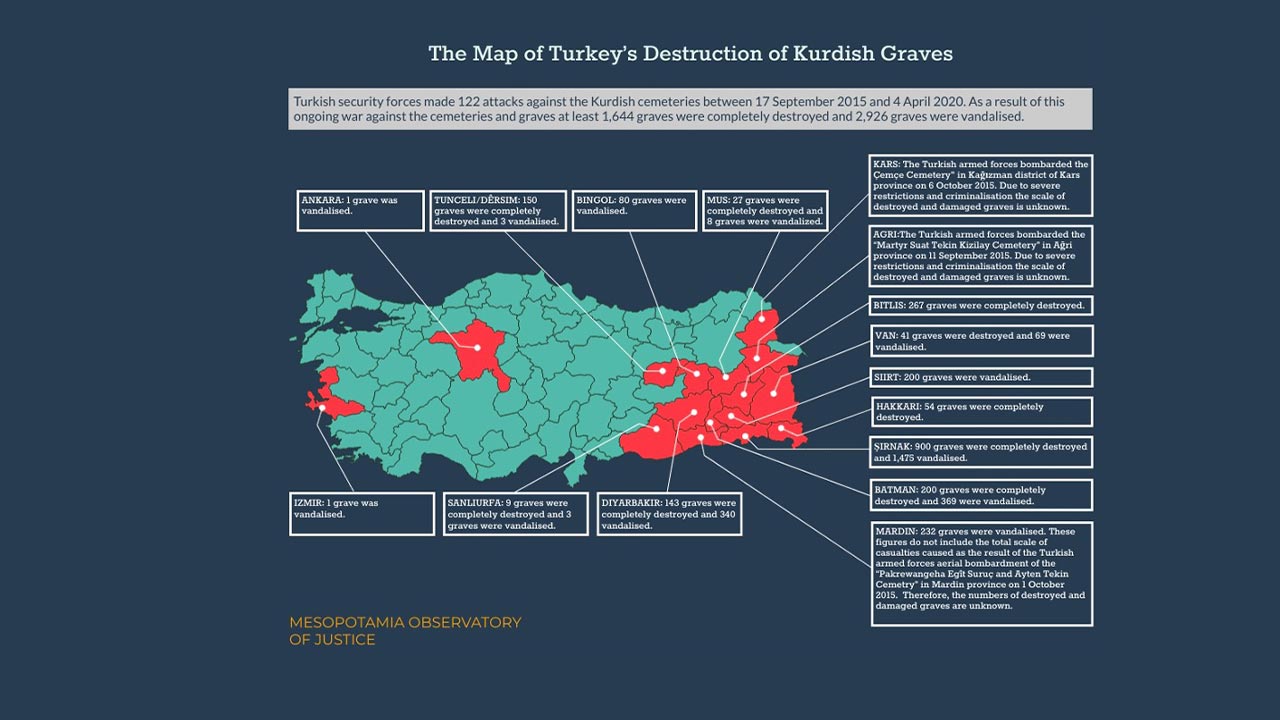 The findings of the report reveal that publicly accessible information indicates that Turkish security forces carried out 122 attacks against Kurdish cemeteries between 17 September 2015 and 4 April 2020, and that as a result of these acts of destruction, at least 1,644 graves were completely destroyed and 2,926 were vandalised and damaged.

The remains of 261 persons were removed from Garzan cemetery in Bitlis in 2017, kept for months at the Istanbul Forensic Medicine Institute, and eventually buried secretly in boxes under a pavement in Kilyos, Istanbul. The bones of two people, Cengiz Demir and Hüseyin Döner were later handed to their families after DNA matching.

The report by Nejbir concludes that “it is evident that security forces identified the locations of cemeteries where the fallen PKK warriors rested in the rural areas of the Kurdish region in a systematic manner and destroyed them, either with aerial bombardment or explosives.”

In official statements, such acts of destruction were described as ‘destruction of so-called martyrdoms’, and it was usually claimed that buildings and walls which bore the symbols of the Kurdistan Worker’s Party (PKK) were destroyed while the graves were untouched.

In a report by the local newspaper Politik Kars, it’s said that the “Çemçe Martyrs’ Cemetery was bombed with war planes and helicopters” and that local sources reported that “following the bombardment the military troops dispatched to the region destroyed the graveyard’s walls and the graves.”

The cited official statement, however, claimed that the graves were untouched.

Whereas, pictures on the source referred to, the web page of Kars governerate, proudly showed the cemetery razed to the ground.

Forcing families to vandalise graves of their own kin

The report also notes that public cemeteries were targeted in the same way, and the families of deceased fighters were forced to destroy the graves of their own relatives.

On 24 April 2020, Diyarbakır Silvan District Gendarmerie Command reportedly forced the families of PKK members killed in clashes to break up the gravestones of their relatives and delete the Kurdish letters X, W and Q, not present in the Turkish alphabet, from the gravestones. The gendarme commander is reported to have told the families that if they did not do this, the gendarmes would ‘uproot the graves’. He also demanded that families send him photographs of the smashed gravestones’.

“The Erdoğan regime has institutionalized widespread and systematic attacks on Kurdish cemeteries and graves as part of his regime’s psychological warfare strategy to demoralise and humiliate Kurds so that ‘they’ – as ‘othered’ peoples – can be taught a lesson and ‘obedience’ can be secured through such criminal actions.”