And why would a Kurdish party like the KDP tie its fate to Ankara, enemy of the Kurds, during such a critical time for Kurds? It is not very complicated from the KDP’s side, as KDP no longer has a Kurdish vision. It is a dynasty of one family, writes Amed Dicle as he explains the history, context and details of the present military operation of the Turkish state into Iraqi Kurdistan named Operation Claw-Lock.

The Turkish army launched a new invasion and military operation on the Zap region of Iraqi Kurdistan on 17 April. Operation Claw-Lock is the most extensive of it’s kind in recent years, and the most dangerous in terms of its political goals.

Ankara put this new warfare concept in motion from 2016 onwards, and preparations for this were conducted in 2013 and 2014. The October National Security Council (MGK) meeting in 2014 sealed the deal for the so-called Collapse Plan – documents on this have been published regarding the plan.

The state officials who held the İmralı talks with Kurdistan Workers’ Party (PKK) leader Abdullah Öcalan signed off on this plan. Among them was the public security undersecretary at the time.

That is to say, as the so called “dialogues for a solution” continued with Öcalan, Turkey was stalling while making preparations for an extensive war. 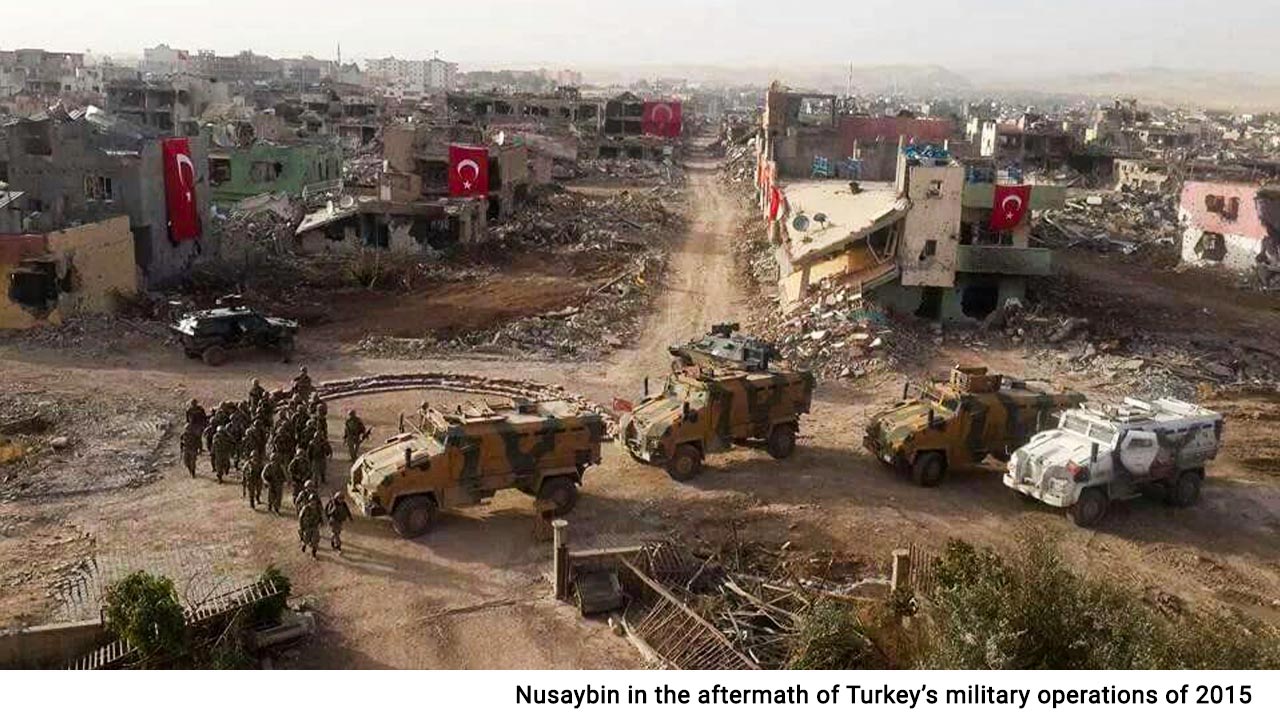 As required by the concept, a wave of attacks began against Kurds within Turkey’s borders. Whole cities were destroyed, thousands of political actors were imprisoned. The first invasion attack on Rojava then followed suit. Afrin, Tel Abyad and Serekaniye were invaded. In tandem, attacks launched against Iraqi Kurdistan.

However, the back-to-back attacks from 2019 onwards did not fully achieve their goals. Turkish forces conducted intense bombardments and dispatched troops to various areas, but they could not take over to the extent that they wished.

Turkish troops faced a devastating defeat in Gare in February 2021. Attacks then spread to other areas on 24 April, but those were not satisfactory either. Guerrilla forces had carved another mountain beneath the mountain, and did not allow Turkish soldiers to set up positions.

That was when the Turkish state employed the Kurdistan Democratic Party (KDP), who head the regional government. The PKK in response accelerated diplomatic efforts to ensure KDP would not act in tandem with Ankara. PKK top official Murat Karayılan told Kurdish television Stêrk TV that he had recently sent a letter to Masoud Barzani, the former president of the Kurdistan Regional Government, but received no answer towards finding a solution. 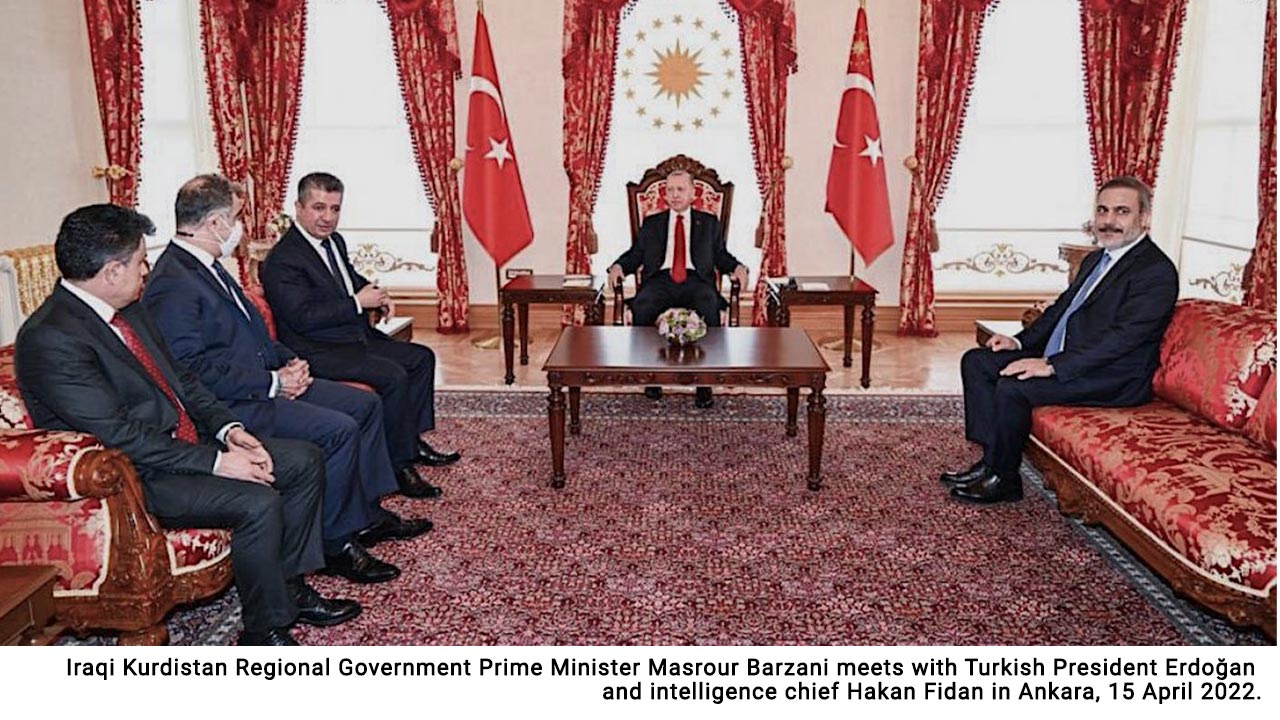 Eventually KDP chose Turkey, and joined the operation directly. On 15 April, KRG Prime Minister Masrour Barzani met with Turkish President Recep Tayyip Erdoğan and head of Turkish intelligence Hakan Fidan in Istanbul, in an open declaration of his allegiance. What immediately followed, on 17 April, was the current operations.

The concept of this attack is Turkey taking the fight to the Kurds’ doorstep. By waging war on Kurds outside its borders, Ankara aims to both increase pressure domestically, and become a permanent fixture in the invaded areas. 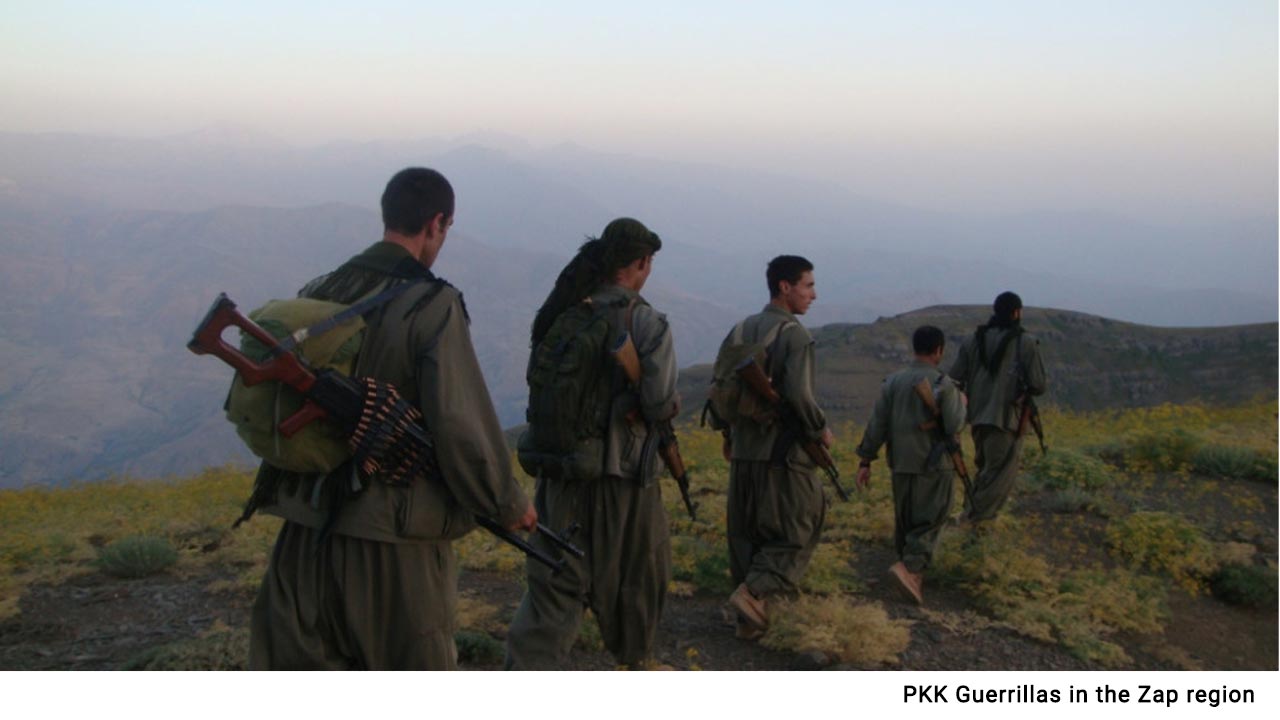 The areas targeted in the operation are places where the PKK has held bases for some 30 years. The Zap region has wide swathes of land, tall mountains, and deep valleys. It is an area up to 20 km away from the Turkish border. The particular importance of this area is that it joins together all areas the PKK manoeuvres in. It physically connects PKK guerrillas in Turkey and in Iraqi Kurdistan, that is why Turkey wants to occupy this area and cut off this connection.

The operation is named Claw-Lock, and aims to put the lock on the guerrillas’ ability to manoeuvre. However, it must be said that the PKK has been in the area for 30 years, and it has significant preparations in place. It has control of the land, and as such, it would seem that Turkish forces would not be able to achieve their goals with ease. The back-to-back constant stream of news of casualties in recent days is a sign that Turkish troops have yet to set up permanent bases in the area.

The KDP is also playing a key role in the operation’s target areas. For instance, intense clashes continue on Mount Kurejaro, 19 km from the border. Turkish troops cannot directly get to the area from their side of it, but troops have been dispatched via the highway between the Habur Border Gate and Zaxo. This road is controlled by the KDP. Turkish soldiers used this route to attack the guerrilla from behind. That was a new method, and gave the Turkish side an advantage. In the current situation, this is as far as they can advance, and they are in constant clashes with the guerrilla there.

Turkey’s long-term strategy involves the elimination of all gains by the Kurds, including the semi-autonomous status in Iraq. But the first and most important path to defeating the Kurds is to eliminate the PKK.

Ankara wants to block the PKK – to ‘lock it up’, in their own words. In the long-term, they want to take control of the area up to Mosul and Kirkuk. If that comes to pass, it will be hard for Kurds to recover. As such, they want to use the PKK as an excuse to invade Kurdish lands bit by bit.

That is why there are also attacks on Rojava, to create a ‘Turkish corridor’ from Afrin to the Iranian border, expand their borders and to put pressure on Kurds. They aim to weaken the PKK to smother Rojava via military, political and economic ways. It is difficult, almost impossible for them to succeed, as there is a tremendous Kurdish resistance. But the Turkish regime considers the existence of Kurds as a threat its own destruction. So, it attacks brazenly.

And why would a Kurdish party like the KDP tie its fate to Ankara, enemy of the Kurds, during such a critical time for Kurds? It is not very complicated from the KDP’s side, as KDP no longer has a Kurdish vision. It is a dynasty of one family. All their priority is with keeping the Barzani dynasty going. Kurdistan and ‘Kurdishness’ is a bargaining chip for this family, and a way to remain in power.

The only relationship the Barzani family enters into with Turkey is for their own dynasty. However, Ankara does not even acknowledge that. They only pretend to, so they can use this shortcoming by the Barzani family against other Kurds.

They do not have a relationship of equals. They are master and servant. No healthy outcome can be found in such out-of-balance relations.

The Barzanis believe the PKK is a threat. In fact, they believe anybody who is not them is a threat. They have ruled over the region for 30 years. They have handed over the status that Kurds won by the sacrifice of their lives to the interests of their family. All the votes they won in the region, some 328,000 votes, amount to less than what the Kurdish movement wins in one district in Istanbul in Turkey.

They think that the PKK’s women- and society-focused system is a threat to themselves, and thus they are used by Turkey in operations. In a sense, the Barzanis and Ankara use each other against PKK and Kurds. Barzanis have built themselves up on top of the Kurds’ blood. They see Kurds as a potential threat. They wish to take Ankara’s support behind them and continue to rule over Kurds.

KDP can no longer walk back from this situation. And the Turkish state will increase its attacks. Harsher fighting is expected for Zap, Metina and Avaşîn areas throughout the summer. Turkey will invade these areas, and then they will wish to move towards Gare and others. A pushback would foil this concept.

Next year there is an election in Turkey. The government wishes to face the election under bloodshed. That is why Turkish troops are so dogged in their invasion attack. Ankara believes it has an advantage in the international arena due to the situation in Ukraine, which is not entirely false.

Currently, Kurdish interests are not high on the agenda in Moscow or Washington.

Erdoğan has set up an equation of death. If he kills PKK militants, he will present it as a victory to his base, while also using the soldiers who died to stoke up nationalist/racist sentiment in the same constituencies. In short, the president is capable of deriving political profit from both dying and killing. And the circumstances are ripe for it.

If they achieve the results they wish in this operation, they will also target Rojava in the autumn. Military and diplomatic preparations are underway for that. Washington’s and Moscow’s reactions will be assessed when the time comes. Military activity continues at the border.

Meanwhile, the KDP has increased the number of military outposts along the border between Iraqi Kurdistan and Rojava to 66. Erdoğan has met with Saudi Arabia to ask for financial support, and he wants to use Riyadh’s influence on Rojava’s Arab population. Turkey also wants to talk with Egypt, and lay the groundwork to avoid reactions from the Arab world against a possible invasion.

Kurdish actors are surprisingly resilient, and the Kurdish cause has created an unbeatable spirit and organisation. Despite the incredible imbalance in power, Ankara cannot defeat the Kurds. On the contrary, economic ruin and moral decay have struck Ankara in the heart. Kurds do pay a heavy price, but they are not letting the Turkish regime through. Kurds are going through a dark and difficult tunnel, and there is no other way but reach that light at the end of it.