Kurdish women signalled that in the upcoming period, their resistance will intensify and they will "not bow down" to the "practices of the special war".

Amid increasing repression of Kurdish women activists and politicians, Diyarbakır (Amed) – also known as the heartland of the Kurds in Turkey – witnessed a massive women’s rally.

On Thursday evening, women in Turkey’s southeastern city of Diyarbakır gathered for a a massive rally to mark the occasion of the International Day to Combat Violence against Women, Jin News reported.

Police attempts to ban the march

As the women planned to march to Rojava Park, the police, who had taken extra-ordinary measures, only allowed them to march over a shorter distance. 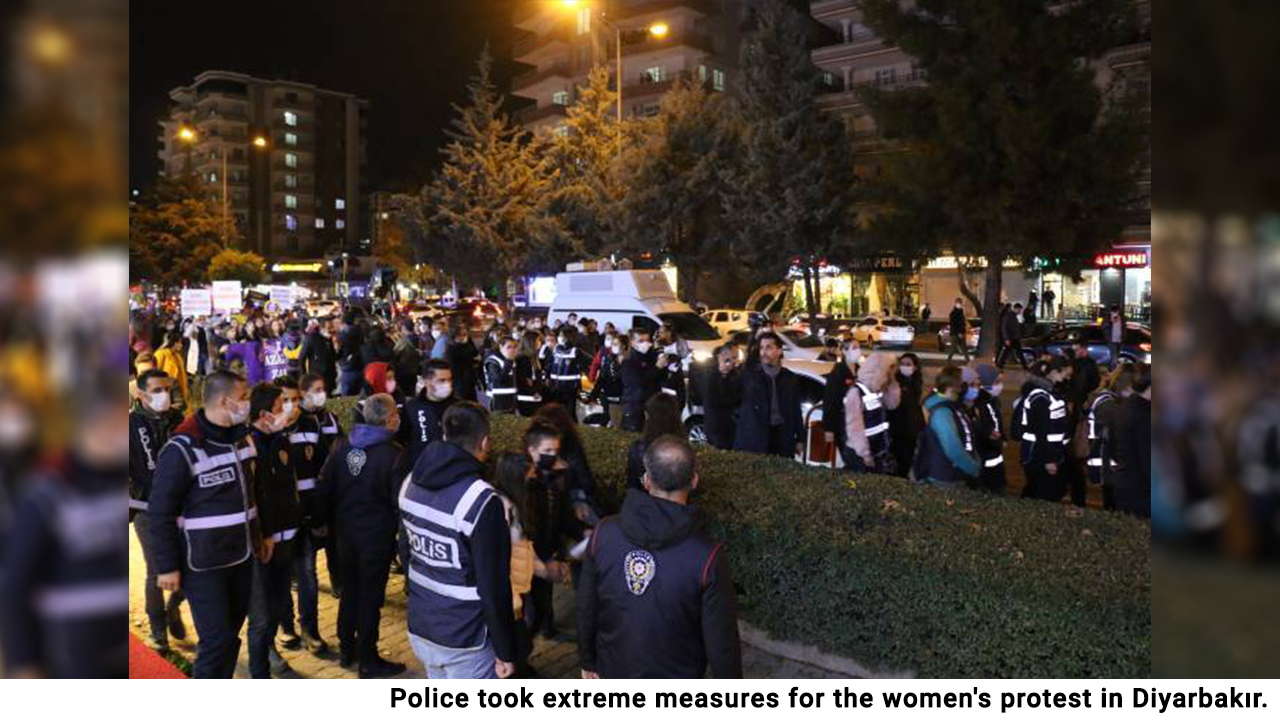 Police attempted to blockade the women who were showing the main banner of the protest, which in Kurdish and Turkish read, “It is time for women’s freedom” and used the banner statement as grounds for a ban. When the women insisted on continuing with their march, the police physically attacked them.

After a skirmish with the police, the women succeeded in continuing with their march.

Gülistan Atasoy, the co-chair of the Peoples’ Democratic Party’s (HDP’s) Diyarbakır Office, in a speech stated, “We are here, against the war, to demand equality and freedom. We are here to carry the voices of Gültan Kışanak, Sebahat Tuncel, Leyla Güven, Ayşe Gökkan, Gönül Erdenler and of all women, who were imprisoned on political grounds.” 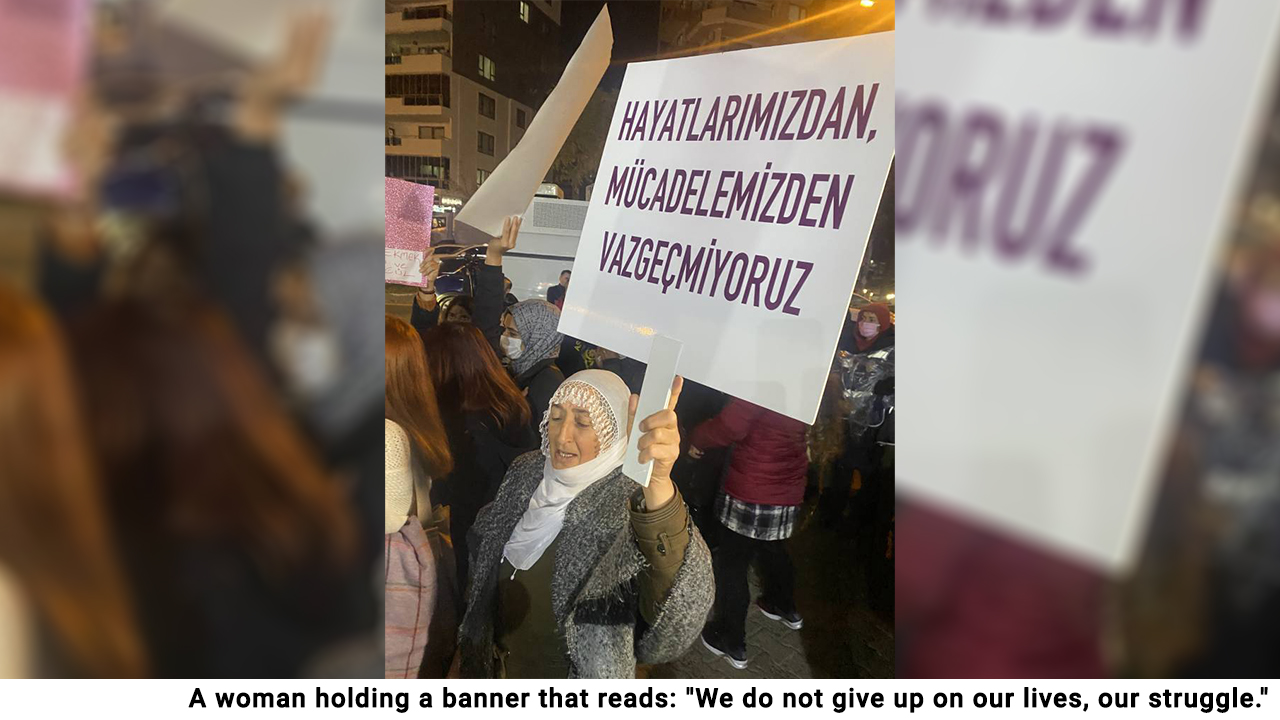 After her speech, the women issued their press statement, which reflected a significant stance not only against the increasing violence against women in Turkey, but also against what they called “special war practices,” referring to the colonialist and assimilative practices targeting especially the Kurdish women in Turkey’s southeast, conducted by the Turkish government and Turkey’s military forces.

“In Kurdistan, they have been applying practices of ‘special war’ and ‘assimilation,’ carried out by the hand of the system and aiming to force the surrender of the will of the women and the youth,” the women’s protest organisers announced.

“Various types of violence target the body, the language, the identity of women: basically, the very existence of women. These actions have been carried out by state officials who have almost turned into gangsters.”

A woman holding a banner that reads: “We do not give up on our lives, our struggle.” 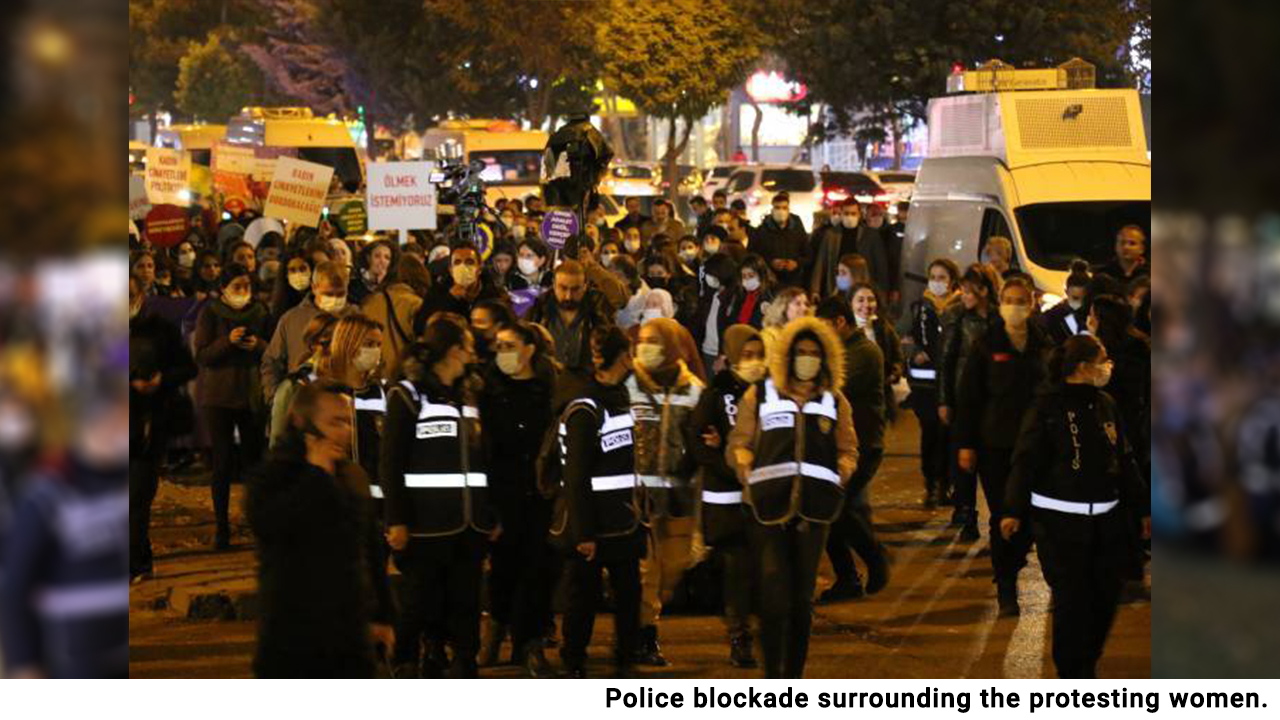 The women also shared their reactions against the ‘trustees’ that have been appointed to replace the posts of the elected Kurdish mayors in Kurdish-majority provinces. Theorganisers of the women’s march stated that this system, based on trustees, has been used to attack the equal participation of women in politics, by disabling the co-chairpersonship system and forcing women to work under male mayors.

The women provided a clear “anti-war” message, demanding peace and a resolution to the ‘Kurdish question’ and they also demanded that Turkey returns back to the Istanbul Convention. They also demanded an end to the practices of ‘special war’ and ‘impunity policies’ by the perpetrators, whether civilian or state officers, and demanded that they be punished for their acts of violence against women, children, LGBTI and refugees. 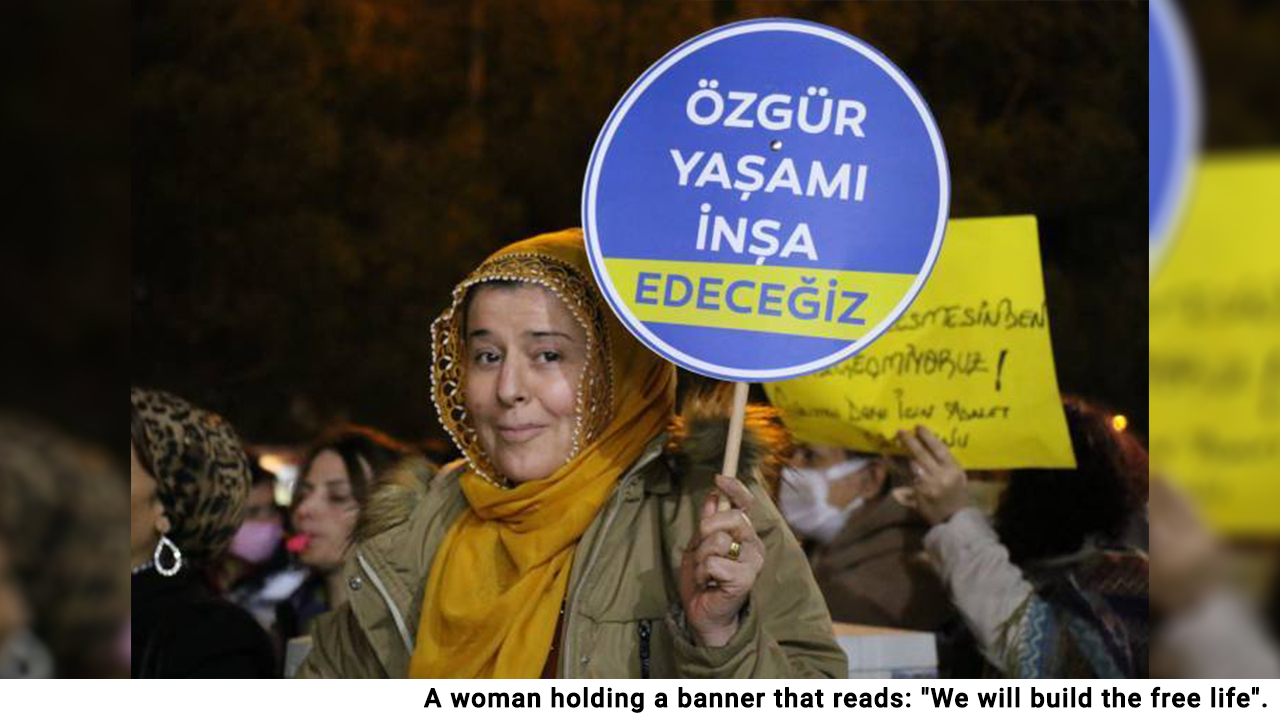 ‘We will not bow down’

“Let them see today how the Kurdish women continue their struggle,” Saliha Aydeniz, the co-chair of the pro-Kurdish Democratic Regions Party (DBP) said, after the press release was issued.

“This struggle handed over to us by the Mirabel sisters, Sakine [Cansız], Hevrin Khalaf, Arin Mirkan and many other women will never end. They have always tried to shut women up, but they failed,” she said.

“We will not bow down,” Aydeniz concluded. “You will not be able to block women’s stand and women’s freedom.”