When work started at a stone quarry in the Horgow village of Iğdır, it quickly became a nightmare for the Kurdish locals as dust from the quarry filled the air and turned the sky grey.

Suveren (Horgow) village, 15 km from the Kurdish majority city of Iğdır in eastern Turkey, is being smothered by dust pollution from a nearby stone quarry, MA reports.

The owner of the quarry, Abdulcebbar Baştemur is a representative of the New World (Yeni Dunya) Foundation, which is known for its close ties with Turkish president Erdoğan’s Justice and Development Party (AKP). The stone quarry went into operation in 2015.

It is reported that the Ministry of Environment and Urbanisation issued a decision that “no environmental impact assessment is necessary” in response to an application relating to increase its capacity”. Following this the quarry went into operation.

When the Turkish authorities failed to see the incredibly negative impact of the quarry on the environment, the Kurdish villagers living in Horgow reported the pollution caused by the facility, but the authorities took no notice. 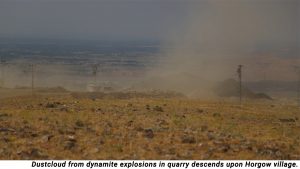 The dustcloud from the dynamite explosions in the quarry site decends on the village and turns the sky grey, making it impossible for the villagers to take a breath of clean air.

Mehmet Köseme, a resident of Horgow, said that they do not want the quarry and that chronic diseases have increased in the village over the last six years since the quarry began operating.

“The dustcloud has enveloped the village since the quarry was opened and people and animals are dying because of this. Our animals go blind and people struggle to breathe due to the fine dust everywhere,” he said. 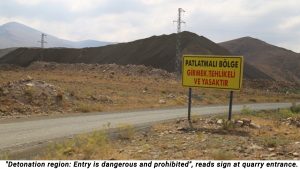 Ayşan Akbulut claimed that hundreds of sheep have died because of the dust from the quarry. “Since the site opened up, many diseases have begun to emerge in our village. When the wind brings the dust over, we can’t see the ends of our noses,” she said.

“We can’t leave our windows or doors open. The village has become like a prison for us. We can’t even hang our clothes out to dry.”

Ali Yalçın, another resident of Horgow, cricitised the owners of the quarries for endangering public health for the sake of personal profit.

“If they had to live in this village themselves they would take measures against the dust. We cannot graze our animals anywhere near the quarry site because of it,” he said.