Turkey: Remains of Kurdish fighter shipped to his family in a ‘cargo box’

The family of a Kurdish fighter who lost his life in the decades-long war with the Turkish state had to wait for three years to receive his remains, only to have it delivered in a cargo box, sent by the Post Office.

In June 2018, Mahsum Aslan, a young Kurdish fighter, lost his life in Mount Kırmızı in Dersim during an air-strike by the Turkish armed forces. Like many other families of Kurdish fighters, the Aslan family had not been able to receive the remains of their son as the state denied them the right to organise a proper burial.

Three years after the Aslan family had provided DNA samples to identify Mahsum, they were informed that the DNA matched. With the results of the DNA testing, which the family waited for years, they applied to the prosecutor to retrieve the remains of Mahsum, but the authorities assured them that they would make sure the remains would be sent to them and they should wait.

On 2 August, the authorities in Ergani Police Department called the Aslan family, telling them they could retrieve Mahsum’s remains there, according to Jin News.

Upon their arrival to Ergani, the family learned the bitter truth that the remains of Mahsum had been shipped to them as “cargo.”

The Aslan family dressed this plastic cargo box with a burial robe in order to accord Mahsum a funeral ritual based on their religious customs and finally sent him to his eternal rest on 2 August in the village of Yayvantepe, in Ergani, Diyarbakır (Amed).

All family members of the Aslan family had to provide finger prints to the police, an application that is far from being an ordinary procedure in Turkey, as no Turkish citizen is asked for their finger prints before they receive the remains of their loved ones, except for the families of the Kurdish fighters, who have often been subjected to ‘punishment-styled violations’ even after their loved ones lost their lives.

The security officials also made it clear to the family that they should not announce the burial publicly. 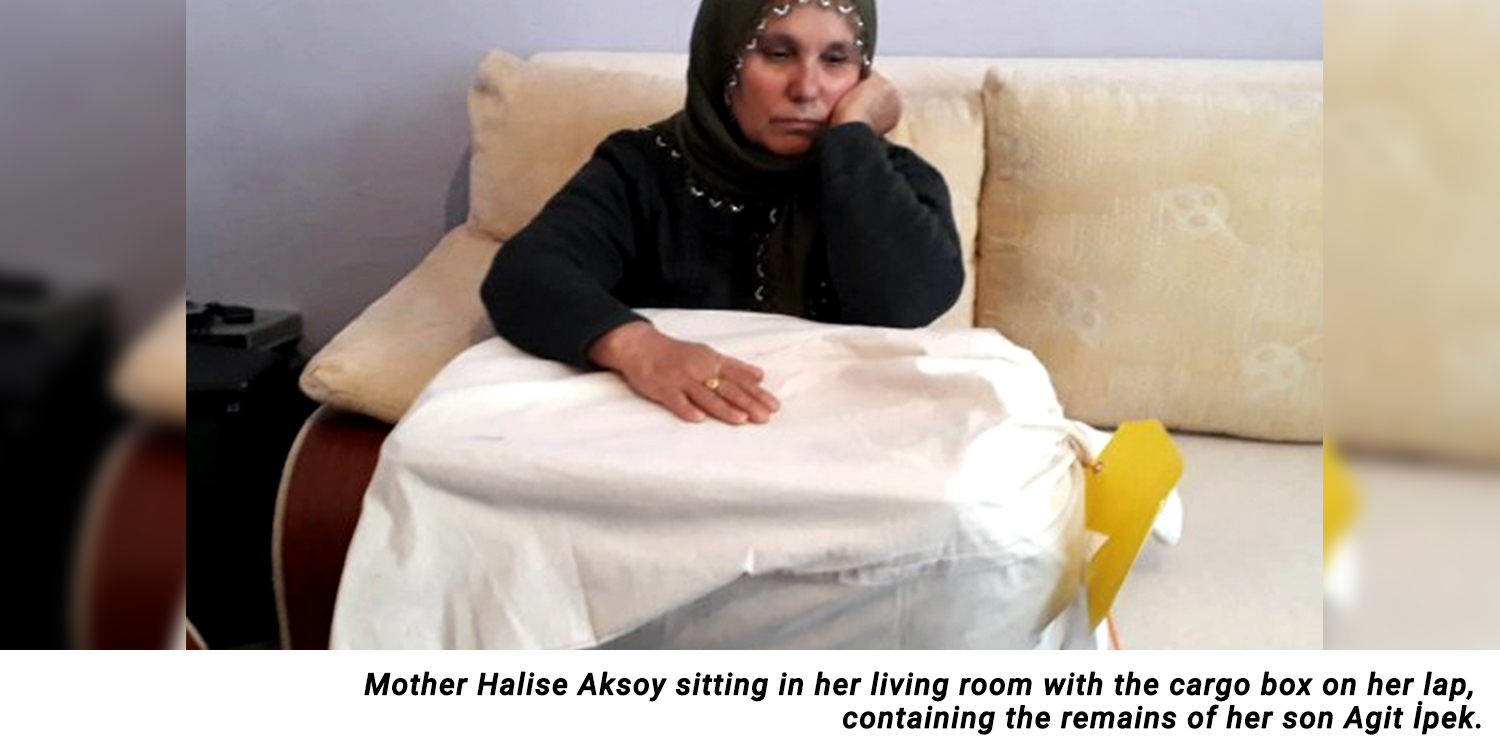 This is not the first time a Kurdish family has received the remains of their loved ones in a cargo box. The remains of Agit İpek, who lost his life in a clash with Turkish armed forces in Dersim on 23 May 2017, was also returned to his family on 10 April 2020 in a little, rectangular cargo box tagged with a yellow Post Office label.

Images of mother Halise Aksoy, sitting in her living room with the cargo box on her lap, has been carved into the memories of many, and it triggered a massive public outcry.