Emine Şenyaşar and Ferit Şenyaşar, who have been demanding justice for their murdered family members with the peaceful sit-in vigil that they launched in front of a courthouse in Urfa, SE Turkey, were moved from outside the courthouse by force as the police intervened in their peaceful protest, Mesopotamia Agency reports.

Emine Şenyaşar and her son Ferit Şenyaşar have been on a sit-in vigil for 24 days in Turkey’s Urfa (Riha) province to demand justice for their family members, who were murdered by the the bodyguards of the Justice and Development Party (AKP) MP Halil Yıldız.

As the sit-in vigil continued in front of the Urfa Court House, police intervened to the peaceful vigil of Emine and Ferit Şenyaşar

Ferit Şenyaşar lost consciousness during the moment the police targeted him and his mother.

The family was asked to leave the courthouse and told to never to return back anywhere “near the Courthouse building”.

As Emine and Ferit Şenyaşar continued to raise their demand to continue their peaceful sit-in and stated a number of times that they do not “harm anyone” and “just want to make their voices heard by the legal authorities,” the police forced the family leave.

When Ferit Şenyaşar did not accept the imposition, he was physically attacked by the police that caused him to lose consciousness.

During the attack, he was reportedly hit on his head and fainted after having a nervous breakdown.

Ferit Şenyaşar was taken to a hospital, according to MA. 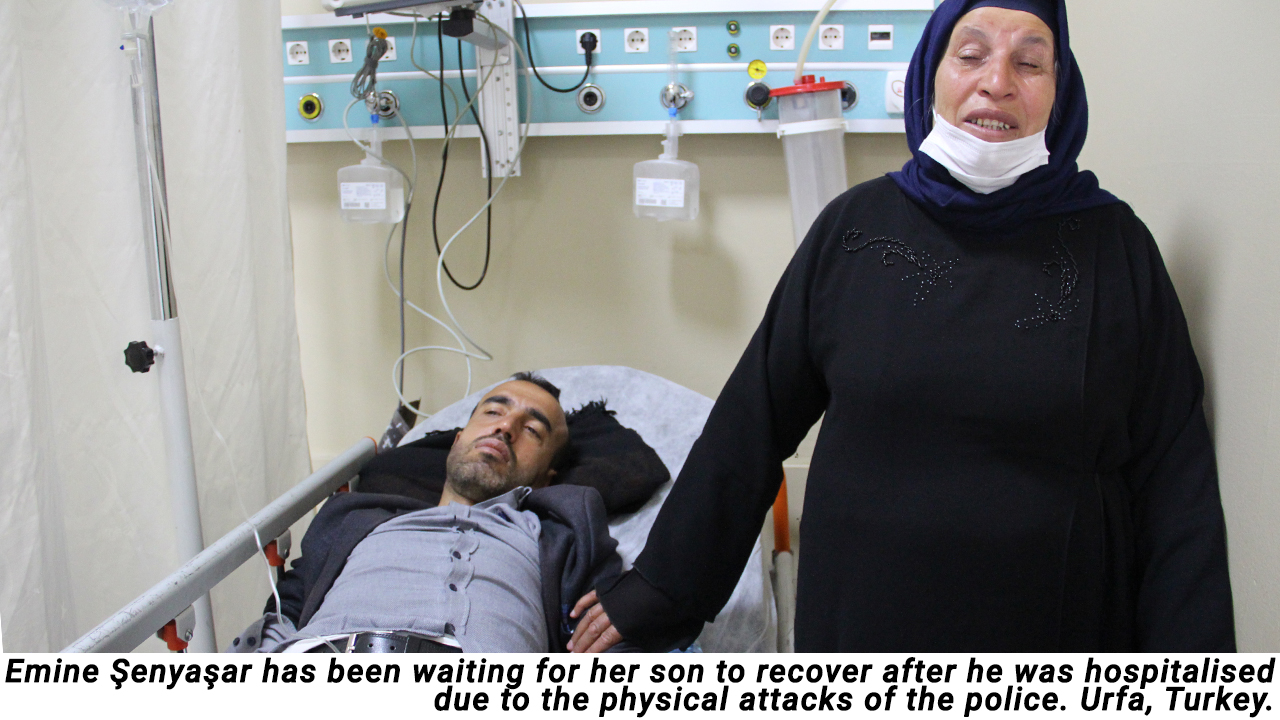 “Where shall we go, where shall we seek justice? What do you want from us? Why don’t you arrest the killers?” Emine Şenyaşar said, exasperated and in tears.

Meanwhile, the police prevented the reporters of Jinnews and Mesopotamia Agency from recording the moments of attack and dispute.

One police officer threatened the journalists by saying, “If I see a photo or image about this incident, I will detain you.”

Emine Şenyaşar: They tried to kill us

Emine Şenyaşar spoke to MA after the attack.

“A policeman ran towards us and he grabbed Ferit’s neck and began to strangle him. He was trying to choke him. Ferit tried to protect himself, but then 4 policemen attacked him all together. They began to drag him on the ground. He had a crisis on the ground and was not able to breathe properly. Then they (the police) began to kick him. I cried and called out for help. I called out, ‘Call an ambulance’. They did not call an ambulance but continued to kick him on the ground for a few more minutes,” Emine Şenyaşar said.